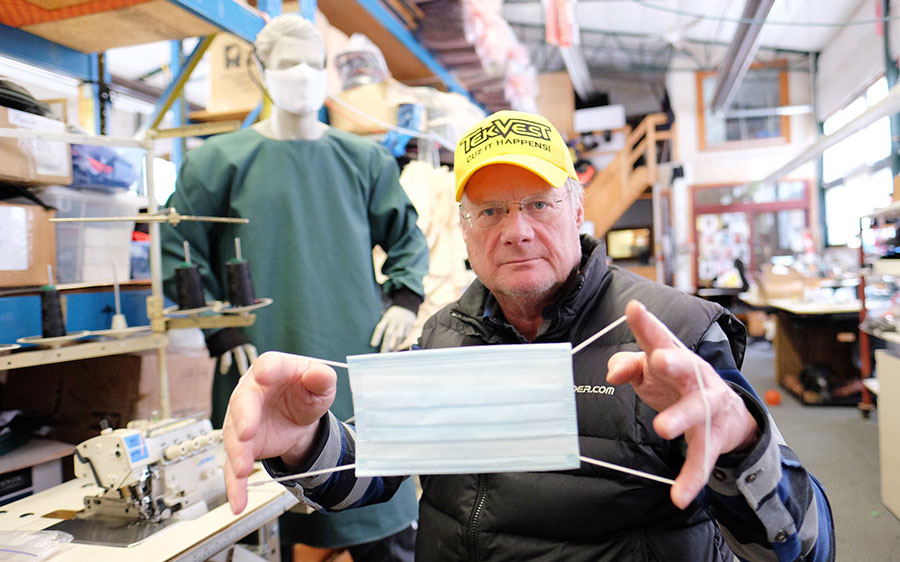 Gearing up for masks

Tekrider, near Minden, Ontario, was opened 24 years ago to produce safety gear for snowmobilers, and its main product is the Tekvest. Steve Brand, who had been involved in snowmobile racing for years, had worked at Bombardier, and had served tours in Sierra Leone and Afghanistan as a Reservist with the Canadian Forces, is the company owner. When the pandemic hit and as a non-essential service he was forced to shut down, he realized that it would not be hard to convert his operation to make personal protective equipment for use by health-care workers and others. Tekrider’s staff of about 20 was already cutting and sewing materials for the Tekvest, so converting to the production of masks and gowns and other health-care protective equipment was a natural move. “For 24 years we’ve been making personal protective equipment for dirt and snow,” he said. “Now we’re making it for health-care workers.”

Before he could do that, there was a monumental roadblock to get over. In order to get to work again, even on PPE for the health-care industry, Tekrider would have to be declared an essential service, and getting that done was a tough go. Finally, he talked to a local politician, a county warden, who wrote a letter to the Ontario government describing the local need for this kind of PPE and the role Tekrider could play in providing a solution. Essential service status was granted.

Brand was able to bring 12 of his employees back to work (a few others declined to return because of other obligations) and start producing masks and other PPE. The masks are double-layer cotton, can be washed daily, and are non-medical, so a doctor, for instance, would not use them (Brand said some medical personnel are using them over their N-95 masks), but for retirement homes and other facilities where the virus is more of a risk, they can help prevent the spread of the disease that the virus causes.

Brand went to Toronto to buy two sewing machines to get the operation started, and Tekrider’s computer was programmed to cut material for masks. When we talked to him on April 23, he was on his way to buy an eighth sewing machine in order to boost output. But while with the computer-aided cutting tools he can cut material for 2,500 masks a day, his staff can’t possibly sew that many in a day. The additional sewing machine will help, but in order to get the output that he wants, he’s looked into hiring people in the community to sew them. He provides the kits with cut material and drawstrings, and they sew, for a small amount of money for each one completed. He had 20 community workers when we talked and he said he could use more. He could also use more experienced workers in the Tekrider shop.

He said he had shipped a couple of thousand finished masks and a thousand gowns, which were more in demand than masks. He is also making booties and caps, and all those products are being sold at not much more than cost. There’s no profit for Brand or Tekrider in this, though he admitted the gloss on his company’s reputation might be valuable after the corona virus has been laid to rest. But re-tooling for all this was money out of Brand’s pocket.

Tekrider is selling masks for about $10 plus shipping, and less than that for health-care workers.