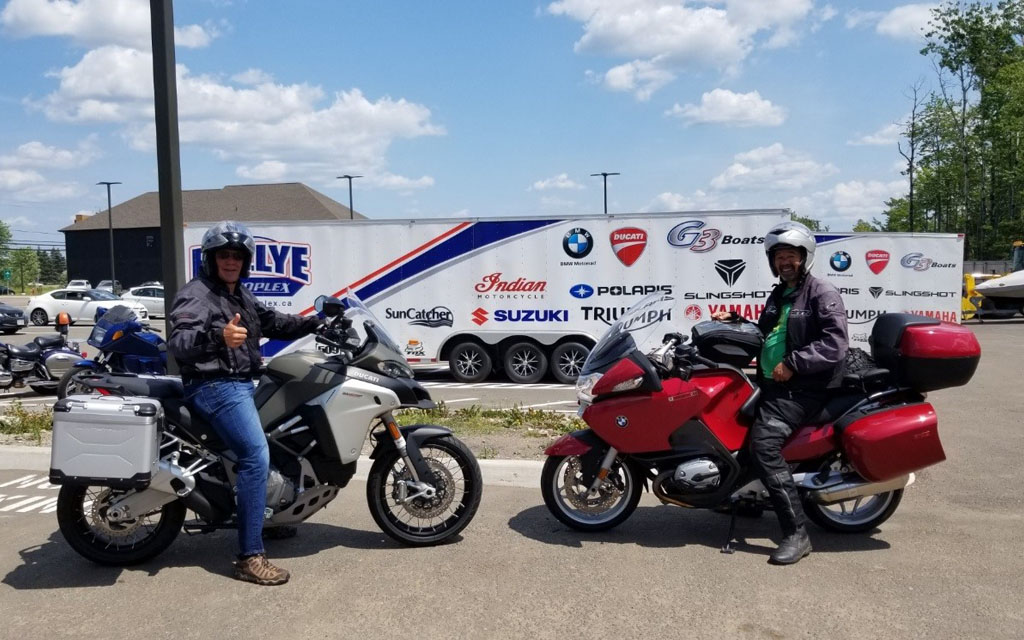 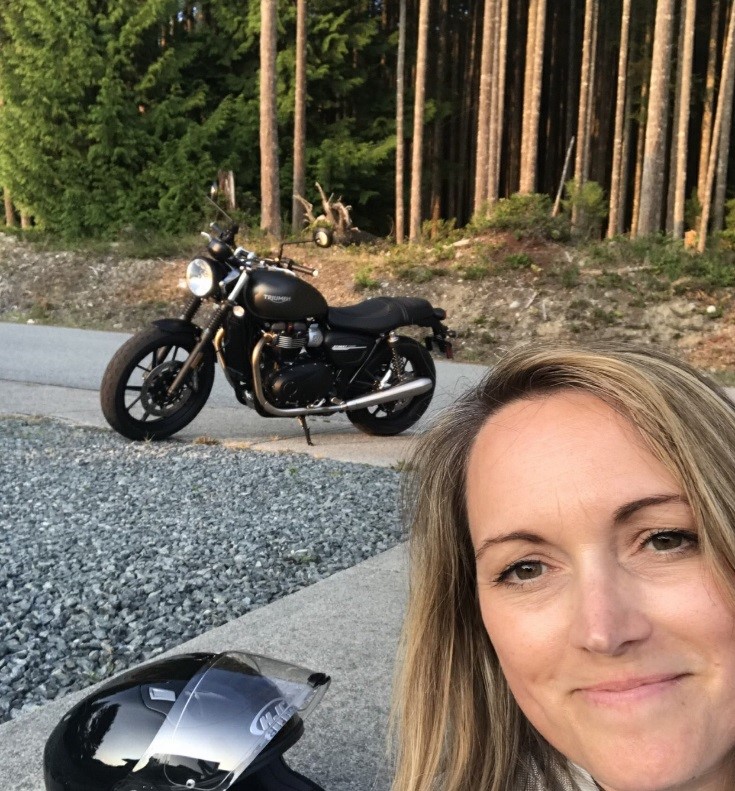 In the summer of 2019, my good friend Julie, who lives on B.C.’s Sunshine Coast, followed her life-long dream of getting her bike license and bought a new Triumph Street twin.

I wanted to see Julie’s bike in person, but it was impossible since I live in Fredericton, NB. So I stopped in at the only Triumph dealership in Atlantic Canada, Rallye Motoplex in Moncton. Into my fourth year of owning a red 2006 BMW R1200RT, and loving all 60,000 kilometres I’d ridden on it, I wanted to see what the dealership had. There, I was introduced to Bre, a pleasant, no-pressure salesperson.

First on the agenda was to look at and sit on an almost identical bike to Julie’s. Then, I looked at their BMW, Triumph, Yamaha and Ducati selection. They had two Multistrada 1200 Enduros in stock and both were 2016 models and significantly reduced in price.

After a lot of research and establishing that Ducati had made an incredible ADV bike worthy of the Ducati name, and a worthy competitor to the R1200GS, I returned to the dealership to try it out. Well, I think I expected it to be as comfortable on the road as the RT and was somewhat disappointed. Back home I did more research to see what I had missed, considering the rave reviews of the bike. My expectations were unrealistic, I think. It was not a sport-touring bike, so why should it feel like one?

Knowing (or convincing myself and my wife) that I would never have another buying opportunity like this one, and having contemplated getting into the ADV segment for a while, I decided to take a chance on it, though still with reservations.

I was better off selling the RT than trading it in, but in mid-summer, there was a risk to that as well. I really did not want to have the RT sitting still for months while I tried to sell it and rode the Ducati on a daily basis.

Then came a few days of fine negotiations with the dealer, with little progress. Again, parting ways with the RT was not high on my priority list and including some sort of warranty was not on the dealer’s priority list. The Ducati two-year warranty had expired as the bike, although brand new and only having 20 kms on it, was registered through Ducati as a demo. The best they could do was a one-year (third party) warranty. They did make a few concessions on the price of accessories (crash bars and top box), but not enough. I was ready to walk away, thinking it was not meant to be. And then I met Peter.

An unassuming tall and gentle man with the looks, charm and calm demeanor of Morgan Freeman, Peter was travelling through Atlantic Canada with two friends when his bike, a black 2006 R1200RT with 240,000 km on it, left him stranded in Moncton. The drive shaft, a $1,400 BMW part, broke and a new one would take over a week to arrive. Buying another bike was an option but when you are looking for something very specific in an emergency, it can be hard to find. Call it fate or coincidence, but Peter met Bre at the BMW/Ducati dealership and Bre was sharp enough to make the connection that he might be interested in my RT.

With a mutually agreed upon price and an immediate buyer, the dealer could (on paper) take mine in on trade, instantly selling it to Peter, which put him back on the road, saved me enough on taxes to sweeten the Ducati deal; and looked after my warranty. Adding to the coincidence was the fact that both Peter and I had the BMW top box and the tank bag, the latter of which I had never used but was necessary for him. His was well worn. Peter and I hit it off and we have kept in touch. When the deal closed on the Saturday of the August long weekend, we headed off in two different directions from Rallye Motoplex. Bre even took a few parting photos.

Meanwhile, the story continues as Bre, who has a passion for motorcycles and has owned several, can do most repairs on them. He brought Peter’s bike to his home, took it apart, and had no luck finding a used drive shaft for it, but on eBay I found a gently used one in the US at less than a third of the cost of a new one. I delivered it to Bre, who finished repairing Peter’s bike and sold it privately.

Since the bike musical ride occurred and the stars aligned for Peter and me, although I still at times miss the RT, I have adapted to the Ducati, upgraded the windscreen with a Touratech and installed the crash bars and top box. I love every second of riding it. It is an absolute engineering and electronic marvel. Peter’s friends had continued on their journey as he dealt with his situation in Moncton. He caught up to them in PEI, finished his trip and headed back to Huntsville. He updated me on his voyage and on how much he was enjoying his new red rocket. Julie, knowing (and feeling “somewhat responsible” as she puts it) that I bought the Ducati and sold the RT, keeps on riding and gets better at it during every ride. It is her newfound interest, fun and much overdue passion. Little did she know that her decision would have a domino effect at the other end of the country, which led to a drastic change in bikes for me, and an almost perfect scenario for Peter after his misfortune.