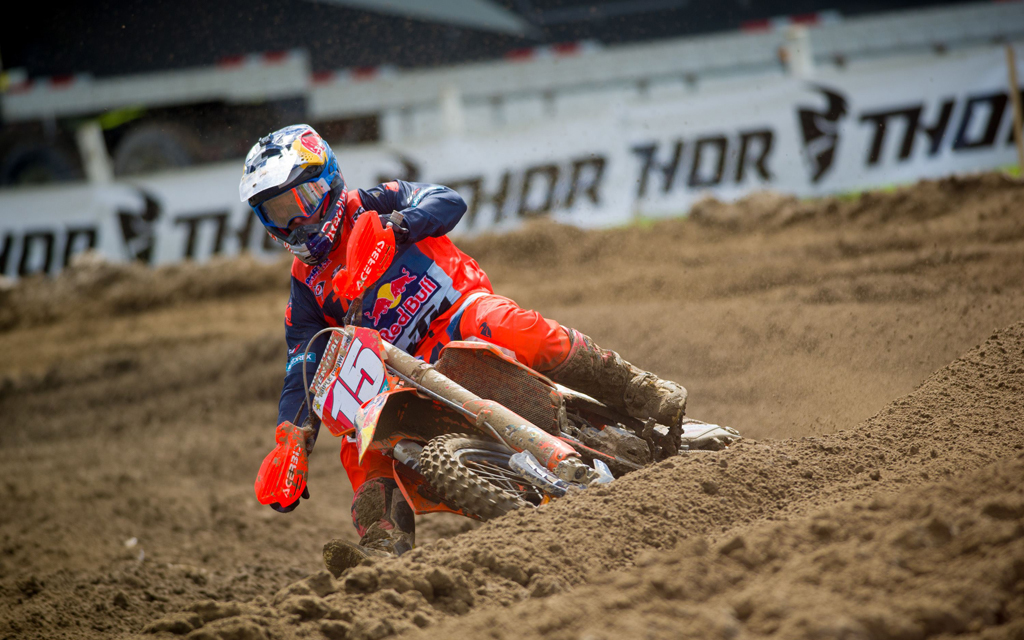 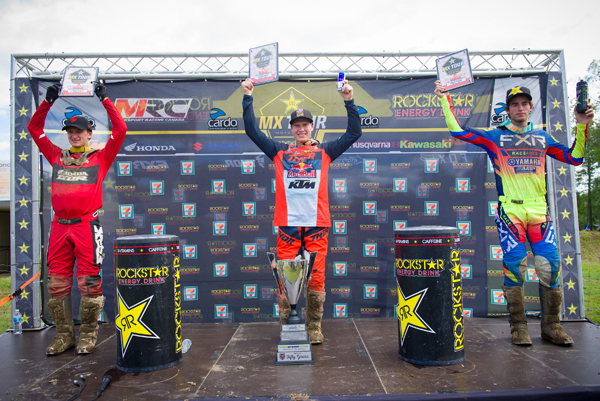 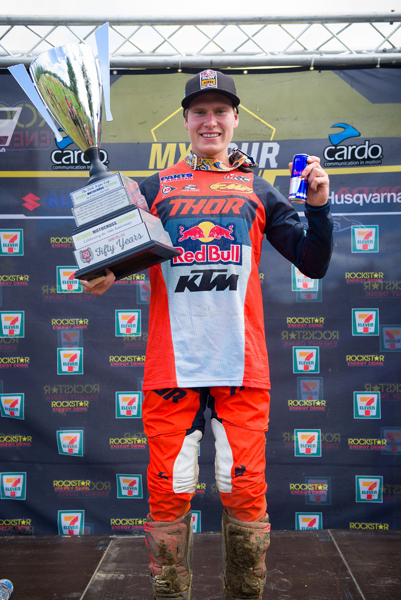 KTM Red Bull THOR Factory Race Team’s Jess Pettis returned to the center of the podium on Sunday with a flawless 1-1-1 performance at Round 4 of the 2020 Triple Crown Series at Sand Del Lee MX.
With rainfall leading into the weekend, the racetrack saw everything from very muddy conditions on Saturday to a much drier track towards the end of the weekend. Pettis showcased his dominance on every front as he led every lap in every type of condition presented. On Saturday, Pettis shot off the line to secure the Moto 1 holeshot aboard his KTM 250 SX-F and he laid down consistent laps from start to finish, securing the win by 35 seconds.
On Sunday, the track conditions began to dry up and Pettis once again took the reins early on with the Moto 2 holeshot, where he led all 14 laps to secure the win by 40 seconds. In the final moto, Pettis nailed the holeshot again and established his dominance early on. With a hard-fought effort by KTM Orange Brigade’s Jacob Piccolo in second, Pettis went on to claim the third victory by a 16-second margin as he enjoyed his third overall-victory in the first four rounds.

Jean-Sebastien Roy, KTM Red Bull Thor Factory Team Manager: “Overall, it was a good weekend for Jess and for the team in general. I’m very proud on how Jess is handling the pressure of this championship and how he handled the racetrack and its changing conditions throughout the weekend. He dominated all three motos and showed great maturity making no mistakes, not riding over his head and avoiding trouble – like a true champion.”
Jess Pettis, KTM Red Bull Thor Factory 250 Rider: “The weekend went really good, I was able to get off to three really good starts and put the hammer down and ride some good consistent laps to sprint away from the field. I’m really happy to go 1-1-1 for first overall and extend the points lead heading into the final round.”
Team rider Cole Thompson was sidelined once again for Round 4 as he continues to battle some health issues. Thompson hopes to return to racing at the next round.
WMX Class – KTM Supported racer, Eve Brodeur, went 1-1-1 in the WMX class to further her perfect season in the 2020 championship, where she now sits 73 points ahead in the standings. She also earned 31st overall in the highly competitive 250 Pro class with solid 35-27-29 finishes on the weekend.
Orange Brigade – KTM Orange Brigade’s Jacob Piccolo had a stand-out performance on Sunday with a pair of second-place finishes in the final two motos. Despite a 16th place finish in Moto 1, Piccolo’s overall score was good enough to earn him a fourth overall in the class.
It was another dominant day for KTM Orange Brigade rider Sebastien Racine, who won two of the three motos in the FXR Pre-Mix class to claim the top position over KTM rider Brandon Gourlay in second.