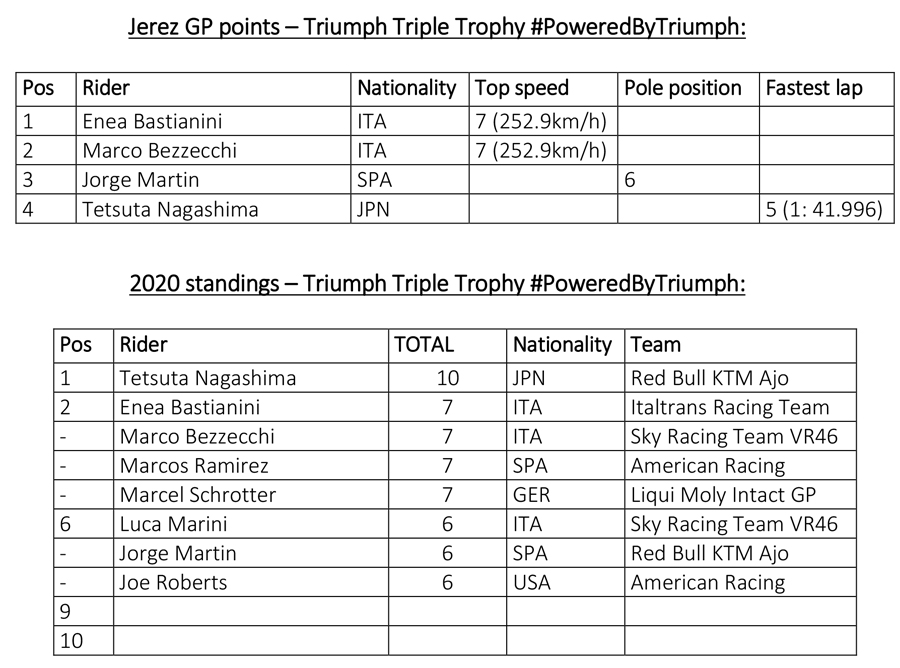 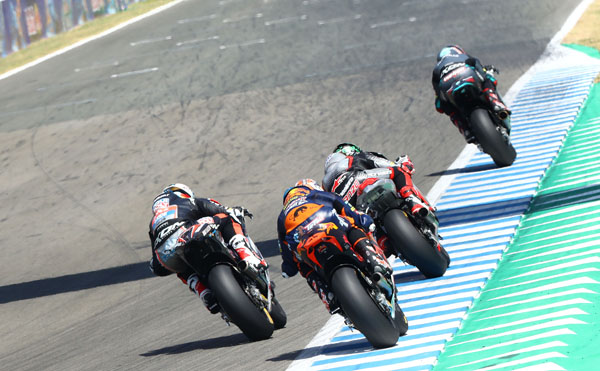 The Moto2™ World Championship made a very welcome return to action this weekend in Spain, after more than a four-month break since the opener in Qatar. Luca Marini rode a dominant and controlled race in Jerez to take his first Moto2™ victory of the season and his third with Triumph power. Starting from the second row of the grid, in fourth position, the Italian Sky Racing Team VR46 rider made steady progress to hit the front on lap four, deposing pole man Jorge Martin, and never looked back.

Working hard in the first half of the race, he opened up a gap of 1.5seconds which he then controlled to the flag, and despite continued pressure in the closing six laps, Qatar GP winner Tetsuta Nagashima couldn’t do anything about Marini’s pace and had to settle for second – a nonetheless impressive performance having started from eighth position. Having done similarly in Qatar, where he rode from 14th to take his first Moto2™ victory with Triumph triple power, the Japanese is surely one to watch.

Polesitter Jorge Martin lost out to both Marini and Nagashima on lap four, but then held onto third position for the remainder of what for him was a fairly lonely race, only coming under pressure from Sam Lowes in the final laps. Ultimately, the Englishman couldn’t catch Martin and came home fourth.

Despite the air temperature being 50 per cent hotter at Jerez than during the 2019 edition of the Grand Prix, owing to being run two months later as a result of the heavily revised calendar, the development work on the Triumph 765cc triple completed during the off-season continued to redefine the Moto2™ category. Marcel Schrotter set a new outright lap record in free practice three on Saturday morning, following the outright record also falling in Qatar.

In the Triumph Triple Trophy #PoweredByTriumph, Nagashima’s fastest lap during Sunday’s race gives him an early lead in the standings, whilst for the second race in a row there were two riders setting the identical fastest top speed, demonstrating just how close the performance of the engines is and how tight the competition is.

Steve Sargent, Triumph’s Chief Product Officer, said: “Luca rode an imperious race in Jerez to take a well-earned victory, particularly after having led for so much of the race in Qatar only for that to end in disappointment. It’s also great to see Tetsuta emerging as such a force this season, as he once again was able to come through the field , demonstrating just how exciting the racing in Moto2 continues to be. I’m pleased too to see another new outright lap record being set, particularly after all our work on the 765cc triple engines over the winter. With almost a full set of new lap records set in our first season in Moto2 last year, we’re now competing against our own existing records, working hard to give the riders more as they also become more familiar with the Triumph engines and the new riding style.”

The Triumph Moto2™ 765cc race engine is a development of the class-leading Street Triple RS 765cc road motorcycle and produces more than 140PS and the same visceral soundtrack. Next on the calendar for Moto2™ is the second in a back-to-back pair of races at Jerez this coming weekend, 26 July. 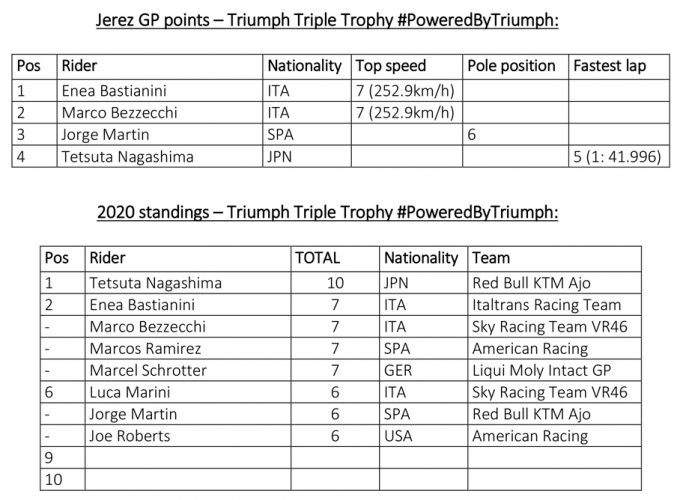