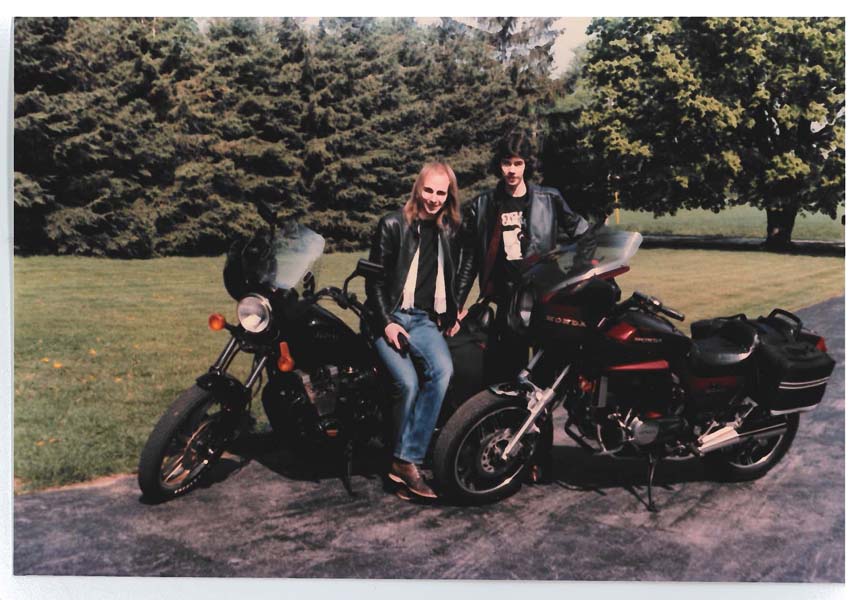 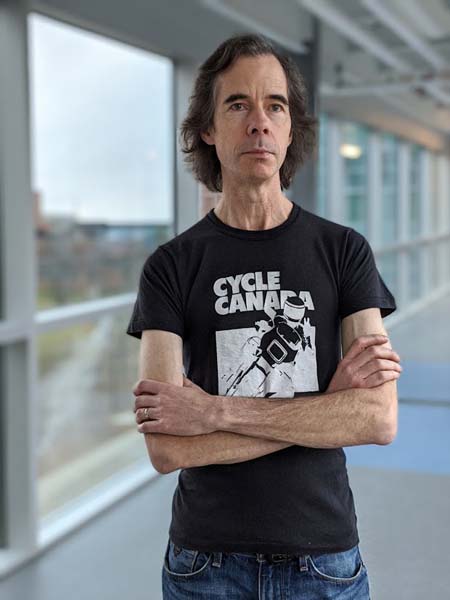 In the spring of 1986 my best friend from university and I completed our undergraduate degrees in math and computer science. Not only was Shawn my motorcycle pal, but we also played in a band together. By a quirk of physiology he bore a striking resemblance to Canuck rock guitar legend Kim Mitchell, and we were both fans of Kim’s former band, Max Webster. Combining our interests, we planned a summer motorcycle tour that we called our Universal Juveniles Big Best Summer of A Million Vacations, drawing from a few Kim/Max song titles.

Neither of us had yet done any significant multi-day motorcycle touring, so a small warm-up tour was warranted. We picked Montreal as our destination for the May long weekend because Shawn had friends there with whom we could stay. We observed that all the cars in their Outremont neighbourhood had badly-scraped right front and left rear bumpers thanks to the daily shift of parallel parking schedules on the narrow streets. We also learned that in the city there was little patience for rule-following out-of-province bikers who waited their turn at four-way stops. Horns blasted us from behind while we yielded to the driver on the right.

Communication in French was my responsibility. Typically I would translate a restaurant menu for Shawn, we would agree on something we both wanted, I would order first in French, and then he would smile at the server and say, “la même chose.” This worked well until he got ambitious in a French-only restaurant and ordered steak tartare for himself, much to the dismay of the server, who frantically scoured the venue for someone who could explain in English what he had asked for. Shredded raw beef wasn’t what he expected, but he gamely stuck with it to save face.

After our successful Quebec experience, we planned our summer trip: two weeks in the Atlantic provinces. Leaving from Waterloo, Ontario, in late June, our first day on the road began with the inevitable slog down the 401 until we diverted to the relaxing Thousand Islands Parkway. We spent the night spooked by moon voices outside the tent at the Ivy Lea campground.

Shawn was the experienced tent camper so those logistics were left to him. His black and gold Yamaha Midnight Maxim 750 cruiser and my candy wineberry red ’83 Honda V45 Sabre were laden with soft luggage and camping gear. Shawn liked to ride in town, looking for people he’d like to know, and he would slow down for curves. I preferred to get out of town in search of good roads, and would speed up for curves. But we generally maintained an agreeable itinerary and pace.

We hit all the popular spots you’d expect down East: Grand Falls N.B.; the world’s longest covered bridge in Hartland; the reversing rapids in Saint John; the tidal bore at Moncton; and Flowerpot Rocks near Hopewell.

Rain did not spare us its malevolence. We shrouded ourselves in rainsuits upon docking in PEI. Shawn adopted his mantra of “follow the blue” (any little hint of clear sky) as we rode inland, red mud splashing the undercarriage while raindrops popcorned on our helmets. We had not booked accommodations in advance, and through town after town we found no open motels or restaurants. One motel sign bore the unwelcoming greeting, “Closed For The Season.” It seems PEI doesn’t open until July 1. Finally we found a spot for the night. For some reason (long-hair dudes in soaking gear, I suppose) we received the deluxe bonus treatment of a $50 damage deposit and a room at the extreme far end, where we parked under an overhang for shelter.

But fortune smiled upon us the next day with paradise skies over Cavendish Beach and the discovery of a bar that was holding an air band competition that night. We had won such a competition at university, performing to Max Webster’s “The Party,” so we were determined to enter this one too. We struck up a conversation with some young toughs hanging around the place, and one took us to his car where we rummaged through his collection of cassettes looking for something we could use. Passing on his extensive Ramones collection, we found a Prism tape and chose “Spaceship Superstar” as our vehicle to success. Ensconced in our motel room, we laughed ourselves silly as we mimed wheedly-wheedly guitar solos. We did not win the competition but we did receive acclaim as a couple of good-sport tourists.

After some sight-seeing in Charlottetown we realized we were in danger of missing the ferry, but 45 minutes at a desperate 130 km/h got us there with minutes to spare. Onward to Cape Breton, where we enjoyed the fabulous Alexander Graham Bell museum in Baddeck before chasing the grail of the Cabot Trail. The weather was glorious, with the famed scenery competing for our attention as much as the serpentine road. Conferring after completing our first lap, we split up to pursue our respective inclinations. Shawn heeded sun voices calling him to the beach at Black Brook Cove while I rode back and forth over the Smoky Mountain section that you see in all the photographs, the Sabre’s electrically smooth V4 spinning sublimely at 8,000 rpm in middle gears. Truly days to remember.

The return leg of our journey took us to more of the must-see highlights including the Halifax citadel and Peggy’s Cove. Shawn posed for a picture peering over the Maxim’s odometer that had just turned 10,000 kilometres, while in my stunt photo I stood beneath the Lunenburg town sign while holding a packet of Anacin tablets (remember that TV commercial?).

Our route home took us through Vermont and New York State, destinations that would become favourites of mine in subsequent years. Those Anacin tablets ended up being quite useful: my butt was burning sore thanks to the sparse padding in the Sabre’s stock seat (and my own). I should have ordered that Corbin sooner. The Sabre spent the last few hundred kilometres on the 401 gently swaying as it pivoted from edge to edge on a badly squared-off rear tire. A Works Performance shock was another future upgrade that tremendously improved the bike’s handling. Really wish I had done that much sooner too.

We returned home still the best of friends after a splendid trip. Shawn later sold his Midnight Maxim and moved to Vancouver, and hasn’t returned to motorcycling. I remained faithful to the Honda V4, acquiring a ’93 VFR750F (“Snow White”) in 1995 that I’ve had ever since, and administering the Ontario VFR Club. I’ve had many enjoyable riding seasons over the last 30-odd years, but that first tour in 1986 surely made it the big best summer.

First Person is dedicated to readers of Cycle Canada.Tell us about a motorcycle trip, tale, or experience that you won’t soon forget. Contributors will be granted a free 3-year subscription to the magazine. Send 500 words and a photograph to jpare@editionsjeanrobert.com.