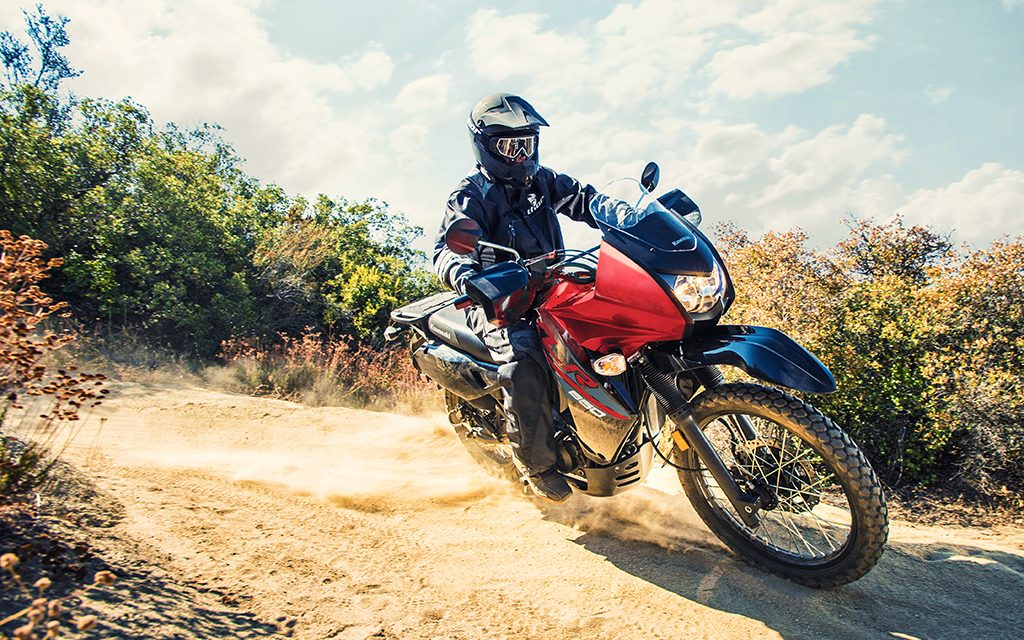 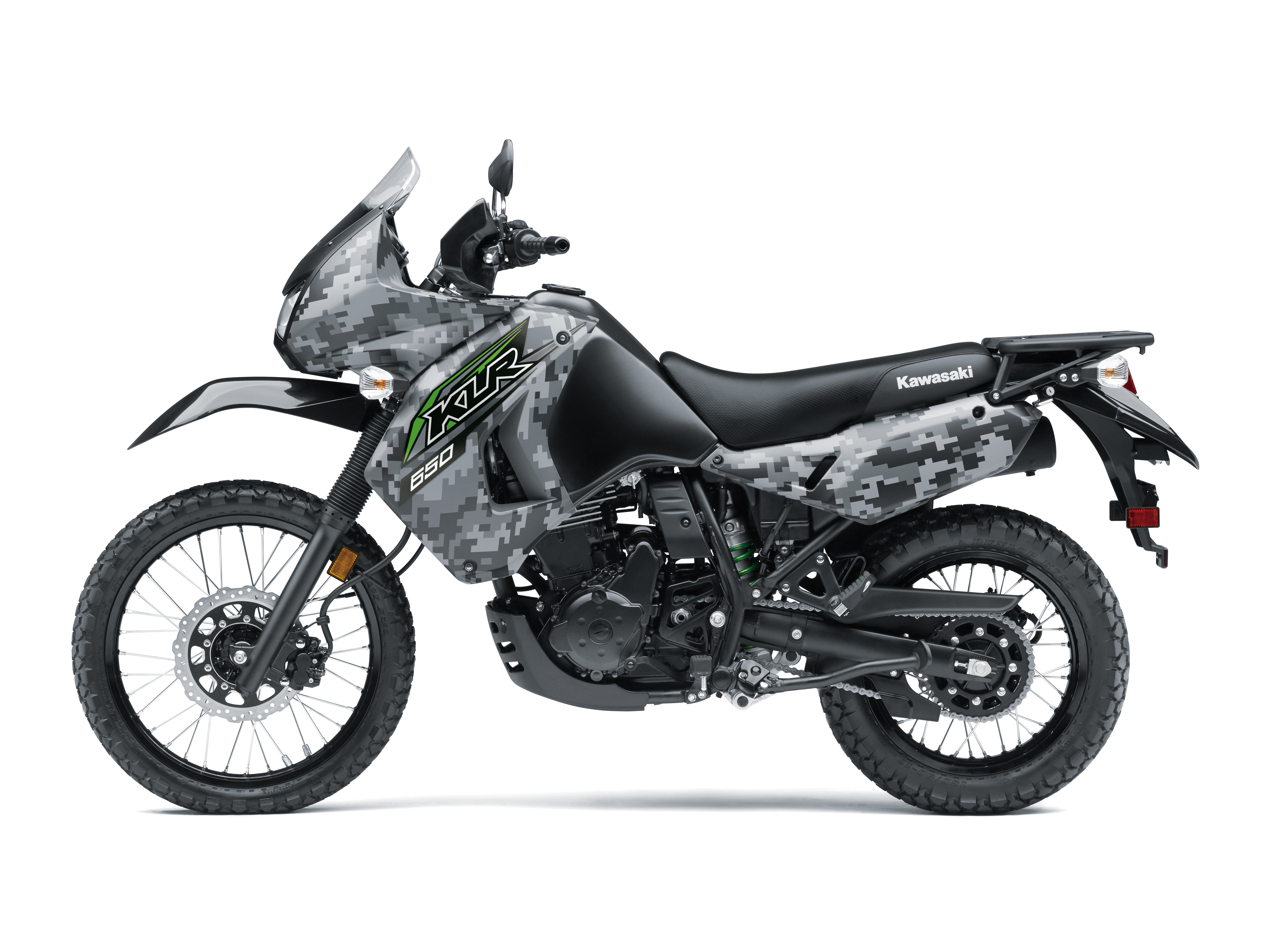 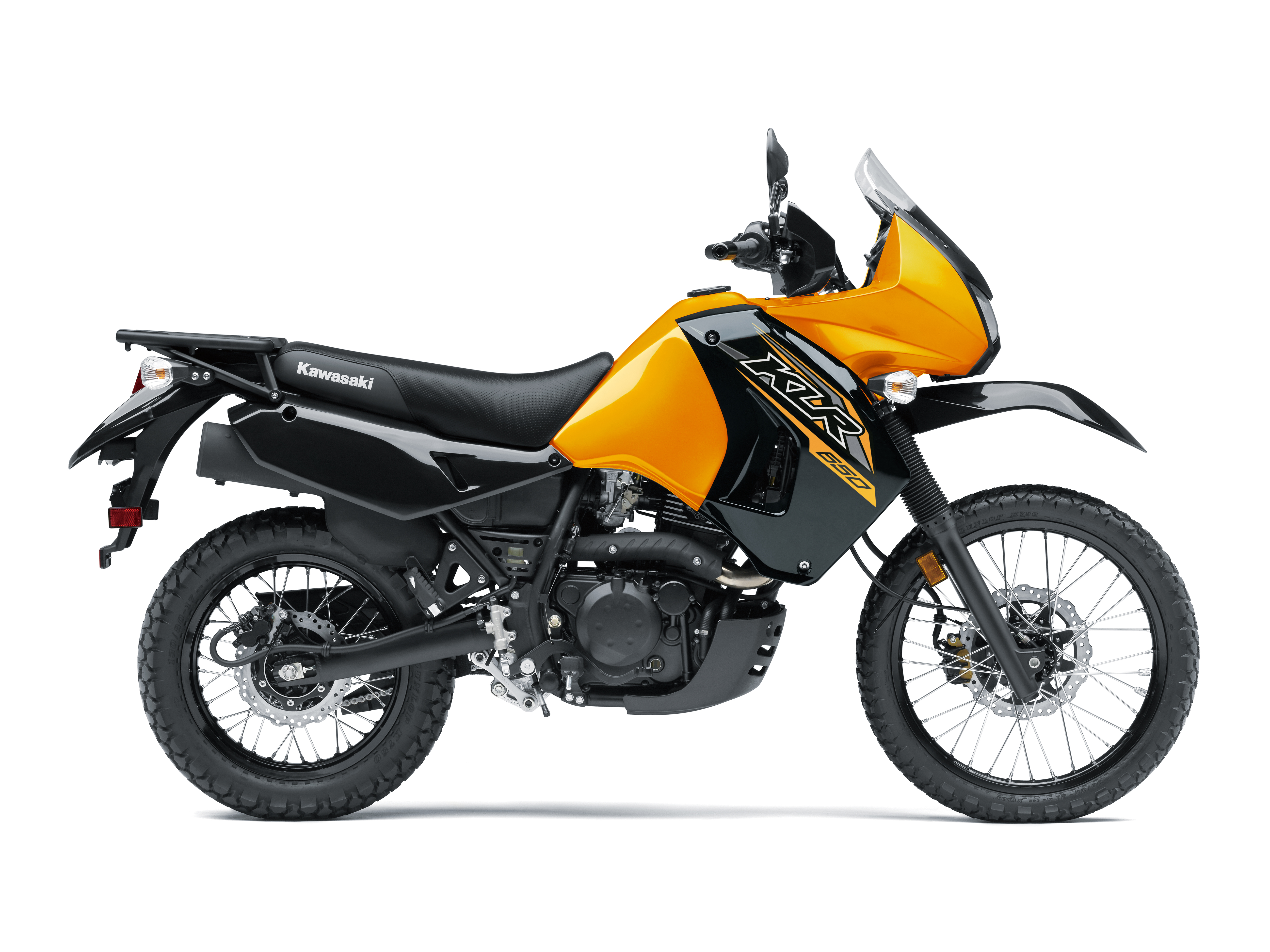 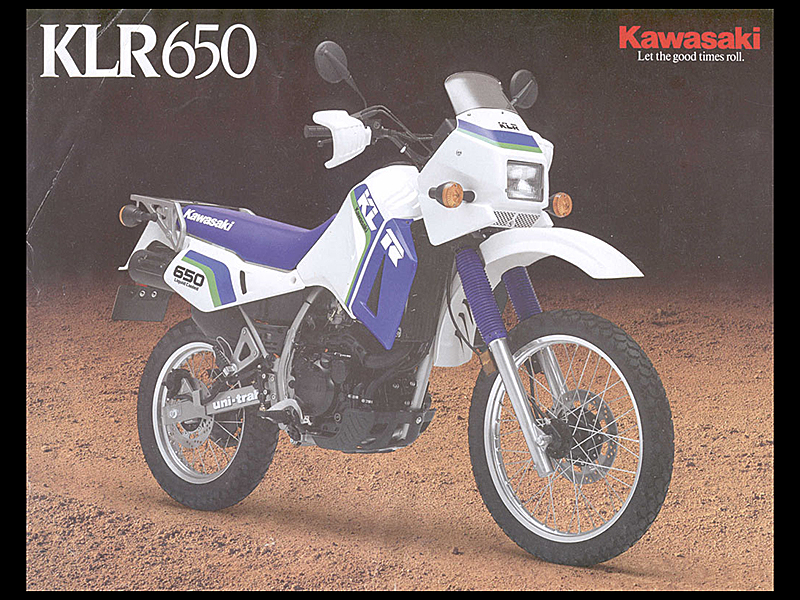 Kawasaki KLR : From mythical to legendary

After succeeding the KLR600, Kawasaki’s KLR650 has been redesigned only once in its 31-year lifetime, in 2008. In the course of its long career, much has been written, a lot of gas has been burned, and many motorcyclists have become world travellers aboard the indomitable KLR. Despite its huge success and the fact that many connoisseurs do not hesitate to call it indestructible, Kawasaki decided to stop the production of the KLR. Here is a post-mortem analysis of the news that came as a surprise to nearly everyone.

The year was probably 2010. I had just obtained my motorcycle learner’s licence, but I had no motorcycle and no friends around to guide me into making a wise choice for a first bike. There was not much to be found on Facebook at that time, and the most reliable sources were a few websites, mostly in English. I don’t remember how or why, but for some reason I set my mind on the Kawasaki KLR650. But because of different factors that would take too long to explain here, I did not buy a KLR and I ended up with a different machine, from another manufacturer. Still, through all that time, my fascination for this unsophisticated Japanese model never vanished. So when I learned that Kawasaki would stop making the KLR650, I immediately felt I had missed out on something. 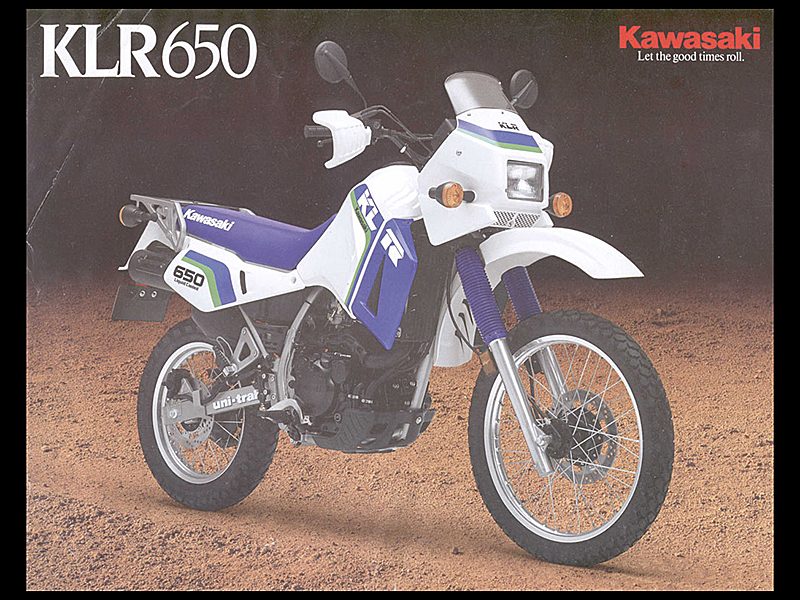 Let’s go back in time and have a look at what was happening in 1987. Matt Groening was presenting the first Simpsons episodes in The Tracey Ullman Show. People were lining up to see Lethal Weapon and Beverly Hills Cop 2 in cinemas. Michael Jackson was signing Bad and U2 marked a generation with The Joshua Tree. And something big came to America from the Land of the Rising Sun: the Kawasaki KLR650. When it arrived at Canadian dealerships, in 1987, the KLR650 appeared as a technologically advanced machine that would somehow redefine the affordable, simple and reliable Adventure motorcycle segment. In the following years, it has been at the heart of many stories of great trips around the world, U.S. soldiers found it perfect for their missions (though it had to be converted to diesel fuel) and it was even seen on the starting line of the grueling Paris-Dakar race in a version called Tengai (“where the sky ends” in Japanese).

Marc Chartrand has been riding since he was 15. That adds up to more than 40 years of motorcycling experience, and through that period, he has owned six KLRs. “No matter what other bike I had, I’d always come back to the KLR,” he explains. “It’s a blue-chip, it is not very powerful, but when you know how to pilot it, you can follow anyone.” Amongst his numerous trips on a KLR, he remembers one in northern Québec. With five other motorcyclists, he went along the railroad tracks to reach the village of Sherfferville. They covered 70 kilometres with no road to go from Esker to Sherfferville for a visit to the opencast mines. Out of six motorcycles, four were KLRs. “I am certainly fond of that model even if it uses old technology,” he adds. “I’ve had six so far and I would not hesitate to have a seventh one.”

It may seem too strong a word, but it’s not. The KLR is in that category of motorcycles that can survive practically anything. To prove it, the Fortnine website posted a 16-minute video that became viral where they tested the legendary sturdiness of the KLR. In fact, they tortured it: they drowned it in a lake, they forced it to fly, they dropped it intentionally, they had it pull heavy objects, they threw it into collisions, they rode it in the cold. Nothing short of an explosion (untried) seemed likely to stop it.

Jean-Philippe Imbeault, sales director at Nadon Sport in Saint-Eustache, Québec, covered more than 50,000 kilometres on his KLR. He rode to Mexico and to the western and northern parts of the country many times. “It is a very versatile and agile motorcycle, with a hard-to-beat quality-price ratio,” he says. “It has a good fuel range, and the suspension travel is impressive for a motorcycle in that price category. It won’t be produced anymore and that makes us sad. It was indeed an indestructible model.” 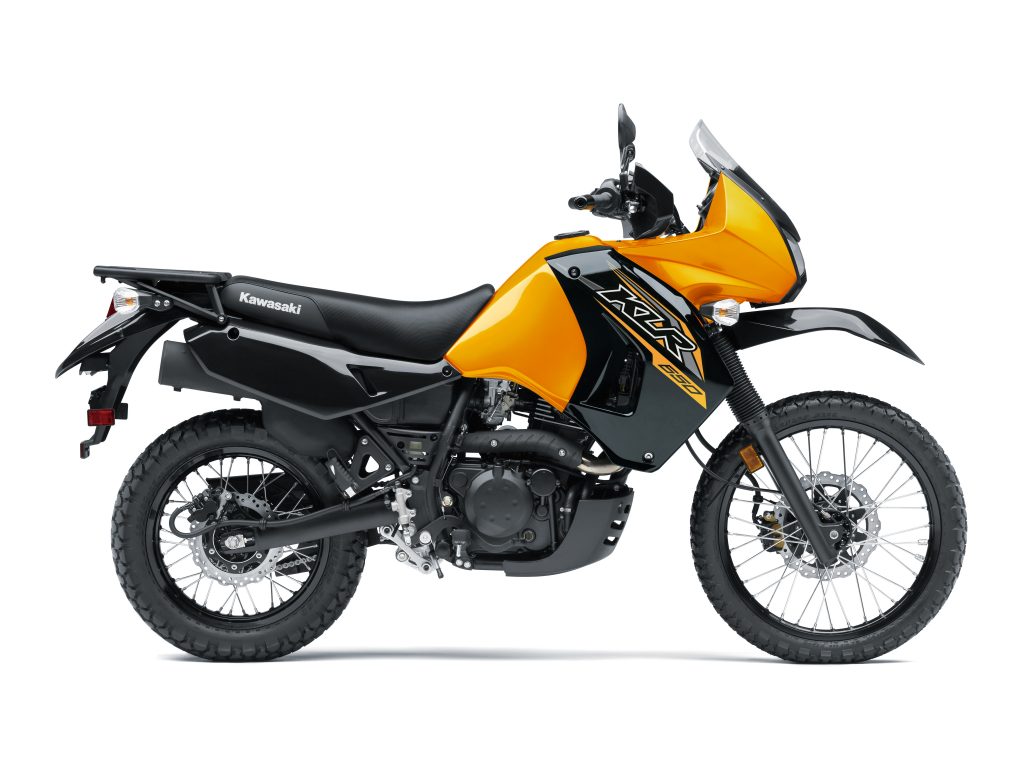 The KLR650 has been manufactured for more 30 years, but it did not evolve much technologically during those years. Nowadays, manufacturers are proud to offer traction control, different riding modes, heated grips and various other goodies. With its basic approach, the KLR clashed, and the gap gradually widened between it and other models in the same category. People had hopes that Kawasaki would replace the carburetor with an injection system, and maybe add antilock brakes. They were not asking for much, but that did not happen. And finally, the KLR disappeared the same way it was launched: in a simple no-frills manner. This machine had an engine, two wheels, and a lot of guts.

With no more KLR650 in Kawasaki’s product list, does that mean that the manufacturer is leaving the segment of Adventure motorcycles, those bikes that are comfortable on the pavement as well as on dirt roads? Not necessarily. With a few modifications, the Versys could perhaps pick up the torch. But even if that one gets replaced some day, many motorcyclists will consider that the KLR deserves to enter the ranks of legends, a legend that they have seen rise and fall.

Even as the KLR went around the world thousands of times, it always kept its wheels firmly planted in the ’80s, for better or for worse. And that is probably why, suddenly, people are all after the older models. Who wouldn’t like to have a piece of history in his garage?

American adventurer and author Gregory W. Frazier is the first motorcyclist who went around the world four times. In a little over four decades, he is said to have ridden more than 1.6 million kilometres on a motorcycle. He wrote 15 books about his adventures and he appeared in various movies and documentary series on motorcycles. For his last trip around the globe, in 2000, he chose a Kawasaki KLR650. Ten years ago or so, he gave this bike to the National Motorcycle Museum in Iowa. 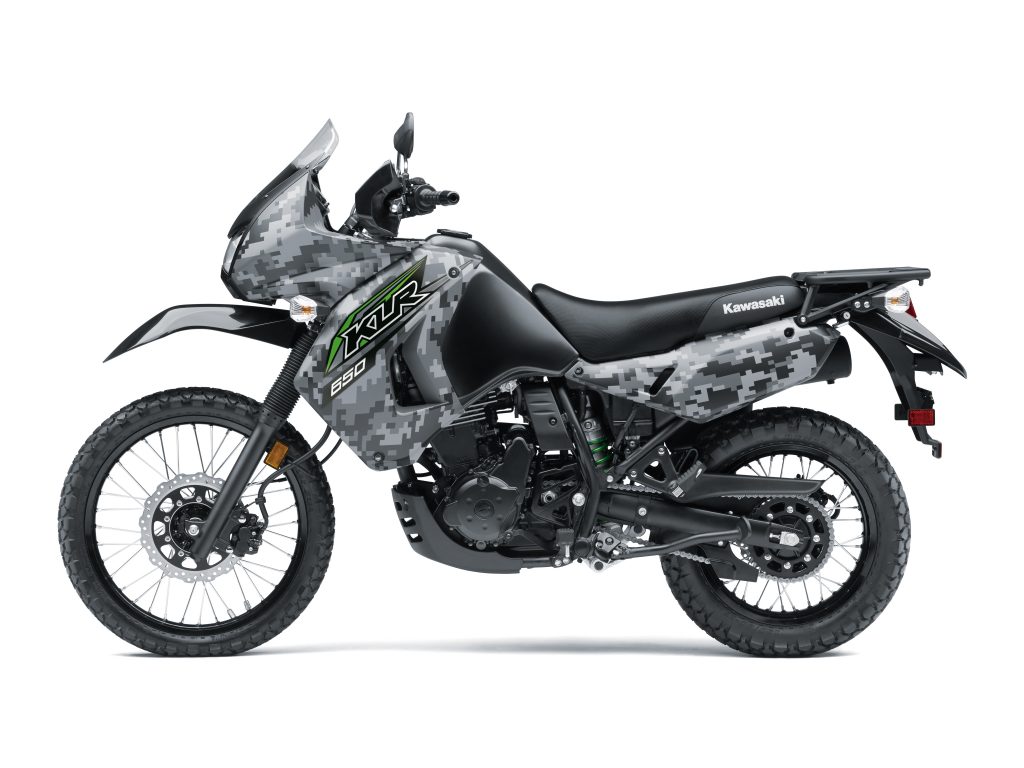 2 thoughts on “Kawasaki KLR : From mythical to legendary”