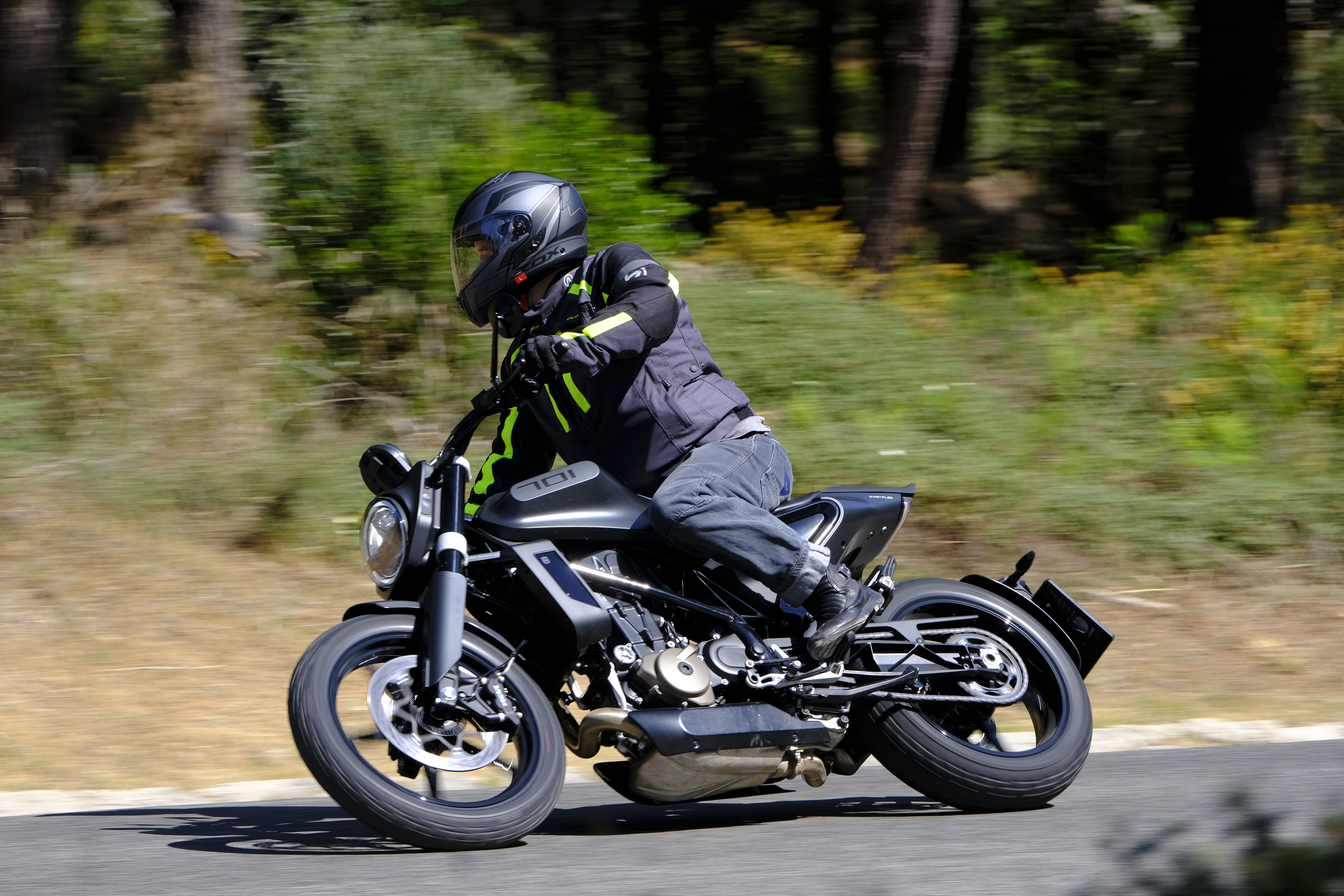 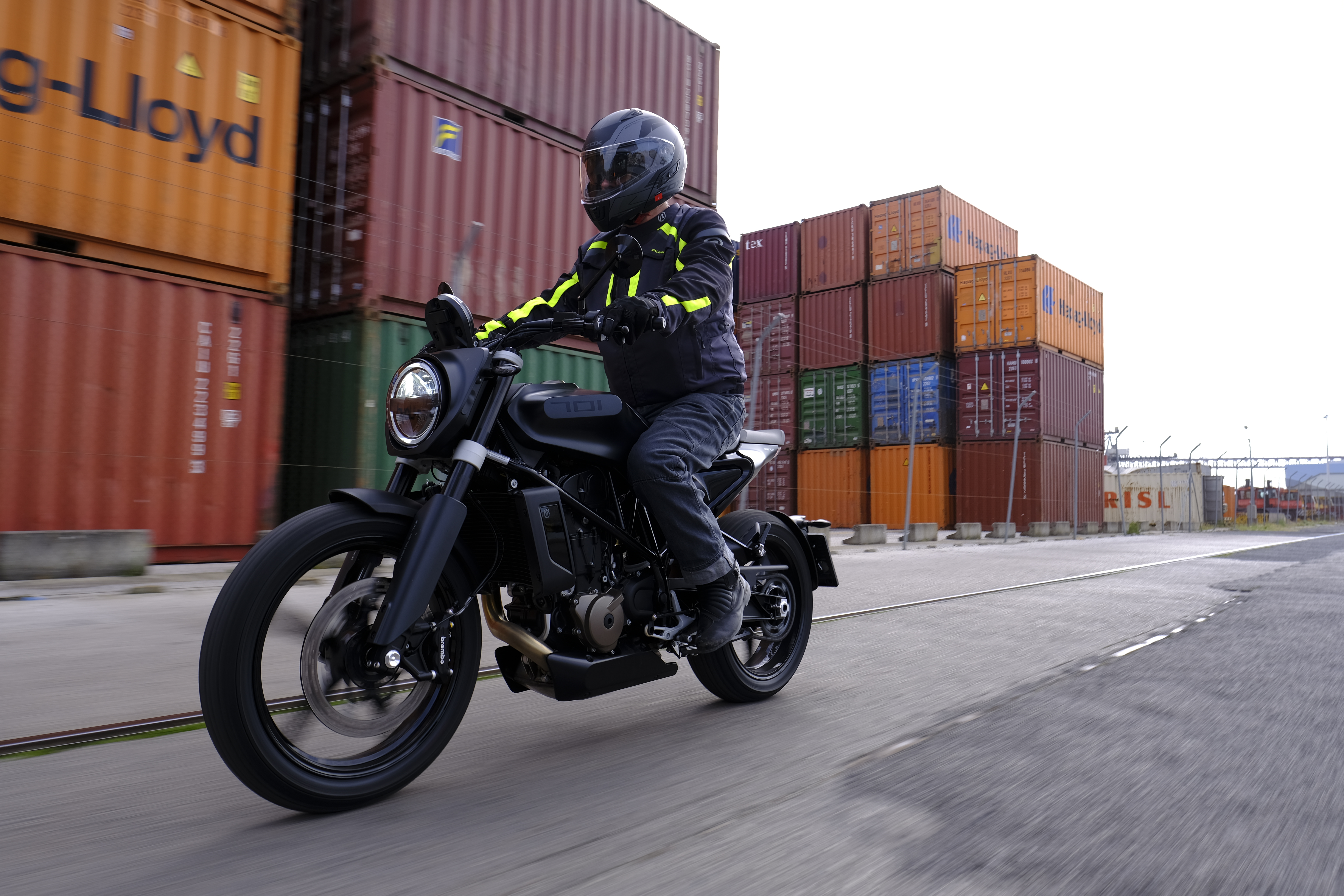 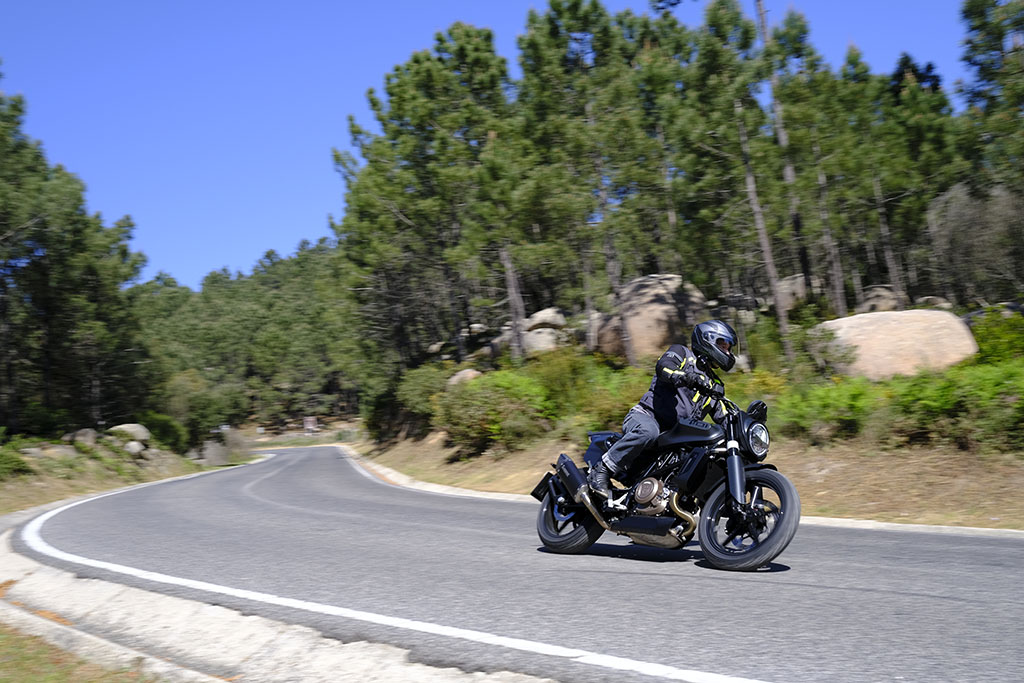 SWEDISH HOTTIE IS BUILT FOR THE ROAD

For journalists at the Lisbon, Portugal, launch of Husqvarna’s sensational new Svartpilen 701, first sight of the bike came after a stroll through a downtown hotel to the back courtyard, where under the sky, a Husqvarna Motorcycles banner, and the second storey windows of adjoining buildings, a black motorcycle stood alone upon a white rectangular mounting plate. If they had not seen pictures of the nearly unpronounceable model—or even if they had—they might have been astonished.

Svartpilen is Swedish, apparently, for “Black Arrow,” and the bike’s basic-black and arrow-sharp status is clear. But its purpose? That might be a bit muddled. In his 1982 novel Space, the late American author James Michener talked about the space program’s Lunar Lander, which exactly 50 years ago, as this is being written, sat on the moon, a bedroom and office for two U.S. astronauts. The lander, said Michener, was an example of the beauty in a form-following-function aesthetic. Everything about that vessel, which was essentially a pile of boxes on four jointed legs, was designed on paper (probably actually on paper, given the year) to work, and work without flaw or failure. In that functionality lay its beauty, said Michener.

Husqvarna’s Svartpilen 701 doesn’t exactly agree with a form-following-function rule, but the point is that it looks like it does. It’s got the form, if not the function. James Michener said that if you don’t understand the beauty of that kind of design, you might think the Lunar Lander was ugly. But if you do get it, the Eagle was a thing of beauty.

It wouldn’t have taken much for those journalists on that warm evening in Portugal to understand what the American author said. The Svartpilen looks like it was assembled by a logger with a double-bladed axe. “Olof, cut here, and then there, with your big Swedish axe.” But, in all its hacked-off and hammered together artistic purposefulness, the Svartpilen is one hell of a good-looking motorcycle. It looks muscular, defined, determined, and wicked. Like something you might ride if you were gonna rob a liquor store, then wait for the cops to respond so you could outrun them. That’s not recommended, by the way.

Officially, the Svartpilen is a street bike with the cut-off look of a flat track competition model. The headlight wears a horizontal protector mask and an encircling LED daytime running light. The 43 mm WP fork legs have plastic protectors, and there’s a moulded plastic number plate on the right side of the bike. Behind the rider’s ass is a small passenger seat, and behind that is the rear tire, and then a hanging fender with taillight and plate holder—it’s all very abbreviated. 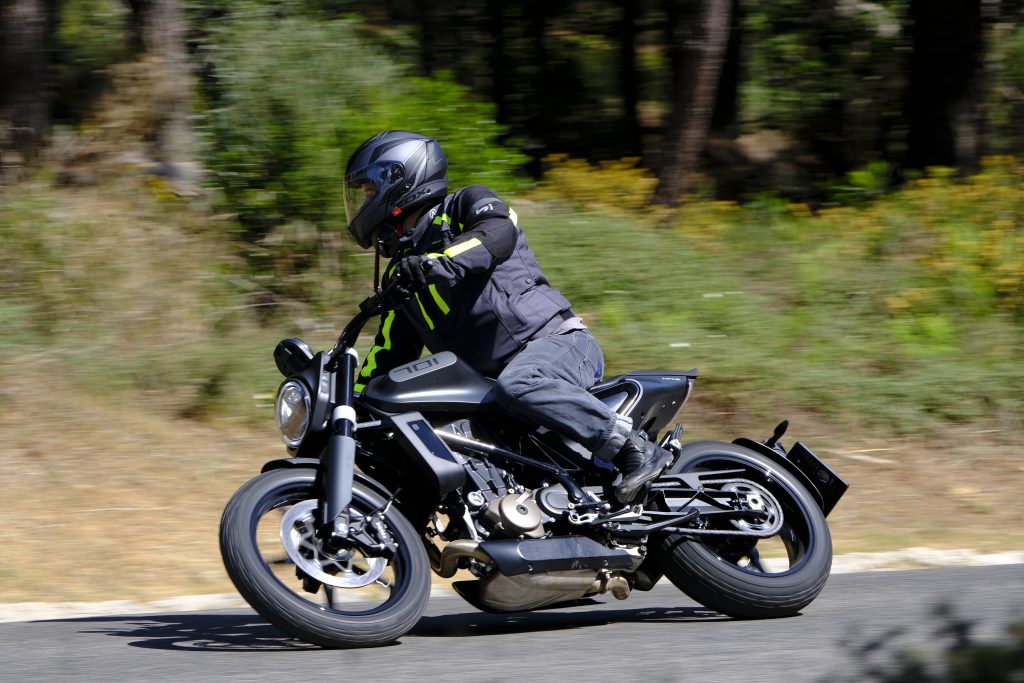 The frame is steel in a trellis design that adds to the purposeful look, and the front wheel is an 18-incher, supplied with a Pirelli MT60 semi-offroad tire (the rear is a more common 17 inches in diameter). The slightly blocky tire treads do look cool, and the tires stick nicely to asphalt when leaned over and accelerating.

Everything about the Svartpilen is made to look purposeful, but of course that purpose is to attract street riders and their money. The Svartpilen 701 retails in Canada for $13,399, which is a lot for a 700 cc motorcycle, but what will sell the bike here is not its price or its performance (more on that in a bit) but its appearance. It would not be easy to sit on a Svartpilen 701 and look like you don’t know what you’re doing. It’s got authenticity written all over it.

But is it authentic?

If by that do we mean can it be raced in flat track? Well, maybe, but it’s not advisable. It wasn’t made for racing, though, it was made for the street, and flat tracker appearance or not, the Svartpilen is a street bike with cred.

Under the sculpted 12-litre fuel tank sits a single cylinder four-stroke engine capable of pumping out a claimed 75 horsepower and 72 Newton-metres (53 ft-lb) of torque, which, given the unfueled weight of 155.5 kg (350 lb) results in plenty of shove available at the right hand, in any gear. It’s equipped with two counterbalance shafts, one in the head and one in the crankcase, and the character of this big single is smooth—you can feel a tingle of vibration at some rpm levels but it’s never bothersome, and overall, you would not know from vibration or horsepower characteristics that you’re riding a bike with only one piston. 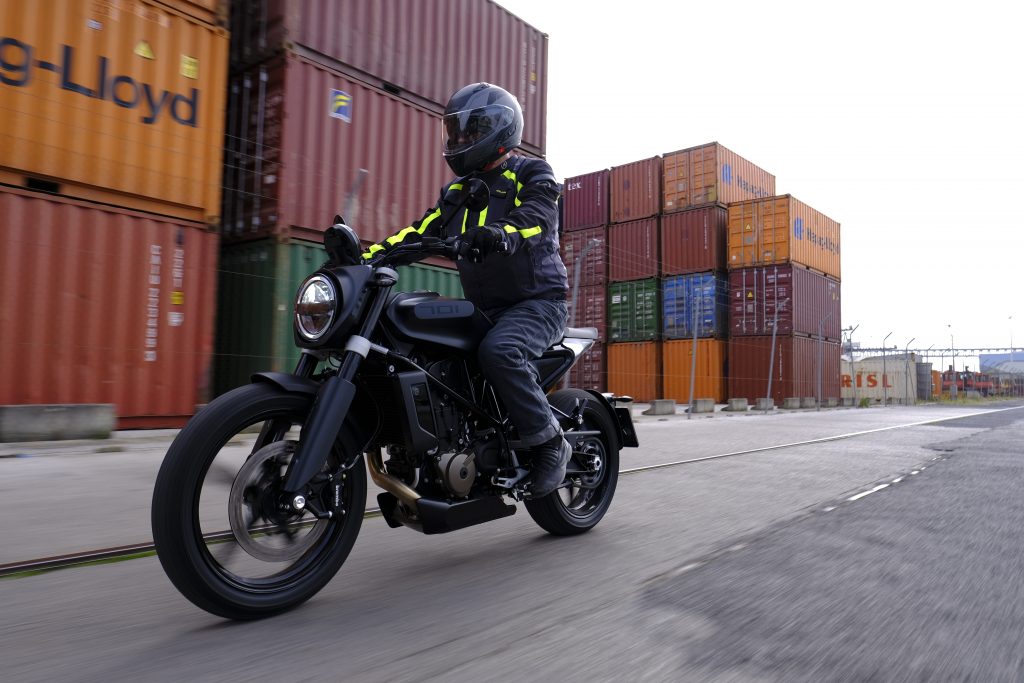 It’s also nimble, as you’d expect given the absence of weight, and while the 18-inch front wheel has to slow down the steering a bit, the rake angle is only 25 degrees, and the steering is light and quick, without being unstable. In a corner, it tracks well, and braking didn’t upset it when leaned over.

The Svartpilen 701 comes with a quick-shifter for changing gears, in either direction, without use of the clutch lever. It works smoothly, especially if the engine is on the throttle, but I ran into a false neutral between 5th and 6th gears, twice, and two other journalists told me it happened to them, too. Not often enough to make me think it’s a problem, but it did happen.

Clutch engagement, when I did use the lever, was nicely progressive, making it easy to get going from a stop, and the clutch lever pull is light, though in stop-and-go traffic my left hand became a little sore after a lot of clutching.

The Svartpilen 701 is fun to ride, can be ridden fast on a sporting road, and can even be thrilling, as long as you remember that you’re not riding a 150-horsepower sportbike. But that sounds like faint praise and I don’t mean it to be that way. I liked it a lot, and if I were in the market for a motorcycle purchase, I might even buy one; the Svartpilen 701 is light, nimble, comfy, powerful, smooth, and good-looking. You could live with one in your garage, and under your butt, for a long time and be happy about your purchasing decision. That $13,399 sticker price is a bit much, especially given the price of similar sized models from KTM and other manufacturers, but it felt to me like a case of getting what you paid for.

Part of the reason for that is comfort. The thin, flat seat is not designed to look couchy, but doesn’t start to hurt the ass cheeks until long after other motorcycle seats would have been torn off and thrown to the side of the road. The dinner-table sit-up rider position is very nearly as comfortable as an adventure bike’s. And the torque and horsepower of that big single is impressive. 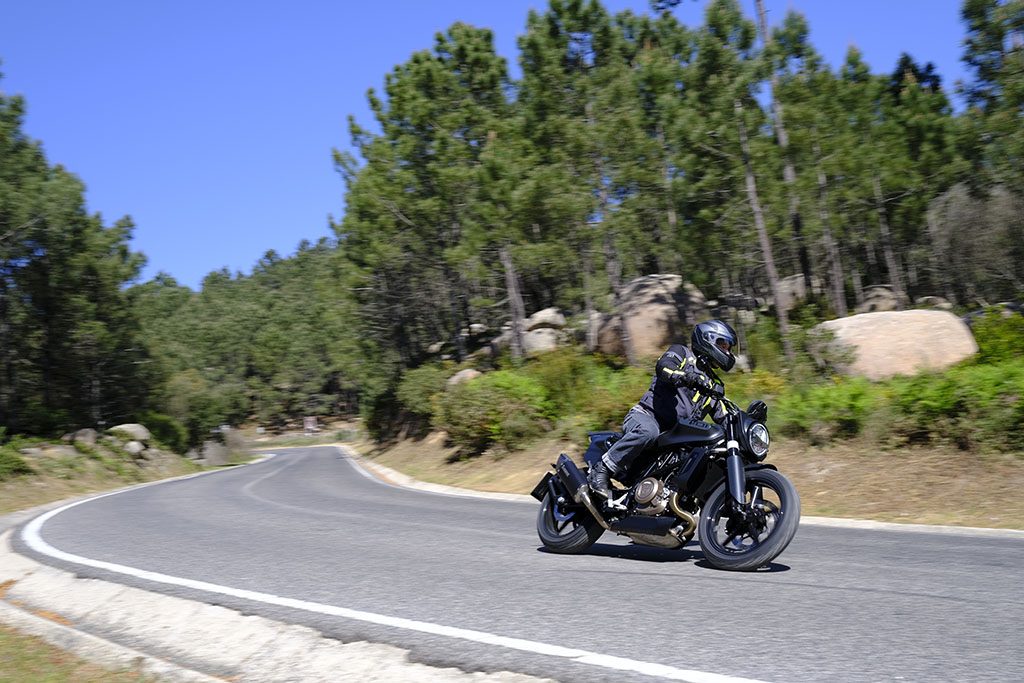 Our test ride lasted for most of a day, and took us out of Lisbon to the west coast—the most westerly part of Europe, actually—and then onto twisty mountain roads before heading back to Lisbon on freeways. The Svartpilen managed itself quite well in all those environments, from city traffic to twisties and uneven pavement and even to rapid freeway riding, it never felt overwhelmed over under-powered, and stayed comfortable all day long. And when it was necessary to push it around on pavement for the photographers, that light weight was a bonus. One rider even got his bike onto the beach for an iPhone shot at a rest stop, and while he needed a little help getting it backed up in loose sand, it wasn’t a difficult move.

The seat height, at 835 mm, should work for most riders; I found that I could reach the ground confidently, though I could not flatfoot it on both sides at the same time (I’m about five-nine, in boots). A wide handlebar kept manoeuvring easy on the arms, though it’s unfaired and you do get a blast of wind at speed, requiring a bit of a tuck, but the triangle of seat to hands to feet is just right for either sitting up nearly straight or crouching a bit into the wind—it works.

There were a couple of female testers in our group, and those that I spoke with raved about the Svartpilen; if you’re female and thinking of buying a motorcycle, this one might be a good choice. Tall male riders also, however, seemed to love the bike. I did not hear any complaints about it, other than to note that shift into a false neutral a couple of times, by a couple of journos.

In fact, from what I could make out among that group of yahoos, the Svartpilen 701 is a winner: the press loves it, and I can vouch for their praise. The Svartpilen 701 moves Husqvarna further and more confidently into the street-motorcycle segment, and riders everywhere should be happy about that.