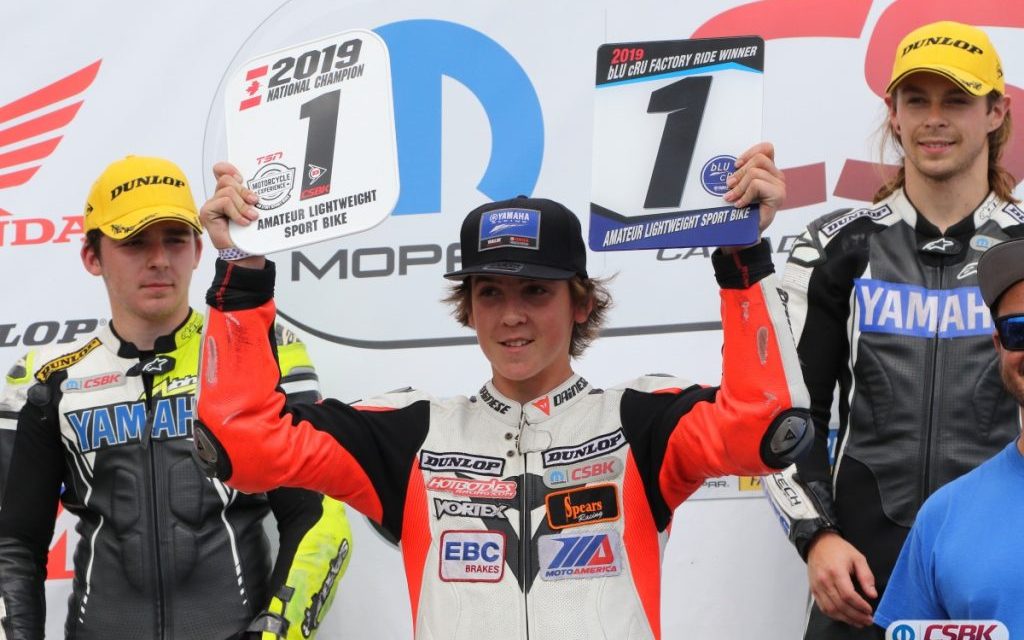 Yamaha Motor Canada is pleased to announce the winners of its 2019 bLU cRU Factory Ride Award program in the disciplines of motocross, road racing and flat track.

Created as a means of supporting and encouraging young racers and their families, the bLU cRU Factory Ride Award gives amateur racers something to work toward against similarly ambitious young Yamaha competitors. Each of the 2019 winners below will receive complimentary use of a Yamaha motorcycle for the 2020 race season, a $2,500 credit toward genuine Yamaha parts and accessories, and a custom graphics kit.

Three awards were offered in MX, presented to the Yamaha rider with the most cumulative points at each of the three amateur national championships held across Canada in 2019. The first person to stake his claim was 15-year-old Julian Benek (Mission, BC), who claimed the award at the Western Canadian Amateur National (WCAN) on his YZ250F with the overall win in the Schooboy class and a second in both 250 Intermediate and Open Intermediate. 17-year-old Jamie Powell (Carleton Place, ON) won at the Eastern Canadian Amateur National (ECAN) after a pair of overall wins in Intermediate MX2 and MX3. Lastly, 16-year-old Jeremy McKie (Beloeil, QC) won the award for a second consecutive year at the Walton Canadian Amateur Grand National Championship (TransCan) thanks to a sweep of the 450 Intermediate class and a third overall in Open Intermediate.

The bLU cRU Factory Ride Award in road racing was presented to the top-finishing Yamaha racer in the Canadian Superbike Championship (CSBK) Amateur Lightweight Sport Bike division. 17-year-old Ben LeClair (Blackstock, ON) rode his R3 to the class championship; his brother Jake, who will step up to the Pro Sport Bike class in 2020, won the first Factory Ride Award given in the discipline of road racing in 2018.

These teenagers put forward their best efforts throughout the racing season to earn a coveted spot in the bLU cRU and add their names to the elite list of Yamaha Factory Ride Award recipients. Yamaha Motor Canada would like to congratulate each of these young riders and their families for their much-deserved awards.