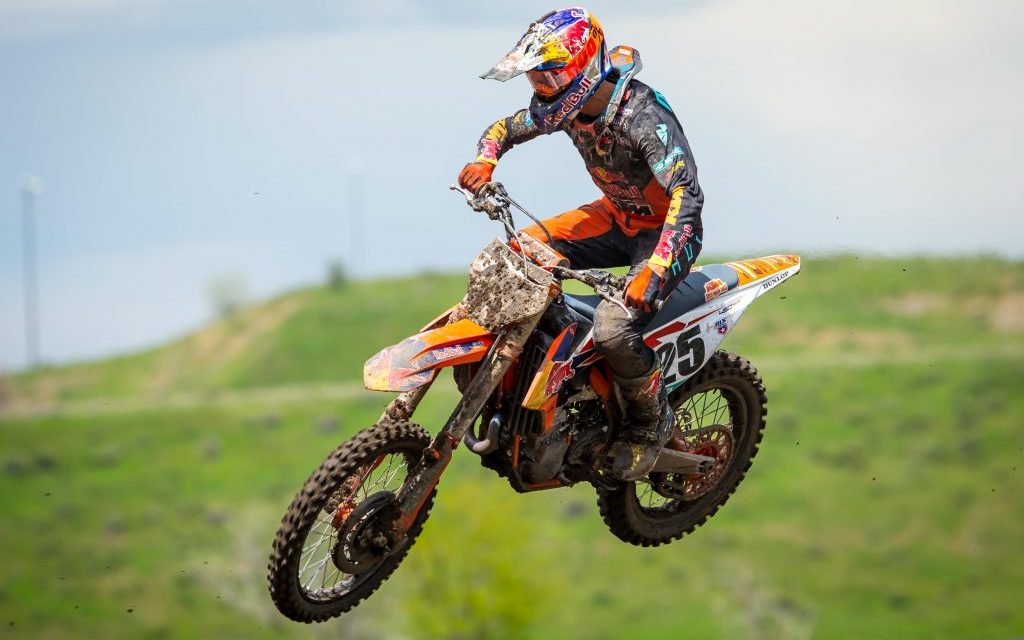 Musquin rallies back for fifth overall at Thunder Valley National

The Red Bull KTM Factory Racing Team showed speed and promise at Round 3 of the 2019 AMA Pro Motocross Championship as Marvin Musquin and Cooper Webb split third-place moto finishes to claim fifth and sixth places, respectively, on Saturday at the Thunder Valley National in Lakewood, Colorado.

Thunder Valley Motocross Park’s mile-high altitude always presents riders with yet another challenge but this year’s unpredictable and extreme weather conditions added an additional element to Saturday’s racing. While the day started off with sunny skies, rain began pouring down just before the start of 450MX Moto 1, presenting much different track conditions than the riders were originally prepared for.

Musquin, the fifth-place qualifier, got a good jump off the start in Moto 1 as he powered his KTM 450 SX-F FACTORY EDITION through the first turn around the top-five. Unfortunately, Musquin got pinched off in the second turn and another rider took out his front end causing him to go down. He re-mounted and rounded the opening lap in 27th. From there, Musquin put on an incredible charge to ultimately bring himself up to an eighth-place finish. In Moto 2, he got off to a top-five start and he immediately jumped into the podium battle by lap two. Bouncing around the third-place spot, Musquin eventually established himself in the podium hunt as he held off a hard-charging group behind to ultimately claim third in the race.

Musquin: “It was a rough start of the day for the motos and I gave my best to come back to eighth in the first moto. Those guys out front were fast, so to catch more than that, it was difficult. I put myself in a better position to fight for the podium and the win in the second moto. Something clicked a little bit and then my riding was better – I had better lines and better flow. We improved the bike a little bit for the second moto and that was the positive.”

After a rough go in qualifying, Webb bounced back to put himself into a favorable third-place start position in Moto 1. He battled up front for the duration of the race, ultimately securing third. In Moto 2, Webb powered his KTM 450 SX-F FACTORY EDITION into the holeshot as he led the opening lap. He got passed on lap two and he continued to battle for a top position through the first five laps. Webb encountered a few setbacks, including a crash and stalling the bike, but he continued to fight through the adversity to ultimately finish eighth in the moto and sixth overall for the day.

Webb: “It was a tough day in Colorado. I struggled a little bit in practice so it was nice to get on the podium in Moto 1. In Moto 2, I made a bike change that wasn’t good at all and I really struggled. It was a tough day but we have two weeks now to try to get better and start the east coast nationals off on a better note.”