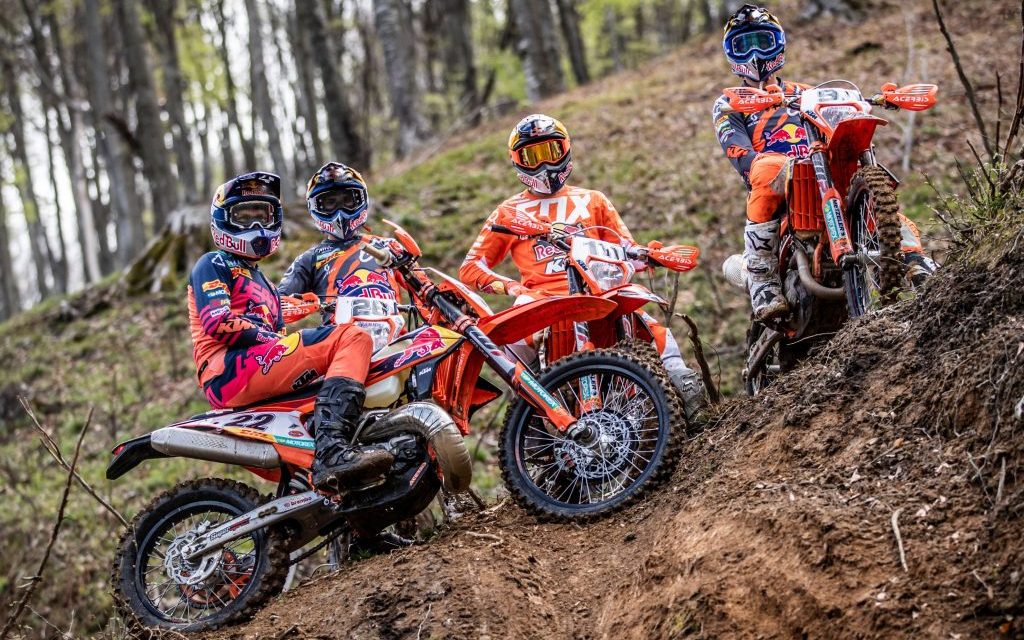 Now in its second year, WESS once again aims to test all competitors’ skill, speed and endurance to the maximum. Comprising a mixture of extreme enduro, classic enduro and cross-country races, the championship will put riders through their paces in seven different countries in the search for this year’s Ultimate Enduro Champion. With each of the Red Bull KTM team possessing their own unique mix of skills, consistency throughout the championship will be key to claiming a strong final result.

The season opens with the Toyota Porto Extreme XL Lagares extreme enduro held in the picturesque Penafiel region of Portugal. Riders will first face an action-packed endurocross-style race on Friday evening, followed on Saturday by the iconic prologue held on the tight, twisting cobbled streets of world heritage city Porto. The results from these first two races decide the start order for the final day. Sunday’s main event pits the riders against a variety of terrain including steep hill climbs, rocky riverbeds and tight forest tracks. The pro class complete two laps of the gruelling track, riding for an estimated four hours.

Third overall at the end of the 2018 WESS, Nathan Watson embraced a steep learning curve during the course of the year. The classic enduro and beach race expert experienced his first extreme enduro events last year, but always put his best foot forward. In the events that fell into his comfort zone – namely the Hawkstone Park Cross-Country and Red Bull Knock Out beach race, the young Brit excelled claiming the runner-up result at Hawkstone and going one better at Knock Out. Better prepared for the 2019 series, Watson wants to win.

Nathan Watson: “WESS was a completely new experience for me, I didn’t quite know what I was in for until I raced those hard enduros. It was physically and mentally tough, but I am proud to say I never gave up. Staying focused throughout the series was challenging but it paid off with good results toward the end of the championship. For 2019, I know what to expect and I am definitely better prepared, especially for the extreme events. I’ll try to enjoy every race, but I’m definitely looking forward to Hawkstone Park the most – it’s my home round and I want to stand on top of the podium in front of the local fans.”

Always a rider happy to take on new challenges, Josep Garcia came into WESS last year as a world champion. With his rigorous training regime, the young Spaniard concentrated on improving his extreme enduro skills and the results were evident. Strong finishes throughout the year were highlighted with a victory at the Hawkstone Park Cross-Country in the UK. With a season’s WESS experience now under his belt, Garcia will be aiming to maintain his solid run of results into 2019 and challenge for the title.

Josep Garcia: “Last year I started the season with a lot of motivation but the extreme races were all new to me and it took a little while to change my style to suit them. I was happy with my result at the end of the championship but for this year I hope to do better. I had some surgery on my knee over the winter, but now I am fully fit and have been doing a lot of training on all types of terrain for the WESS races. I am really looking forward to the first round in Portugal, it’s an incredible event, especially racing through the streets of Porto. If I remain consistent at all rounds and try to improve on my extreme results, I am confident of a top-three result at the end of the year.”

Fresh after his third-place result in the 2019 Superenduro World Championship, Taddy Blazusiak comes into the second year of WESS as the most experienced rider on the KTM Factory team. With his 2018 WESS campaign dogged by injury, he is now feeling strong, back to his best and ready to take on the eight-round championship.

Taddy Blazusiak: “2018 was my first year back from retirement. It wasn’t an easy decision to make but with the arrival of the WESS championship it was an opportunity I couldn’t miss out on. I suffered a couple of injuries last year and that hampered my results a little. I feel a lot more confident this year though and I’m ready to do my best in all the races. I don’t really have a favourite event but I really like the general schedule – it’s definitely a great concept and really good for the sport. I have been training hard and trying to find good set-ups for all of the races on the calendar. Lagares was a tough one for me last year but I know if the three days go well, I am capable of a strong result.”

Runner-up in last year’s WESS opener at Extreme XL Lagares, Jonny Walker will be looking to go one better this year. The British extreme enduro specialist was leading the 2018 WESS championship going into round five when a crash while leading Red Bull 111 Megawatt not only ruled him out of the event, but also the rest of the championship. Despite the retirement, Walker had amassed enough points to finish the championship in ninth place. Now close to being fully fit, Jonny is looking forward to getting stuck in to Extreme XL Lagares and the 2019 WESS championship.

Jonny Walker: “I’m really looking forward to this year’s championship. Things were going so well for me last year until the crash so I know if I approach the races in a similar way I should be in with a shout for the title. Overall, fitness-wise I’m feeling pretty good right now although I have had a little trouble with my wrist. I have raced a couple of events so far this year and they have gone well so I know my pace is good. The plan is to see how these first three races go as they are really close together and then hopefully build things up toward the end of the season where I think I will be a little stronger. Every single point is important in WESS, so good consistent results throughout the year are critical.”

The 2019 World Enduro Super Series kicks off with round one – Toyota Porto Extreme XL Lagares – on May 10-12 in Porto, Portugal.