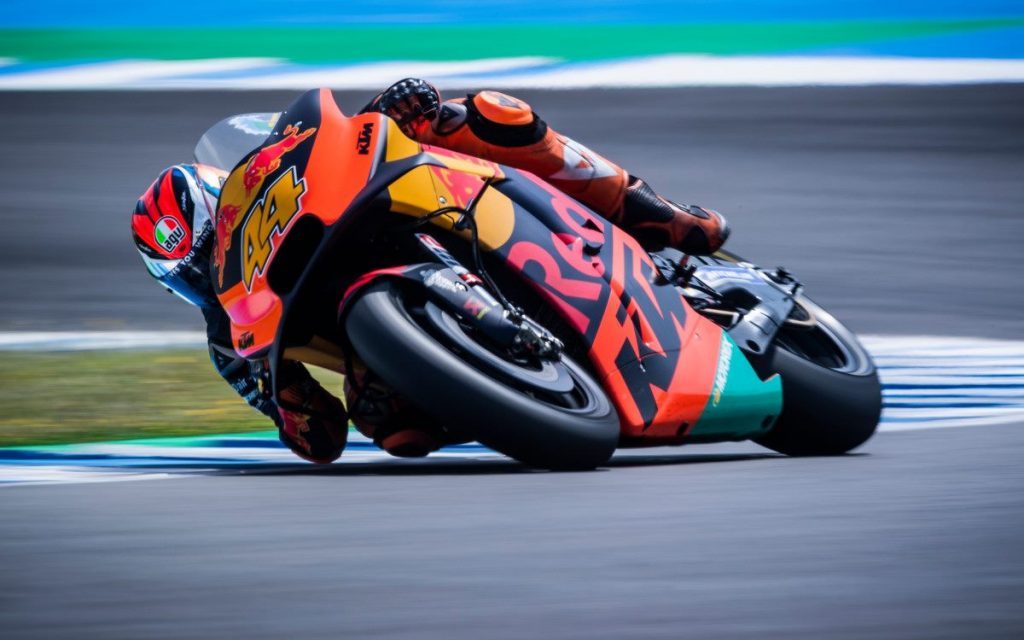 The Circuito de Jerez-Angel Nieto was much quieter and the bustle was significantly slower twenty-four hours after the fourth round of 2019 MotoGP but the pace barely eased on the track itself. Riders and team continued to wring throttle grips around the 4.4km layout for what was the first official test session of the season. Red Bull KTM and Red Bull KTM Tech3 were busy working through more new components, parts and ideas direct from the crew at the factory in Mattighofen in an effort to refine the RC16 race machinery.

Highest on the time sheets at the end of another sunny day at the famous facility was Pol Espargaro with a lap-time 0.7 away from the fastest effort logged by Fabio Quartararo. The Spaniard, who finished 13th in Sunday’s 25 lap affair, completed 63 circulations and made progress with engine settings among other details. Teammate Johann Zarco pushed his new chassis through further adjustments and modifications to improve corner entry and feeling. The Frenchman was 16th after 71 laps and 1.5 seconds from Quartararo.

Miguel Oliveira rode 77 laps and placed 21st while Hafizh Syahrin, who toasted his 25th birthday on Sunday, was 22nd.

Red Bull KTM will take a break tomorrow and then embark on another day of private testing on Wednesday to wrap-up their activities at Jerez.

Pol Espargaro: “Tiring day but happy with the result. KTM have worked very hard in the winter and delivered some things that we could not test until Le Mans and here because of the overseas races. We improved on some areas of the engine and also the chassis and found a good balance. We tried different configurations and I think with what we did on the engine we have more room to play, which is good. I’m happy we keep developing and keep improving.”

Johann Zarco: “I expected to have a good day and after a race it is useful to be on track again and have a reference from the weekend: after just three laps you are ready to start the work. We tried things looking for confirmation for the technicians and that means a bit of up-and-down and it can be hard to have a consistent feeling. Fabio did an amazing lap-time with that new rear Michelin and I tried it too and had a small improvement over qualifying. Anyway, many laps done and lots of information for the team. We made a little step to let me have more feeling on the front into the fast corners, and from that we tried to improve the rear and could work there.”

Miguel Oliveira: “Today was quite long as we had many things to test but finally it has been positive because I was much faster with the ‘race condition bike’ than yesterday. I just missed the fast lap at the end. We tested things here which we think have great potential to help me in the future.”

Hafizh Syahrin: “Today has been a very positive day because we did a big step compared to last weekend. During the Grand Prix I was struggling, the condition of my body was not good and on the last day, I just found a good feeling with the bike. In the race I set my fastest time. During the test today, we tried some new parts, which were better for me but so far, we are not able to use the advantage of the new tyre for the corner speed. We found a very small improvement, so we still need to get better with the bike.”

Mike Leitner, Red Bull KTM Team Manager: “All the comments from the riders over the winter and pre-season tests arrived for this chassis and engine work today at Jerez. We had some positive points and in general the result was good. We had a new rear tyre from Michelin which allowed everyone to go fast but we also had some good times on race tyres and were in the top ten. Pol did a great job and Johann improved his feeling but he’s still not 100% happy with the handling so we’ll continue working in the private test on Wednesday.”

Sebastian Risse, Technical Director MotoGP: “Today we had quite an intense and productive test. Of course coming to it right after a race is the best way to know where you are. With Pol we made decent steps forward and I think the final lap-time shows that. We hope we can carry these parts into racing soon. With Johann we are struggling a little bit more to match his riding style to the bike. We are constantly trying loops in different directions and we used today for that: not only hardware but also in riding and the set-up of the bike. We want to make a bike for him, not match him to the bike, but that means we need to build up understanding of what is good for his style. So we worked through parts and a different point of view. We have one more day to put this together and I hope we can make a step there and bring him forward.”