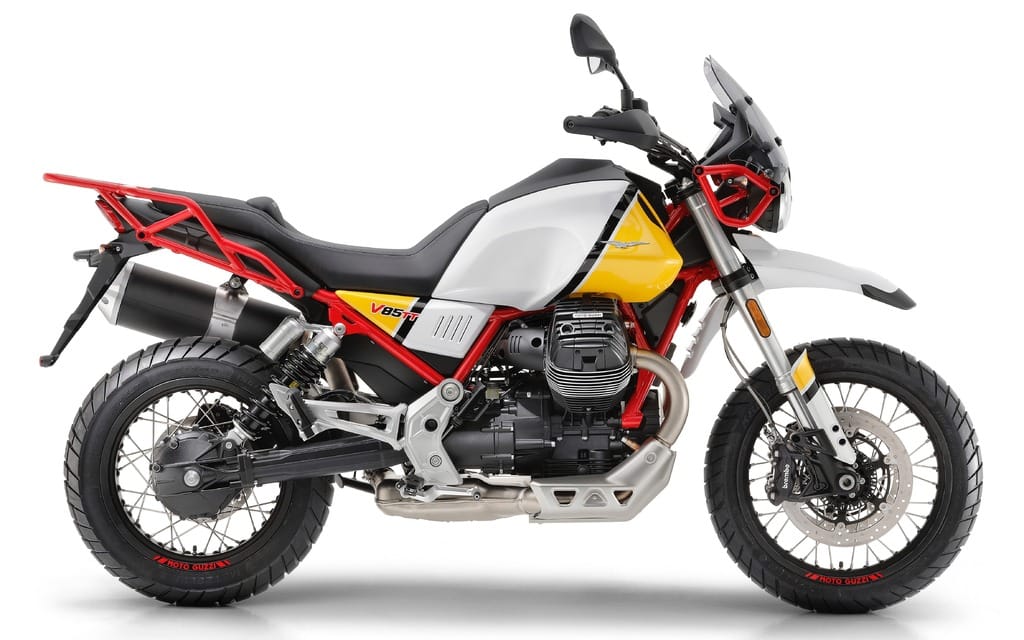 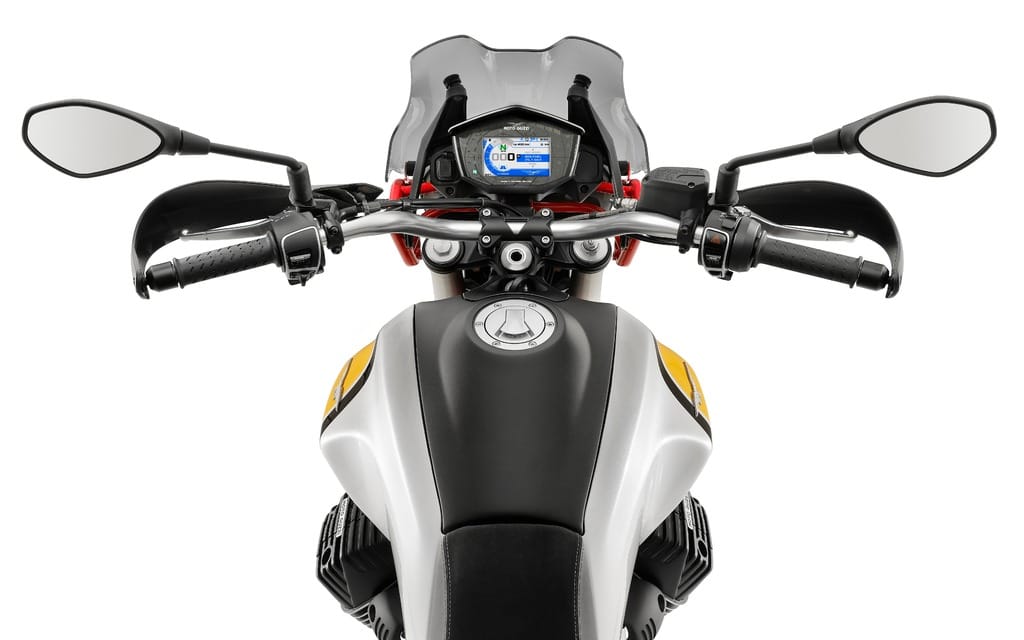 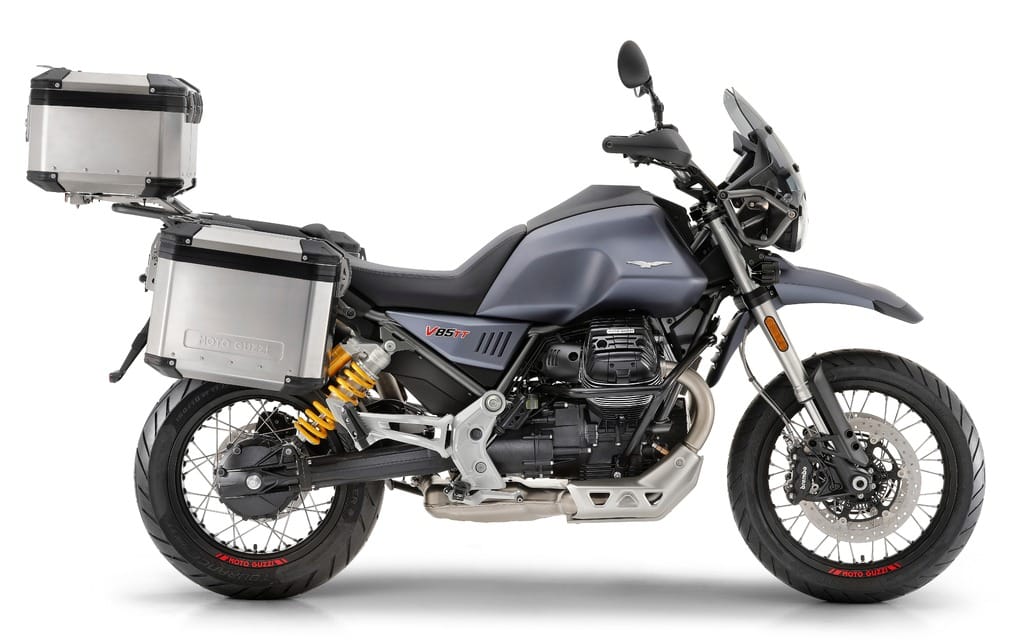 MOTO GUZZI TAKES A STEP TOWARDS THE FUTURE, A HOMAGE TO THE QUINTESSENCE OF TRAVEL, DEDICATED TO MOTORCYCLISTS WHO DO NOT STOP WHEN THEY REACH THE END OF THE ASPHALT

ANNOUNCING THE 80 HP TWIN CYLINDER, THE NEW TECHNICAL PLATFORM AROUND WHICH MOTO GUZZI WILL BE DEVELOPING A NEW FAMILY OF MOTORCYCLES
Moto Guzzi has been producing authentically Italian motorcycles since 1921. Nearly one hundred years of tradition and passion; almost a century of magnificent motorcycles all built in Mandello del Lario, combining the best technology and Italian manufacturing. The next goal for the Eagle Brand is to celebrate its 2021 centenary with an ever-expanding range of motorcycles.

The V85 TT is a vision of the future, the next challenge for a brand that aims to offer enthusiasts a wider range that meets every need. The V85 TT is born out of the best Moto Guzzi tradition, which is the true founding value of the Mandello-based manufacturer and it is built around an entirely new engine that guarantees increased capabilities of riding and enjoyment. It is the motorcycle that was needed by an increasingly standardized market dedicated to travelling in its purest form, recalling the epic rally raids of the 1980s, a point of reference from which it inherits style, charm and thus emotion, but which has been designed to take on both everyday routes and long-distance routes, using the most up-to-date requirements.

In its travelling version, the V85 TT is a new and original offering that combines stylistic features reminiscent of the golden age of motorbike adventures with the content and functionality of a modern touring enduro and it is part of the natural evolution of the Larian brand and its motorcycles.

Travelling as a way of Life, the V85 TT is an Adventure Every Day
Moto Guzzi boasts a solid off-road tradition: the first proof of this arrived at the Six Day Reliability Trial in 1939, which took place in Austria, where Moto Guzzi participated with the GT 20, winning four gold medals. The true season of reliability continued in 1957, with the Lodola Regolarità, and then with the Stornello Regolarità in 1962. With this tradition, Moto Guzzi took on the Paris-Dakar in 1985 with the V65 Baja and the following year with the V75 Baja, based on the standard models, appreciated for their lightness and the characteristics of their engine, which was robust and reliable.

The V85 TT is dedicated to those who, while never ceasing to dream of Dakar, yearn for a bike that revives the spirit of adventure on their daily journeys. Moto Guzzi prefigures a modern motorcycle, fully equipped and with a strong character, but also a pure and essential motorcycle with its shapes that originate directly from Moto Guzzi’s own history.

Style: V85 TT is the Classic Enduro
The design is the meeting point between technology and functionality with a classic Moto Guzzi style, designed to remain timeless as well as defining the V85 TT as the Classic Enduro dedicated to tourism.

Designed with proportions that are anything but prohibitive, accessible for riders of all sizes and experience, tight in the waistband to allow freedom of movement, the V85 TT boasts an optimal ride for pilot and passenger. No compromises have been made to the detriment of comfort and usability, resulting in a comfortable bike for two, with bags installed on the chassis frame. The fuel tank design harks back to the tradition of the Moto Guzzi models set up for the African rally raids. In line with the Guzzi story, there is also the high front mudguard and the beautiful double front headlight, stylistic and functional solutions already present on the NTX 650 from 1996 and the Quota 1000 from 1989. Modern technology elements – such as the fully digital instrumentation and the front LED DRL light series on the front headlight – combine classic styling with the off-road world.

Character, Lightness and Ease of Use
Moto Guzzi’s expertise in the construction of outstanding motorcycles is also confirmed on the V85 TT. The frame is completely new; in pursuit of lightness, rationality and accessibility, it is made of steel tubes and exploits the specific anchorage of the engine to create a rigid structure that restores precision and rigor on the road as well as robustness and the right feel for off-road riding. The beautiful asymmetric aluminum swingarm has a curved shape on the left side, useful for designing a highly linear exhaust pipe pattern so as to minimize the lateral dimensions. The right arm on the swingarm houses the new shaft drive transmission. The monoshock absorber directly connects the chassis to the right arm of the swingarm, a solution that facilitates access to the hydraulic and spring preload adjustments, thus allowing free space for the exhaust system layout. The suspension systems offer a very generous wheel travel for optimal off-road use, thanks to a substantial engine floor clearance, as well as comfort on the common roads.

New Engine, a Classic for the Future
A new Moto Guzzi engine is being launched in the V85 TT. The construction design is proprietary and excludes all current Moto Guzzi production: in fact, it is a two-cylinder 90° transverse air-cooled 850cc which has 80 HP of maximum power. It is an engine that, fully in line with Moto Guzzi philosophy, announces itself as a classic for the near future, providing rewarding performance on every kind of route, as well as guaranteeing great character and the usual spectacular force at lower running speeds.

The technical platform of the V85 TT, including its mechanics – as always leveraged inside the body of the vehicle, with all its beauty being deliberately left in sight – is the technical basis for the development of a series of new motorcycles. A family of medium-sized cylinder bikes, from different intended uses, combined with strong character, generous performance and a style which is typically Moto Guzzi.