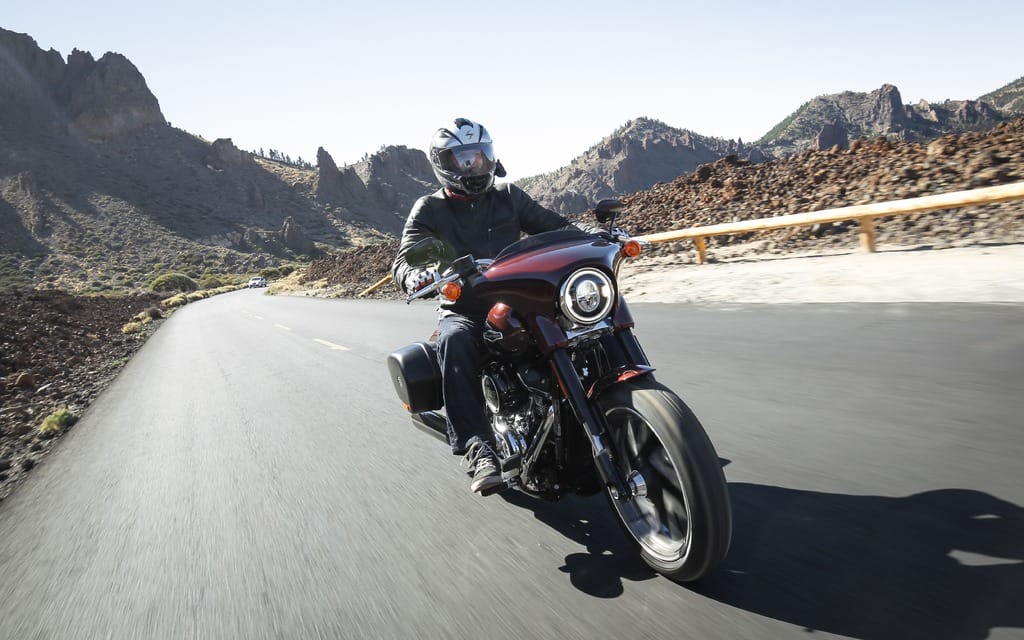 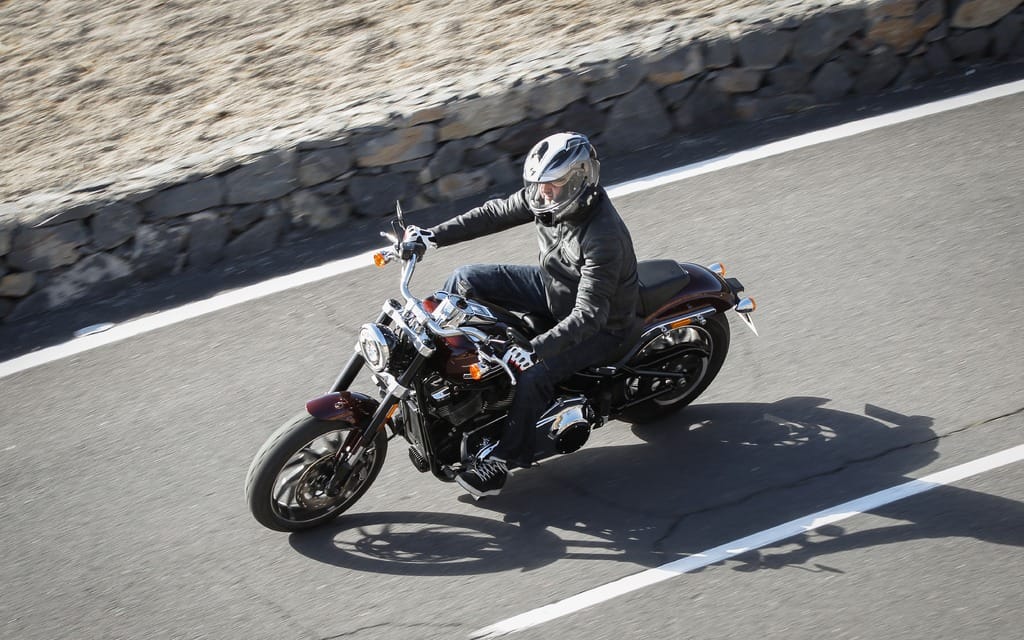 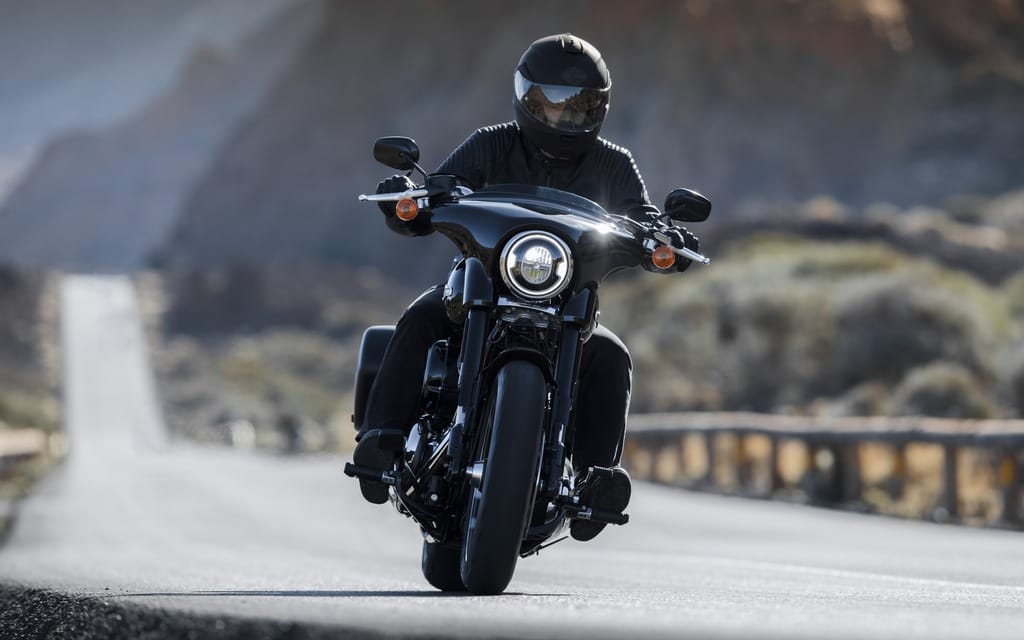 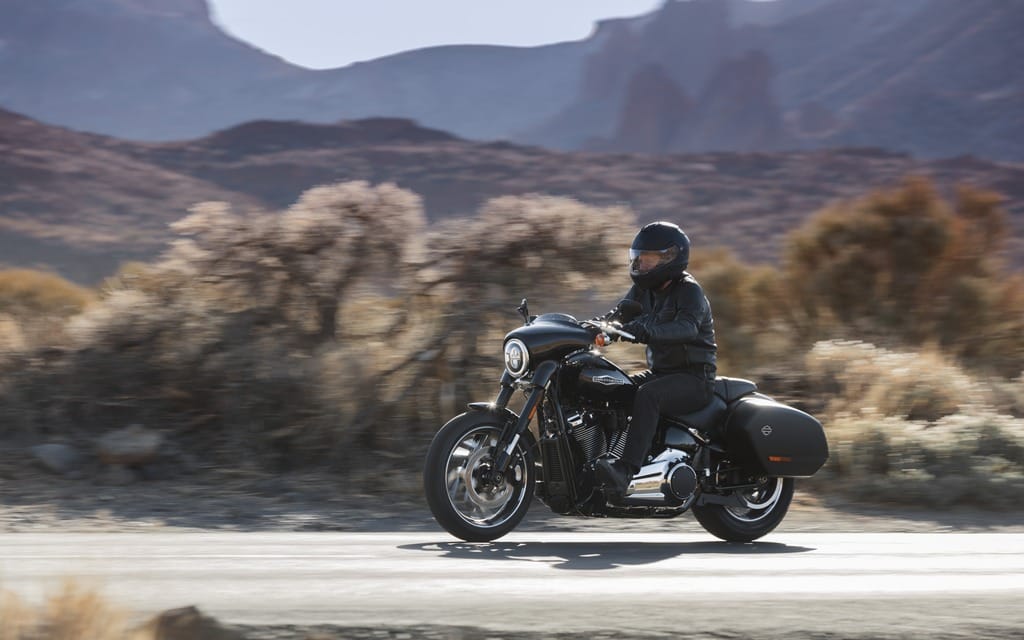 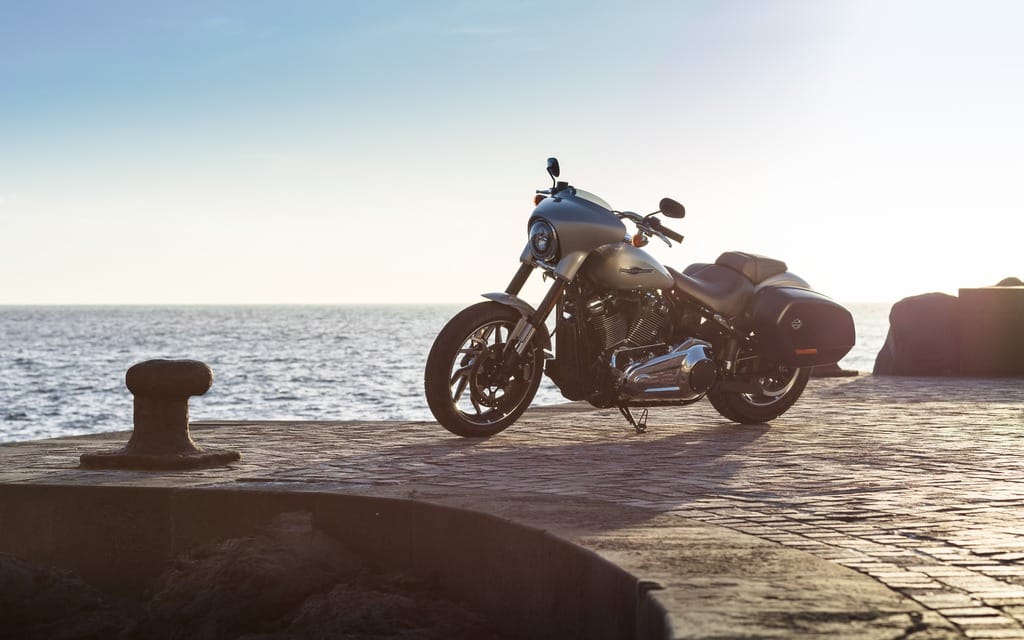 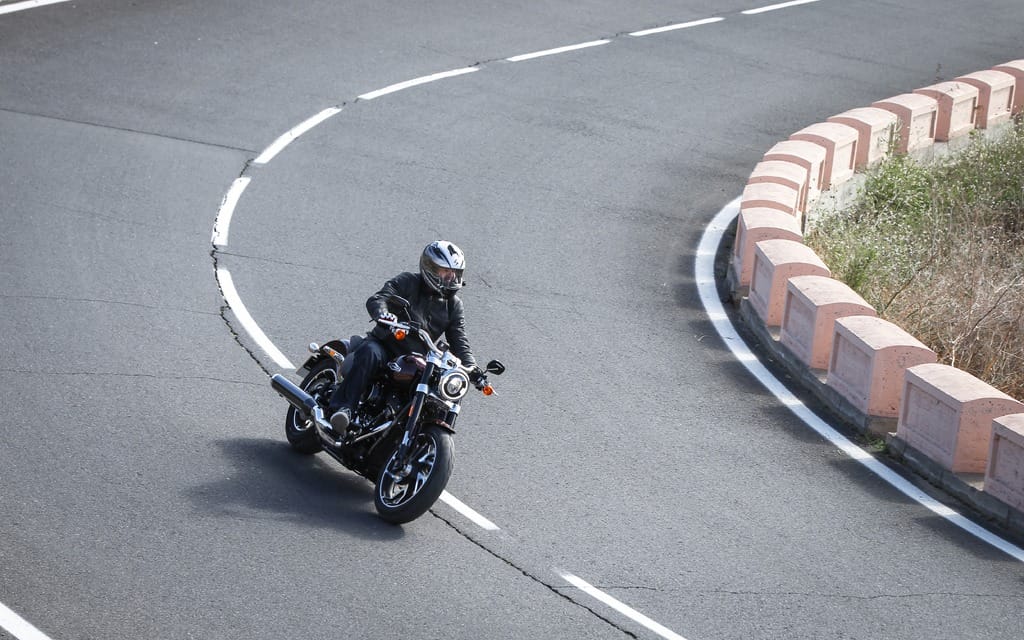 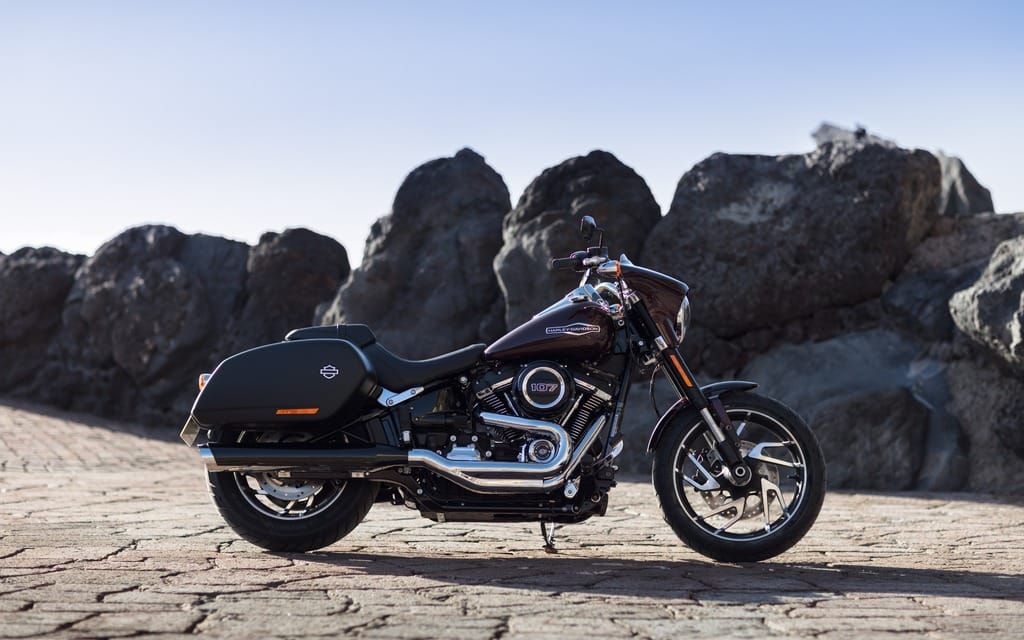 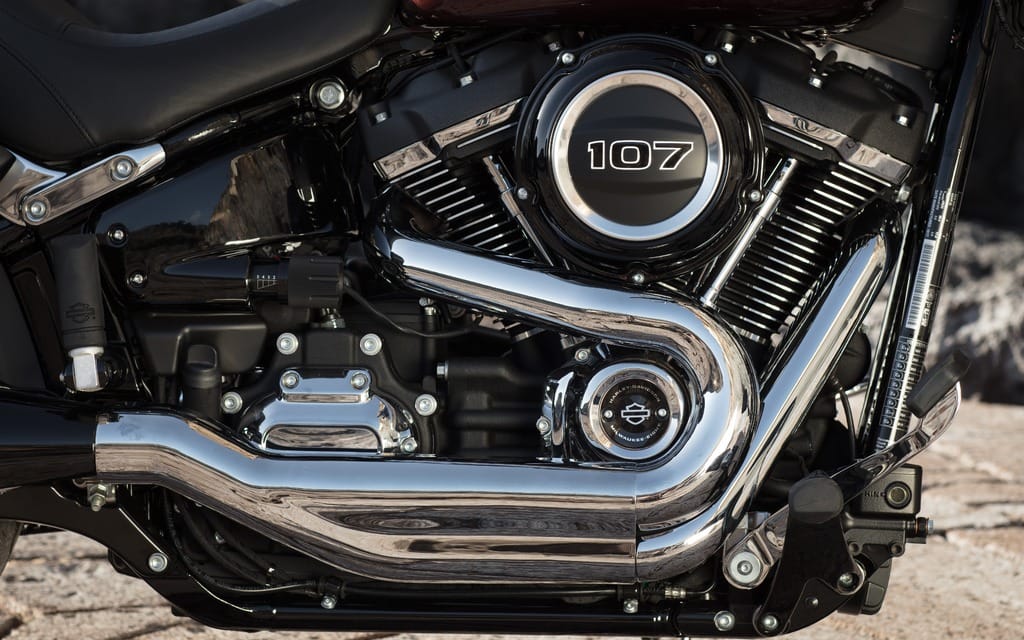 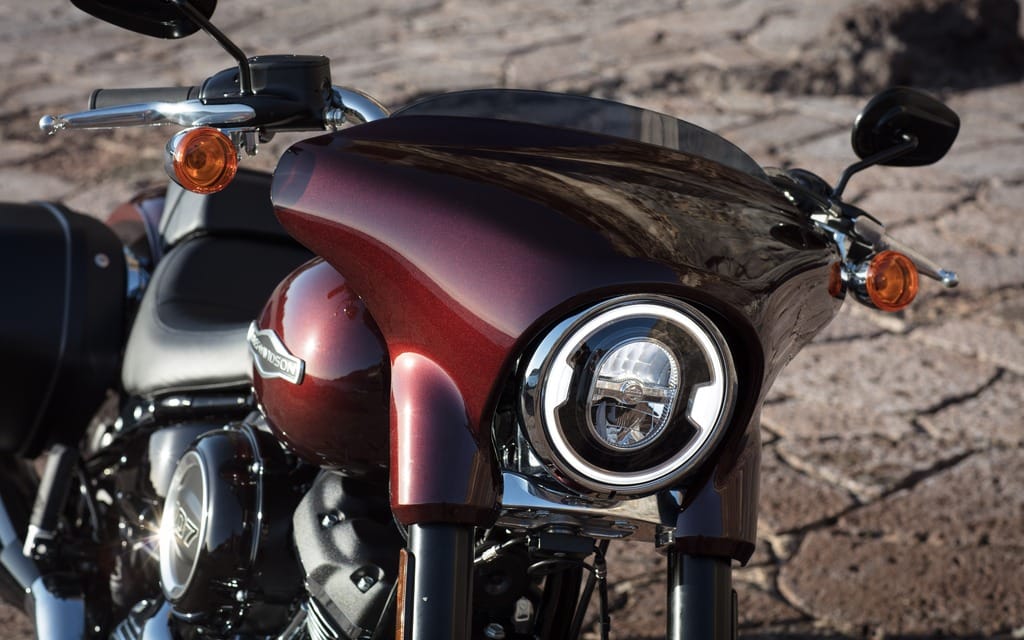 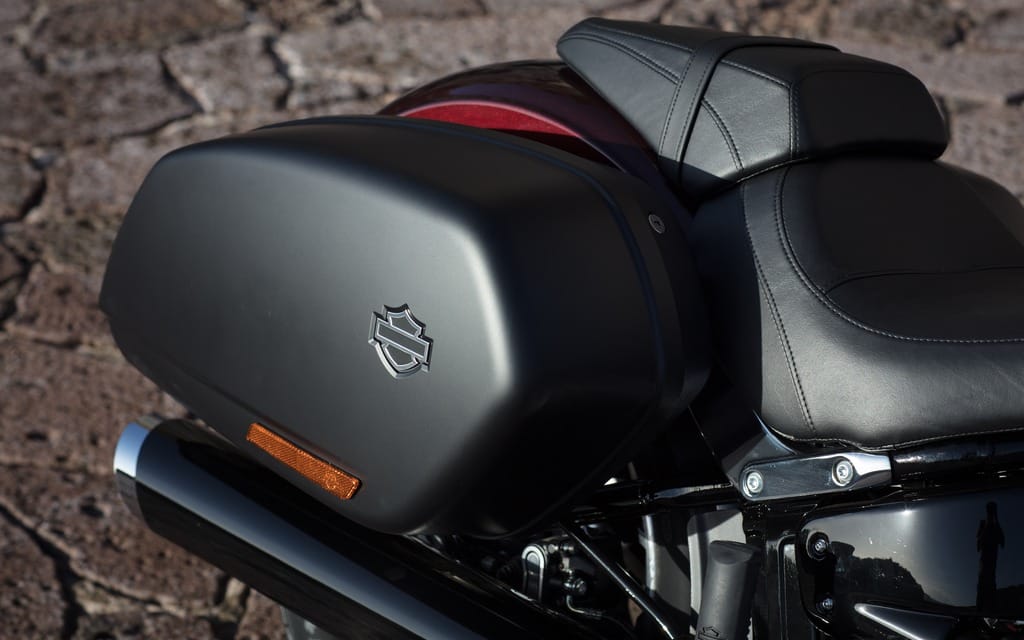 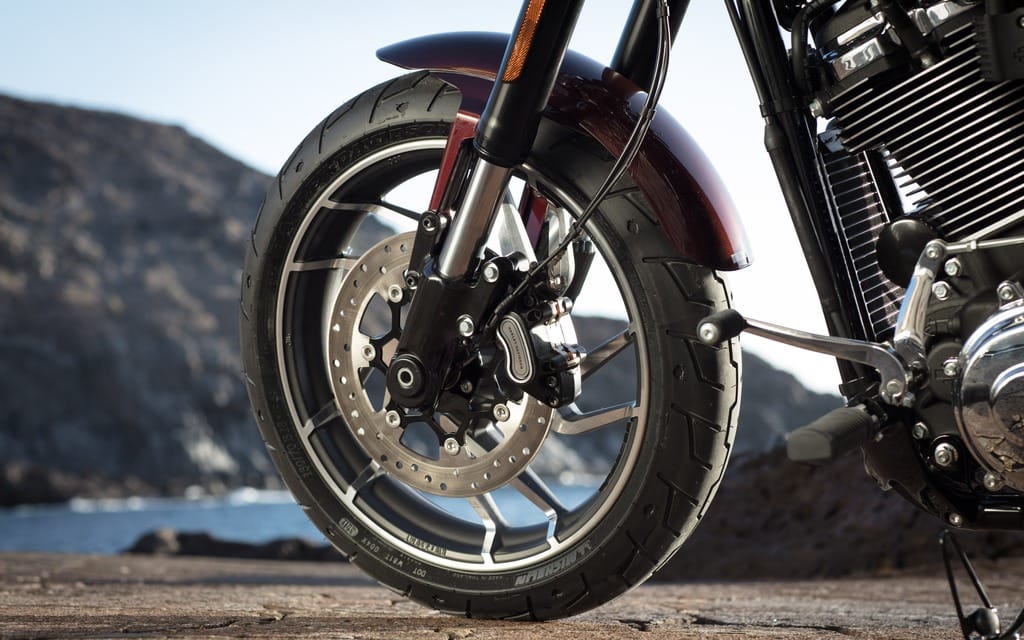 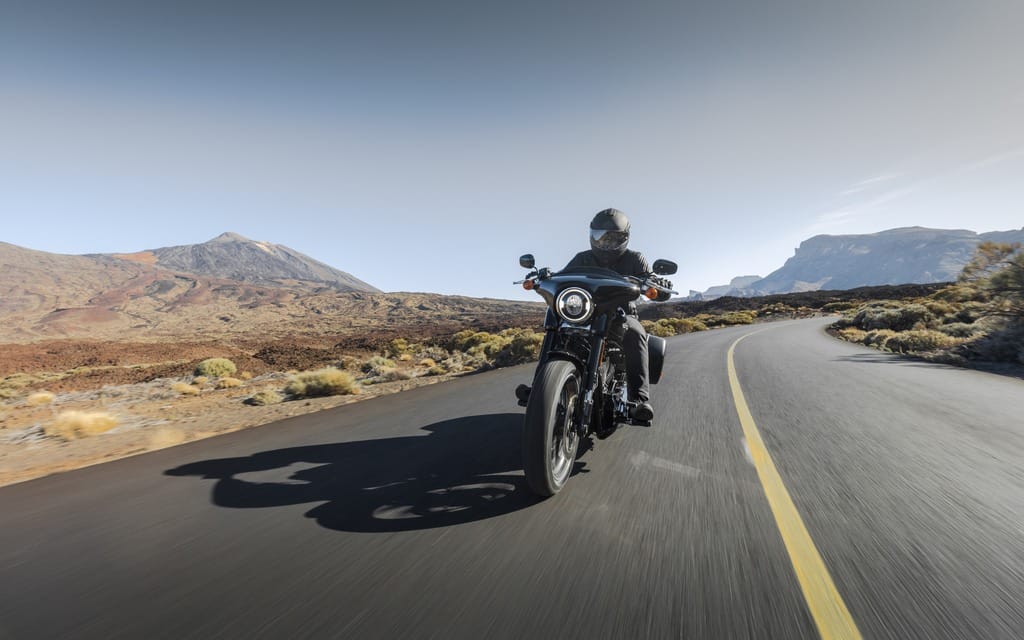 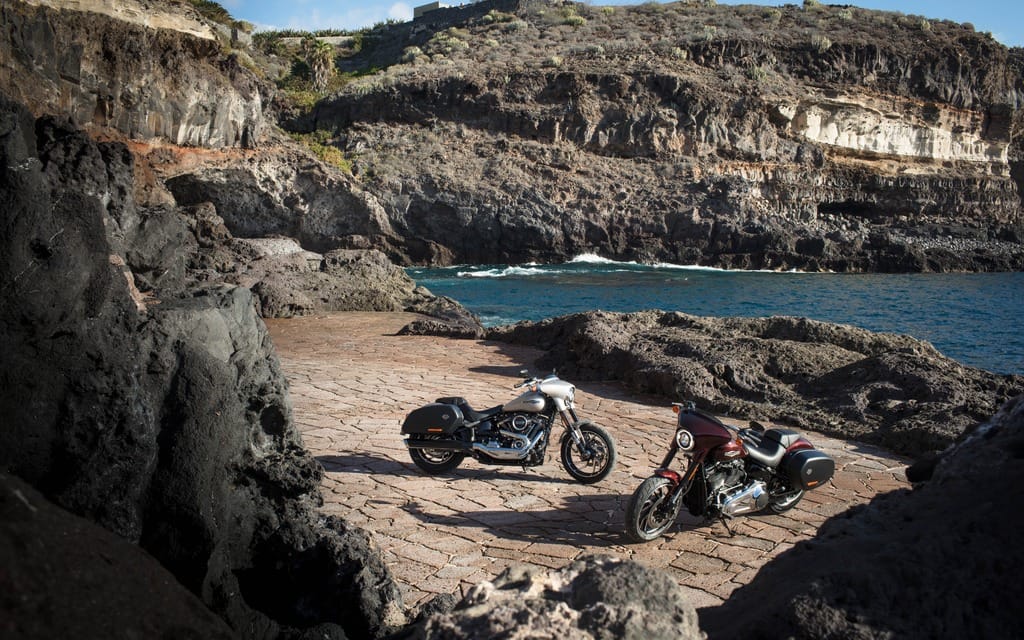 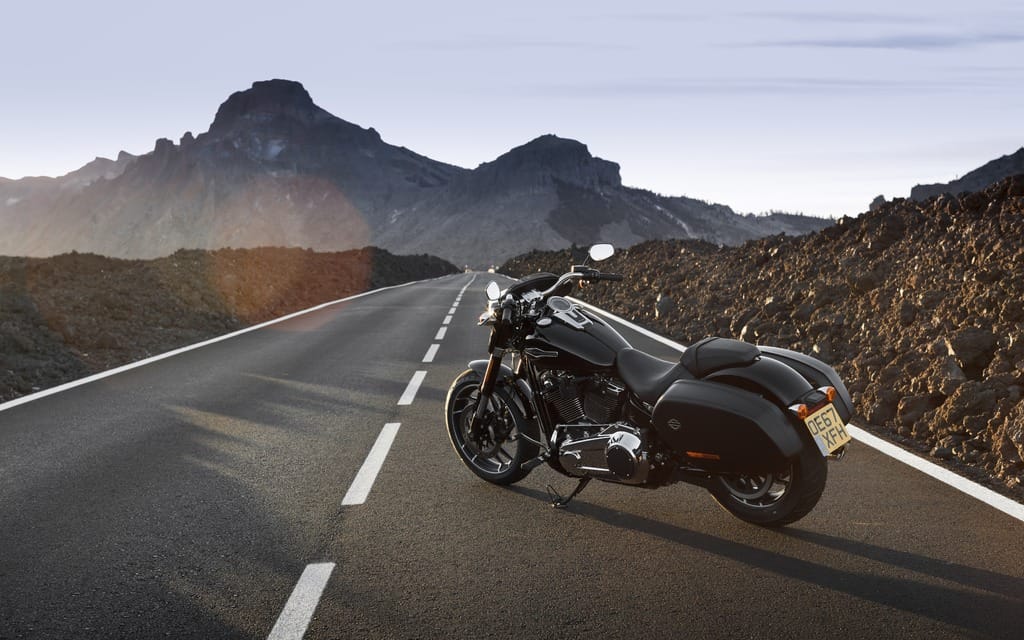 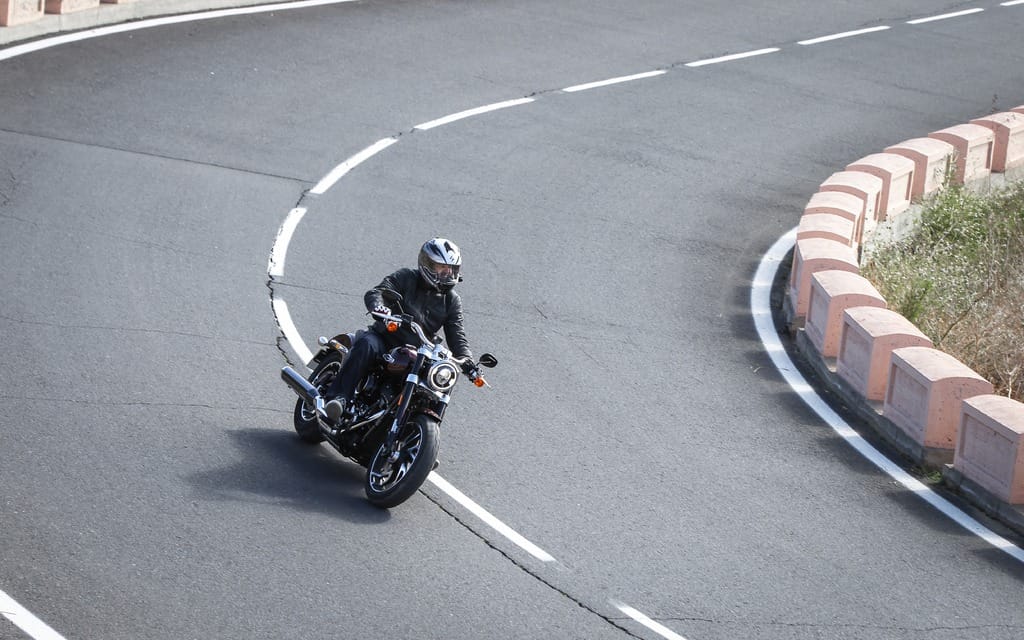 A SPORT BIKE IN SHEEP’S CLOTHING
by Jean Paré
It’s not often that two colleagues get to ride the same new model at the same time but in different countries! That is the opportunity we had, David and I. A few weeks ago, I got to ride the all new Sport Glide 2018 in Tenerife, Spain, and he was doing the same in California.

If you invite me to drive a new Harley-Davidson model in a warm country while we are freezing here in the middle of winter, I’ll always say yes!

So on a nice but cold — make that freezing cold — day, I left home for the airport. Destination: the Spanish island of Tenerife in the archipelago of the Canaries. That’s in the Atlantic Ocean, just west of Morocco. Tenerife is the largest and most populated island of the group, with 908,555 inhabitants; looking down at you at all times is the volcano Teide, the highest peak of all the islands of the Atlantic Ocean, at 12,198 ft (3,718 m).

Some five million tourists visit the island each year, which make for a significant contribution to the local economy. The other main source of revenue is agriculture with among other things bananas, tomatoes and cucumbers. Santa Cruz de Tenerife is the largest city and the capital of the province.

After a stopover at Amsterdam, we finally land at one of Tenerife’s two airports where I meet my Canadian colleagues. We then head right to the hotel, eager to finally eat proper food and have a warm shower.

The next morning, we are treated to a generous breakfast and a short presentation of the all-new 2018 Harley-Davidson Sport Glide. Next, we’re off to the parking lot in front of the hotel where our machines await, shining and nicely lined up. We will be leaving in small groups of six riders. The weather is perfect, 22 degrees, but we are told to bring along warm clothes because we will be driving the volcano road, and the temperature is seven to eight degrees lower up there.

I start my ride on the Sport Glide with its saddlebags and “Batwing” fairing on. The interesting thing with this bike is that it’s a two in one. In no time at all, you can remove the saddlebags and the fairing, and voilà!, you get a naked bike that looks a lot like a Fat Boy. Dress it up again, a 30-second affair, and you get the Street Glide’s little sister.

With the key fob in my pocket, I press the starter button and the Milwaukee Eight 107 comes alive. The new two-in-one exhaust system makes a nice deep sound. It is now higher above the ground to allow for a better lean angle. We begin our journey on a highway section that invites me to test the kind of power this big V-twin can deliver. The answer is: very satisfying, and no doubt this engine offers ample power for this type of road. I try to stay focussed on the motorcycle and its performance but it is difficult not to be overwhelmed by the magnificent scenery. It is somewhat barren because of the lava from the last eruption of the volcano, but still beautiful.

After a while, we leave the highway and enter the curvy road at the bottom of the volcano. We start climbing and I try to have a quick look at the scenery between the countless curves. This is going to be a physically demanding day. But the Sport Glide is surprisingly at ease on these roads. Under its touring looks is hidden a versatile sport bike with an inverted fork and ABS brakes. Speaking of brakes, there is only one disk on the front; a second disc would certainly enhance the stopping power. I drive through the S-curves as if I was riding on a Sportster, and it works. I really enjoy the redesigned chassis and suspension on these new Harleys.

We stop for a break in a restaurant with a view of the volcano as a background. I understand why there are so many tourists on this island: the scenery is absolutely superb, the roads are great and the sea is a breathtaking blue-green color.

After lunch, we are back on the bikes for the serious climb. As the kilometres add up, the temperature does the opposite, and clouds begin to move in. But the view is still extraordinary and I can’t help taking tons of photos. After a stop for more pictures and a video taken from a drone, we head back to the hotel. The road down gave me another opportunity to test the abilities of this motorcycle — and mine. That was great fun. I must say though that at times, while passing or climbing steep sections of road, I would have liked to have a little more power at hand, from a 114 powerplant, for example. Unfortunately, this option is not offered on the Sport Glide.

When we arrived at the hotel, we decided to treat ourselves with a ride to the sea side with our bikes: what a fantastic moment! The people on the beach were intrigued and quite a few of them came our away to look at this collection of Sport Glides.

Since all good things must come to an end, we had to go back because the tide was rising and we did not want to get caught in the sand and salt water with the bikes. My guess is that the people from Harley-Davidson wouldn’t have appreciated that.

Even if I had to spend hours and hours in planes and plane transfers, I certainly appreciated Tenerife and would very much like to go back. But this time I would go for many days to be able to really enjoy the place, and ride a lot more! The 2018 Sport Glide is a motorcycle I really liked. Its versatility makes it fun for day-to-day commuting as much as for travelling. Indeed, you will feel like you bought two motorcycles for the price of one. With its base price of $22,299, it is much more affordable than a Street Glide, although still more expensive than comparable models from other makers. Let’s hope this model will have a better fate than the discontinued Dyna Switchback. Personally, I think you will see a lot more Sport Glides on the road than in the showrooms.

LOOKS BETTER DRESSED BUT CAN THROB WITH THE BEST
by David Booth
Harley-Davidson must be feeling some heat. Just six months ago, The Motor Company unveiled its biggest market shift in years, the combination of Dyna and Softail into one lineup, highlighted by eight brand-new or completely revised models.

Yet, unlike previous unveilings of all-new lineups, there has been no standing on laurels, Milwaukee recently taking the wraps off a ninth new model in the rejuvenated Softail platform. And being late to the party might have given the new Sport Glide a leg up, the extra six months of development perhaps the reason that the new semi-sport-touring big twin is the best of all the 2018 Softails and one of my favourite Harleys of all time.

The first thing I noticed — before even leaving the California distributor’s parking lots — is that the Sport Glide’s saddlebags are more accommodating than the new Gold Wing’s. Note that I didn’t say commodious. As you’d suspect, even the 2018 Wing’s newly downsized luggage carriers are larger than the Softail’s. But, while the new Harley luggage — with damped lids, no less! — is definitely smaller, the bags are better shaped inside than the misshapen side bags on the new Wing. I could fit my laptop case easily inside the Sport Glide’s bags; not so with the new Wing’s. More importantly for the intended audience — that would be those looking for stylish weekend getaways if I am reading Harley-Davidson’s marketing drivel right — I easily fitted an entire airline carry-on’s clothing and the aforementioned MacBook into the two saddlebags and had room left over for rain gear. Practical, lockable and stylish — well done, Harley!

Better yet, like Convertible models past, said bags — as well as the “Batwing” fairing — are easily removable. A couple of latches and the Sport Glide is, well, naked as a Softail. Harley implies that removing the bodywork makes the Sport Glide more stylish though I, for one, found it much more attractive fully dressed. Considering that previous “convertible” models have not proven popular with Harley loyalists, it’s probably a good thing the new Sport Glide looks so good with its clothes on.

Said Batwing fairing also provides passable protection. Deliberately sized to minimize wind pressure to the rider’s chest but leave the head in an unobstructed breeze, the fairing does both while producing very little turbulence around the helmet. Yes, you will get colder in a stiff breeze, but you may not go deaf without earplugs.

Onto more prosaic evaluations, Harley’s new Milwaukee-Eight engine really is a gem. Dual counterbalanced with, in this guise, a claimed 107.6 pound-feet of torque, the rigidly-mounted big V-twin is smooth when it needs to be, throbby when you’re looking for personality and responsive enough, especially with just one on board, to make the 114 version of the Milwaukee-Eight unnecessary. Indeed, there is no “114” version of the Sport Glide as there is for the Fat Bob and Heritage, but you can order a Stage IV upgrade from the Screamin’ Eagle accessory department that pumps things up to 114 cubes.

Equally impressive is the Sport Glide’s suspension. There may be only one cartridge damper in the two fork legs, but the inverted front fork is compliant enough over all but the largest bumps for serious roadwork. Ditto for the rear, which is Milwaukee’s top-line edition of its recent monoshock, complete with a frame-mounted hydraulic preload adjuster. Neither end has damping adjustments, but, for the intended use, the suspension is well-calibrated right out of the box.

The Sport Glide could use more brake, however. Like too many Harleys, the Sport Glide leaves the showroom with but one disc brake attached to the front wheel. That, according to Harley’s stylists, is so we can have an unobstructed view of the new Mantis front “directional” wheel, “the first of its style to come out of the Harley-Davidson factory on a non-CVO model.” Who in the hell gives a rat’s ass about a wheel when they can’t stop in time to stay out of the front grill of an 18-wheeler? Yes, the single disc is gripped by a four-piston caliper, but we want two of ’em.

The new Sport Glide is the best steering of all the new Softails. You’ll notice, again, I didn’t say “finest handling.” It lacks the ground clearance to make it a truly effective backroad weapon. But, unlike the Fat Bob which, despite its sport bike-ish styling runs on stupidly-sized cruiser tires, the Sport Glide’s 130/70-18 front and 180/70-16 Michelin Scorchers steer neutrally. Things may start scraping early, but you’ll have fun till you get there.

Probably most importantly, since it is ostensibly a sport-tourer, the Sport Glide is comfortable enough for weekend getaways. The rider’s portion of the seat, at least, is broad and flat, the reach to the handlebar, a semi-sweptback affair, is reasonable and the seat height is a lowish 673 millimetres. Were it not for my lopsided lower lumbars — which make any foot-forward controls uncomfortable after an hour — I’d be happy to while away the hours on the Sport Glide. And, if you’re not so afflicted, that basically negates my only criticism of the new Sport Glide.

Even the $22,299 price seems positively reasonable, about mid-pack in Milwaukee’s 2018 Softail lineup. It’d be the Softail I’d own and is, short of the Road King, the best Harley I’ve ever tested.