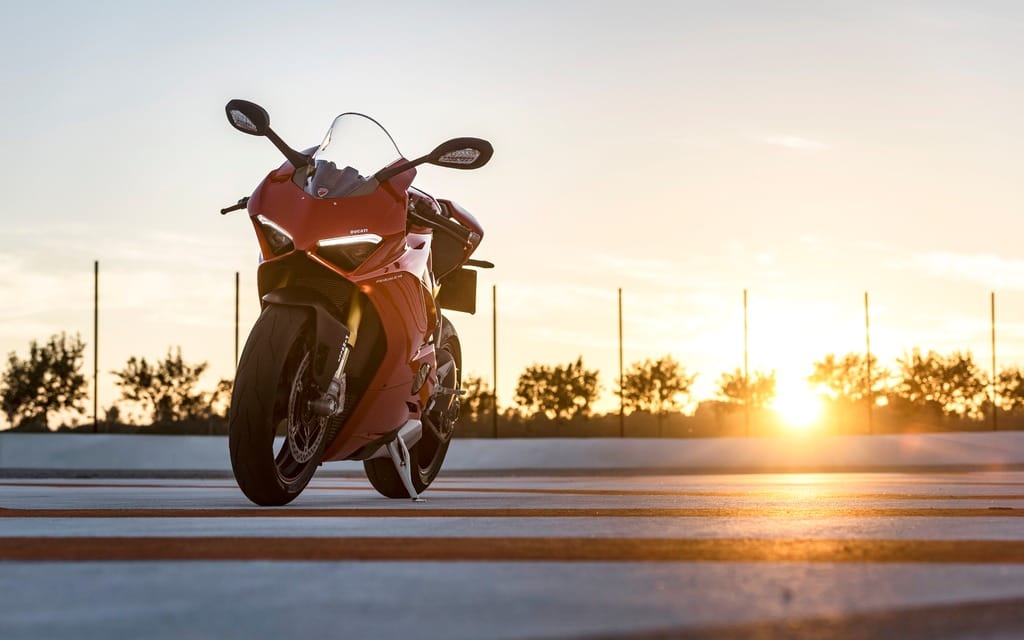 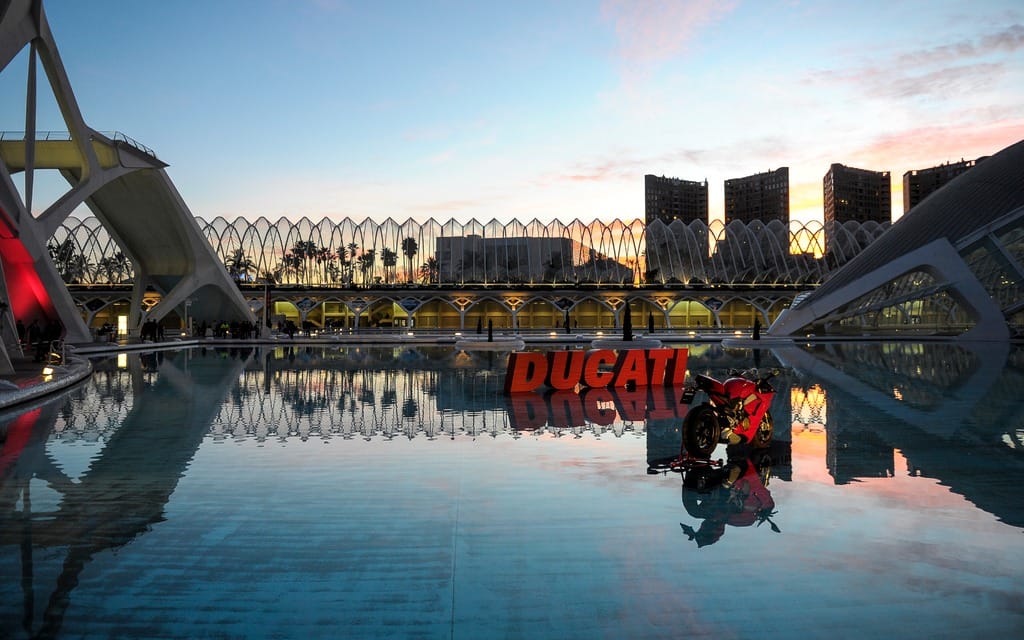 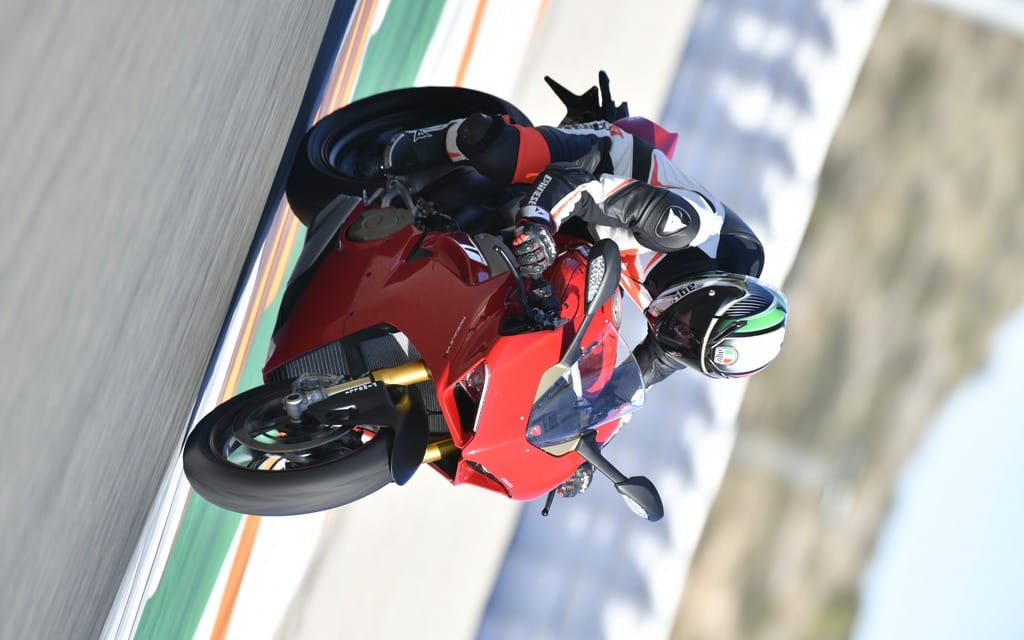 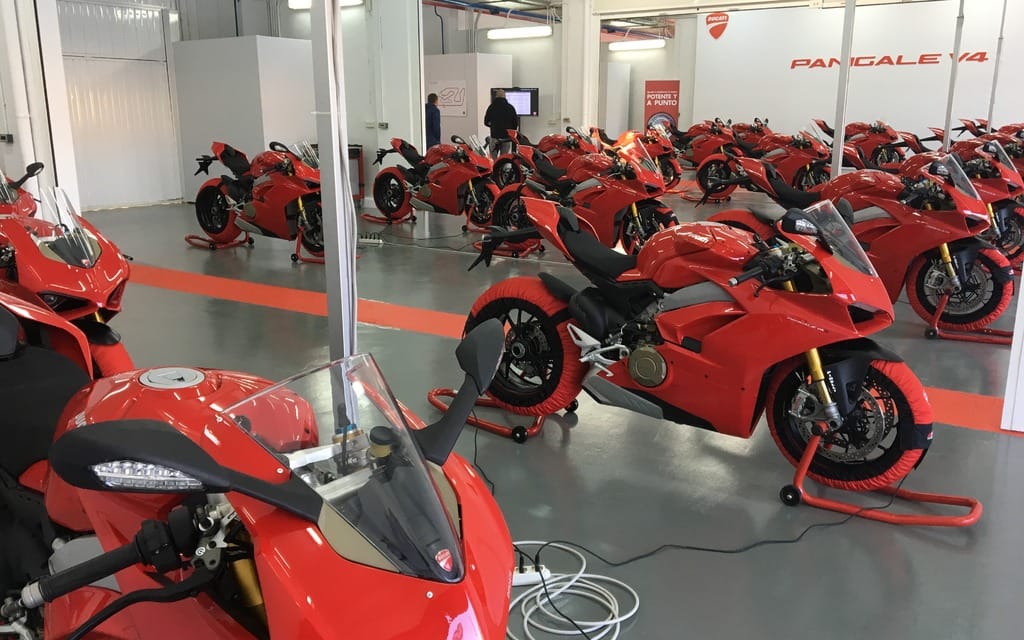 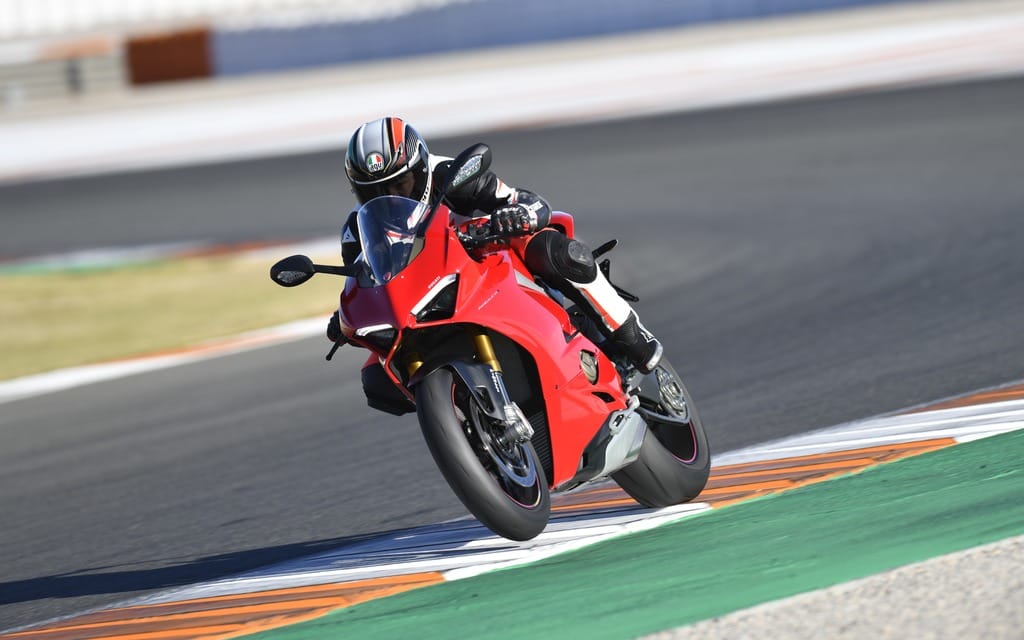 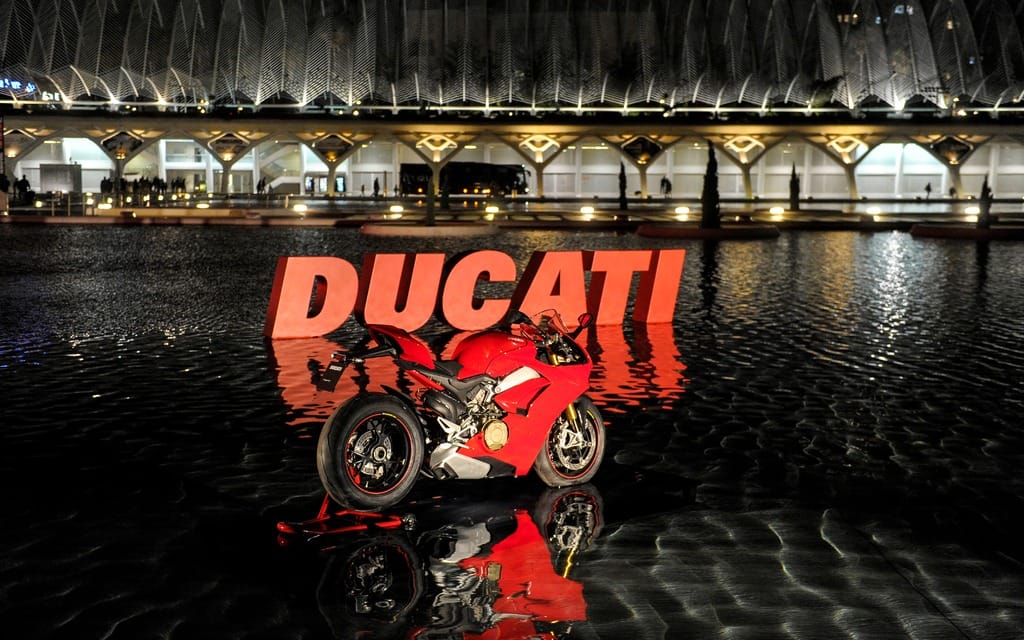 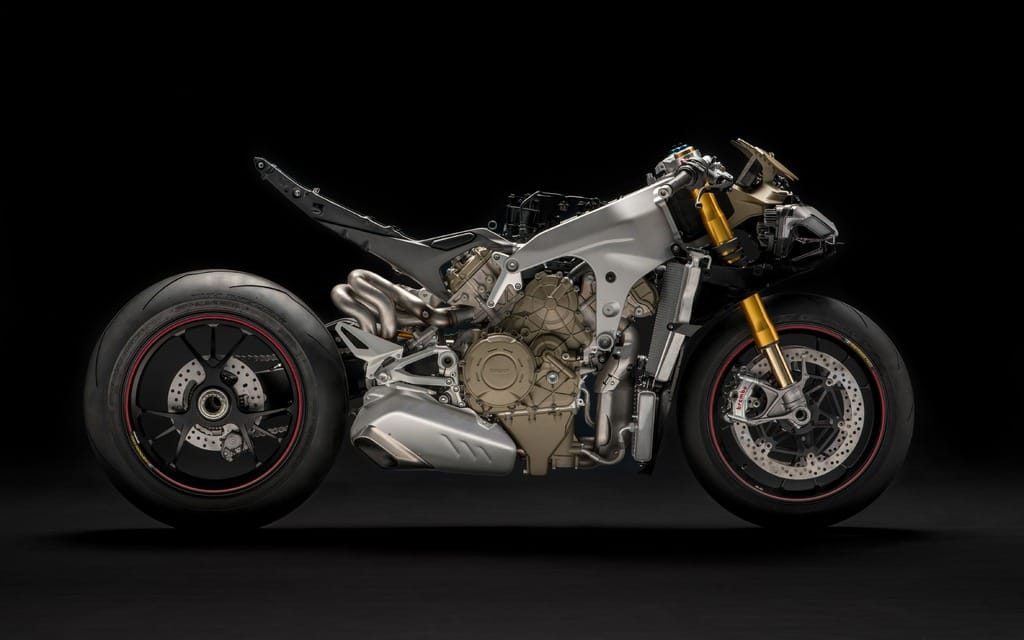 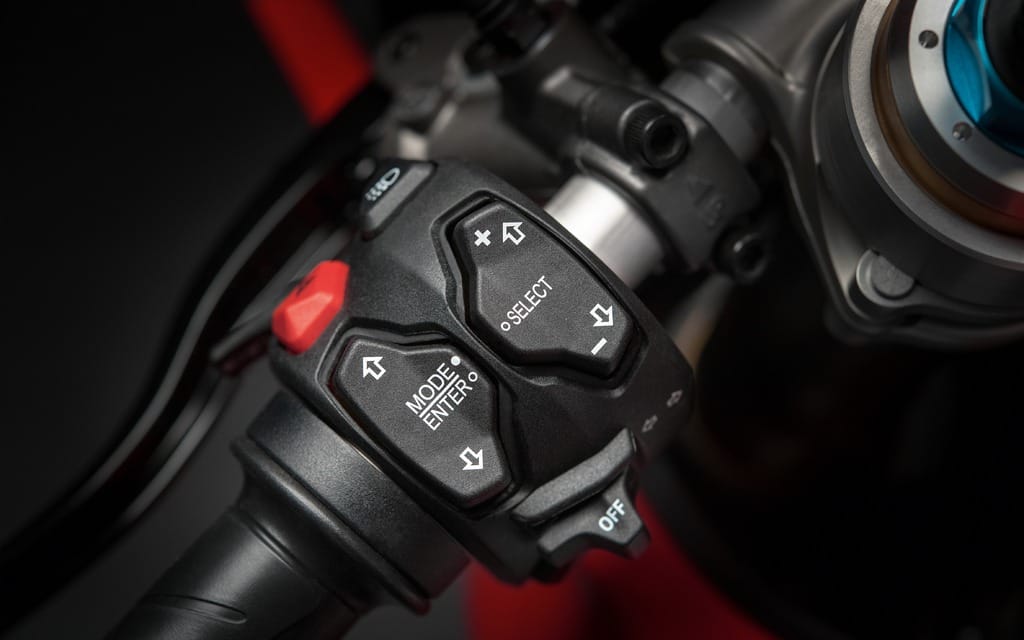 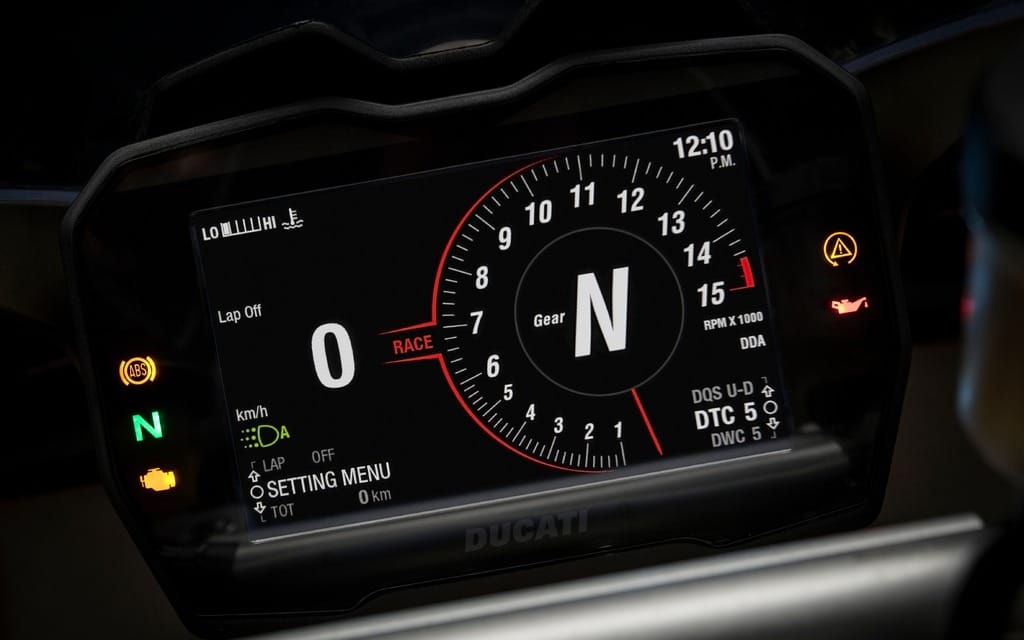 Welcome to their nightmare

After the Panigale four, everything else is chopped liver
I finally get to see the Panigale V4 up close. She’s petite, hardly any bigger than the V-twin Panigale 1299. From the bigger air intakes that dissimulate the LED headlights to the sculptural and sexy solo tailpiece (passenger seat and footpegs come in a box with the motorcycle) the Panigale lineage is evident but the lines are sharper. It is a gorgeous Italian steed, no question about it, but it is its song I want to hear. The Stradale V4 motor is based on the Desmosedici MotoGP racer, with twin-pulse firing order and all. The 214 horses that Ducati says it packs should make for an entertaining experience.

The presentation at the City of Art and Science in Valencia is where CEO Claudio Domenicali explains to us that it is time for Ducati to move on. The two-cylinder Superquadro motor is stretched close to its limit in terms of performance; a new design has to replace it. Despite a reputation built on the L-twin in Superbike racing over the years, the inspiration and technologies for the new platform come from the MotoGP operations side of the Corse department, hence the V4 that signals a crucial turn in Ducati high-end sportbike offerings.

On paper the Panigale V4 has a lot to offer: 214 hp in a compact chassis that tips the scales at a claimed 195 kg (430 lb) wet, equipped with all the best bits available and complemented by a full array of electronic rider aids. All that is needed now is to throw a leg over that piece of rolling mechanical art to see how it goes.

As I approach corner 11 of the Ricardo Tormo circuit I hesitate a fraction to crank the Panigale V4S to the right. I still can pull my line inside but I get on the gas too early, running wide on the exit. I blast down the short chute to the right/left then quickly shift into fourth. With my knee planted I reach over 200 km/h; the acceleration is fierce but I can easily hold my line and concentrate on the braking marker that will appear in that blind corner. Still at a decent lean angle I brake hard relying on the power and great feel of the Stylema Brembo brakes. Two stabs on the DQS shifter, the electronic downshifts keeping the bike perfectly stable, then I try to keep up with the tach that flashes as it reaches 14,000 rpm. Third, fourth, fifth, I see 288 km/h on the speedo before my attention is urgently drawn to finding another oh-so-important braking point.

I’m not riding very well, far from it, but I don’t care all that much. I’m just having so much fun on what I believe is the fastest production bike available, never mind that I’m all over the track. The Panigale V4S lets me enjoy without trying to hurt me.

Being off-form lets me discover what is the biggest surprise for me. I expected that the Panigale V4 would be fast and competent at going fast and it does not disappoint; it will be the new reference marker. But usually a clumsy rider on an over-200 hp motorcycle is not a good recipe for a safe, good time on track. Flexible, easy to ride and confidence inspiring (even for normal humans) IS the big news here about the Panigale V4.

The ergonomics are spacious for such a compact motorcycle; colleagues with bigger frames than mine said they fitted fine. In the first sessions I had issue with my boots slipping off the footpegs but I adapted to their smooth surface later. They provide plenty of ground clearance and it is an easy switch to a GP shift pattern if so desired. One gripe I had was with deploying the superb aluminum kickstand; I just couldn’t while on the bike, with my foot.

On track, all the inputs the Panigale V4S is transmitting are clear and reassuring. The chassis feels solid but compliant, never nervous. I can pick a line and readjust it mid-corner like no 1000 cc (or 1100!) should allow. That reverse spinning crank has to be the key here, negating some torque reaction under acceleration to help keep the front wheel down. High speed and braking stability attest to the balance of the whole chassis and suspension, the Stylema brakes have a soft initial bite then provide incredible, easy to modulate whoa power. I love them! The long swingarm and tractable power of the V4 means I can extract a lot of forward drive off the new Pirelli Supercorsa SP out of corners. Those tires have been developed specifically for the Panigale V4. The front is a tad wider and matched to the profile of the tall 200/60-17 rear. The icing on the cake is using that generous grip and rolling the throttle on all the way. The V4 just pulls me forward with gusto like I’ve never experienced before, all the while staying civilized, thanks to a smooth powerband and some well-behaved electronics.

A good pasta lunch break proved beneficial to my energy and concentration levels. With a more precise rider at its control, the exploration of the limits gets easier with each additional lap. The easy nature of the Panigale V4 doesn’t wear me out as bad as my lack of physical fitness might otherwise cause. It is by turning down the traction, slide and wheelie controls that I realise how much they were working earlier; their intervention is that transparent.

One session on the accessorized Panigale V4S, shod with SC1 slicks and with the Akrapovic titanium exhaust, and I realise how small the Valencia circuit must appear from a MotoGP saddle. With seven kilos less and 12 hp more, the V4 requires more finesse and feels much racier. The exhaust note also lets me know there is fury and speed being generated. The chassis happily deals with the extra power and grip. The electronic aids, DTC, DWC and DSC, are reprogrammed when the mapping derestricting the Euro4 motor for track-only use is flashed to the ECU. The power difference is that significant. I have never before ridden a bike this powerful and this fast.

The Panigale V4 signifies a page being turned in Ducati history. The first chapter will be about an extremely fast motorcycle, one that redefines the superbike class but also lets its rider go fast and feel like a hero, no matter if he’s super talented or just an ordinary human.

Inside the Desmosedici Stradale V4
Developed over four years, the V4 Stradale adopts many traits from the MotoGP engine. The V angle is 90º and it is rotated back 42º. The crankshaft rotates in the opposite direction to the wheels, to negate gyroscopic forces, and it offsets its crankpins by 70º to give that twin-pulse firing order, all MotoGP trickery. Visualise two V-twins joined together, the left one firing its cylinders 90º apart, like any Ducati, the right side following 200º later. At idle and up to about 7,000 rpm the traditional Ducati signature is easy to hear in the exhaust note. Higher in the rev range it sounds like, well, the MotoGP engine it is derived from.

Fifty-two mm throttle bodies with variable velocity stacks feed the 81 mm pistons (same bore as the MotoGP) that compress the mixture at a serious 14:1. With the 53.5 mm stroke chosen for good torque and less peaky power, the displacement is 1103 cc. Not legal for superbike racing, of course. A 1000 cc version is under development to be Ducati’s World Superbike weapon in 2019.

Chassis and suspension
The aluminum frame, or Front Frame as Ducati says, is an evolution of the original Panigale monocoque chassis. It mimics half a regular twin spar frame with arms cradling the front of the V4 and the rear attaching to the back cylinder head. The Panigale V4 felt compliant on the Valencia circuit, not overly stiff or sensitive. The subframe is also in cast aluminum and joins the rear of the frame for a continuous connection. It supports the aluminum tank that goes under the pilot seat, MotoGP style.

The Panigale V4S ($31,195) and the exclusive Panigale V4 Speciale ($47,995) get the Öhlins Smart EC 2.0 NIX30 fork and TTX36 shock that work in conjunction with the Bosch 6-axis IMU. Cast Marchesini wheels and a lithium battery drop the weight by three kg from the base model.

Electronics
The electronics of the Panigale V4 take the Superleggera package a step further with an interface that is much friendlier.

There is a long list of systems (that can all be adjusted to suit you and of course each riding mode has a base setup for all this):
Riding Modes, Power Modes, Bosch Cornering ABS EVO, Ducati Traction Control (DTC) EVO, Ducati Wheelie Control (DWC) EVO, Ducati Slide Control (DSC), Engine Brake Control (EBC) EVO, Ducati Power Launch (DPL), Ducati Quick Shift (DQS) up/down EVO and the Ducati Electronic Suspension (DES) EVO on the S and Speciale versions.

The access to the parameters is through the superb five inch high-definition TFT dash screen and two switches on the left handlebar. On the dash a round bar-graph tachometer is easy to read with the color of the rpm display going from white to yellow and then flashing as the 14,500 rpm limit approaches, doubling as a shift light. The gear position indicator is in the centre of the tach and all the electronic parameters are displayed in the lower right corner. Track or road mode switches the emphasis between lap times and speed display.

The Ölhins Smart EC 2.0 suspension of the S and Speciale introduce a new way to tune with an event-based approach. The parts of a corner are broken down into braking, mid-corner and acceleration. Adding more braking support won’t affect the other parts, the Bosch IMU and the Smart EC 2.0 software keeping track of what the motorcycle is doing and adjusting at a rate of up to 100 times a second.

As complicated as the electronics package sounds, in operation it is simple and intuitive, helping the rider in a friendly and immediate manner to operation the Ducati precisely, safely, and as quickly as desired.