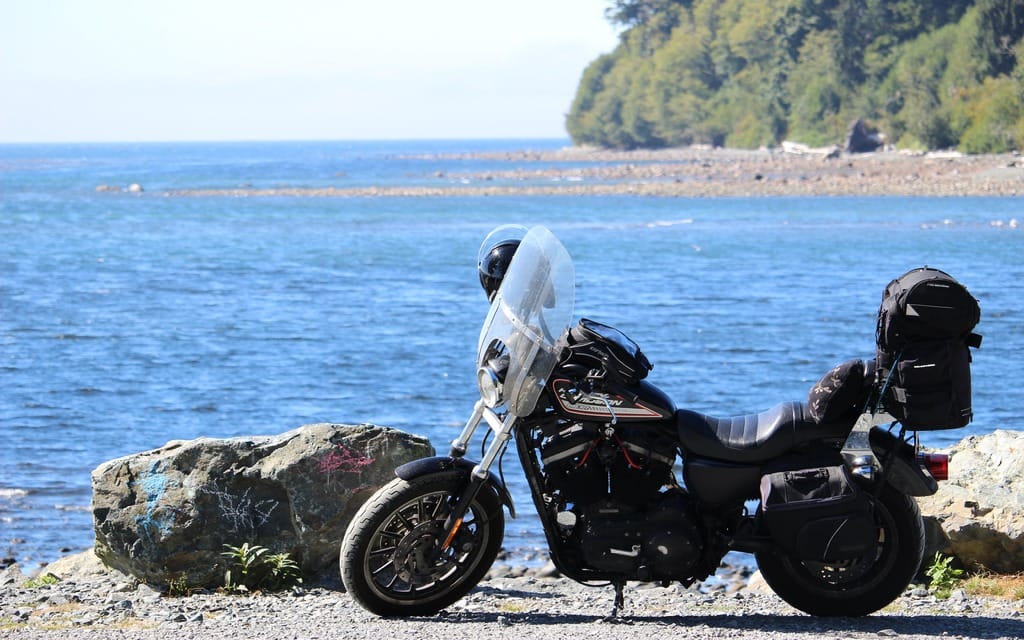 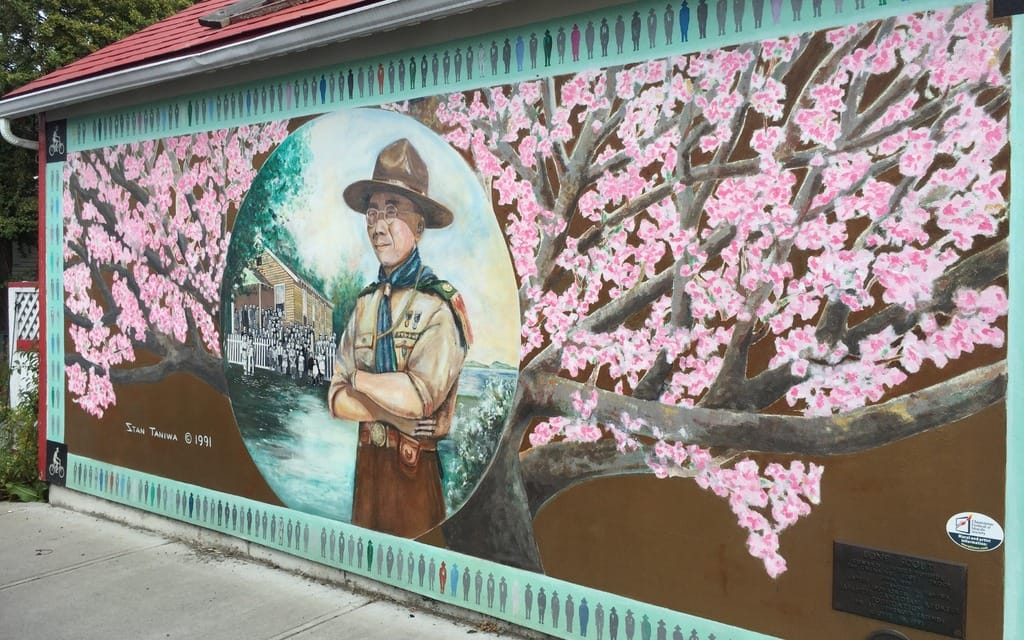 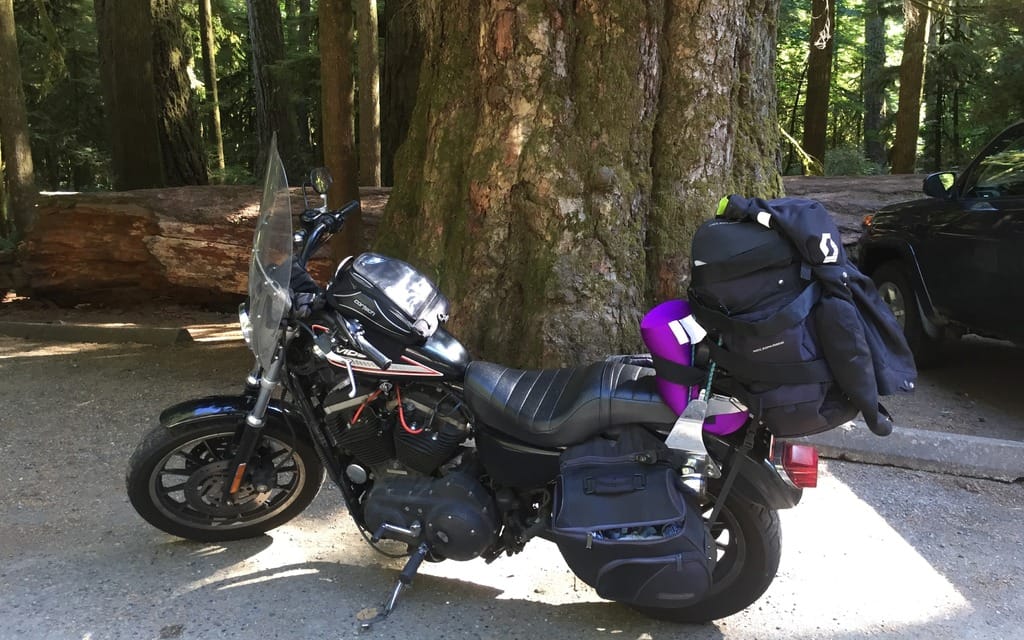 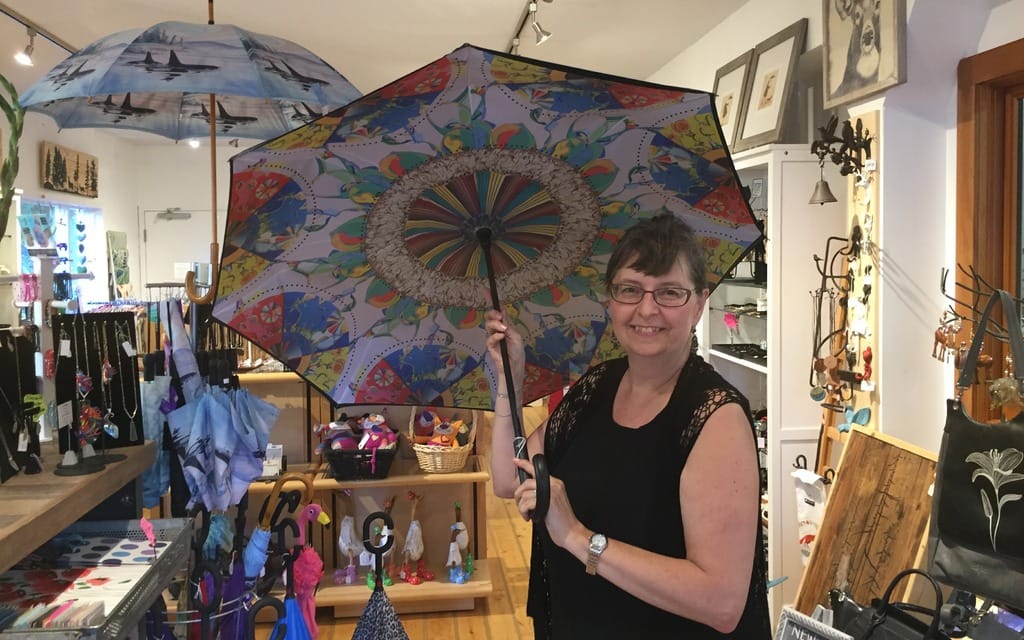 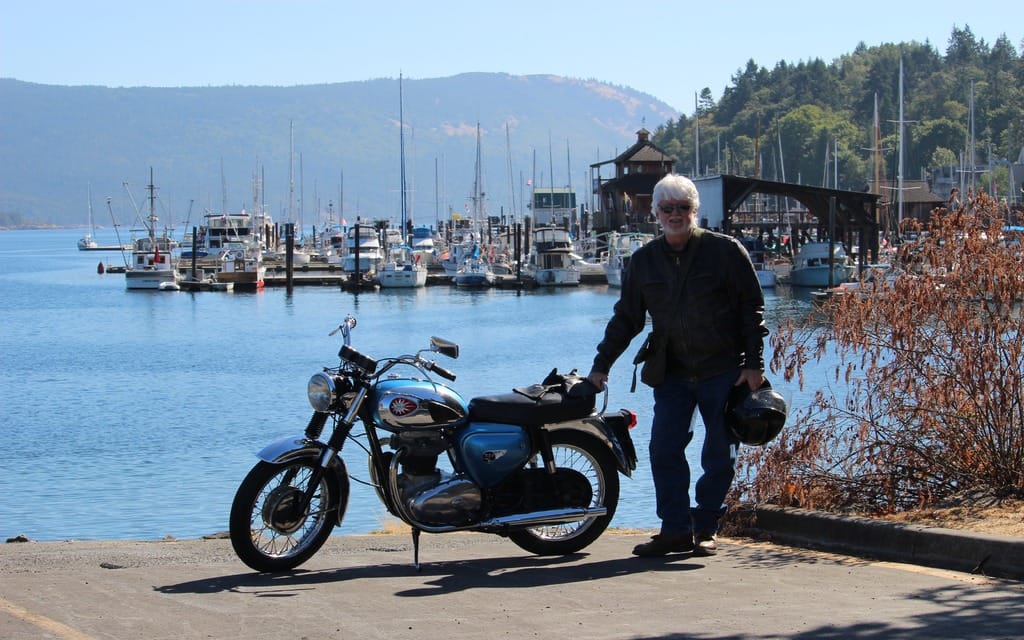 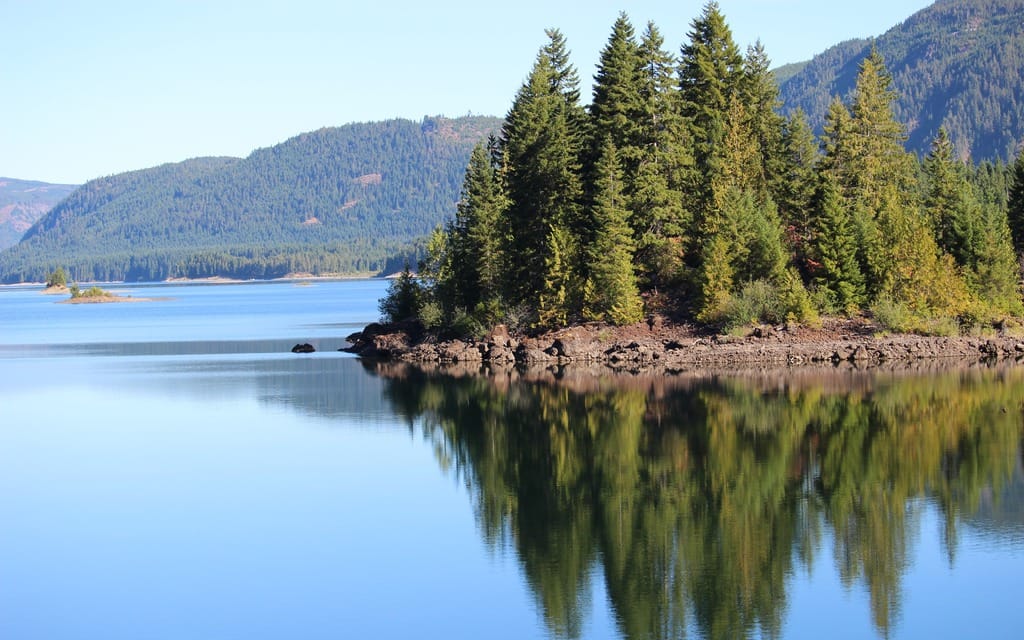 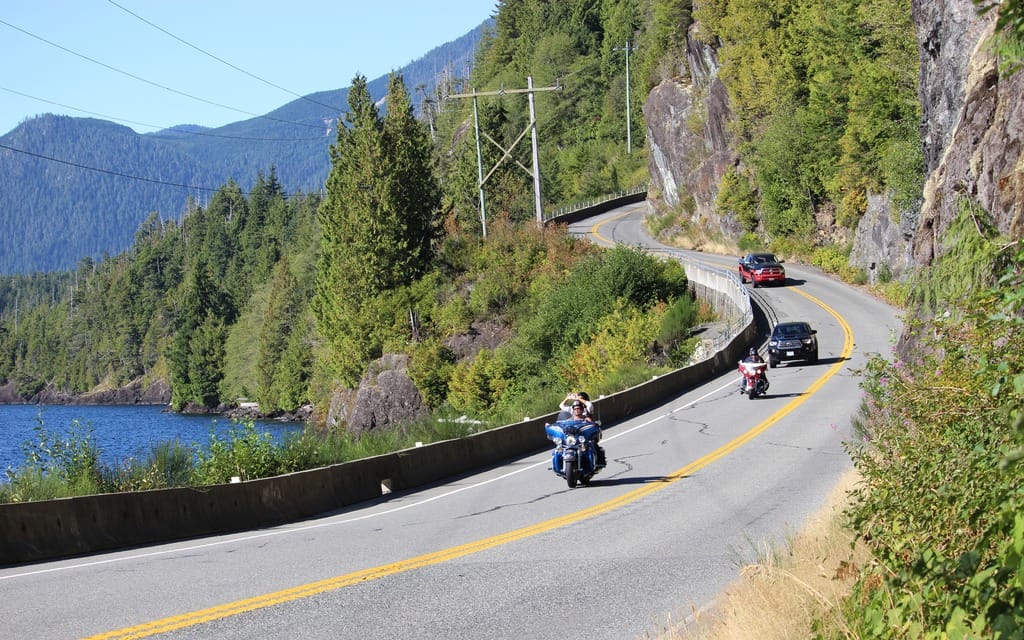 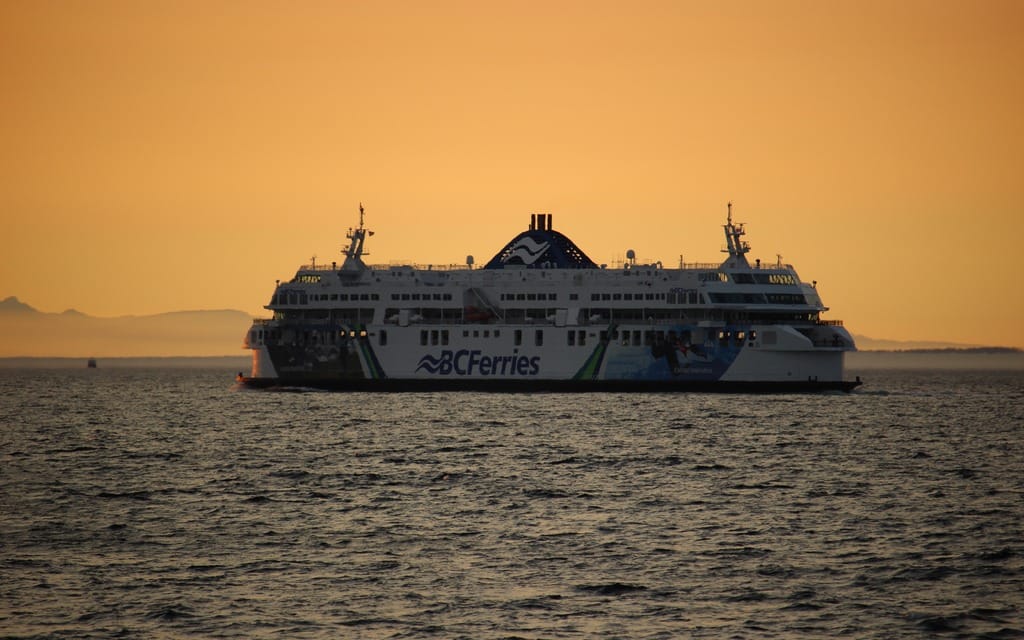 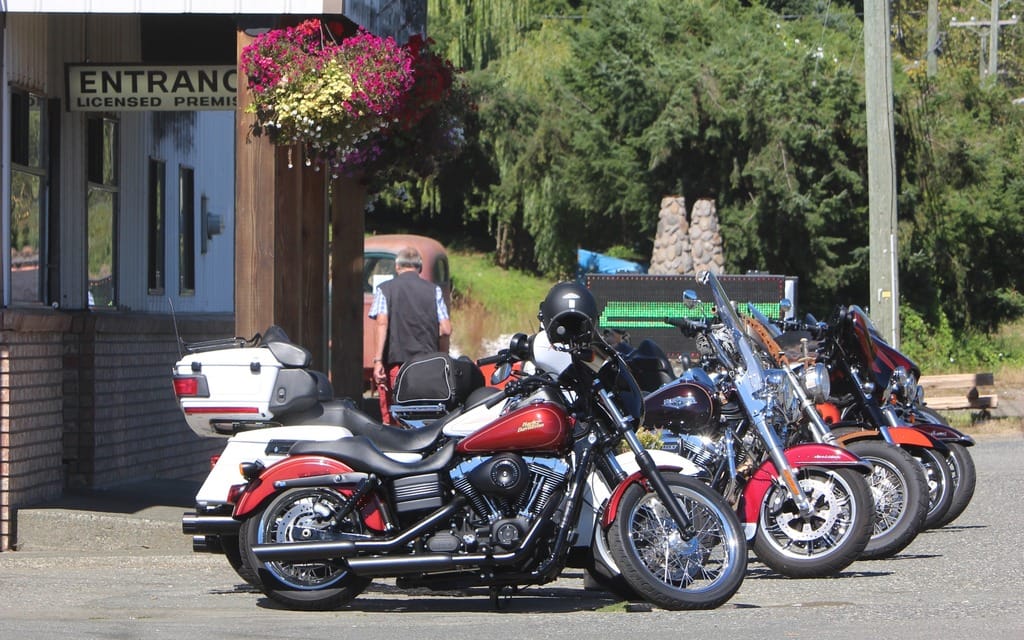 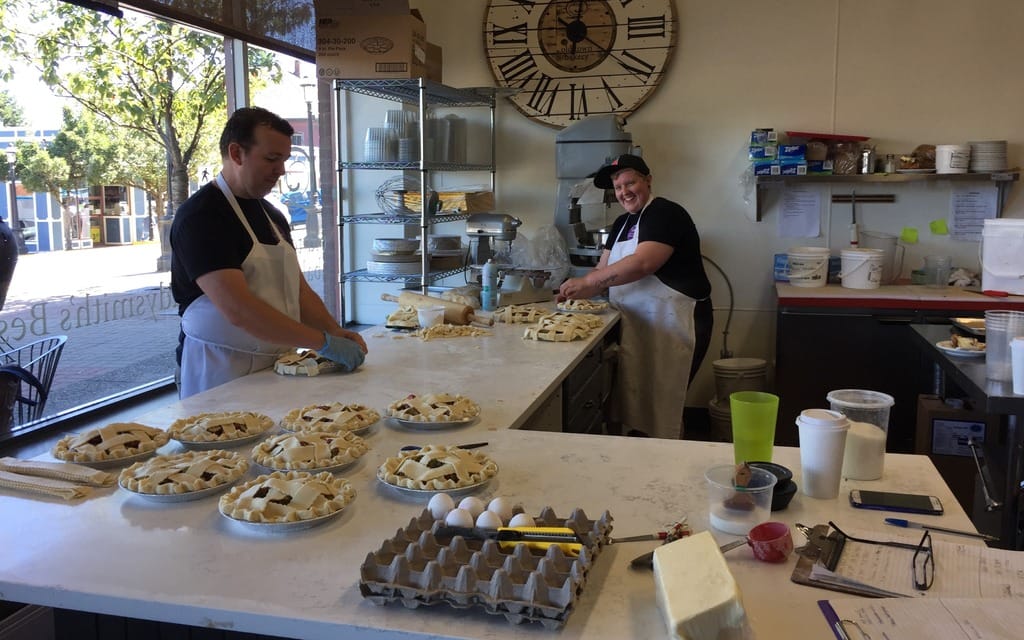 Curves, clearcuts, and coastal views beside the Pacific ocean
Story and photos by Larry Pynn
You may fall in love with Vancouver Island even before you get there. That’s because of a BC Ferries policy giving motorcyclists priority — first on, no reservations, and, if you don’t arrive too late, chances are they’ll find a way to squeeze you into the stern section while car drivers just sit and pout.

The 30-nautical-mile sailing across the Strait of Georgia from postcard-perfect Horseshoe Bay, northwest of Vancouver, to Departure Bay, in Nanaimo, takes one hour and 40 minutes. It might also take you back a few decades.

The pace of life is slower on Vancouver Island, an area 5.5 times the size of Prince Edward Island, with one-third the population of Metro Vancouver.

Less traffic. Slower traffic. Still, it’s a wonderfully smug feeling to be first off the ferry and on to your destination — in my case, a 1,600-kilometre, six-day journey across the length and breadth of the island on my 2005 883 cc Harley Sportster.

The only problem today is the rain. Despite this summer being one of the hottest and driest on record in southwestern British Columbia, an unexpected cloud burst opens just before the unloading ramp is lowered to the vehicle deck.

The rain is too isolated to bother with putting on and taking off raingear, so I suck up the wet jeans and head south on Highway 1 to Ladysmith on the oceanfront. A woman running the thrift shop complains that the weather office never predicted this: “I have $4,000 worth of hay on the ground.”

Brighter skies across the street on First Avenue at the legendary Old Town Bakery, where it’s worth enduring the inevitable lineups for amazing soups, sandwiches, pies and sweet baked goods.

Continuing south, I abandon the main highway for quieter country routes wending in and out of the waterfront: Chemainus Road, which leads to the community of the same name, known for its colourful, historically themed murals; Crofton Road, ending at the less-attractive Catalyst pulp and paper mill; and Herd Road to Maple Bay before returning to Highway 1 just north of Duncan.

There I ride west on Highway 18 to the town of Lake Cowichan, at the eastern end of Cowichan Lake — yes, the words are reversed. Once a bustling forestry town, the community has seen better economic times. One empty storefront after another lines the main street. The “scooters only” parking sign out front of the Country Grocer also catches my eye. Owner Jo-Anne Pimlott emphasizes it’s not for Vespa-loving lumberjacks. “It’s for disability scooters. Most people would bring them into the building, but we have a few who like to park it, and then walk in to get their groceries.”

The best bet for dinner is Jake’s At The Lake pub, featuring a waterfront view and $10 burger-and-craft-beer special.

My nearby destination tonight is Youbou, a small community on the north side of the lake where the TimberWest mill closed in 2001. Its current claim to fame is a 1950s four-lane bowling alley that still employs pin boys. Family nights on Fridays, adults on Saturdays, and special bookings available.

Judging by the road signs, it’s also a good place to see Roosevelt elk, the largest of its kind in North America. “You might even see one from your back window,” says Teresa Gustafson, who moved here from the Vancouver suburb of New Westminster a few months ago. She and partner Jerry Eberts have carved out a bed-and-breakfast operation, Dogswood, from a floating home once used in the logging industry and since moved onto land. The place is quirky, clean, and affordable accommodation in which the door opens into the bathroom. The breakfast is delicious, though the view of the lake comes with unsavoury clearcuts.

Returning to Lake Cowichan, I launch into the Pacific Marine Circle Route, which has benefited from a recent paving job that improved access to the west coast of Vancouver Island.

The journey is far from perfect: gruesome clearcuts, uneven asphalt, and an absence of gas stations, shoulders and centre lines. I round one corner and encounter a Can-Am Spyder approaching fast in my lane. The rider swerves back, then actually does “the wave.”

The route extends about 60 kilometres to Port Renfrew — a surfing and fishing community, southern access point to the iconic West Coast Trail, and home to Avatar Grove, a patch of old-growth rainforest. Even if just passing through, don’t miss the fabulous comfort food at Coastal Kitchen Café, an obvious hub in the community.

I continue southeast on Highway 14 with its frequent hairpin turns leading through forest and fog alongside Juan de Fuca Marine Trail. I stop to enjoy the sparkling vistas at Jordan River, and fetch up at civilization again in the District of Sooke.

At Langford I slingshot back onto Highway 1, but decide to forgo the urbanity of the provincial capital of Victoria in favour of roads less travelled. Good luck with that. The evening rush-hour traffic crawls north of the city through leafy Goldstream Provincial Park and the Malahat Drive, with views below of Saanich Inlet. Solace is found further along in the Cowichan Valley, with its meandering country roads and seemingly endless rural stops of interests, be they wineries or the likes of Fat Chili Farm, with more than 40 varieties of chili peppers.

Cobble Hill is worth a special visit, for the unique gift shop, Two Hoots, with on-site potter; Cobblestone Pub; and live music Thursday nights in the park in summer.

The next day I visit nearby Cowichan Bay, a tourist destination with its floating homes and oceanfront shops and restaurants. I have coffee and breakfast at old-world-inspired True Grain Bread, and bump into a local resident, Jim Ayearst riding a classic 1964 BSA Thunderbolt 650. He remarks that the Cowichan Valley backroads are perfectly suited to slower speeds on the bike. “This thing is really nice for burbling around here. It feels great and it gets my mind focused.” He adds of the bike: “You don’t really own it, you’re just the caretaker.”

Continuing north, I inch my way through Duncan’s traffic congestion before passing Nanaimo and connecting briefly with the Inland Island Highway — a soul-sucking, but efficient, route, with four divided lanes and speed limits of 110 km/h to Campbell River on the central east coast.

At Parksville, I head west on Highway 4 to Tofino, a major tourist destination with sweeping beaches and hypnotic crashing surf. The picturesque route hugs the south side of Cameron Lake and travels through Cathedral Grove with its old-growth Douglas fir trees before reaching Port Alberni — the hotspot of Vancouver Island, with temperatures soaring into the mid-30s this day.

The town, voted Canada’s most biker friendly community in 2016, hosts the island’s largest motorcycle event on Vancouver Island, with some 1,300 bikes gathering for a weekend of toy-run festivities each September. I find the chair of the event, local radio station manager David Wiwchar, attending a salmon bbq on the downtown waterfront. “The thing that makes the Port Alberni Toy Run different is the overwhelming community support,” says the owner of a 2007 Harley Road King. “People line the entire parade route to cheer the riders and hold up signs of thanks.”

I continue riding west, crossing the salmon-rich Somass River and stealing peak-a-boo views of Sproat Lake, home to the famous Mars “flying tankers” used to fight wildfires. The road to Tofino gets busy in summer, and deteriorates the farther you go, with narrow twisting curves that eventually lead down the Kennedy Cliffs to Kennedy Lake, which is easily be mistaken for the ocean.

A short ride later lies an important T-intersection: right to Tofino or left to its less-popular cousin, Ucluelet. I aim for Tofino — Tuff City to locals — and enjoy a much-better road thanks to federal funding of Pacific Rim National Park Reserve. The route is lined with surf shops and passes iconic stretches of shoreline, including Long Beach and Wickaninnish Beach. Unfortunately, the only accommodation in town is a frumpy shoe-box room at Maquinna Hotel downtown for a shocking $145 plus tax. On the dock across the street, $5 buys you a water-taxi ride to Opitsaht on Meares Island, site of an early aboriginal land-claim dispute in the 1980s and described as the oldest continuously occupied village in B.C.

I walk past gift shops and ecotourism operations and wind up at Tofino Resort and Marina, under new ownership, including former National Hockey League star defenceman Willie Mitchell of Port McNeill. Dinner includes an amazing whole rockfish on an outdoor patio warmed by vertical propane flames. As a bonus, Mitchell is at the restaurant this night to offer guests a handshake and big personable smile.

In the morning, I walk over to Tuff Beans for coffee, then ride to Black Rock Oceanfront Resort in Ucluelet for the breakfast buffet. The facility is set into the rocky, exposed shoreline, making for a patio-dining experience so dramatic that you could reasonably expect to see a sea otter cracking a shellfish on its belly or feel the blow spray of a humpback whale.

Far too soon, it’s time to backtrack to Parksville and head north on coastal two-lane Highway 19A through the retirement community of Qualicum Beach with its sandy shoreline and sunny clime, and an oyster lunch at Fanny Bay Inn. Next to my table, a Harley rider is on an apparent first date, having just picked up his lady friend. “So, was that ‘your’ pitbull?” he asks. “No, my daughter’s,” she responds. “Do you have a dog?”

Continuing north, I pass the Highwayman Saloon at Union Bay with a long row of bikes out front, and on to Royston, known for its unique breakwater of historic sailing, steam, and military ships, some dating back to the 1800s.

Ahead lies the book-end communities of Comox and Courtenay, and a short side-trip to Cumberland, a one-time coal-mining town now offering cappuccinos and craft beers.

I overnight up the road at Campbell River, where sport fishermen in row boats can be observed just offshore reeling in minimum 30-pound chinook salmon to secure membership in the exclusive Tyee Club.

The next morning, I take a quick trip down Highway 28 leading to Gold River, on the west coast. The route offers the best twisties to date, terrific mountain scenery, and Strathcona Provincial Park. The motorcycle guide book, Destination Highways B.C., accurately states that “this polished gem is the best ride on Vancouver Island.”

Back at Campbell River, I surge north on Highway 19, the two-lane North Island Highway, an uninspiring straight-forward ride through logging country with little traffic. One expects a black bear or deer to emerge from the bush pressed tight to the roadside, but, thankfully, I encounter neither.
Instead, I pass the gas stops of Sayward and Woss in declining weather. By the time I reach the turnoff to Telegraph Cove, a magnet for kayaking and killer-whale watching, the weather is cool, foggy and drizzling. It’s hard to believe I am only hours from the searing heat of Port Alberni, a reflection of the sheer size of Vancouver Island and the variety of weather systems it encompasses.

I overnight in Port McNeill, gateway to aboriginal experiences at Alert Bay on Cormorant Island and the commercial fishing community of Sointula on Malcolm Island. It’s also a short hop to Port Hardy, terminus of Highway 19 and boarding point for ferries to Prince Rupert and Bella Coola — two potential circle routes for riders with the time and inclination.

Tomorrow, I reluctantly head home, confident I have seen much during my travels, but knowing there is ever more to be explored on Canada’s largest and most diverse Pacific isle.