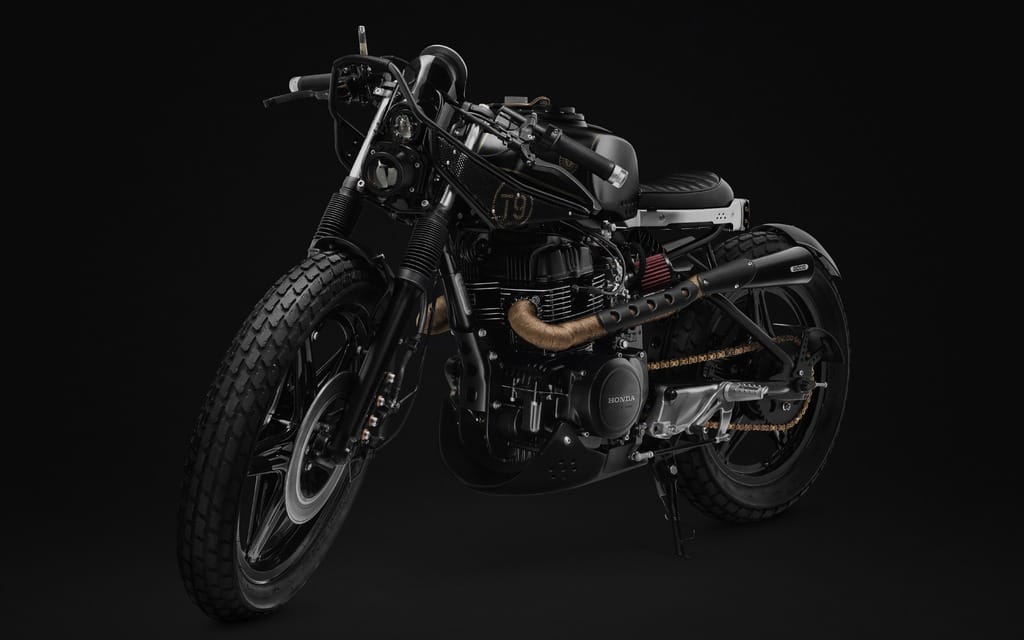 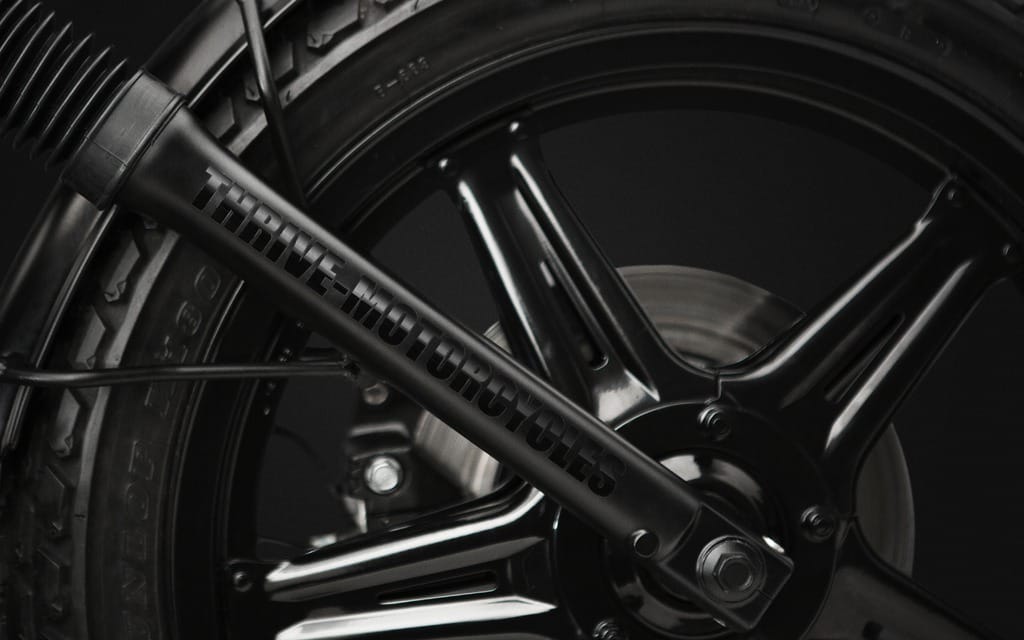 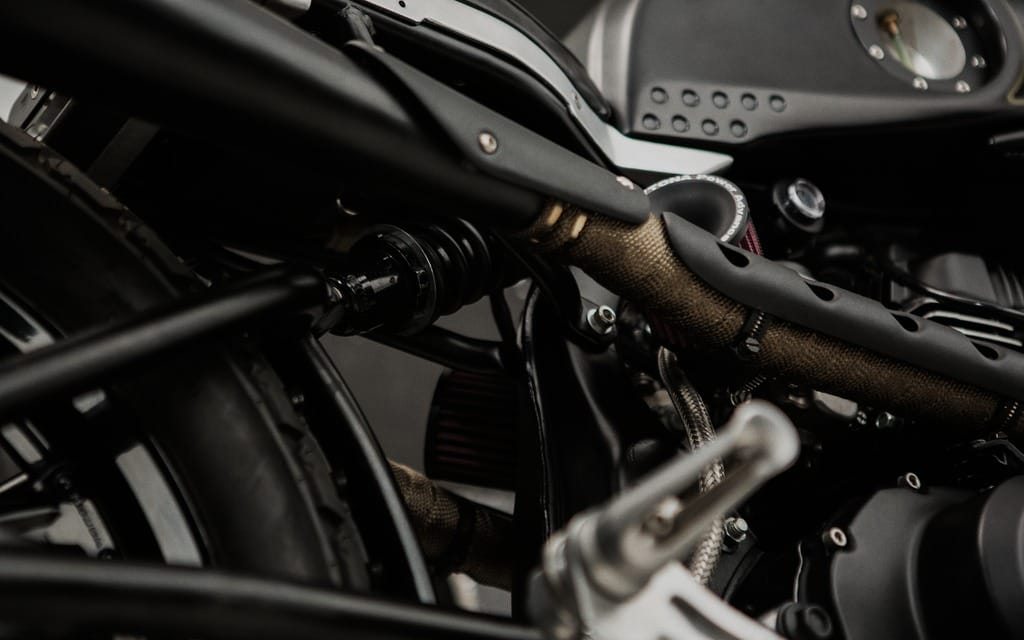 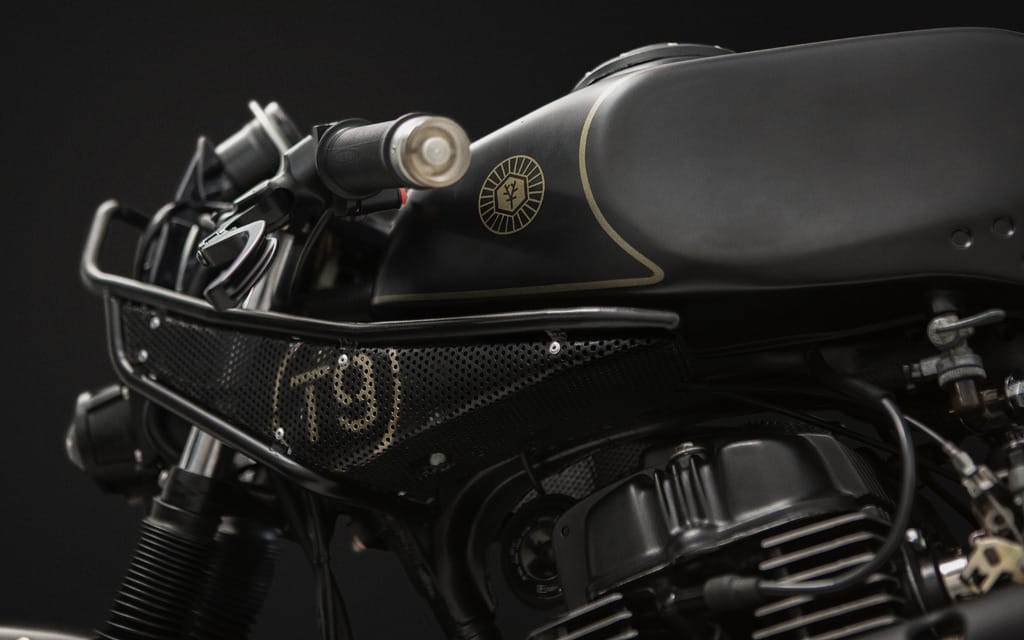 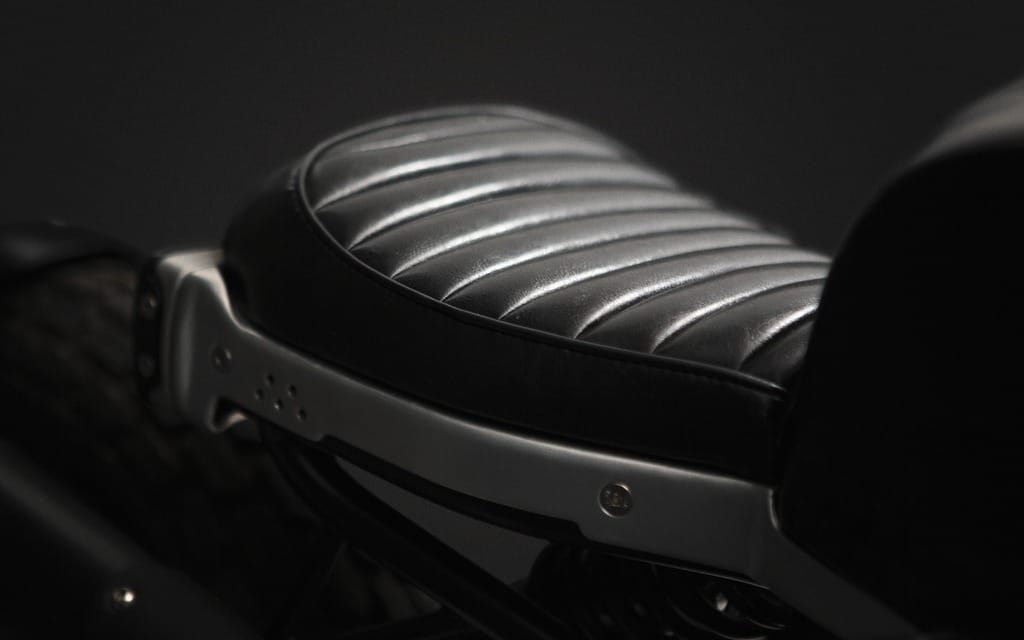 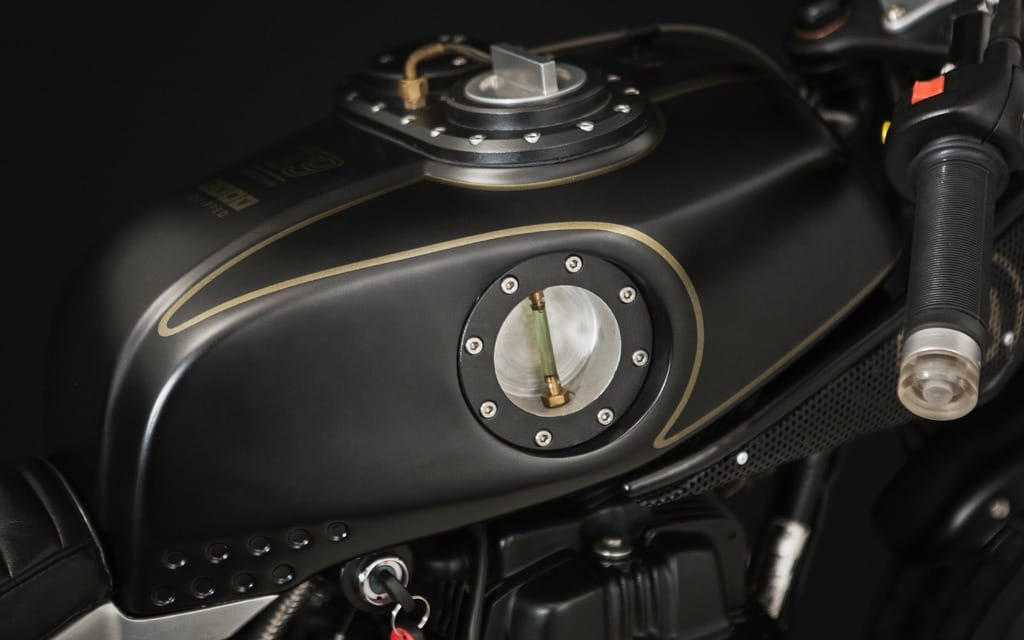 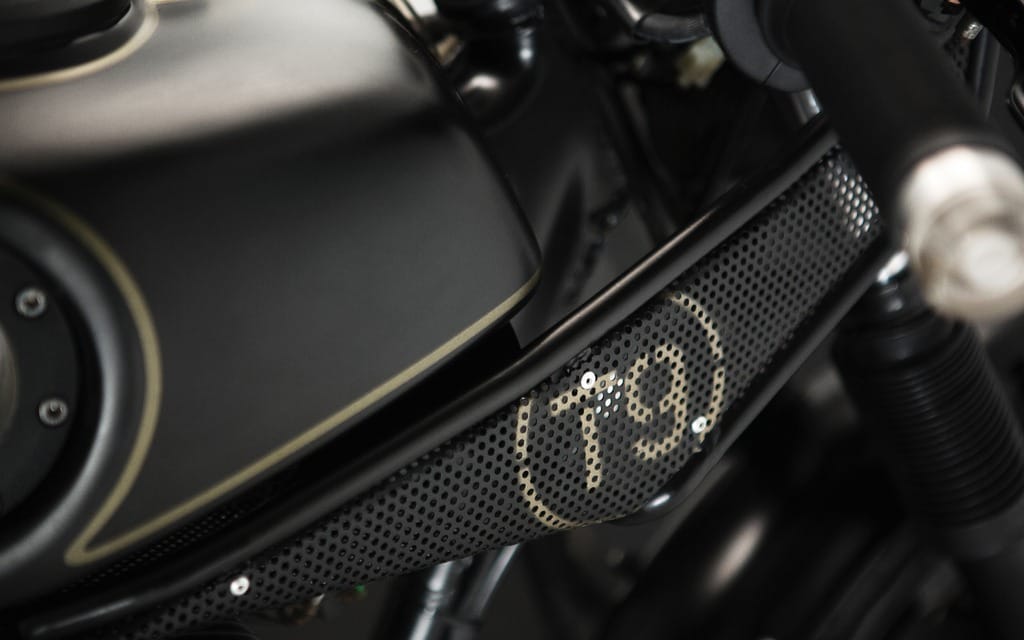 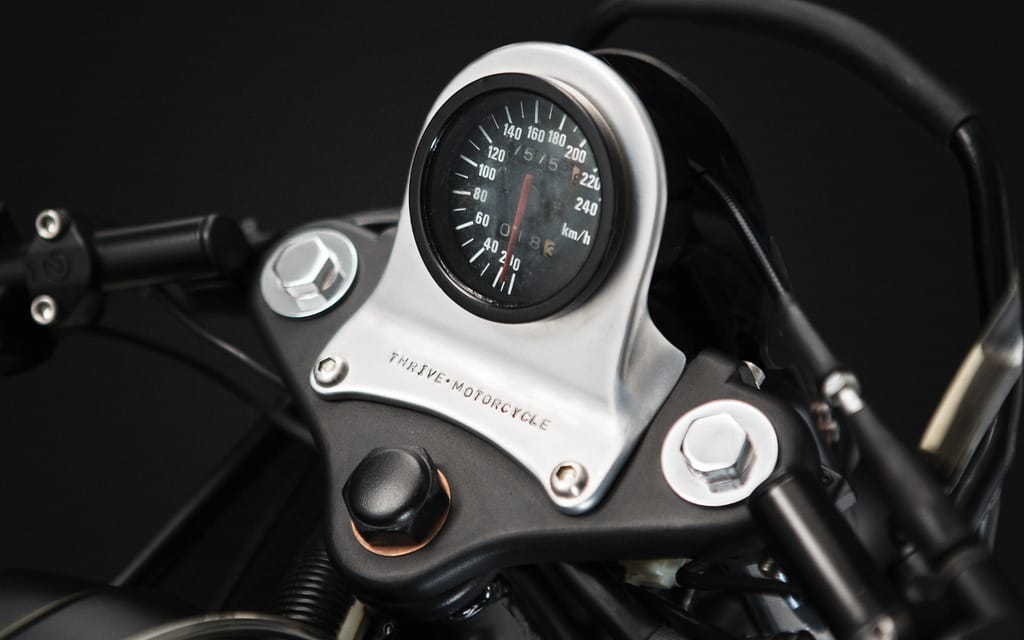 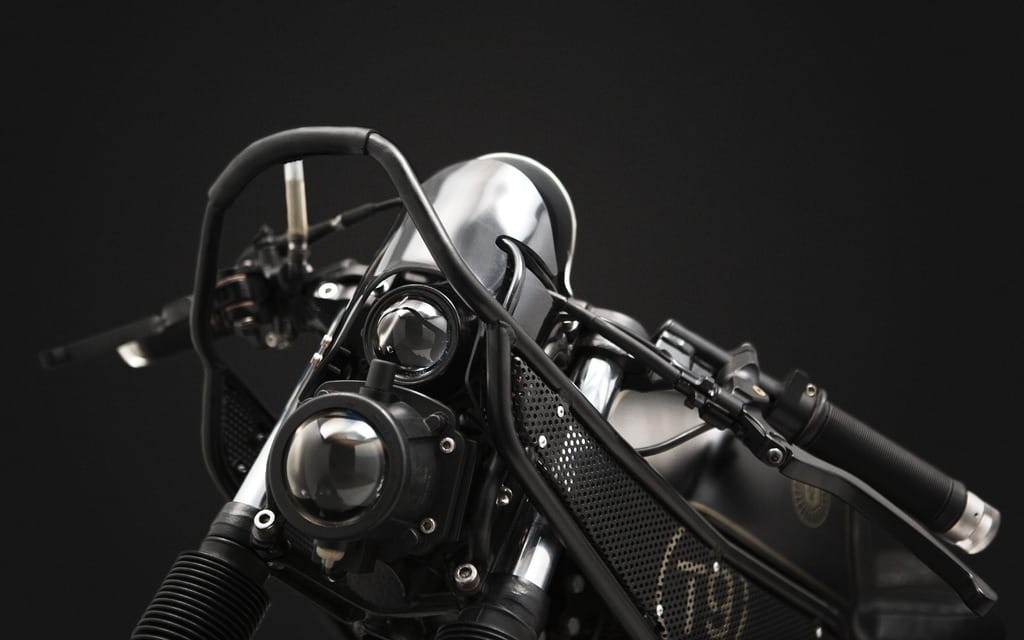 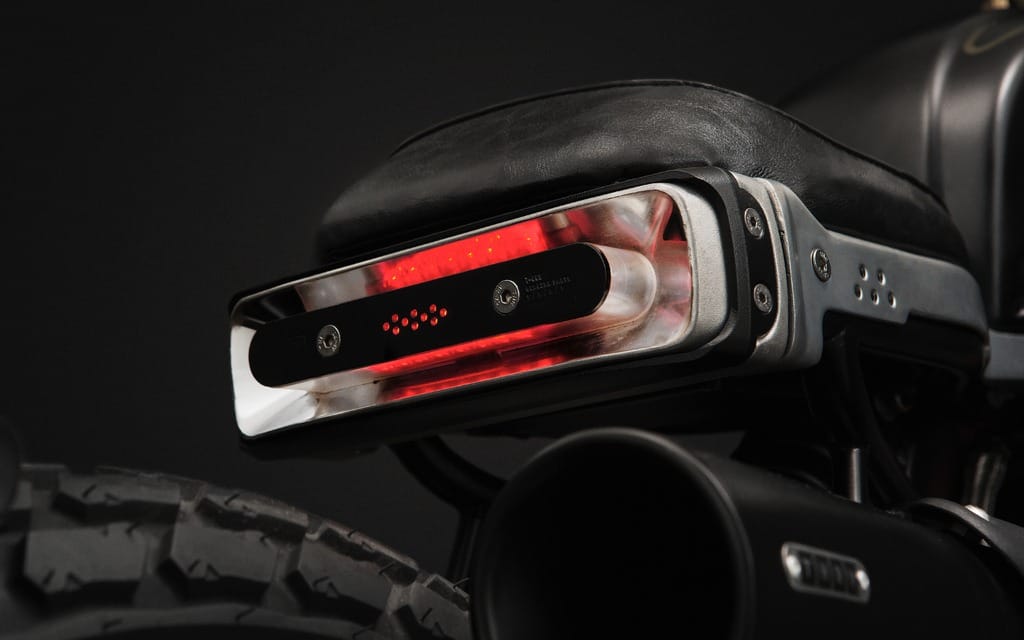 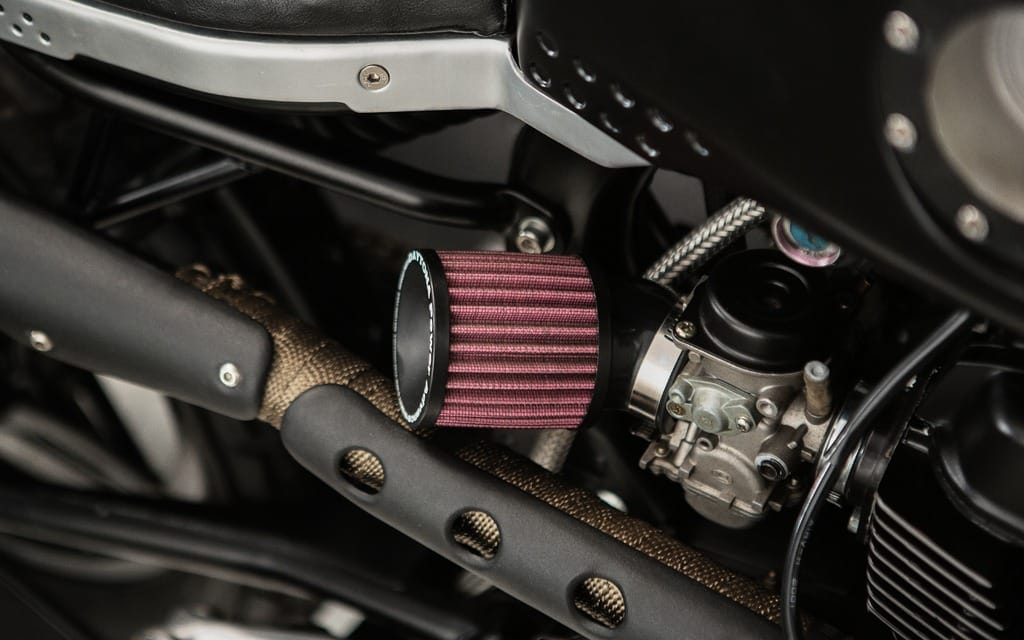 In the world of custom motorcycles, appreciating the skill required to achieve an incredible result can be a difficult thing to gauge. But one thing is for sure, nothing informs a builder of just how hard a certain model is to work on until they take one and get their hands dirty, skin their knuckles and often are left cursing aloud at the night’s moon. The Honda CB250N was a great commuter bike of the early ’80s but rarely does anyone build a good custom from one; I spent a year trying and it wasn’t pretty. So I bow down and worship at the feet of T9 Prototype by Thrive Motorcycles, an incredible 1984 Honda CB250N that just might be the best I’ve ever seen.

The Indonesian company headed by Indra Pratama and Barata Dwiputra has been turning out impossibly cool machines from largely commuter based models for a few years now. But in the middle of 2015 they were catching up with an old college friend over a few beers who turns out to have gone on to have great success of his own as one of the country’s leading tattoo artists. Mulie Addlecoat of Thinking Tree Tattoo was telling the lads about his love for the Sci-Fi movie “District 9” and how he dreamed of owning a custom bike that wouldn’t look out of place in the successful flick.

Indra knew where this conversation was headed and after the meeting an exchange of emails and visits to each other’s shop took place and the idea was set to become a reality. Plenty of research was required as such an extensive project had to be done right and would also serve as the test bed for Thrive to develop a range of custom parts to be sold under the T/H/R/V name. “But we think that’s the exciting part, since we personally enjoy the movie like he does, and probably a project like this will not happen twice in our real life so we decided to take it further with experimenting with special custom parts for this bike.”

The CB250N was chosen precisely for the reason many avoid it, the unflattering engine shape and rear subframe. Small and reliable, it was perfect for a new rider. With the donor bike up on the lift and heavily stripped down they could begin to envision where the changes had to take place. “The design was pretty much inspired from the D9 weaponry, looks that twisted with our own taste and visions of Post Apocalypse kind of vehicles,” explains Indra. The funky subframe gave the perfect excuse to hack it off and also make the change to a single shock rear.

The new tubular style frame is perfectly integrated into the stock backbone, shortened to expose more of the rear tire. To create a visually cohesive rear end the stock swing-arm was used as the foundation of the new piece to support the monoshock and again tubular steel was chosen. The theme even runs to the rear fender that hovers out over the tire with supports on just one side for easily the most incredible piece of engineering attempted and achieved on a humble 250N. With the heavy fabrication work finished the entire frame was pulled down and all smoothed out and the factory tabs removed for a clean finish.

To really make the bike special the parts that could later be sold by the company couldn’t just be run-of-the-mill and this stretched the overall build time to nearly 18 months. But when you take a look at the sheer brilliance and exceptional craftsmanship of the tail light design that now calls the new subframe home, the wait has been well worth it. The fully integrated light and turn-signal combo is attached to underseat aluminum skirting that can be more easily designed for other models. It’s all topped off with a leather seat, made in-house to match, that also acts as a perfect place to conceal the battery.

With the tail end sorted the less-than-sexy stock Honda tank was next on the chopping block and it’s been completely ditched for one of the coolest custom pieces you’re ever likely to see. The stealthy lines are fashioned from galvanized steel, so even years of Jakarta downpours won’t rust this baby out. But it’s the two new T/H/R/V parts that really take it to a new level, with the gas cap the first piece the team designed. The dry-brake-style filler is straight from the world of motorsport, just that this billet-machined piece puts many multi-million dollar race team operations to shame. The flush-fit fuel indicator is out of this world and the thought of being able to buy one just makes the mouth water.

But the bodywork wasn’t finished there; like with many of Thrive’s builds the T9 features a frontal exoskeleton that further adds to the futuristic feel of the ageing ’80s steed. Perforated steel is used to create the effect over the front quarter with the same tubular bar as the rear used to tie it all together. Having come so far a single headlight would have been a crime and the over-under alien eyeball look is the perfect addition. To maintain the sci-fi inspired lines the hard edges have all been softened with aluminum front and rear fenders, a perfectly sculpted bikini fairing and belly pan all giving that warp speed vibe even when she’s standing still.

The Honda’s colour was something that was carefully considered but in the end all felt there was really only one option. “We chose to cover the bike in black satin finished with the pale gold stripe on certain areas and vapourised over the aluminum parts. And we also put the Thinking Tree’s Logo on left side of the gas tank. The engine was powder coated with the satin black and texture sands.” That engine has been given more than a subtle boost thanks to the gorgeous wrapped and shielded high-rise pipes that finish out each side in Thrive’s own T/H/R/V end cans. A vintage petcock feeds the fuel while turned-out Daytona filters do their best to draw fresh air from beyond the header pipes.

Making the CB250N a pleasure to ride are a set of T/H/R/V Oedipus A rearsets, giving a far superior action to the vague stock units. Up front custom clip-ons get Mulie out of the wind and wear B-Rock grips and soon to be released T/H/R/V bar end indicators. To add a classic touch an old school single speedo was chosen but the mounting plate is all new, hand formed by the guys to bolt seamlessly to the upper triple clamp. A set of Dunlop K180 tires mean you can ride T9 in just about any conditions but in the end they’re just a small piece of the puzzle that now finished reveals the most amazing machine. Movie inspired prototype, sci-fi movie masterpiece, a test bed for incredible parts and creation for a college friend. This is simply the best Honda CB250N I’ve ever seen.