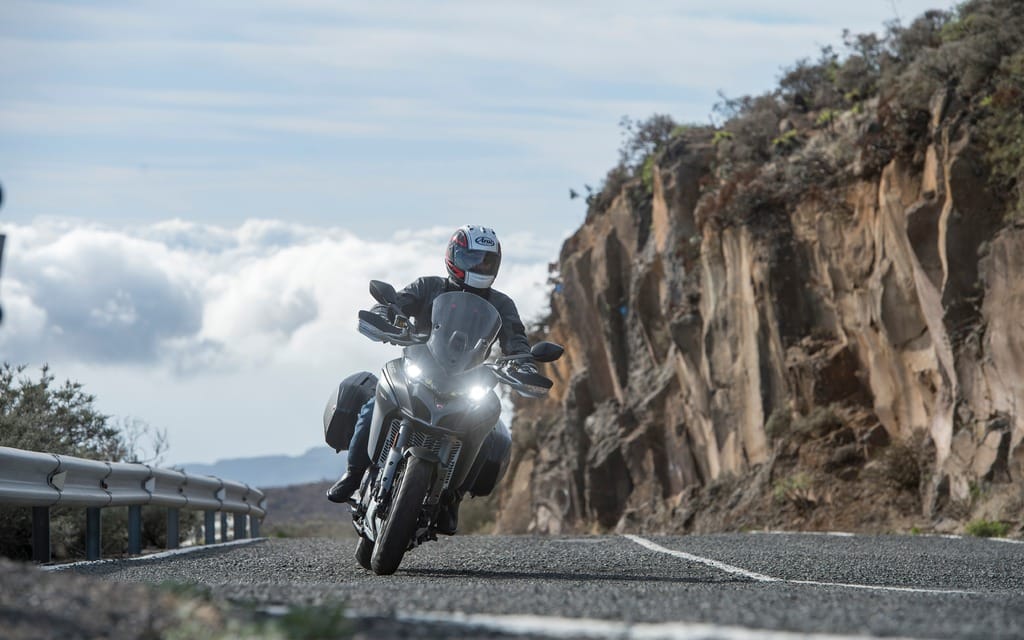 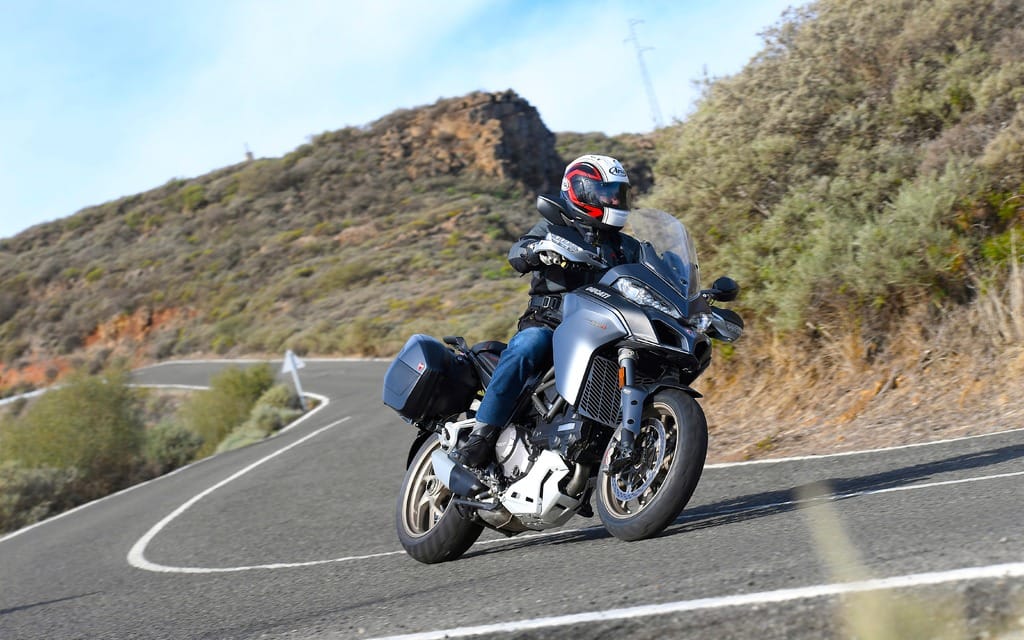 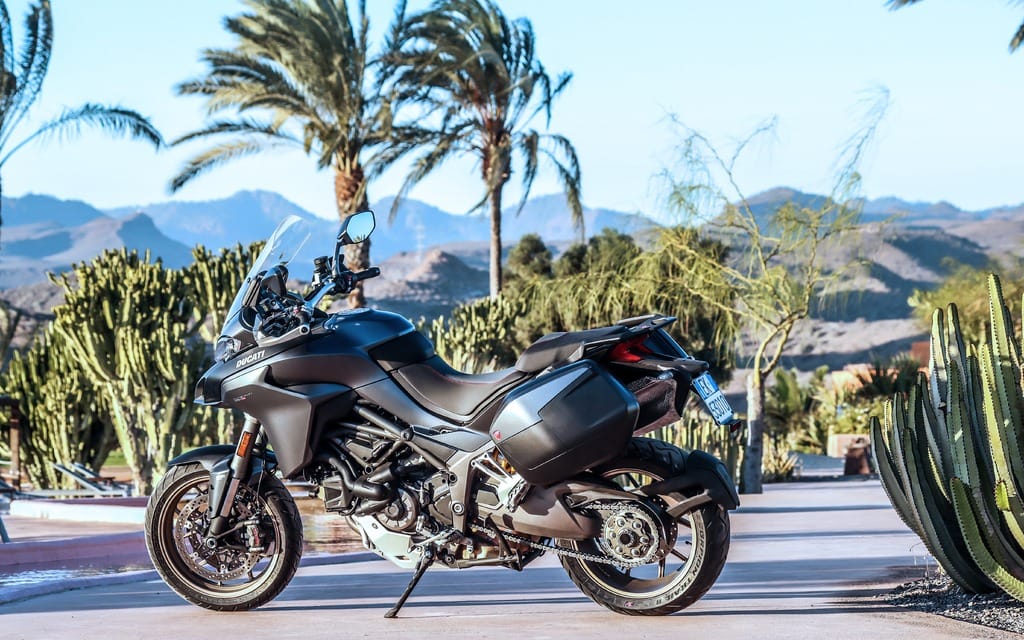 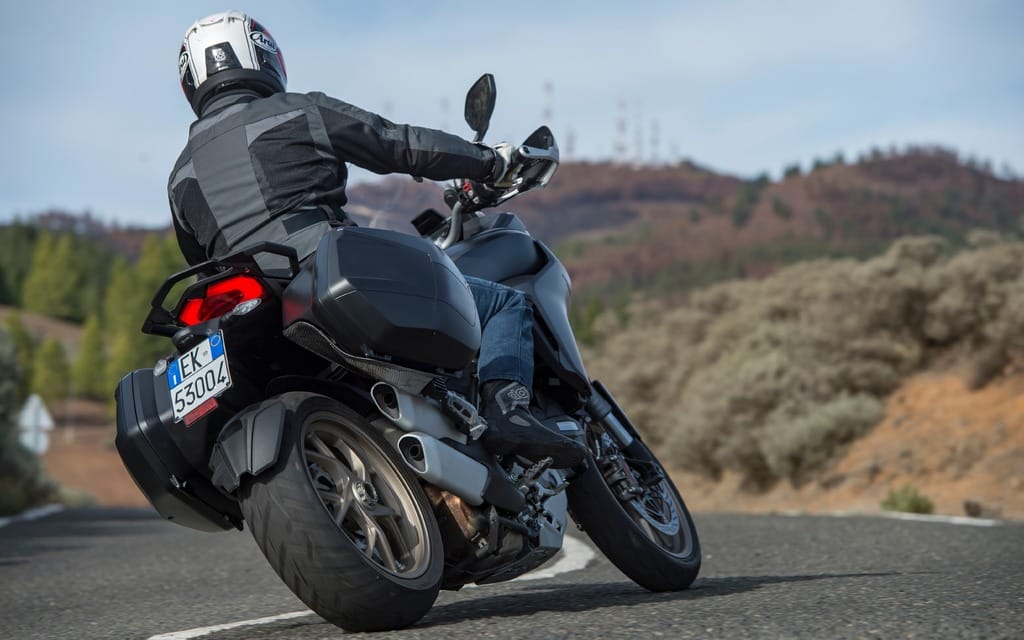 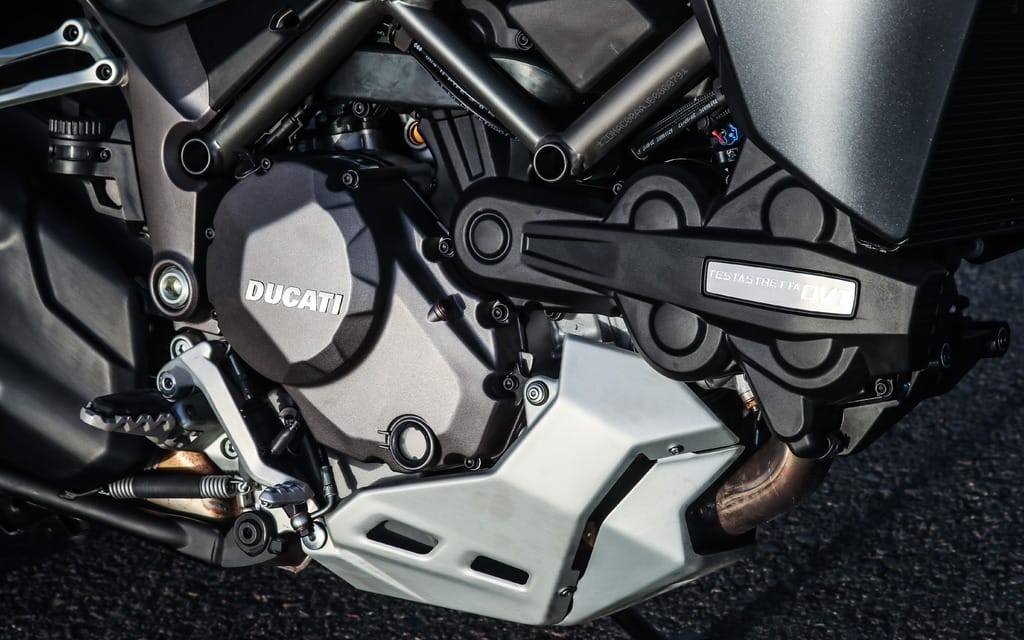 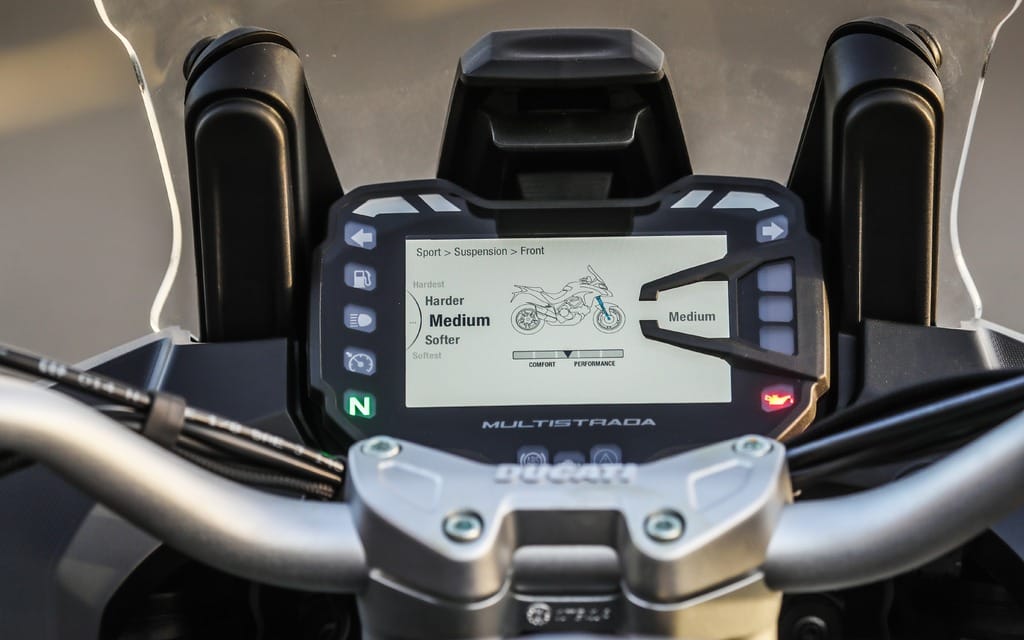 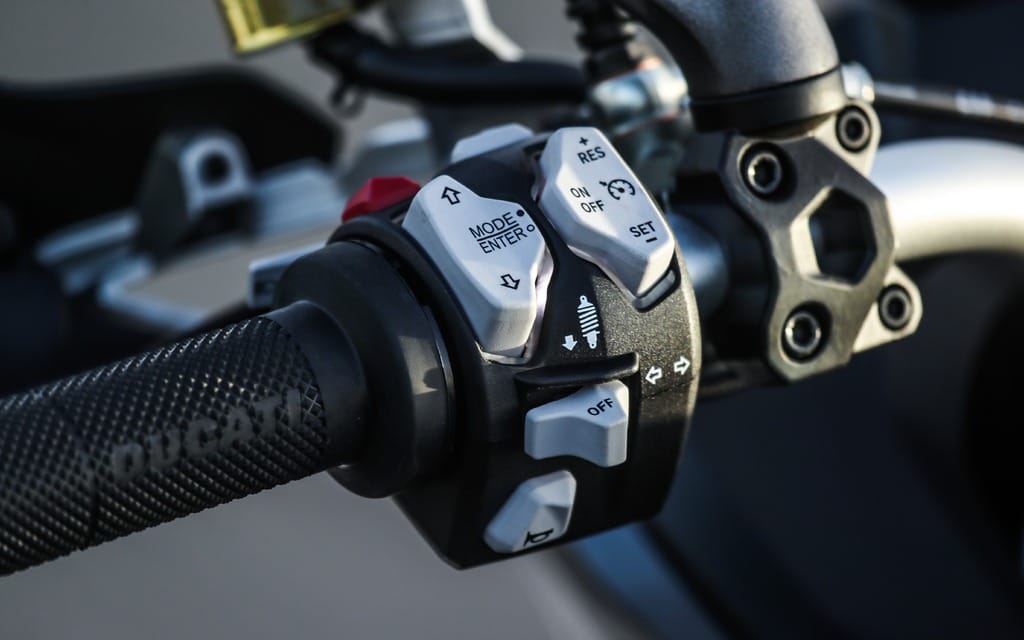 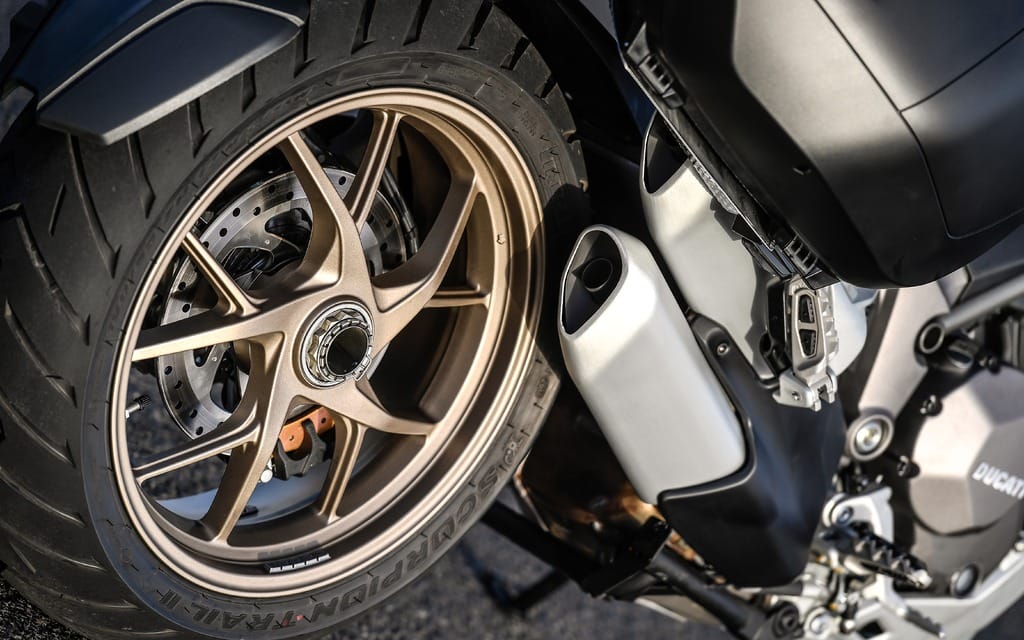 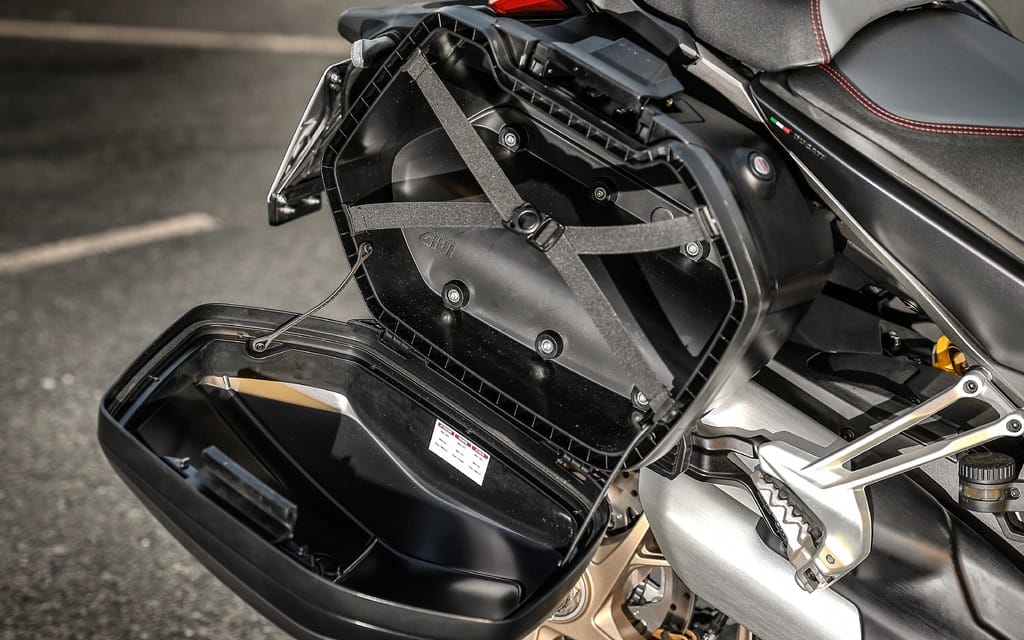 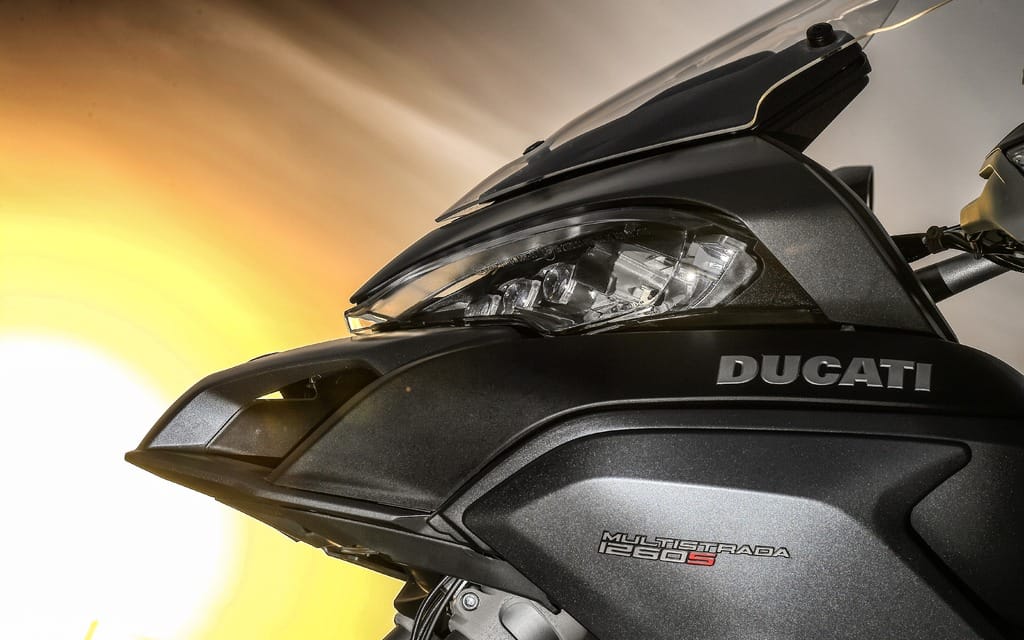 Just a little bigger, but 1260 Multistrada really shows its muscle
Truth be told, 64 cubic centimetres just didn’t seem like much of a reason to fly across the Atlantic. I mean, despite the great foofaraw Ducati is putting on about the “new” 1260 version of its popular Multistrada, we are talking 64 measly cc here. A thimble full of displacement in a motorcycle already blessed with more than enough cubes. By any stretch of journalistic veracity it hardly seemed worthy of an international press junket.

Now don’t get me wrong. Any event that gets me out of the Great White North in December to test a motorcycle on curvy roads (of which there seemed to be an endless supply in the Canary Islands) is a good idea. But, consider that, in ordinary table measure, 64 cubic centimetres is roughly 4.5 tablespoons. Looked at another way, you could, if so inclined, chug an entire 64 cc of the strongest Jamaican rum — it’s only 2.1 ounces — and not trouble even the toughest driving-while-intoxicated prohibition. Hell, 64 cc of lactose-free skim milk wouldn’t even wet the bottom of my morning Cheerios.

Indeed, from a power-producing perspective, were 64 cubic centimetres an engine all by itself, it would be a scooter — a slightly bored-out scooter, perhaps, but a scooter nonetheless. Were an automaker to implement such an improvement, those 3.9 cubic inches — for that is what 64 cc is in Imperial units — would be a rounding error for one of the big-inch V8s Detroit is still dropping into its muscle cars. In other words, the 1260’s 3.6-millimetre stroke increase would not seem worthy, at least when viewed on mere spec sheet, of a 7,442-kilometre-long trip — with all the trimmings — to Spain’s tropical African paradise.

And yet, for all of that quibbling, the new engine is probably the Multistrada’s most significant step forward since the latest generation was introduced in 2010.
For one thing, early reports from Milan’s EICMA motorcycle show that the 1260 was less powerful than the outgoing 1200 have proved misleading. Yes, the 1200 was rated at 160 horsepower when it was upgraded in 2015. And, yes, the new 1260 is now rated at 158 hp. But Ducati changed its dynamometer testing methodology recently and, when run on the same dyno as the 1260, the outgoing 1200 spins just 152 hp.

But even six horsepower is hardly worthy of a trip to the Spanish islands. What did, however, justify the 38 hours of trans-Atlantic delays, interruptions and seemingly spontaneous re-routings — thanks TAP, I won’t be switching to “Portugal Mode” again anytime soon — is how much punchier in mid-range the 1260 feels. Ducati officially claims there’s an 18 percent boost in grunt at 5,500 rpm. I know what many of you are thinking: Claims of boosted mid-range almost always turn out to be spurious, all that “retuned for torque” and “superior mid-range throttle response” nothing but inflated marketing hype. But, in the new Multistrada’s case, there really is a noticeable bump in the big Duke’s mid-range. Not quite so much that you think Bologna snuck a turbocharger into the Multistrada’s stainless steel exhaust pipes, but a significant boost in punch nonetheless.

Officially, the 1262 cc Testatretta DTV — Ducati’s narrow-angle V-twin with Desmodromic variable valve timing — punches out 95.1 pound-feet of torque at 7,500 rpm. More importantly, 85 percent of those pound-feet are available at just 3,500 rpm and, says Ducati, the 1260 is the most powerful bike in its class at 4,000 rpm. Compared with the already grunty 1200, Ducati’s official dyno graph shows the new and old engines all but identical off idle and at the 9,500-rpm power peak, but the 1260 enjoying a huge, flat-as-a-tabletop surge from 3,500 rpm to 7,500.

During normal riding, anything over idle is a lunge forward, the increased mid-range really moving things along. To Testatretta 1260 is to never have to worry about downshifting. Just whack it and go. Power wheelies — assuming that the Multistrada’s Ducati Wheelie Control has been, uhm, appropriately adjusted — are a doddle in any of the first three gears. Even full-on superbikes will have trouble matching the 1260’s low-end throttle response. You’ll buy the 1260 for the horsepower; you’ll love it for the torque.

What’s most interesting about the new engine is that it is lifted, virtually unchanged (save for a relocation of the water pump and the gussying up of various trim bits) from the xDiavel. Now a cruiser — even a power cruiser like the xDiavel — would not seem an obvious source of an upgrade for an adventure tourer-cum-superbike, but it does have some unexpected benefits alongside that massive torque increase.

For one thing, while cruiser riders may pump up the tougher-than-thou attitude, in real life, they are typically spoiled Boomers who suffer little in the way of inconvenience or discomfort. The xDiavel engine, therefore, is gloriously free of the low-speed lurching and clutch basket rattling common to many other Dukes. In fact, Ducati’s biggest V-twin is also its most sophisticated, there being even less vibration through the pegs and bars than the smaller 950 Multistrada I rode last summer.

While it is gathering all the headlines, the engine is not the only aspect of the Multistrada that’s been upgraded for 2018, though, it must be said, a few of the revisions seem more brochure filler than practical improvement. For instance, scanning Ducati’s press kit, I’m reminded that the bodywork is now slightly more aerodynamic (I didn’t notice), there’s a better grab handle — lifted from the Enduro model — that makes fitment of aluminum cases less problematic for passengers (again, hardly headline news) and that new, lighter wheels reduce the 2018’s unsprung weight (I can’t recall there being much in the way of complaints about heavy rims).

Actually noteworthy, however, is the new TFT dashboard. Not only brighter and higher resolution, the dashboard also gets improved software. In practical terms that means not only is the screen more readable in bright sunshine, its menu is now much easier to decipher. In fact, Ducati’s latest digital display is the best in the business; yes, easier to manipulate than comparable BMW, Yamaha and even Honda systems. Changing the engine settings — Sport, Touring, Urban and Enduro — and managing the suspension adjustments (seemingly endless) may require navigating myriad submenus, but the flow (chart) is so obvious that you’ll pick it up in no time, a stark departure from lesser systems with which no amount of familiarity seems to lessen my contempt.

It’s a good thing because Ducati’s electronically adjustable Skyhook Suspension needed a serious fiddle. Worried all that extra grunt would make the new 1260 overly twitchy, Ducati’s engineers stretched the swingarm some 48 mm and kicked out the steering one degree. The former added the desired stability, but the altered rake makes the Multistrada feel a little chopper-ish on standard settings. And Ducati’s technicians had set the dampers to their firmest position, reducing brake dive so much that turn-in to Gran Canaria’s multitudinous switchbacks was compromised.

But, quick as you please — thanks to those aforementioned easy-to-decipher submenus — I was able to return the Multistrada to Ducati fleetness. A quick jog of the left thumb brought up “Suspension: Front,” which I quickly reduced to its softest setting. Moving over to “Load,” I jacked up the rear preload to two helmets and full saddlebags and, faster than you can say “Roberto’s your uncle,” the 1260 was transformed from what was initially listless into the razor sharp handling one expects from a Ducati (even those without clip-ons). The fiddle took all of about 10 seconds — even a routine stoplight is more than enough time to get in and out of the suspension submenu without fuss — the most convenient of all such systems I’ve tested. And, of course, making the same alterations on a bike with mechanically adjustable suspension would have taken eons, so kudos to both Ducati’s improved interface and the variability of the DSS suspension.

The one caution — and I am guessing more than a few of you are already latched onto this — is that the aforementioned “two helmets and full saddlebags” setting is the system’s maximum preload for the Sachs rear shock. Having used up all the rear shock’s spring preload to get the pointy steering I expected from a Ducati, adding a passenger would require even more. I noticed the same problem on the 950 on which I toured through Italy last summer. With my wife — and her shoes! — onboard and loading the saddlebags and top case to the gunwales, I had the (mechanically adjusted) preload wound up to its maximum and was still left wanting more. Indeed, a greater range of preload adjustability would be my first request for improvement to the 1260.

While on the subject of electronic gadgetry, it’s worth noting the Multistrada now has a novel Vehicle Hold Control (squeeze the front brake for three seconds and the big Duke won’t roll backwards on a hill). And the IMU enables not only the traction and wheelie control systems, but also Ducati’s new swiveling Cornering Lights, which illuminate the apex when you’re heeled over. Also noteworthy is that Ducati’s latest Quick Shift system lets you bang through the gears without letting off the throttle or disturbing your left hand. As such systems improve — and Ducati’s is one of the very best — they obviate the need for true, automotive-style dual?clutch transmissions.

Despite all this focus on speed and comportment, the Multistrada is still as close as Ducati gets to a full-on touring machine. From that perspective, the seat, though firm, is relatively comfortable over the long haul. The windshield is small (there’s a larger, optional touring screen as well), but provides turbulence-free coverage. And the reach to the handlebar is quite convenient. Only a tight seat-to-peg relationship — the result of higher pegs for more ground clearance; it’s a Ducati, after all — mars what might otherwise be exceptional comfort. The seat is adjustable, which does alleviate things a little, but then you’re sitting up higher in the windblast.

But those are known quibbles, and you wouldn’t be shopping a Multistrada if you were looking for BMW-like comfort and coverage. More important is that the new engine really ups the Multistrada’s game. While there may only be a 64-cubic-centimetre difference between the new Testatretta and the previous engine, the added displacement really is transformative.

Lastly, it’s worth noting that though we tested only one version of the new Multistrada, three trims are offered — four in Europe, which also gets a D-Air version — the Standard, S and Pikes Peak version. The base model ($21,195) comes with a manually-adjustable Sachs rear shock and KYB front fork as well as Brembo M4.32 four-piston front calipers. The S version I rode ($23,195) ups the game with the aforementioned DSS electronically adjustable suspension, the quick-shifter and Brembo M50 radial monoblock calipers. The fully sporty Pikes Peak ($27,195) adds an Öhlins TTX36 rear damper, a TiN treated 48-mm Öhlins front fork and a Termignoni exhaust system. Thanks to its carbon-fibre silencer and the jettisoning of Sachs electronic suspension hardware, the Pikes Peak, at 229 kg., weighs seven kilos less than the S.