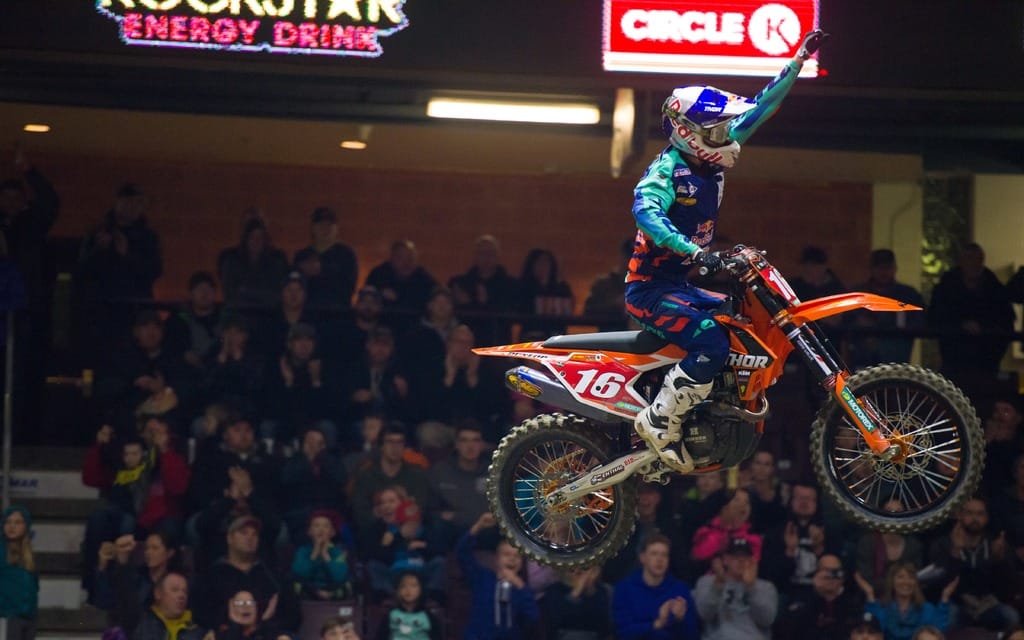 Round 4 of the Jetwerx AX Tour series will be a day to remember for newlywed Cole Thompson. After getting married to his longtime fiancée Chloe on Tuesday, Cole flew to his hometown in Ontario where he would experience one of his best race weekends this season. Thompson qualified 1st, won his heat race and went on to win the Clash class as well as the 450 final. Cole made it look easy by grabbing the lead early every time the gate dropped in front of him and rode smoothly to victory.

“It’s been an awesome week for me, personally and professionally. I really want to thank everyone who came to watch us racing and who cheered for me. You can’t underestimate the power of your hometown crowd. The season is just starting but I’m really happy with my results so far and I want to keep this momentum through 2018.”

Tanner Ward was looking to redeem himself after a though 2nd & 3rd round. He impressed the crowd as soon as he got on the track by being the only one in the 250 class to hit some intense rhythm sections. Ward also showed great speed from the beginning, getting the 3rd fastest time in practice. Unfortunately, Tanner found himself on the ground during his heat race and had to start on the 2nd row for the final. He made the best of it and pushed hard to make some important passes early in the main event. Ward fought his way to a podium position which helped him gain valuable championship points.

“Last weekend was a mix of ups and downs but I am building on it. I’m looking forward to racing closer to home for the last round of the AX Tour series and hopefully climbing a little higher on the podium”

KTM Canada, Inc. would like to thank Red Bull, Thor & Parts Canada for their support, as well as all our other loyal team sponsors.