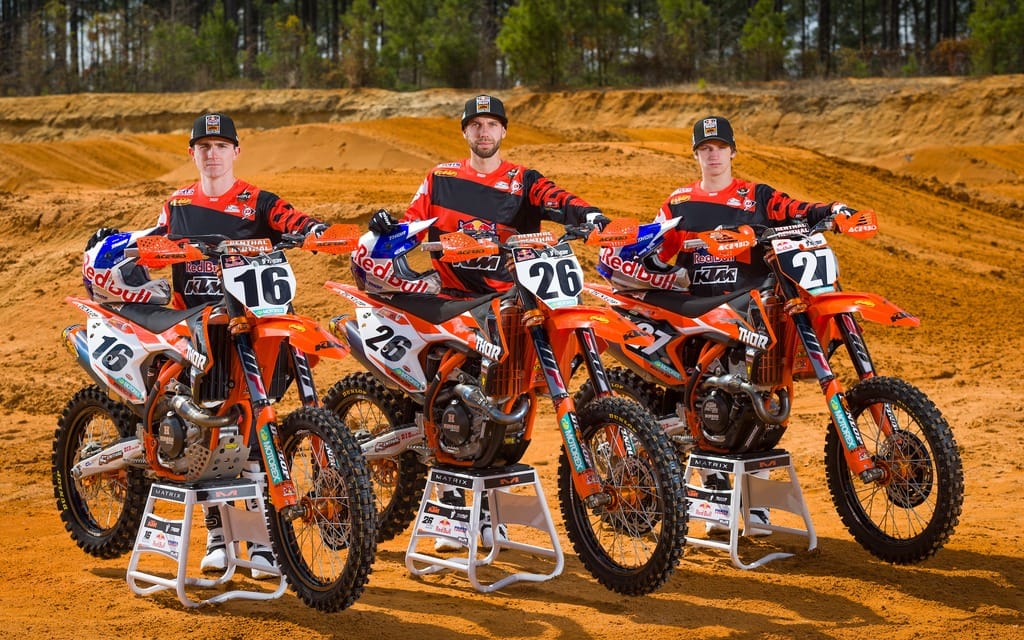 KTM is excited to officially announce the addition of Tanner Ward to the 2018 KTM Red Bull Thor Racing Team. With a freshly signed 2-year contract under his belt, Ward will receive factory support during the next two season in the 250 Pro class. The young Ontarian rider showed great performance throughout the past 3 years as an amateur under the KTM Orange Brigade program. We are looking forward to see him grow as a professional rider. Riding aboard the KTM 250 SX-F, Tanner will participate in the full Triple Crown series, attending Arenacross, Motocross & Supercross.

“I worked really hard as an amateur to be where I am today. I realize the opportunity I have getting Factory support during my rookie season and you can be sure I will take full advantage of it. It’s also really great for me to start my pro career with a team I know and trust. I’ve been an Orange Bleeder for a little over 4 years now and it definitely helped build my confidence heading to the races. I’m looking forward to many gate drops and podiums with my team.”

Returning for his 9th season with the KTM Canada race team, Kaven Benoit will be chasing the 450 MX title for 2018. Kaven had signed a 3-year deal with the KTM team back in late 2016 and is now looking to redeem himself from an up and down 2017 season. Benoit has been riding his KTM 450 SX-F for over 2 years, reaching the podium multiple times. Kaven is patiently awaiting the first gate drop of the season and looking forward to race the fast Canadian competition.

“I used this off-season to upgrade my training which also left more time for my past injuries to heal correctly. I`m coming into the 2018 season more prepared than I’ve ever been, ready to go after the 450 outdoor championship! I know I have the speed to be out there and can’t wait to be back at the races.”

Following some excellent performances in the light class, Cole Thompson will be moving up to the 450 class for 2018. Cole has been a key member of the KTM Canada team since he joined, back in 2013. After recently winning a 250 Championship and gaining a lot of racing experience, Thompson is READY TO RACE his KTM 450 SX-F up to the top step of the podium. Cole will be racing the entire Jetwerx Triple Crown Series, attending all the Canadian Arenacross, Motocross & Supercross races.

“I’ve been back on the 450 for a little while now and feel really comfortable on it. We were able to ease my transition onto the bigger bike by training on a 350 SX-F most of last year. I am excited about the new series and looking forward to show my skills on both the indoor and outdoor tracks. I feel prepared and I’m ready to chase down the 100,000$ available through the Jetwerx Triple Crown.”

The KTM Red Bull Thor Racing Team would also like to take the opportunity to thank all of their loyal team sponsors, for their constant support.