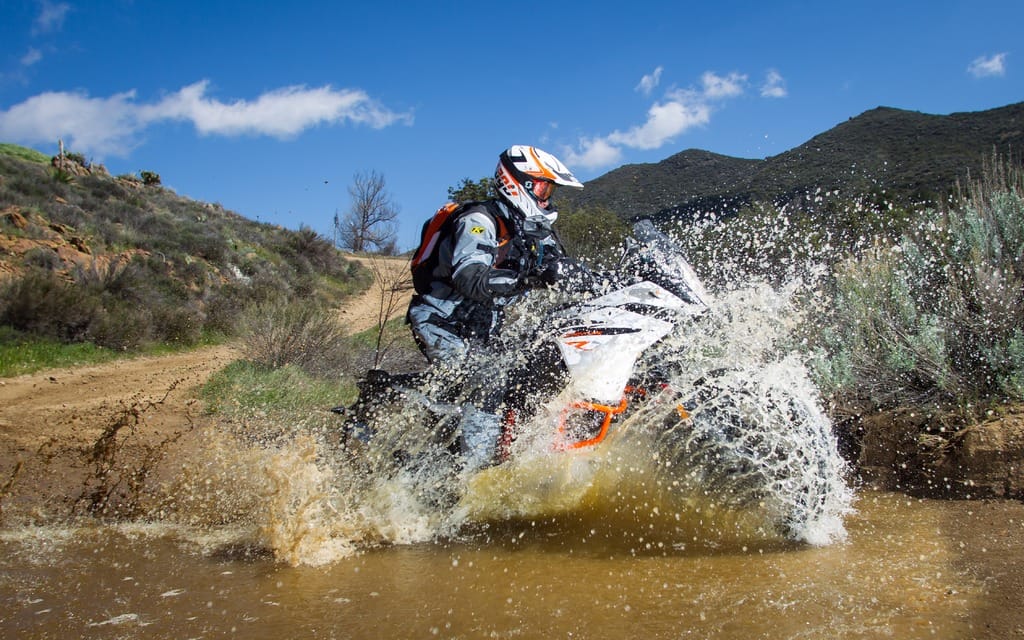 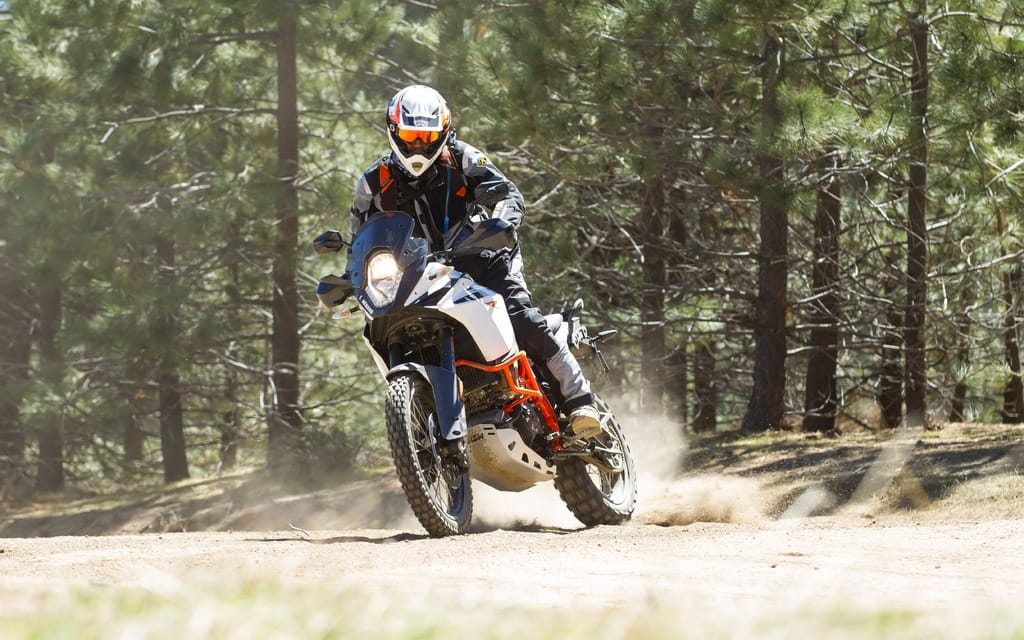 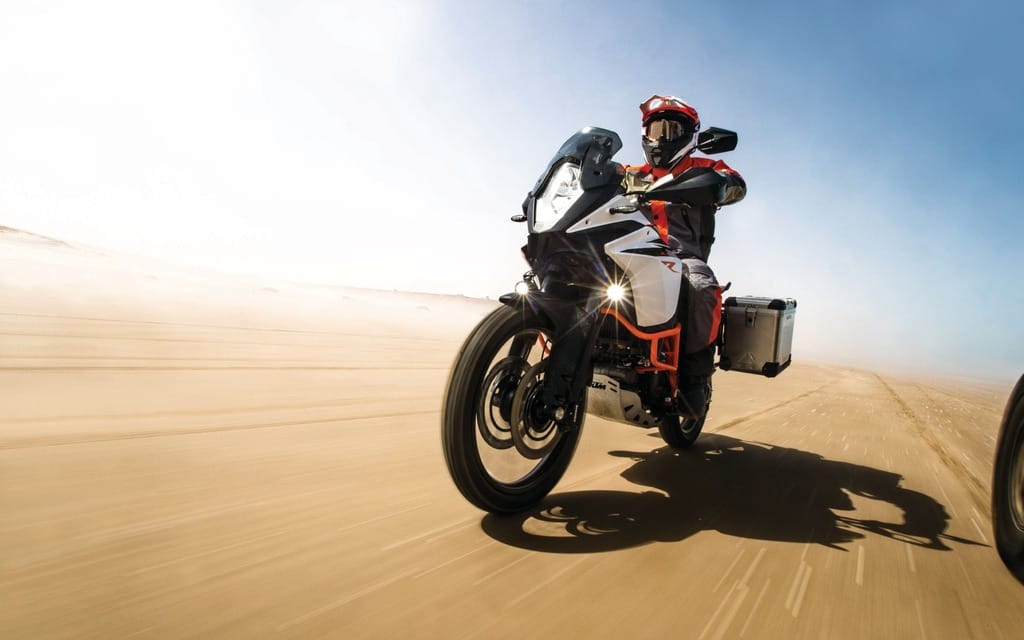 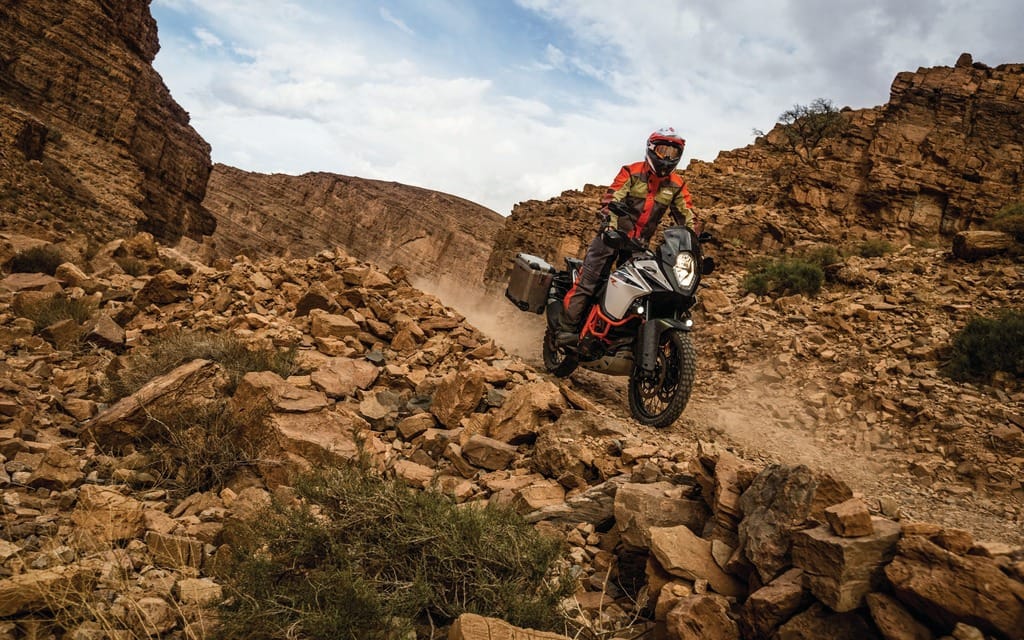 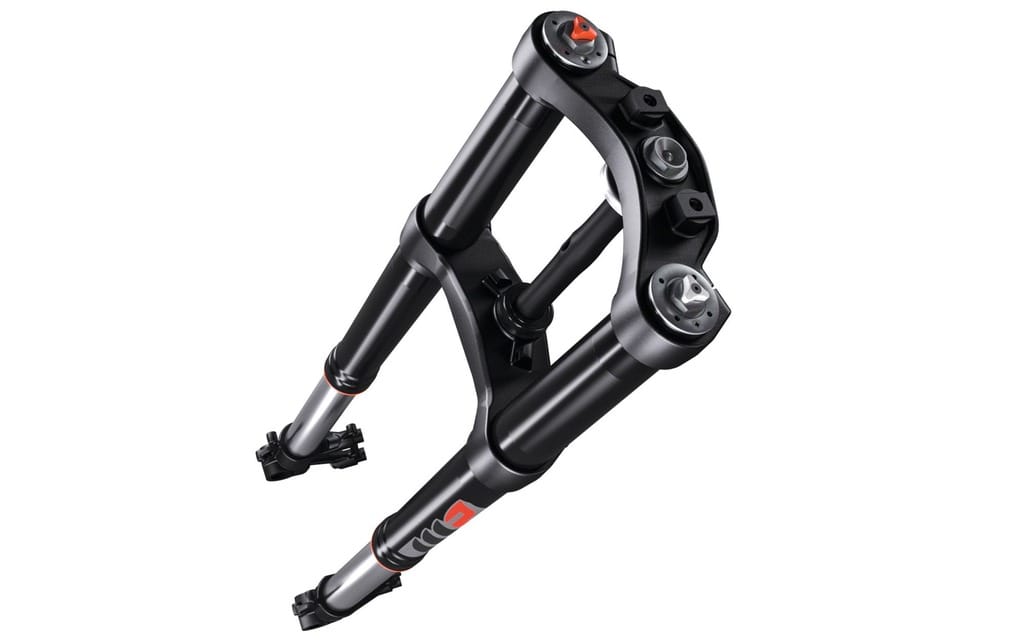 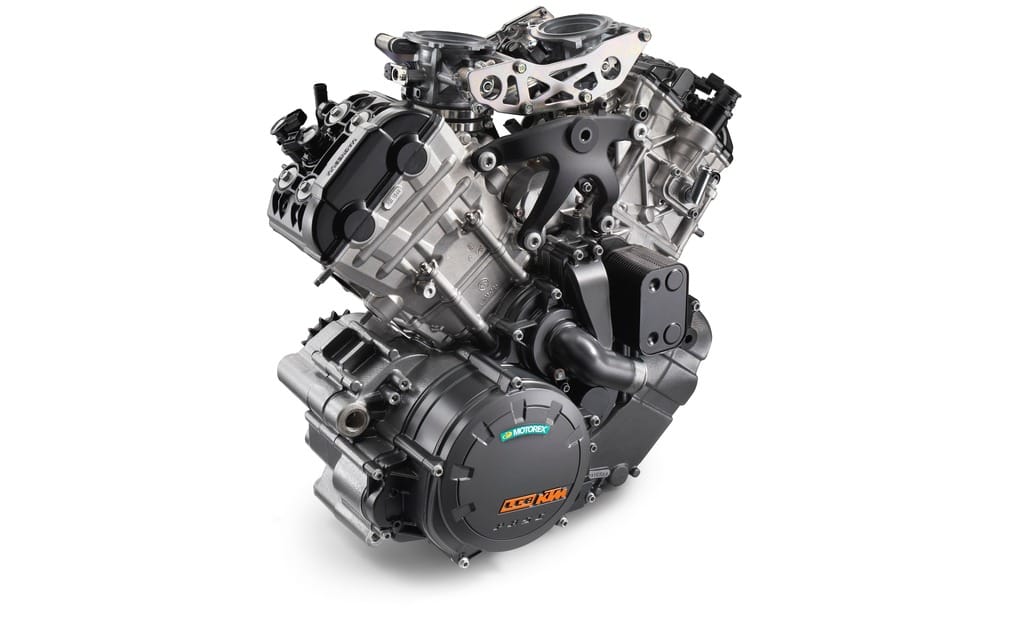 Travel-enduro goes from street to off-road with a click of the switch
Like coffee and cigars, riding big adventure motorcycles in true off-road conditions is an acquired taste. If at first you are disinclined to bringing these giants along the dirt paths, once you have tasted the experience, it’s hard to not think about it every time you pass by a dirt road. Manufacturers are aware of this and therefore offer consumers more and more models with the possibility of riding off-road. If some models do it better than others, they can all at least promise that their owners will look like true adventurers at their handlebars. The rest is up to them. KTM has always assured a strong presence in this segment with true race-ready performance — to such an extent that it even offered two models of almost identical displacement with the 1190R and the 1290R. Be it a development outburst, stroke of genius or market flooding attempt, it worked for the 1190R as it was the most sold model in this category in North America for KTM. So much so that when it came time to talk about the new 2017 line-up in this category, the big cheeses of Mattighofen in Austria asked the guys of KTM North America their opinion. What would be the model that North American consumers want? Their answer: a motorcycle like the 1190R but lighter, with a better power-to-weight ratio and lower pricetag than the 1190R.

It’s 8 a.m. and I’m at KTM North America’s head office in Murietta, California. The drab building with an orange line on its wall is located in an equally drab industrial area of this little drab town in southwestern California. We are about 15 journalists seated in front of the small team that KTM has assembled for the launch of the 1090R. They briefly describe the new bike but I feel that everyone is in a hurry to go riding. KTM employees are for the most part passionate riders. They talk about the dual-purpose riding heaven that is this part of California and after about 15 minutes of presentation we are invited to put on our equipment. We are leaving for a two-day ride on the surrounding roads as well as the mountains and desert trails nearby. Quadruple Baja 1000 champion Quinn Cody will lead my group. I clench my teeth and tell myself that if he decides to ride at his usual pace, I will not be able to follow him. I am not alone in thinking this, nor the only one who does not speak of it.

KTM asked Cody for help in developing this motorcycle, which is a clearer alternative to the 1290 Super Adventure R than the 1190 Adventure could ever be. Moreover, with the arrival of the Africa twin CRF1000L, KTM had to offer a real alternative to this new arrival (or re-entry) in the “medium” adventurers category. KTM wanted to create an adventure bike that would be more agile on the trails than the 1190R and 1290R while maintaining a level of comfort and performance more than acceptable for road riding. The 1090R is therefore a big motorcycle that can take you from Alaska to Ushuaia but also allow you to go banzai in your favorite trails. The diet to go down from 1190 to 1090 involved a lighter engine and overall weight loss of 22 pounds and a lowered retail price. All this while improving its weight / power ratio. At about the same weight as the defunct Baja 990 this 1090R felt a lot like a 990 but more powerful and more agile.
True to KTM’s big adventurers family this “travel enduro” transitions transparently between city and off-road riding with a few clicks of the switches.

Let’s start with the distinctive point for this kind of motorcycle: suspension. Cody and the development team worked on a 48 mm front fork offering 220 mm of travel with separate preload and rebound systems, and a progressive damping system (PDS) suspension at the rear using a monoshock that hardens as it approaches the end of its travel. With a possible travel of 220 mm and 250 mm of ground clearance, the only time I felt the suspension bottoming was over big washouts on the sandy roads of the Anza-Borrego desert state park. I know of quite a few suspensions that would have bottomed hard way more often on these roads.

The 21-inch wheel at the front is my favourite size for off-road rides on these big adventure motorcycles. They allow you to overcome many obstacles easily and provide impressive stability on the road. The tire is a tubeless TKC 80 mounted on a spoked wheel. An 18-inch wheel is fitted to the rear axle.
The four-stroke V-twin LC8 engine has a claimed 125 horsepower and is so nice that I’d kiss it. It has just enough power to give wings to this bike but is also gentle enough to keep the traction on the ground without electronic aids intervening all the time. With its four power delivery modes (Sport, Road, Rain and Offroad) you can choose whatever mode is best for your type of riding.

The off-road engine mode reduces power to 100 hp and softens the accelerator response. Combined with the off-road traction control, this allows the rider to control the bike easily on sandy roads and pebble climbs. Torque is enhanced in the lower revs to make it even better in low speed technical sections. But with a little bravery, experience and/or unconsciousness, you can ride the 1090R in sport mode even on trails.

ABS in off-road mode optimizes the ABS on the front wheel while deactivating the rear wheel ABS, which allows the rider to lock the rear wheel and slide in the curves. This also allows for proper braking even on slippery surfaces and drives the 1090R almost as if it was a 500EX-C. Thrilling! Even when riding on slippery surfaces like this layer of sand of varying depths covering the desert roads, the braking brought me enough confidence to brake later and later before turns as the day passed by.

Traction control also helped keep the pace on sand. Developed in close cooperation with Bosch, this safety system reacts in milliseconds in the event of rear wheel spin and closes the butterflies to regain traction. The standard Traction Control (TC) system includes four different riding modes, selectable from the multifunction switch on the left handlebar. The “Sport” mode allows a bit of drift and a noticeable amount of skid; the “Street” mode ensures safe riding when the engine is at full power; the “Rain” mode allows fast intervention and maximum grip under wet conditions; and the “Offroad” mode allows full skids, and doubles the speed of the wheel. And there is even a completely OFF mode cancelling the TC to ride like in the good old days.

The slipper clutch was very useful during the more technical parts of our ride and allowed me to concentrate on the riding rather than the clutch.
The 1090R is equipped with anti-crash bars, a shorter off-road type windscreen and an orange frame. The off-road seat is installed 35 inches off the ground and offers a good anti-slip grip to keep us in the saddle.

The dashboard is inherited from the 1190 and is not as impressive as the Super Adventure but it offers all the data you would expect in a motorcycle of this type. Once accustomed with the different menus offered, it is easy to navigate with the buttons on the left side of the handlebar.

All these elements make this big beast a tank that can take whatever you throw at it or allow you to ride fast on the pavement. It truly is a “best of both worlds” kind of bike. You want to ride fast along winding paths? OK. You want to attack the trails and the rocky climbs? No problem. You want to go sport touring? Go for it. The words “extreme versatility” best describe this 1090R.

With this new lighter, faster and better bike KTM proves that it is not only ready to race but also ready to react when the competition proposes models that could pull the rug out from under one of their model’s wheels. The 1090R defends itself more than well on all terrain types and with a price of $15,600 it also defends itself quite well in the dealer showroom.