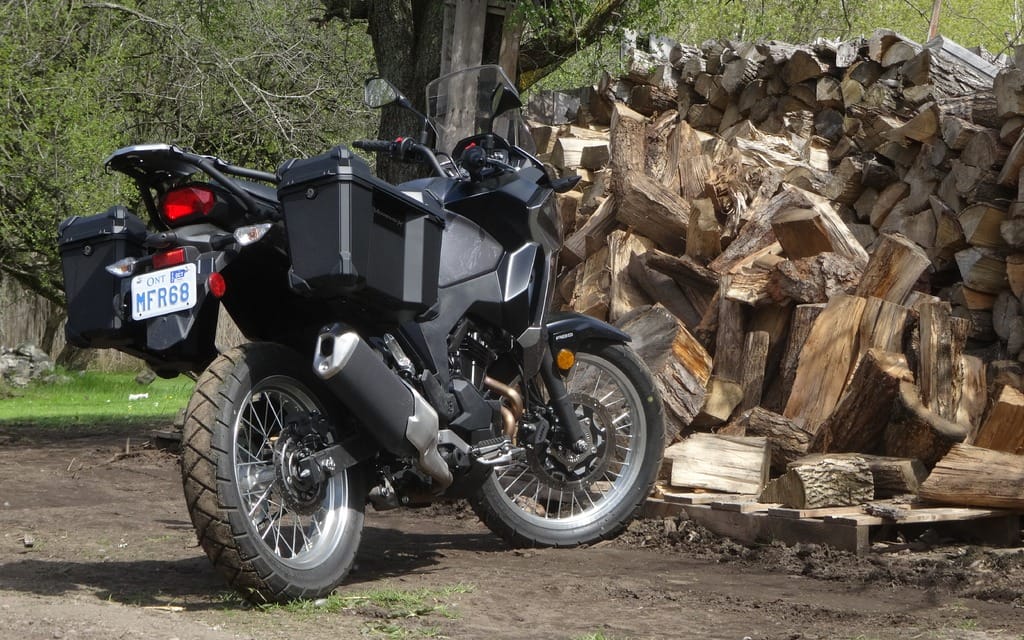 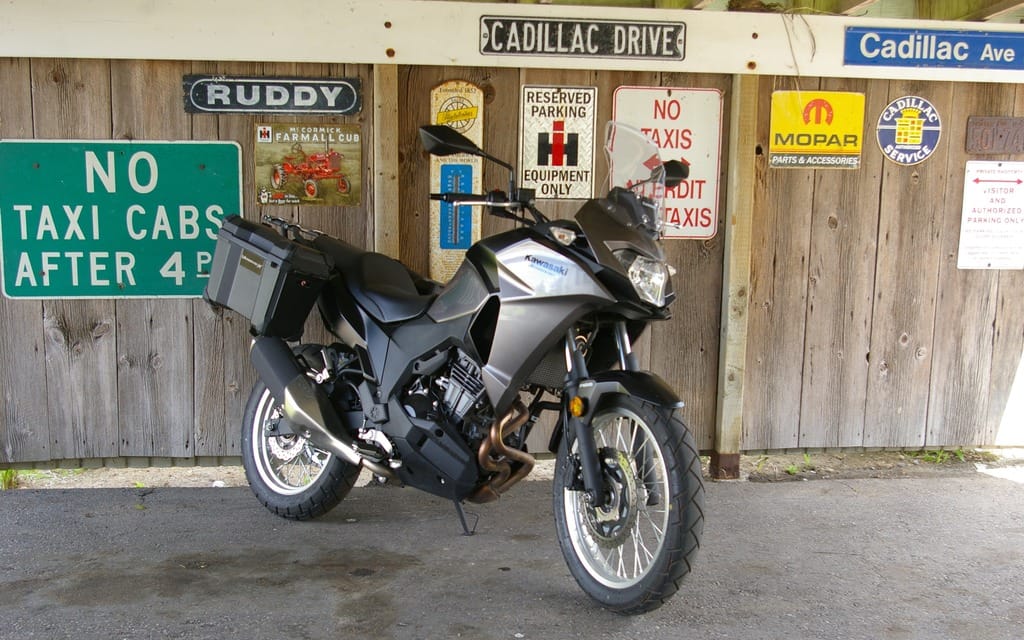 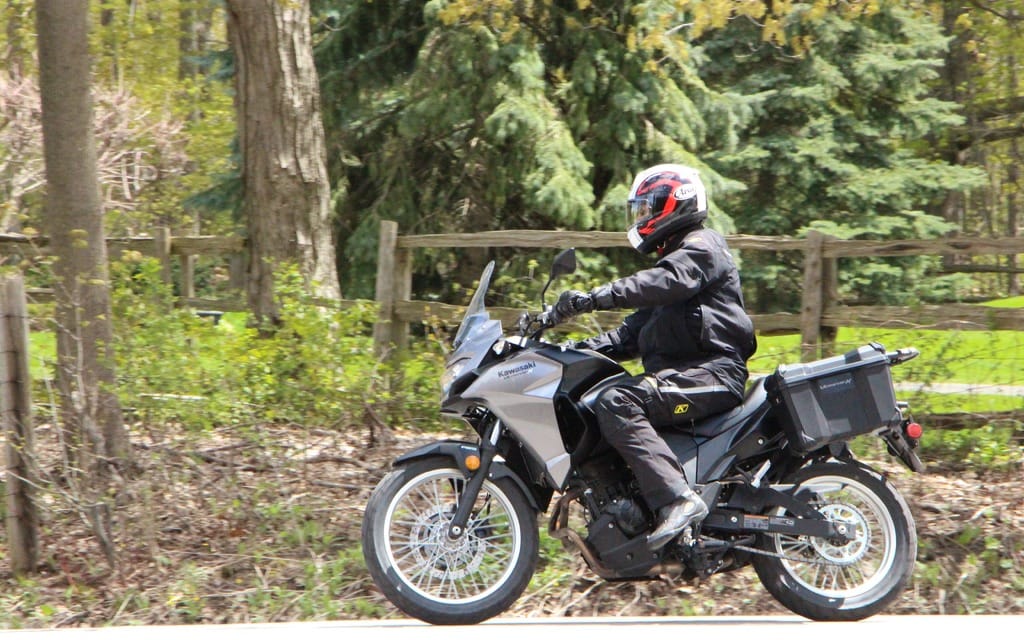 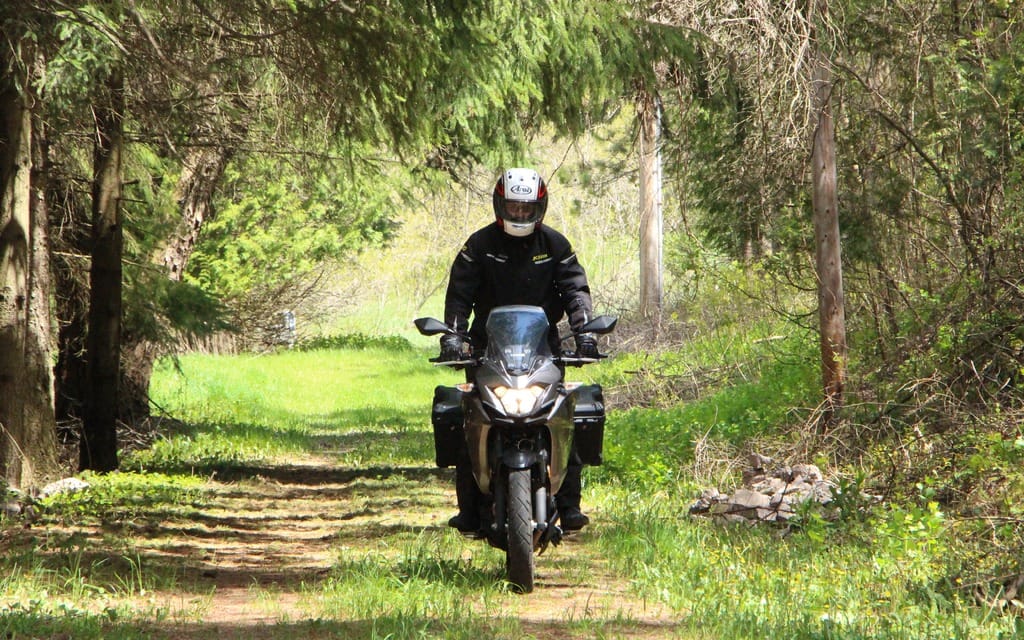 Team Green’s newest 300 is ready to take on all comers
Think of the seminal superbikes from the last 50 years. Screaming two-stroke triples. The original, double-overhead-cam (almost) litre bike. The first 300-plus horsepower, supercharged superbike. What’s the one thing they all had in common?

Well, besides causing equal parts outrage and indignation at the time of their introduction — 1969 for the H1 Mach III, 1972 for the orange and brown “New York Steak” Z1, and 2015 for the neon green H1R — they’ve all been Kawasakis. Yes, Team Green has always been synonymous with silly, stupid, stupefying power, a two-wheel testament to Carroll Shelby’s age-defying maxim that “there is no such thing as too much power. Just not enough traction.”

It comes as a bit of a surprise, then, that the bike Canadian Kawasaki sales staff are all a-twitter for displaces just 296 cc, has but a single weedy disc brake, and isn’t even a sport bike. Welcome the 2017 Versys-X 300, a minuscule adventure tourer whose time has more than come.

The formula is fairly simple: Take the proven high-revving, 296 cc parallel twin that powers Kawasaki’s littlest Ninja and slap it into a quasi-dirtbike platform. Gussy it up a bit with antilock brake, throw on some (available) saddlebags/top case, and you would have a fair rendition of a true adventure bike, albeit pint-sized. In retrospect, it’s not such a far-fetched concept, what with little tiddlers being so popular these days and adventure tourers all the rage.

What truly sets apart the Versys, however, is that it’s a high concept extremely well executed. The engine, for instance, may not be much changed — basically, a revised airbox/exhaust combo — from the Ninja 300, but the minor alterations do make it a bit more pleasant. Redlined at a modest — for a small-displacement twin — 12,000 rpm, the X actually possesses some midrange torque and even a modicum of low-end grunt before peaking, according to Kawasaki, at 39 horsepower at 11,500 rpm. To be sure, forward progress is best accomplished by revving its little nuts off, but you don’t need to wring it to death just to keep up with traffic. Indeed, short-shifting at 6,000 rpm — yes, six grand is short-shifting for a tiddler twin — is more than enough to keep up with the cagers. Even in top gear, it’s possible to just roll on the gas without downshifting to pass slow-moving tractor-trailers. Power may be modest but it will be more than adequate for the novice riders Kawasaki intends as the 300’s primary clientele.

That said, the incredible revs the little twin spins at everyday speeds can be a little disconcerting. At 100 km/h, the Versys is whirring along at 7,500 rpm. At 120, it’s screaming away at nine grand. For someone accustomed to a big twin — my over-geared old V-Strom spins at a calming 4,000 rpm at a buck-twenty — it requires dispensing with any notion of mechanical sympathy. That said, the engine is — thanks to a balancing shaft — quite smooth, and the Versys feels as though it could do this all day long without the slightest bit of distress. It’s also, no surprise, frugal. Even constantly wringing it out had me averaging 4.2 litres per 100 kilometres, which means the 17-litre gas tank should be good for about 400 km.

If the engine hasn’t quite left its small bike roots behind, the chassis makes a more valiant effort. Obviously, the Versys-X, at 175 kg, is a lot lighter than full-sized quasi-tourers — a fully-outfitted BMW R1200GS Adventure, for instance, tips the scales at around 250 kg — but it never really feels small.

For one thing, the seat, as per adventure bike norm, is significantly higher than that of a sport bike. Indeed, at 815 mm off the ground, the seat is not that much different from other mid-sized adventurers’. That makes for a surprisingly rangy seating position, close to what one would expect from a larger Versys (the 650’s seat stands 840 mm off terra firma, which the 300 can match with the optional 25 mm taller Ergo-Fit seat). From a seating position point of view — reach to the handlebars, spaciousness of seat, etc. — the Versys feels almost full-sized. That might not be ideal for novices of diminutive stature, but it gives taller beginners a choice beyond low-seat cruiser and sport bikes.

The same outsized performance applies to the chassis. Handling, as one might suspect, is light, the steering lightning quick. On the other hand, the X is not nearly as darty as one might expect from such a lightweight package and the modest weight only lightly tasks the IRC (sorta, kinda) off-road GP-210 Trail Winners — 100/90-19 in front and 130/80-17 at the rear — so you can attack hairpins and sweepers alike with a surprising degree of élan.

Its light weight also makes the occasional jaunt off the beaten path a comparative doddle. Again, compared with some of the behemoth adventure tourers that dare claim off-road worthiness, the Versys 300 is a veritable motocrosser. And, if you do drop it, you won’t need the strength of Samson to get it upright again. That said, the Versys — despite the “X” moniker that I think is supposed to denote off-road ability — isn’t going anywhere near the Dakar. Despite Kawasaki’s labelling the suspension “long travel,” there’s a decidedly normal 130 mm at the front and 148 mm at the rear. In other words, the occasional gravel road and the lightest of trails are the 300’s limits, its primary off-road ability being, again, its relatively light weight.

Much more important, however, is that Team Green’s bean counters didn’t skimp on the components. The 41 mm conventional front fork and Bottom-Link Uni-Trak may not offer much adjustability — just preload at the rear — but the damping and spring rates are very well chosen. Indeed, those looking for sporty handling on the road will find the suspension adequately firm(ish).

The other notable feature of Kawasaki’s junior adventurer is the build quality visible throughout. The main components — stainless steel exhaust, spoke wheels, etc. — look top notch, none of the switchgear looks cheap and the panel gaps speak to a surprising attention to detail considering the price. On a price-adjusted basis, this may be the best-built Kawasaki to date.

The Versys is also surprisingly well equipped. Even at the bike’s $6,399 base price, anti-lock brakes are standard in Canada. Ditto, the Assist & Slipper clutch, which reduces the clutch lever effort (as if a 296 cc twin ever had a tough clutch pull) and even slips during over-run so that ham-handed downshifting doesn’t result in a skidding rear wheel. Optional are some nifty adventure-style square saddlebags ($561.84, including mounting hardware) and a top case (an extremely cost-effective $136.33 in black, an extra $120.34 if you want it colour-matched). Yes, they’re made of plastic instead of the de rigueur high-tech-looking aluminum, and the saddlebags carry just 17 litres of cargo (the top case is good for 30 litres) but they’re well-made and relatively cheap. You can also get a sturdy engine guard (sensibly priced at $298.16) and a centrestand (a little pricey at $335.75) for the Versys-X.

Complaints are few. In fact, there are only two. First is the seat. Broad and well-shaped it may be, but the foam feels stiff enough for “sitting the plank” becoming the Dread Pirate Roberts’ go-to torture. In fact, in the long haul, it’s not as uncomfortable as it initially portends to be, but, nonetheless, Kawasaki could easily get away with 20 percent softer foam and the Versys would be better for it.

The other thing of note is the front brake. The combination of 290 mm disc and two-piston caliper provide adequate stopping power, but require a pretty hefty grip. It’s actually sensible to make it at least a little difficult for novice riders to lock the front brake, panic, especially among new riders, being an easy way to take a tumble with overly aggressive application of front binder. But the Versys already has that covered with its standard anti-lock brake system, and braking hard enough to activate the front ABS requires the strength of Charles Atlas. That said, there is enough braking power available; you just need to strenuously exercise all four digits of your right hand to get at it.

But that’s it. Otherwise, the Versys-X is a home run, a beginner’s bike that would not necessarily be out of place in an experienced rider’s garage. As long as you can manage the (comparatively) tall saddle, it’s the best sub-300 cc beginner bike I’ve tested.