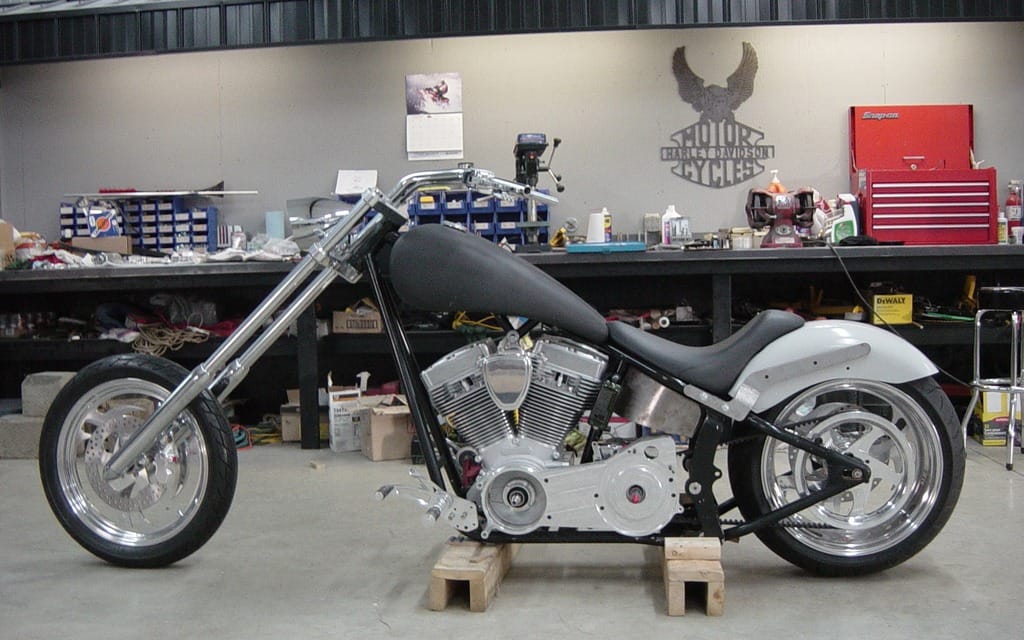 The phrase “custom chopper” is almost an oxymoron—the damn things are ubiquitous and too often follow the same template: long fork, raked frame, ridiculously wide rear wheel, ultralow seat, forward footpegs. It’s hard to get excited about a motorcycle that starts out uncomfortable and gets worse with every degree of lean angle, but Newfoundland resident Brian Janes didn’t try to build exactly that when he set out in 2006 to construct a chopper. Janes was a Harley-Davidson owner, and he had seen biker-build-off TV shows, so the idea of building a chopper appealed to him. He wanted something rideable, though, and something that he could put together readily. “I thought it would be a neat challenge,” he said in a Skype conversation—but his first thought, that it could be done the easy way, was on second thought not what he wanted.

“When I started out I considered buying a kit, but that’s a bit lame. I wanted to be more creative.” That was when he thought of eBay. “Being from Newfoundland, I didn’t have a lot of custom shops available. Where would I get the parts? At the time, eBay was a bit of a craze, everybody was buying stuff on eBay. And when I first looked at it, I was astounded, it was like I’d opened the door to the largest warehouse I could imagine.”

He started with the frame. Actually, he started with research—he said he spent the first half of the year-long project in planning, which might explain his ultimate success. But the first thing he bought through eBay was the frame, built by Rolling Thunder in Saint-Côme, Québec. But when you build something by UPS, every delivery can come with a new problem—or a new awareness, which is the same thing. “I discovered something they refer to as rake and trail. It determines how the bike is gonna handle.” Of course, you and I know that, but knowing what rake and trail mean and applying them to the building of a motorcycle are two or three different things. For Janes, it was a matter of discovery and then application. “The problem that could occur if you get the rake and trail numbers wrong is a high-speed wobble,” he said. “That could be pretty dangerous.” He dug into the Internet again, “and I began to understand the combination of things that control rake and trail. The spec of the frame, the stretch and angle, and in combination with that the triple tree angle, the length of the fork, and the size of the front wheel. There are helpful things on the Internet that can help you work out that math. It’s simply a mathematical calculation, really.”

Once he had the frame, he began looking for a Harley-Davidson engine. The frame style determines several things, though, including the rear wheel width, and the type of engine you can make fit. He found a Twin Cam engine in B.C. at an attractive price, but the frame was made for an Evolution type engine; he made the round engine fit the square hole by fitting an adaptor plate to the frame. Everything, it seems, determines how everything else will fit. Eventually (specifically, a year after he began the research, in the summer of 2007) it was together and ready. Ten years later, he’s changed the carb but not much else and he still likes the bike he put together with delivery from eBay.

He said it’s comfortable, when used for short haul cruising, and the handling qualities are fine. “It’s just at low speed that your handling is different. In a parking lot, when you’re pulling out, you’ve got to make a wider turn than on a conventional bike. And you’ve got to be mindful of that when you’re pulling out of a parking lot into traffic, you’d better be certain of your line because you can’t do the same nimble things that you can on a conventional motorcycle.”

He said he’s never added up the total cost, but he likely “could have purchased a new one for less money at a dealership.” Still, if it’s the journey, not the destination, for Janes the journey was made in his shop, with a rag in his pocket and a pencil above his ear. And it was a good enough experience that he’s considering doing another.