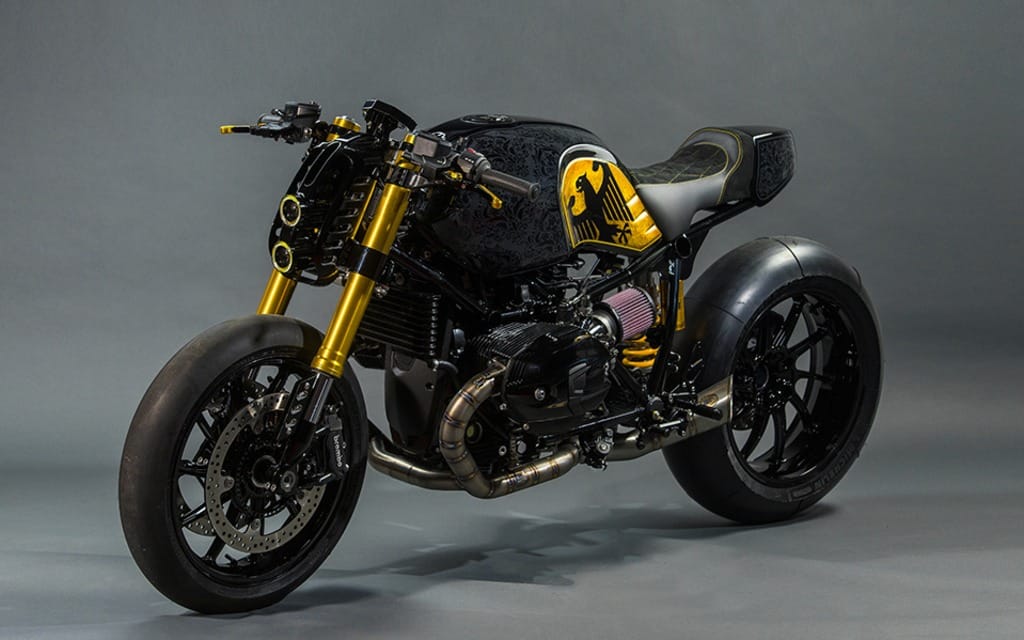 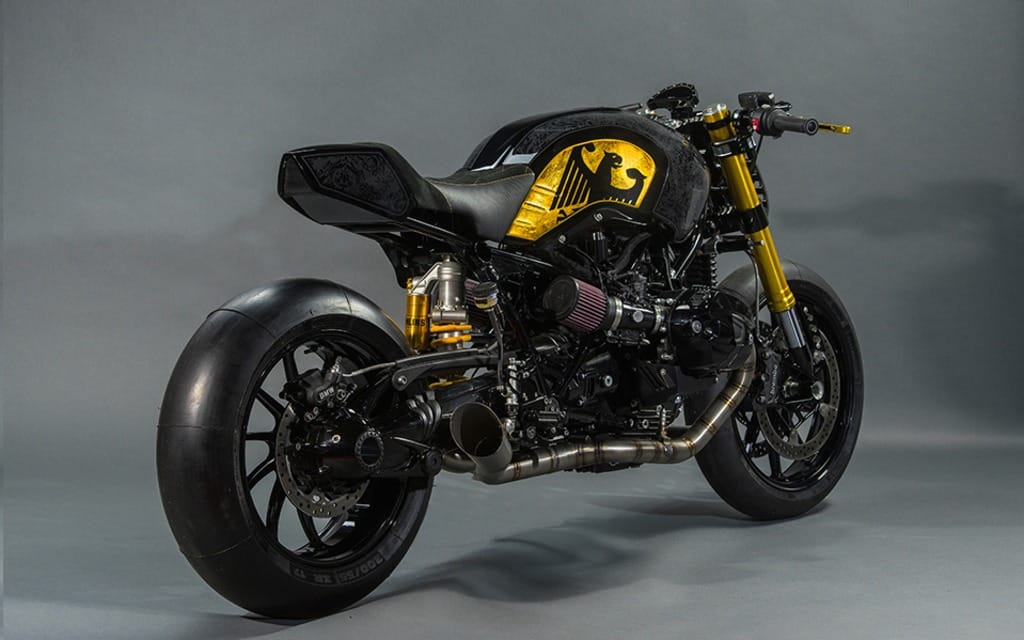 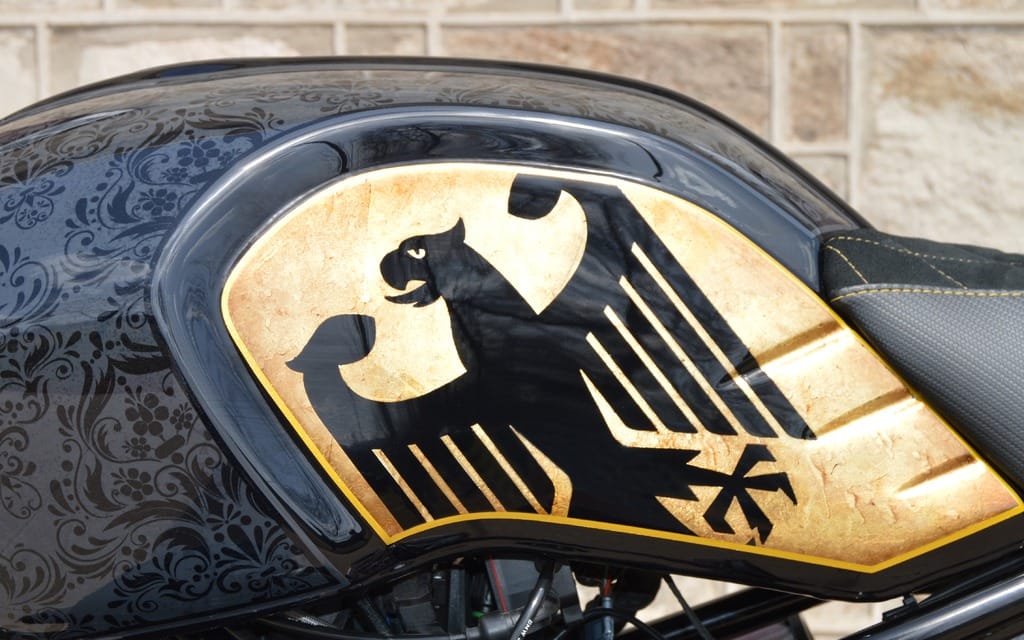 Dressed to the nines

Hamilton, Ontario, shop turns an R nineT into a Wraith
By L. Ramalho

Developed to celebrate the 40th anniversary of the R90S, the BMW R nineT has very quickly become a flagship model for BMW Motorrad. So much so that five versions have been developed since the initial launch in 2013. With five variations of one model to choose from, it should be easy for an enthusiast to have the motorcycle of his dreams. Ryan Cartier, however, wanted something that no one else had, he wanted something mean and aggressive looking, and that is where ACP Customs stepped in.

The work of ACP Customs and Mick Ackermann is not new to our readers as Cycle Canada has featured their modified Yamaha XV920 and their resto-mod Suzuki GSX1100s; however, their BMW R nineT is certainly a step in a new direction.

The R nineT is a favoured platform among custom motorcycle builders, but the challenge to make something unique out of an often-modified platform was gladly accepted by Mick Ackermann. “There are a lot of R nineTs out there, so we wanted to build something that stood out,” he told Cycle Canada. Named the “Wraith,” this 2016 BMW R nineT certainly turns heads. Ryan gave carte blanche to ACP Customs with the design, something that Mick was more than happy to use. “When you’re handed the keys and told to make something cool, it’s certainly is an honour but a serious challenge as well.”

One of the more eye-catching features of the Wraith is the front end. It features dual projector headlights in a custom billet aluminum housing, designed and CNC machined by ACP Customs. “The CAD design process is always exciting, but holding the final product in your hands is a great feeling all on its own,” Ackerman said. A custom ACP triple tree set and gauge mount were also made and powdercoated in-house. A Motogadget MotoscopePro gauge and m-Blaze Cone turn signals simply removed a lot of the typical clutter. AC Schnitzer clip-ons are also featured on the front end in order to give the rider a more race oriented position. “We see a lot of vintage builds upgraded with modern front ends, but we wanted to take this a step further, we wanted to make it not only modern but also futuristic.” Being a fan of the science fiction genre, it is easy to see where Mick’s design influence has come from.

The rear section of the Wraith was also heavily modified. “The subframe was built to lend a more aggressive stance to the bike. The square tubing of the original subframe was also replaced in favour of the same round tubing the main frame uses and then strengthened with frame gussets and bracing.” The fibreglass tail started as a nondescript piece of foam, hand-carved by ACP. The seat is made by Mike’s Upholstery in Hamilton and is wrapped in Alcantara and carbon fibre fabric. The fibreglass tail and custom seat seamlessly flow into the lines of the bike. “We made a sleek undertail and integrated the tail light into the tail piece just to keep everything neat and tidy.” The Öhlins suspension adds great functionality and “the bright gold also plays nicely with the overall look of the bike.”

The direction of the paint went with a darker motif and was completed by Jensen’s Custom Paint in Oshawa. Expertly finished with a goldleaf German Eagle and shadowed filigree against a deep black, the paint ties all of the custom pieces together. “We wanted something unique and different with the paint, but it needed to be elegant as well. The gold leafing on the knee dents is just phenomenal and the filigree looks amazing in the daylight with the subtle sparkle.”

The blackout of the bike continues with the triple trees, engine side covers and the frame getting coated in black keeping things looking dark and mean. The frame is exposed and opened up by eliminating the air box and migrating to dual K&N air intake cones. “With modern bikes, it is challenging to relocate electronics, air boxes and so on to achieve the look that you are after. In this case the final results are well worth it.”

The handmade titanium exhaust from Zard is well crafted and paired with a Bazzaz Z-Fi fuel controller. “With the air intake mods and new exhaust, we knew things needed to be tuned properly and using the Bazzaz unit let us to that in a reliable manner.” AC Schnitzer rims are powdercoated in wet-black and wrapped in sticky Michelin Power Slicks. Fully adjustable Sato Racing rear sets from Japan complete the aggressive tone of the bike. “It’s a different style of bike for us, but one that we definitely gravitate towards.”

So, what is next for ACP Customs? “We are working on a Dyna at the moment with plans of a Nightrod in the winter, and our very own Katana GSX1100s project is also in the works. We are wrapping up our glow-in-the-dark 1976 Honda CB550 as well, which has been a labour of love for us.”