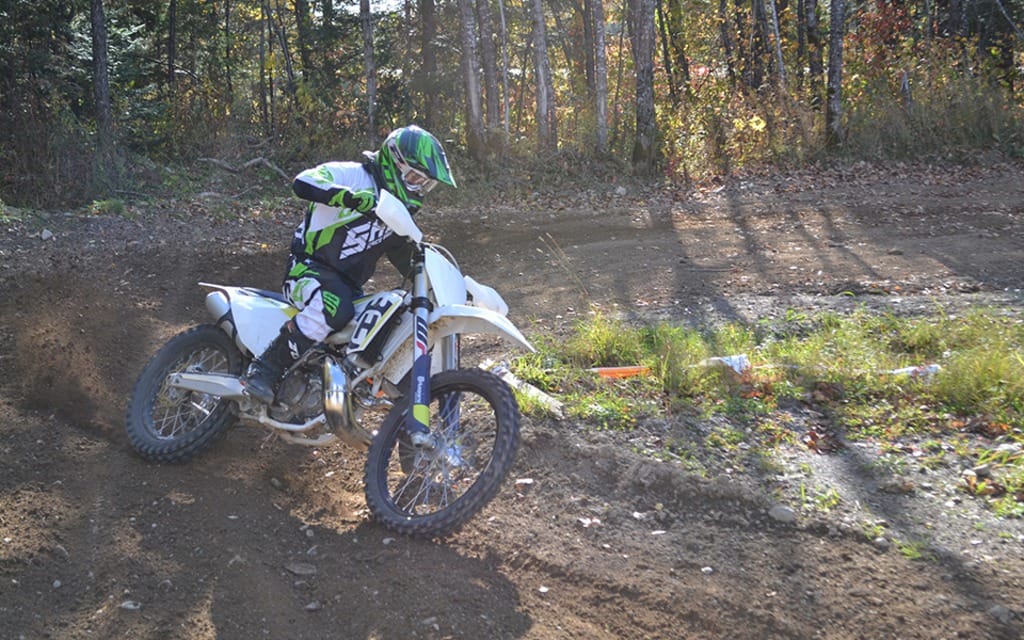 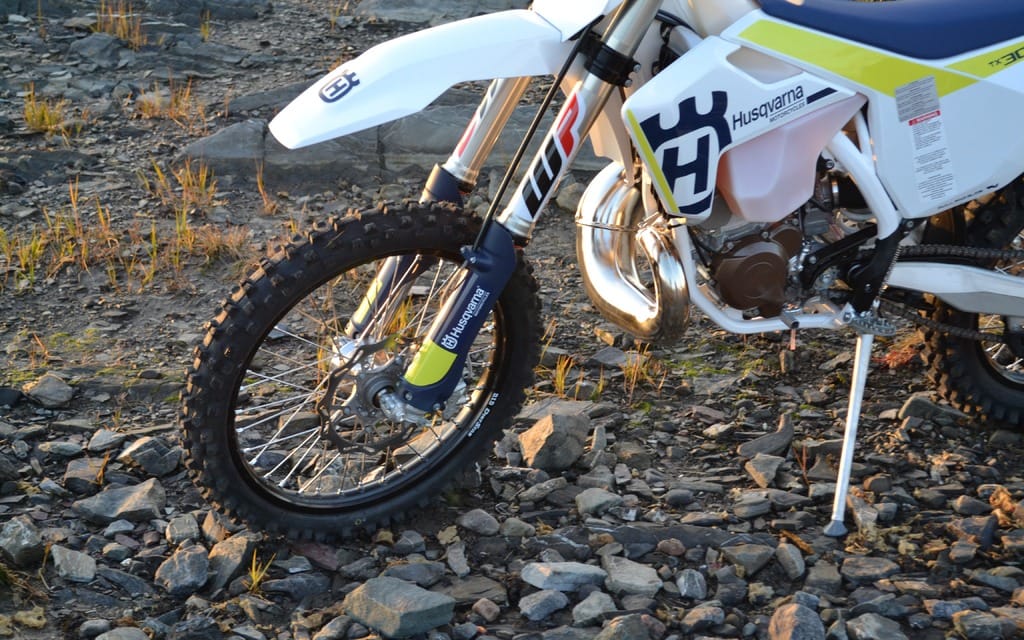 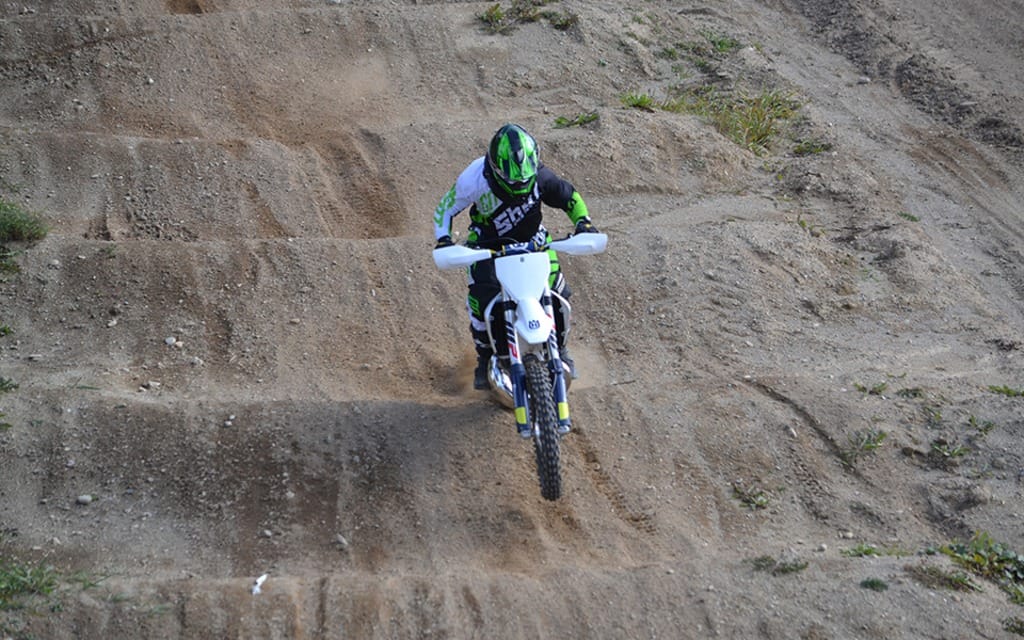 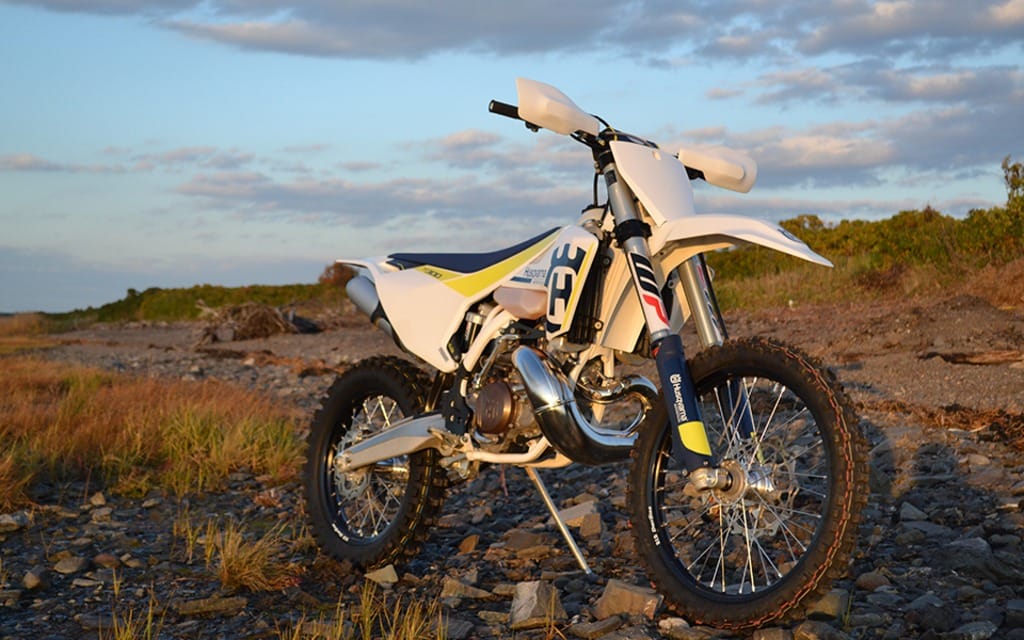 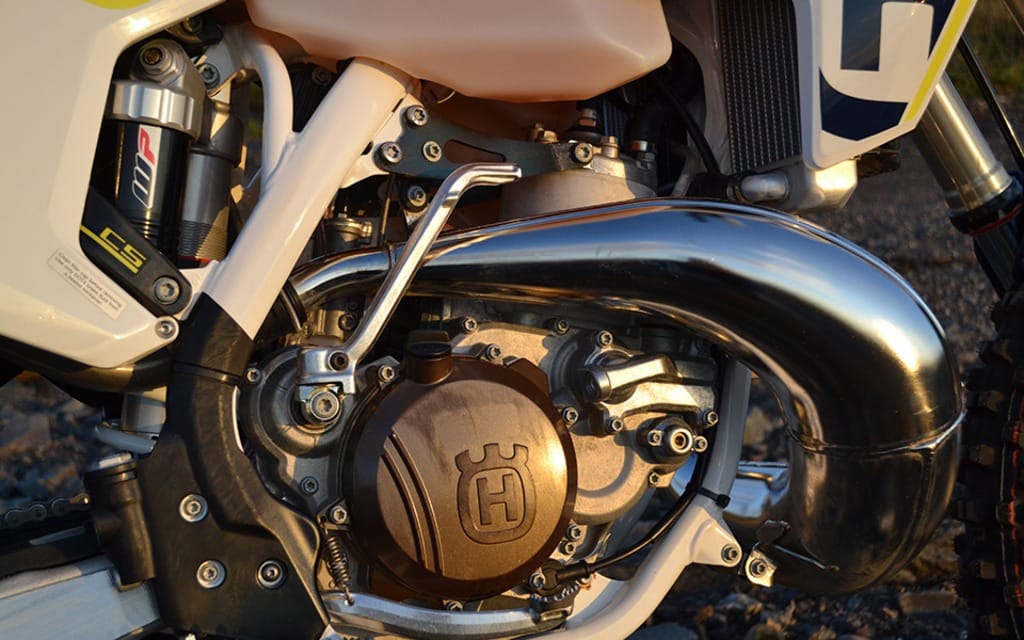 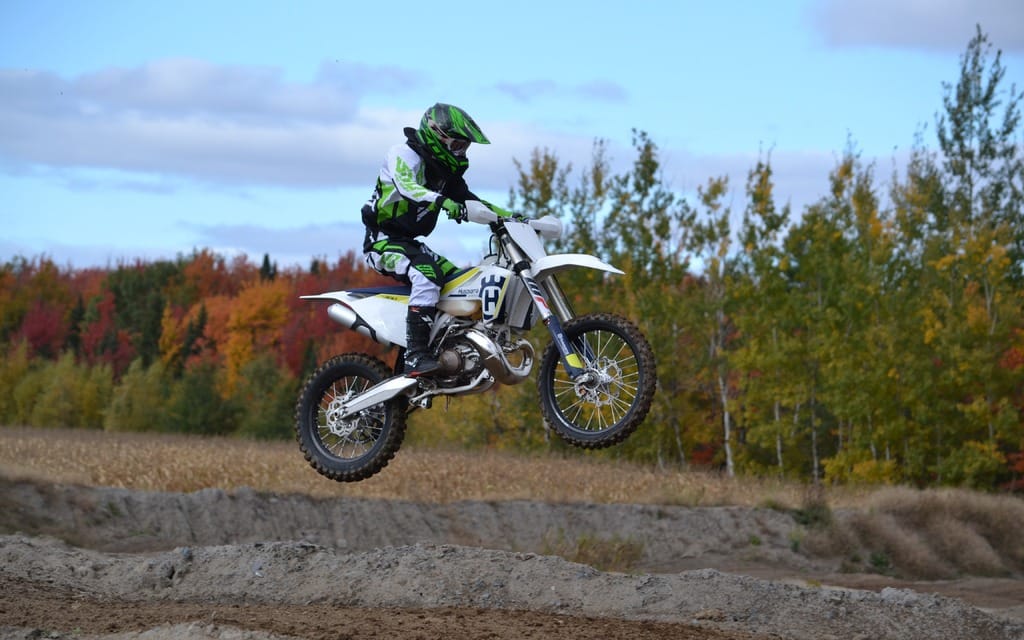 Husqvarna TX 300 a smooth and versatile mount
By Guy Caron

As I hit the whoops section I realize I’m going way slow. The Husqvarna TX 300 is begging me to grab a handful and gives me reassuring signals, clearly telling me that faster will be smoother. A two-stroke is a joy in the whoops, much easier to float across the field of sharp, hard-packed humps that are just a bit smaller than what would be called “jumps.” I have ridden four-strokes for so long I have forgotten that feeling. But I have not yet developed the confidence in this nice-handling, well-suspended package, which is way ahead of the 2000-era two-strokes I used to ride. So I open the gas some more for the next pass, but no, I don’t go all out. The Husky lets me know I’m a wuss.

The TX 300 is a cross-over model, not a full MX machine. It is a new niche in the Husqvarna catalogue, along with the four-stroke FX350 and FX450, aimed at the rider looking for a more versatile mount. A motocross track is all right for the TX and, with the 10-litre tank, six-speed transmission, electric starter, 18-inch rear wheel, side-stand and suspension settings that are biased toward cross-country racing, it is as much a woods weapon as a motocrosser. Pretty much what I need; I don’t spend all my weekends racing MX anymore, just the occasional practice day and some off-roading/trail riding thrown in every now and then. There are many of us in that corner of the market. The cross-country racer types will rejoice that it’s ready for them right out of the box, short of a skid plate.

The all-new engine is based on the TC250 powerplant with which the TX 300 also shares the new-generation chromoly steel frame matched to a composite carbon fibre sub-frame/airbox. It gets an electric starter motor, mounted under the cases, and a balancer shaft that makes it the smoothest two-stroke I’ve enjoyed. Should the lithium-ion battery go flat, the kickstarter will remind you of the good ol’ days. Fueling is handled by a 38 mm flat slide Mikuni TMX carburettor. A dual-option ignition map is controlled by a switch mounted on the tapered handlebar. If that’s not enough adjustability for you, the power-valve can be fine-tuned to get the exact power characteristics requested by your demanding ego. The Magura hydraulic clutch ensures a light pull to save on arm pump in tight going with no worry about adjustment.

The suspension duties are handled by WP. The new AER 48 mm front air fork is very light, about 1.6 kg less than comparable spring units. It separates the single air chamber, in the left leg, from the fully adjustable damping in the right, is easy to set up, and does not require constant fiddling. You won’t get a collapsed front end if you ever blow a fork seal, either. Those AER forks have changed my view about air forks for the better! The WP DCC rear shock works through conventional linkages.

Just pushing the Husqvarna into my van, I realized how light it is. At 100 kg with just a splash of fuel in the slim tank, it is not quite 10 kg lighter than my 450, but it sure makes a big difference; the bike feels smaller, too. At first it felt funny to use the electric starter on an easy-to-kickstart two-stroke, but after using it for an afternoon, I would not have it any other way. Call me lazy, I don’t care. I’ll use the magic button every time I get going or stall.

As you could guess from the opening lines, I went motocross riding with the Husqvarna TX 300. I was curious to see how well it would cope with big air. The first impression on a brand new, loamy track was that the 300 is flexible and responsive from the bottom and it feels nimble and light. The jetting was a bit off for the five-degree temperature; rich on top and with a slight hesitation from a closed throttle. Going down to a 420 main jet, from the stock 430, made the top-end come to life. That motor can be lugged but it can also sing on top and it pulls with authority across the whole rev range. No wild burst or hard-to-manage torque peak, just a potent forward thrust that keeps the rear Dunlop Geomax AT81 hooked up. I played a bit with the air screw, but with the good traction that day I did not spend too much time trying to get it perfect. I was pleasantly surprised that I could hit all the jumps, long tabletops and doubles, without any worries about the landing. The fork and shock would use all the stroke, a bit more than with an MX-only machine, but I had no harsh bottoming anywhere even if there were some tires marks in the fenders. By turning in the hand-operated compression adjuster on the AER fork I found a plush, compliant ride that would still cope with big hits. I had to back off the spring pre-load to near zero on the shock to get the sag to 105 mm for my 65 kg weight, but it also worked great, no kicking. And, of course, I could blitz the rolling jumps and whoops sections. I was faster than on my 450 but quite a bit short of what the bike felt capable of. The balanced feel of the chassis complements the good compliance of the WP suspenders so I could hit any line I wanted in corners, flat, bermed, or rutted. All good but I wanted to see what the TX 300 would do on less than perfect traction conditions.

I went to a hard-packed track with a watering system out of service, bone dry and dusty. There I wanted to soften the initial hit when cracking the throttle open. I could not get it perfect with just the air screw, going from slightly rich and hesitant to a tad lean off throttle, but with the ignition map on the smooth option, I could find a smooth enough setting. I learned when I dropped the bike back to Husqvarna Canada that an optional needle fixed that off-throttle response issue. Still with the smooth bottom-end power of the 300 I quickly got my head around finding the front-to-rear balance with the right grip to navigate the flat turns without pushing the front or spinning the rear too much. The supercross style obstacles of that track were dealt with easily, but I knew I could not over- or under-jump like a noob on the bigger obstacles. Not that I’d feel like doing that on a motocrosser but I know it would be a little bit less painful if that happened.

My off-road testing was nothing like I wanted it to be; heavy rains and/or snow made me wish I was living farther south but I still got a taste of the Husky in the woods. With just adjusting the damping, front and rear, the TX 300 was supple enough for a day dealing with rocks and roots covered with wet, somewhat frozen leaves. My riding buddy that day, Sylvain, had an easier time on his Husaberg 300 TE (an ancestor closely related to the Husqvarna) with his enduro-specific suspension set-up, especially so at the start of the ride before I opened the adjusters some more on both ends of my mount. A little less pressure in the fork would have helped some more but I did not have the small provided pump with me. The more my confidence grew, the better the TX 300 responded. First gear is low enough for tight going, the power down low tractable. In sixth it is plenty fast for open spaces. It is a closed-course race-ready bike and I must say that I was not up to the speed it can generate on that day, riding with a sore wrist. No fault of the bike, I’m making an excuse here. I just want to get that Husqvarna TX 300 again and put some more time on it!