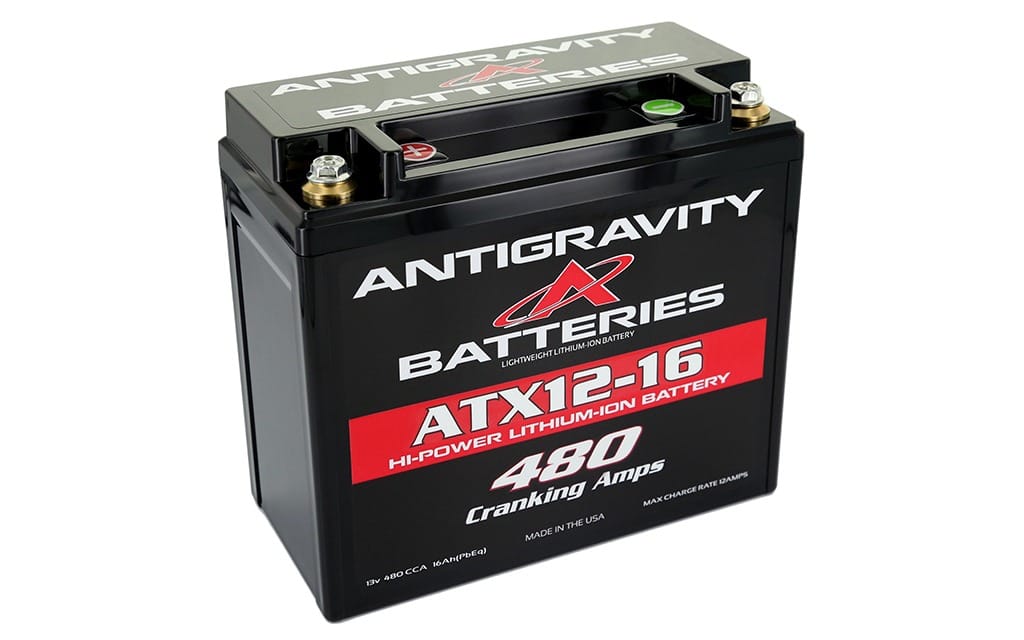 Crank it up: You can lose weight without exercising!

Lithium ion: Even if you’re not even remotely interested in batteries — and most of us aren’t — it’s all the news. Universally used to power electric cars, Li-on started appearing in motorcycle starter batteries a little more than five years ago, the attraction a claimed combination of lighter weight and higher cranking power. The question is — especially if you’ve Googled lithium-ion/cold weather/starting on various rider forums — do they live up to the hype.

For the claims would seem truly impressive. I ordered a YTX12-16 from Antigravity — mainly because it has roughly the same dimensions as the YTX14-BS Cycle-Tron II that has been powering my old V-Strom for the last three years — and according to the manufacturer, its 16 cells are capable of 480 cranking amps while weighing but 1.54 kilograms. Compare that with 200 cold cranking amps and 5.2 kilos that Interstate claims for the Cycle-Tron and it’s pretty hard not to be impressed.

And certainly the difference is immediately apparent. The old glass mat battery, as “advanced” as Interstate may claim, is heavy enough to serve as weightlifting equipment, its 11.5 pounds about what I use for “flys” when I am inclined to hit the gym. The Antigravity’s 3.4 pounds, on the other hand, wouldn’t challenge a four-year-old.

As for the YTX12-16’s ability to crank over my old DL, I’d have to say it delivered on that promise as well. Despite the blogosphere being rife with tales of Li-on batteries failing to crank at low temperatures, I had no such issues. First, I chilled the YTX12-16 to zero degrees C — at least that’s what the weatherman said the overnight low was — on my front step. It fired the old Strom right up. I tried the same thing at minus two and five with no detriment in performance. Only when I got to minus 10 did I notice any sluggishness and even then the big twin started on the second revolution (not the first as it always does).

Credit two mitigating factors for my success. First, look back at those original specifications. Note that Antigravity’s power is measured in cranking amps (CA) while the Cycle-Tron’s is rated in cold ranking amps (CCA). That seeming semantic difference can make a huge difference in real life. CA is a measure of how many amperes a battery can deliver at 0 degrees Celsius: Cold cranking amps uses the same methodology, but measured at 0 degrees Fahrenheit (-17.8 degrees C). The latter, as you can surmise, is a lot more taxing than the former.

So, instead of buying the smallest Antigravity possible with roughly the same cranking amps as my stock battery’s cold cranking amps (the impossibly tiny 822 gram YTZ7 claims 240 CA), the full-sized YTX12-16 offers plenty of reserve. One important aspect, then, to consider when shopping a Li-on battery: Many manufacturers claim what they call a Pb — the atomic symbol for lead — equivalency for both their amp-hour and CCA ratings (Shorai, for instance, boasts a 1.5X ratio for cold cranking amps compared to lead-acid batteries). The best advice I can give for guaranteeing adequate cold starting power is to ignore these claims.

Just as importantly, explains Scott Schafer, president of Antigravity Batteries, the problems some riders are having may be because “Lithium does have a little more resistance to starting in the cold. But unlike lead acid batteries, they regain power as they warm up.” According to Schafer, if it is indeed cold enough to render his Li-ons sluggish, stab the starter a couple of times to “warm” the battery (or just turn the key on and let the battery self-warm by powering the lights) and the Antigravity will perk right up.

That said, I’m not sure that my old Suzuki is a worthy recipient of such a high-tech battery. For one thing, while a replacement Cycle-Tron II might set me back a hundred bucks (less on sale), the YTX12-16 will set you back about $433.99 about as much as my old V-Strom is worth!

So, who should be shopping lithium-ion batteries? Well, the obvious answer is racers. Four hundred and change may be a lot to be spent on a 15-year-old adventure bike, but it’s still the cheapest way, short of jettisoning parts, to lose the better part of eight pounds. Customizers looking for the smallest possible battery so as not to disrupt their creation’s flowing lines will be well served as well. And if your bike takes more than a few spins before it wakes up — like, say, a cranky old carbureted superbike — lithium-ion promises much more perseverance than conventional batteries. I once torture tested a Li-on battery (not an Antigravity) and it would continuously crank over my over my reluctant old Honda CB1100 — with a big bore kit and a shaved head — about four times as long as a conventional battery. Schafer also claims that an Antigravity battery can be stored for up to 18 months — without parasitic draws such as anti-theft devices — and still start your bike, a major boon for a lazy old git like me.

So, while I can’t recommend that everyone rush out and buy a lithium-ion battery, I will counsel that, if you are willing to spend that much money on a battery, an Antigravity product would be my choice.