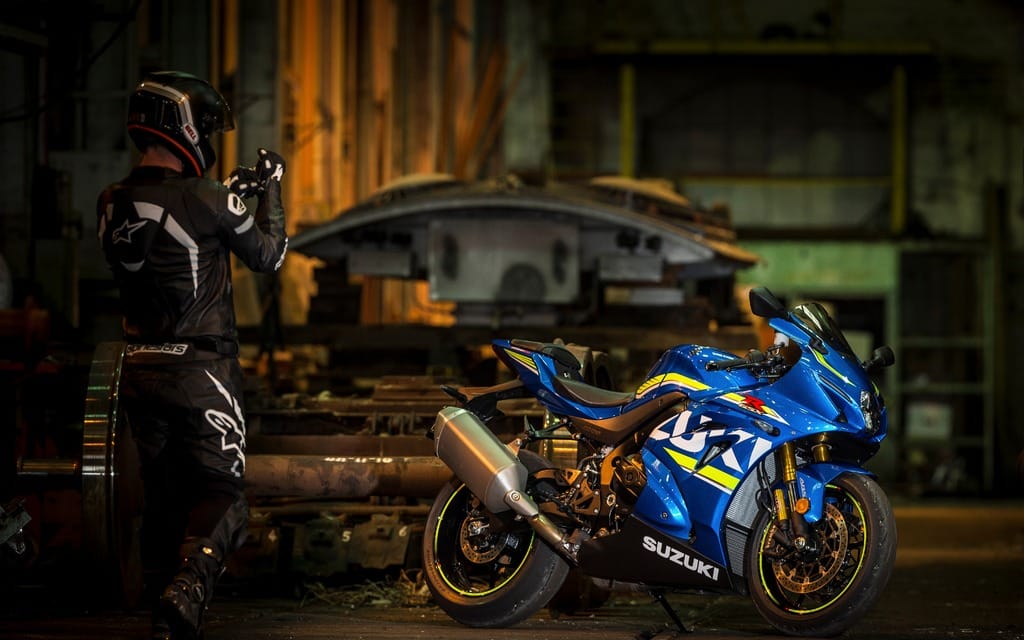 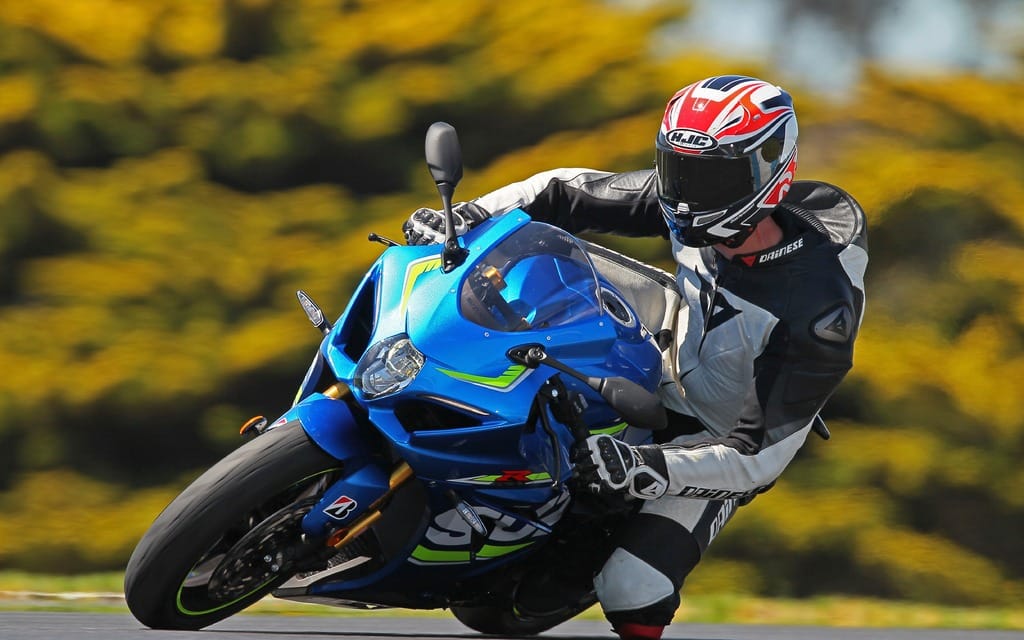 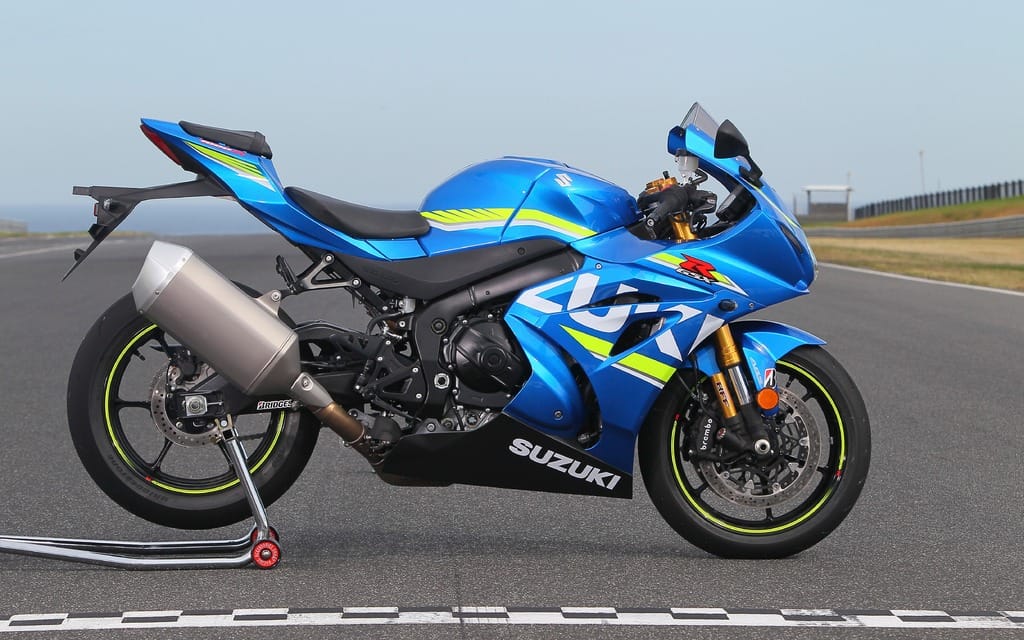 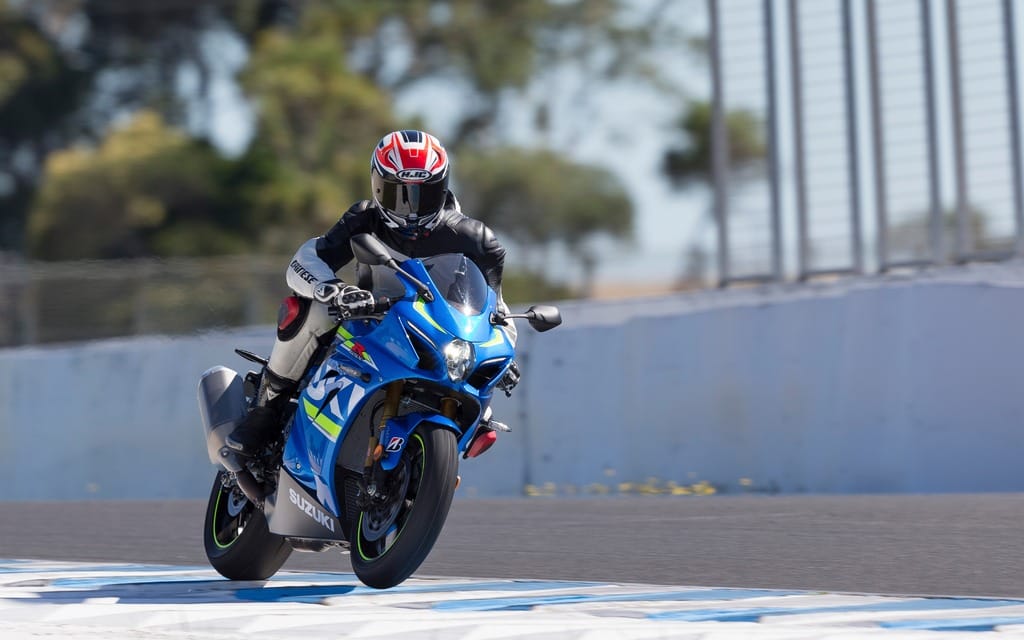 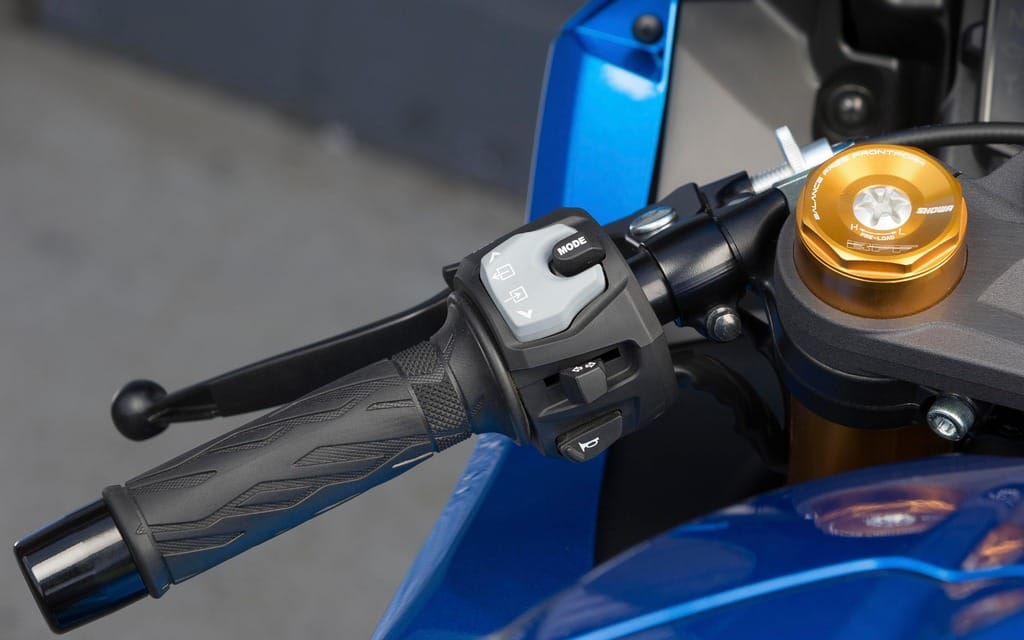 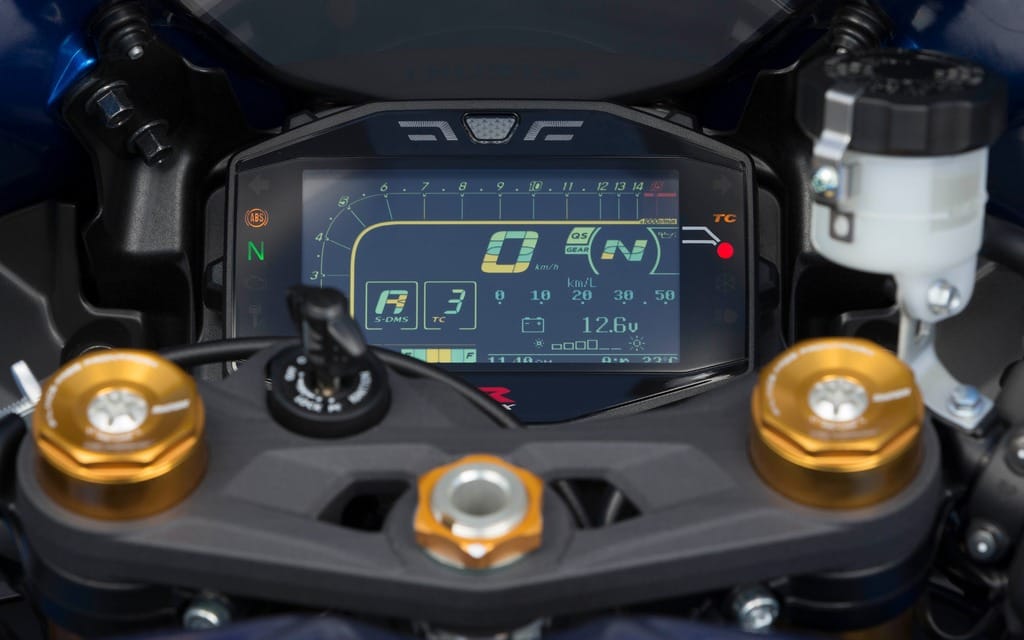 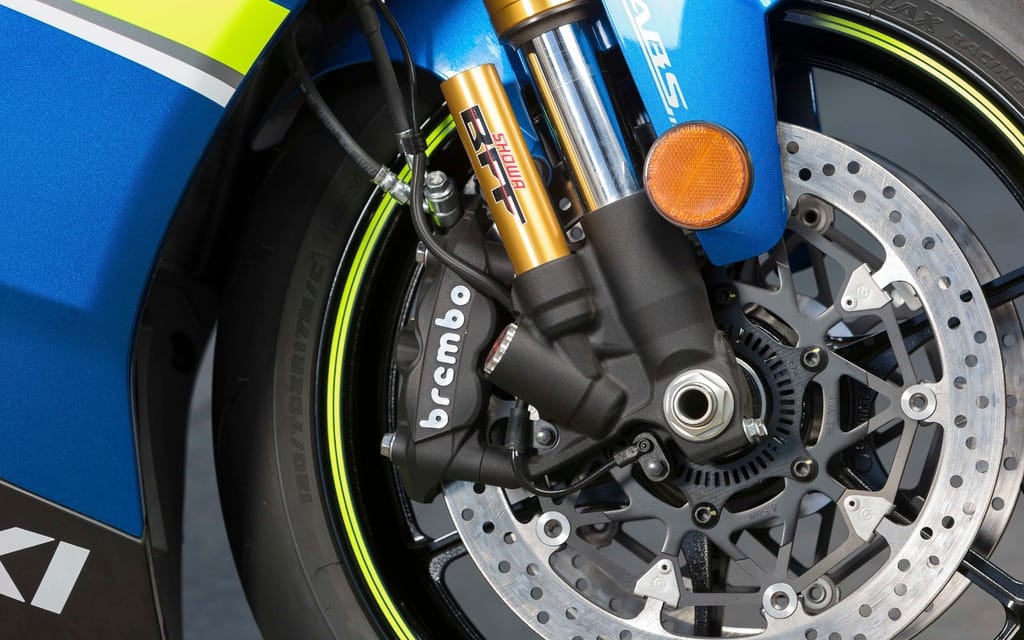 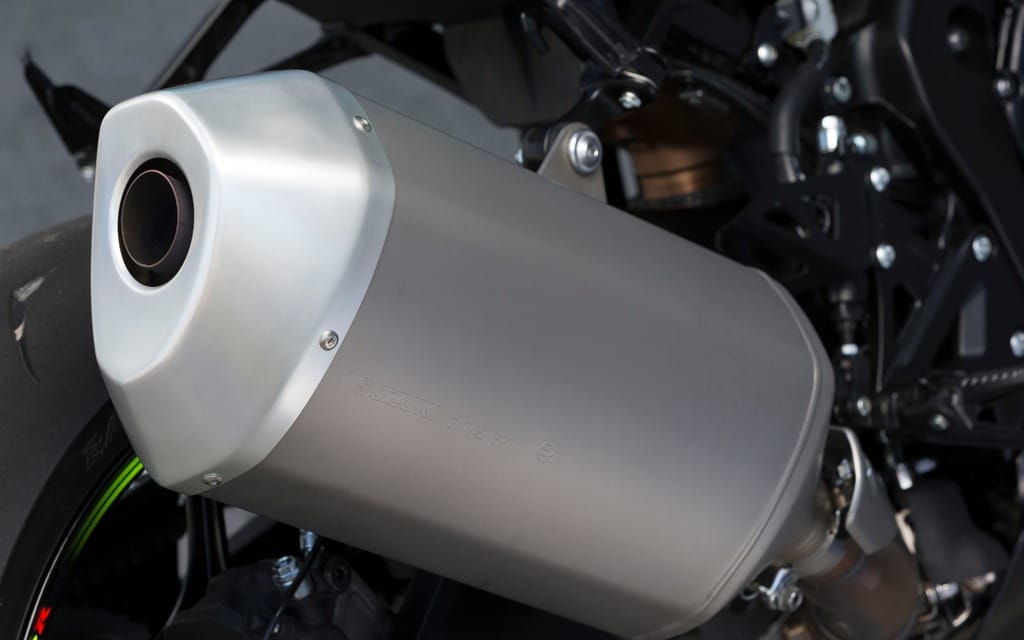 Suzuki focus is sharp on new superbike
Flat-out in top gear with my head behind its screen and the bright blue ocean up ahead, the GSX-R1000R is well into top gear and doing maybe 270 km/h when it flashes past the Phillip Island pit straight’s 200 metre marker and I sit up and squeeze the front brake lever. As the bike slows, a black GSX-R comes past on my right, its rider wearing a distinctive white, red and blue helmet, and leathers with a name in yellow letters on the back: Schwantz.

Through the next fourth-gear right-hander I’m right behind as the tall figure carves through the slightly bumpy Doohan Corner in that familiar sitting-up style — familiar, that is, from TV and photos rather than today’s eerily, temporarily, close proximity. By the time I touch the brake and tread down for the following Southern Loop left-hander the 1993 500 cc world champion has gained several metres, and he proceeds to pull steadily away while seemingly making no effort at all.

Yes, Kevin Schwantz has still got it. And so, following the long-awaited arrival of this essentially all-new model, has the GSX-R1000. Suzuki’s brightest star’s presence at Phillip Island reinforced the fact that this is the most significant revamp since the big GSX-R’s introduction in 2001. After a day thrashing the GSX-R1000R — the more upmarket of the two versions — around the Australian circuit, I’m not sure whether the Suzuki has regained its class-leading status of a decade ago. But there can’t be any doubt that it is right back in contention.

In reality that was always likely to be the case, once Suzuki released the GSX-R’s specifications along with vital statistics showing a maximum output of 199 hp — an increase of 17 hp — and a slightly reduced curb weight figure of just over 200 kg, along with the all-important addition of ride-by-wire throttle control plus an Inertial Measurement Unit with its associated potential for traction control, cornering ABS and other electronic trickery.

That extra horsepower comes from a new engine with shorter-stroke dimensions and some clever touches of its own, notably the MotoGP-inspired SR-VVT, or Suzuki Racing Variable Valve Timing. This equips the intake cam sprocket with a device containing a dozen steel balls, which are located in slanted grooves and move under centrifugal force at high revs to rotate the sprocket and retard the timing to boost top-end performance.

Other engine mods include higher compression ratio, new valve operating system (finger followers instead of bucket tappets), and removal of the balancer shaft. There’s a reworked SRAD ram-air system, with larger ducts allowed by the slimmer LED headlight; and a new intake system with innovative two-part velocity stacks for the outer two cylinders.

The new exhaust features Suzuki Exhaust Tuning-Alpha: rev-dependent valves in the pipes connecting downpipes of cylinders one and four, and two and three. Both models also get 10-way adjustable traction control plus three riding modes, all giving full power with different rates of throttle response. The GSX-R1000R also comes with the two-way quick-shifter that is an accessory for the standard model.

From the fairly tall saddle the view was of a new LCD display, clip-on bars and a cut-away top triple clamp holding broad, gold-coloured Showa fork-tops. The engine fired up with a single jab at the starter button, and the bike pulled away easily with the help of Suzuki’s Low RPM Assist, which adds revs if necessary as you let out the clutch, whose action is light due to the new Suzuki Clutch Assist System.

The sharpest engine mode was fine for track use, in conjunction with an engine that pulled cleanly from low down, felt respectably strong through the midrange, then kicked harder at the top end as that variable valve device did its stuff, revving urgently toward the 14,500 rpm limit while I snicked through a deliciously smooth box that didn’t miss a change in either direction all day.

There was a nice raspy exhaust note to the engine too, and a slightly raw feel that gave a touch of old-school GSX-R character and didn’t seem at all rough to me although one rider commented on increased vibration. The traction control seemed to work efficiently, although I kept it turned down to level two and was never quite sure when it was cutting in as the standard-fitment rear Bridgestone got a bit hot and bothered in the Australian sunshine, and started sliding around under acceleration during the second session.

By that time I was seriously impressed by the chassis, which like the engine keeps a similar format but is essentially all new, based on a frame whose aluminum main spars are now pressings, in MotoGP fashion, with cut-down side supports. The frame is 20 mm narrower and 10 percent lighter as a result, and holds the engine six degrees more steeply, which allows it to be closer to the front wheel, moving the centre of gravity forward to aid front-end feel.

It’s excellent kit, and contributed to the GSX-R’s impressively precise and stable handling. I opted to try Suzuki’s stiffer-than-standard track settings straight away, and immediately found the bike easy to turn and very controllable. It was even better with half a turn more preload on the shock, to suit my bigger-than-average body, and better still after lunch with the extra grip of Bridgestone’s R10 race tires.

I could come barrelling around the flat-out-in-fourth kink called Hayshed, the Suzuki needing a bit of force on the bars but remaining stable through the slightly bumpy right-hander, then stand it up and touch the brake lever before flicking left and treading down a gear for the climb up Lukey Heights. Here the track veers left, its surface streaked with rubber marks and its edge sometimes worryingly populated by large geese with suicidal tendencies. The Suzuki remained superbly controllable as it carved into the steep uphill turn, over the brow and down again, braking hard for the tight right-hand Turn 10 at the bottom.

Then it was flick up a gear, climb back across the bike and tip into the next left-hander, with the GSX-R’s fairly roomy size helping to make it notably agile with my tall six-foot-four body on board. Its fairing is slightly narrower but the tank is lower, giving more space to crouch behind the screen. More importantly the seat-to-footrest distance seemed relatively generous, so I hardly ever experienced the familiar struggle to get boots set on the pegs in time for a fast-approaching bend, or to hook another gear while exiting a turn.

For track use I have a feeling that the GSX-R’s roominess might be as crucial to my enjoyment and pace as its power and weight figures, though shorter riders might have a very different take. The leg room would also be welcome on the road, though there you’d be more likely to appreciate the Low RPM Assist function, or the light-action slip-assist clutch.

You can’t accuse Suzuki of lack of effort with this bike, that’s for sure. It’s been a long time coming but they’ve given it their best shot, from the innovative Variable Valve Timing to details like the more aerodynamic mirrors and flat-topped fairing mount bolts, and the front brake lever with its racebike-like slot to prevent high-speed activation by the wind. Maybe the styling remains a bit familiar and uninspiring (though personally I love the MotoGP replica blue), but that seems to matter less when the bike itself is so dramatically improved.

Whether the GSX-R1000R ends up being quicker than its rivals in motorcycling’s 200 hp club remains to be seen, but it surely won’t be far off and should make a fine road bike too. Equally importantly, it comes with that distinctive family character very much in place, and with a price tag that looks as competitive as its performance.

One R or Two?
The launch bikes were all the higher specification GSX-R1000R, which costs roughly 20 per cent more than the standard GSX-R1000 in most markets. The two models share the same engine and frame, the biggest difference between them being suspension. In place of the R-bike’s Balance Free Fork and shock the standard model gets Showa’s Big Piston Fork and a slightly heavier and less sophisticated though still multi-adjustable shock from the same firm.

The GSX-R1000R also has LED position lights above its fairing’s air intakes, a lighter top triple clamp, lightweight lithium-ion battery, and a launch control function that allows efficient racetrack starts with the throttle held open. More usefully, it incorporates the quick-shifter that is an accessory with the standard model. Both models come in the launch bikes’ racing blue, with the R also available in gloss black, and the standard bike in red or matt black. The GSX-R1000 was due in most markets in March, with the R-model following in May.