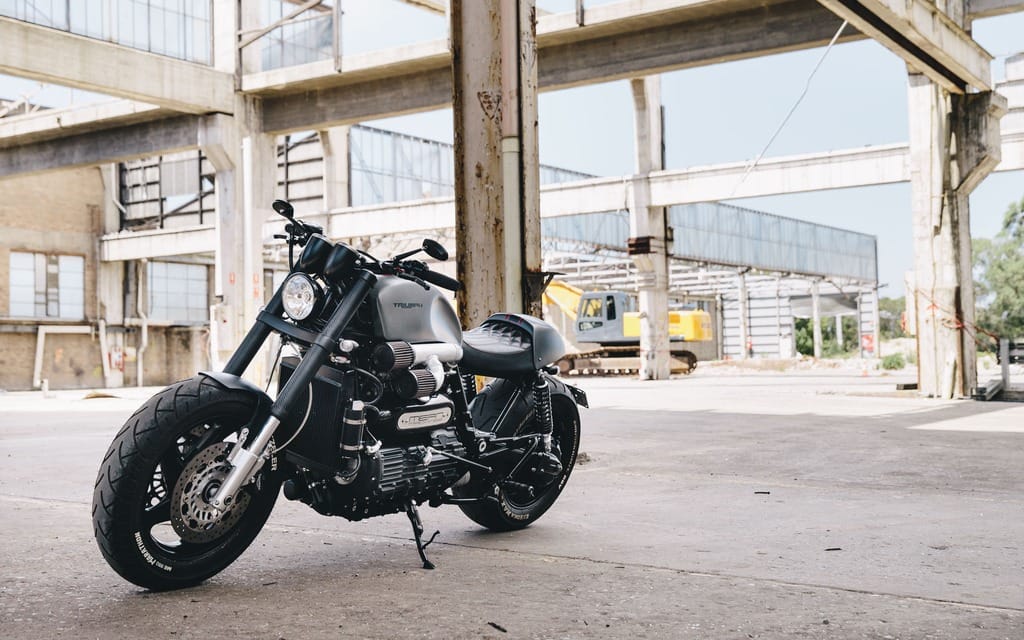 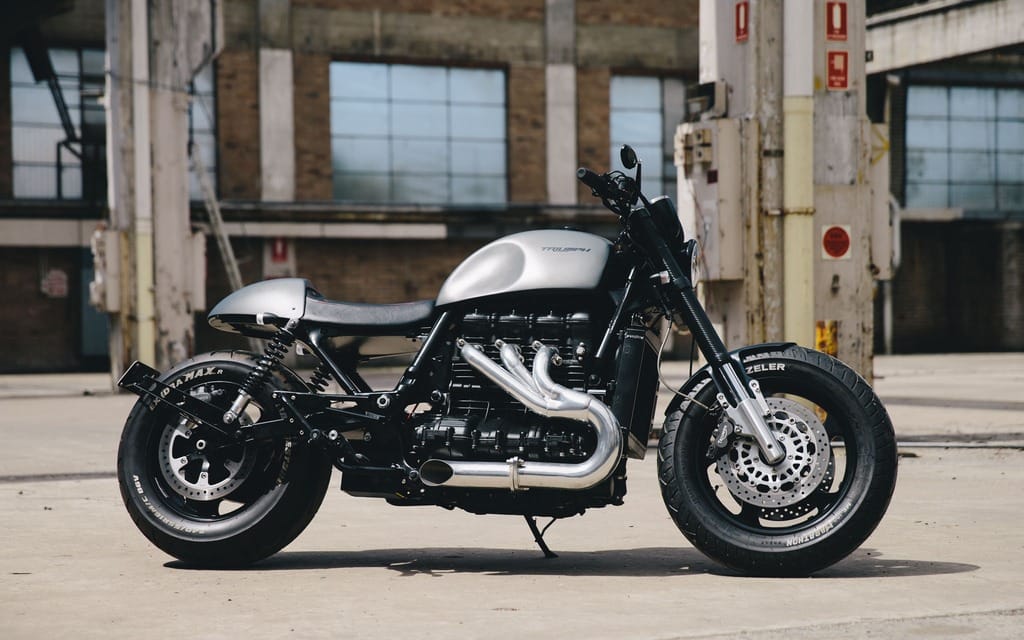 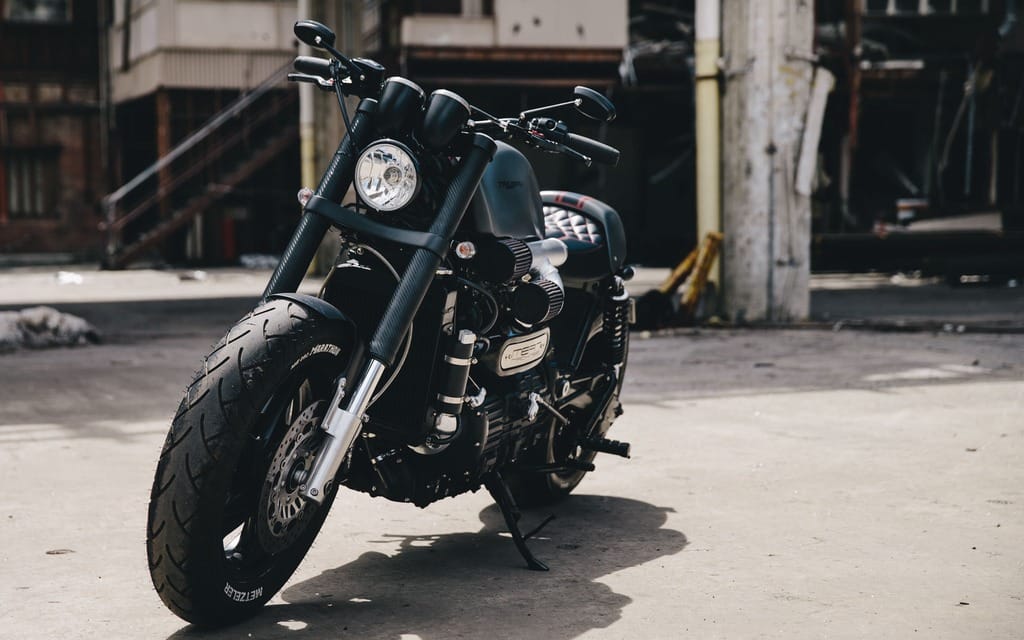 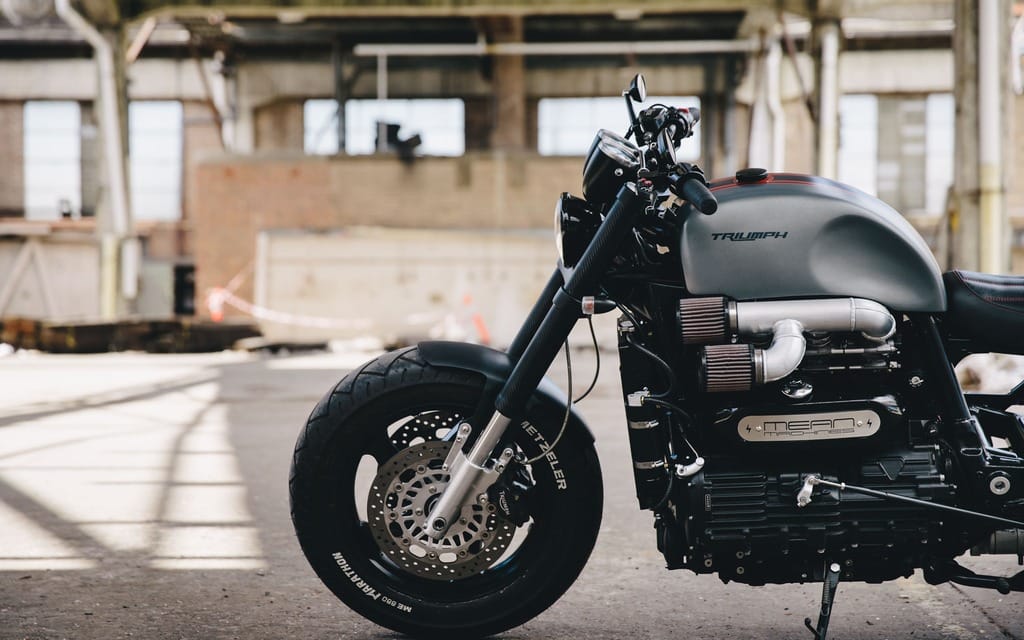 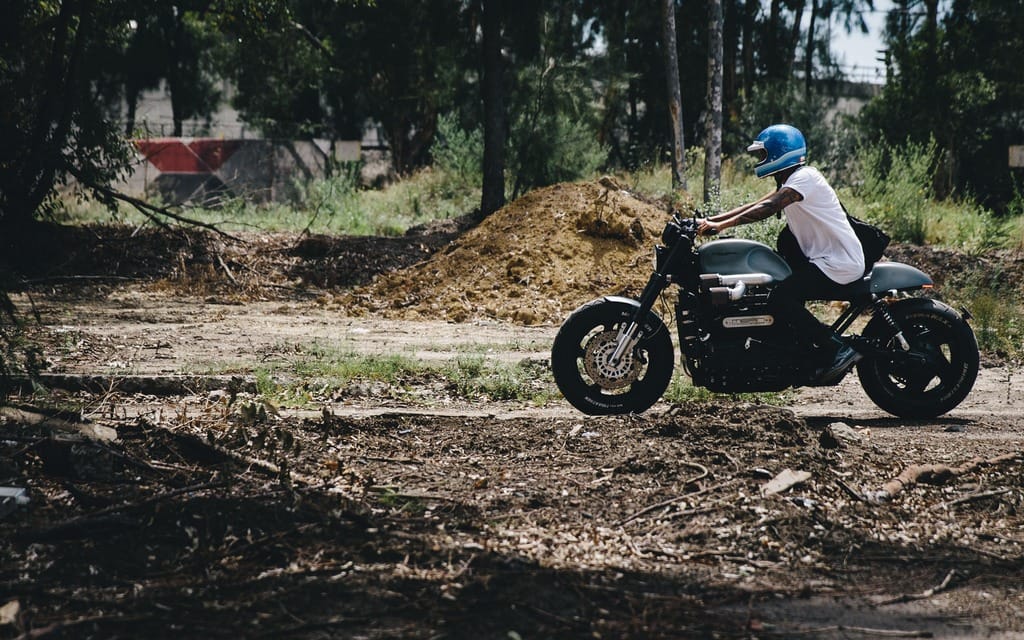 Café racers look cool but can be under-powered. No worries about that with this Triumph from Sydney
By Marlon Slack, Pipeburn.com

The morbidly obese and slightly long-in-the-tooth Triumph Rocket III has been a favourite of the morbidly obese, slightly long-in-the-tooth riding sect for the last 13 years. While it’s a cruiser, many owners don’t really bother going down the custom route for their rides. Modified examples of the 2300 cc beast usually just feature a pallet’s worth of matte black paint and around 400 yards of exhaust wrap. But now Sydney-based builder Wenley Andrews has worked his cafe racer magic on a 2006 Rocket III and given it the looks to match the gigantic torquey engine underneath.

I said the Rocket is morbidly obese. Maybe I’m exaggerating, but in stock trim the bike weighs 350 kg ringing wet. But all that heft and road-going presence was part of the appeal for head workshop provocateur Wenley. He’d had his eye out for one for a while. “I’ve always wanted to build a Rocket III,” he says, “It has loads of power and it’s just really beefy. Little did I know the power is outright ridiculous!”

Having ridden one, I can confirm he’s right. Despite being the absolute antithesis of what I find appealing in most motorcycles there is something charming about that fat triple powerplant. Charming in a medieval, roaring, arm-ripping kind of way. But there’s no getting around the size and weight of the thing. So the first thing that Mean Machines looked to do was shave some of that excess physical and visual weight off the bike.

The culprit for the latter sat right on top of the frame. “The main obstacle was the tank,” Wenley says. “It is just so huge and doesn’t look right, so I had a custom tank made to fit the purpose. It’s full metal with the stock fuel pump fitted underneath.” That one part goes a long way toward reducing the lines of the bulbous standard bike.

Before the fresh tank was sent off for paint a new air intake had to be made to get the airbox sitting neatly alongside it. The team wanted to get the fit nice and tight. A twin intake was fabbed up in-house, sucking in from two K&N pods. Off went the tank to be painted and all eyes turned to the bike’s fat rear end.

Wenley decided to use a spare seat from a Triumph Thruxton on the rear but fitting it proved to be a little bit tricky, so he and the team threw the baby out with the bathwater and made up a whole new subframe to fit. The seat itself was recovered by Andrew from Beyond Trims with some threaded red highlights.

With such a slab-sided hulking mass of an engine, a kickass exhaust was needed. All went well, at first. “I drew up an exhaust on a piece of paper and handed it over to my mate Billy who welded the exhaust for me,” Wenley says. “Then it was sent for black ceramic coating.” And here’s where things went wrong. With the bike already having more black on it than a Gothic Christmas party, the exhaust didn’t stand out enough. “I looked at the bike and it was too much black. So it went back to be finished in silver.”

Finishing touches come in the way of a slimmer alloy radiator and chunkier front and rear rubber mounted to blacked-out standard rims. The front of the Rocket was tidied up with a 5.5 inch headlight, set of mini indicators, custom mirrors and Biltwell grips. To make the stance more aggressive, Ikon supplied some longer rear shocks, giving the bike a slight nose down bias.