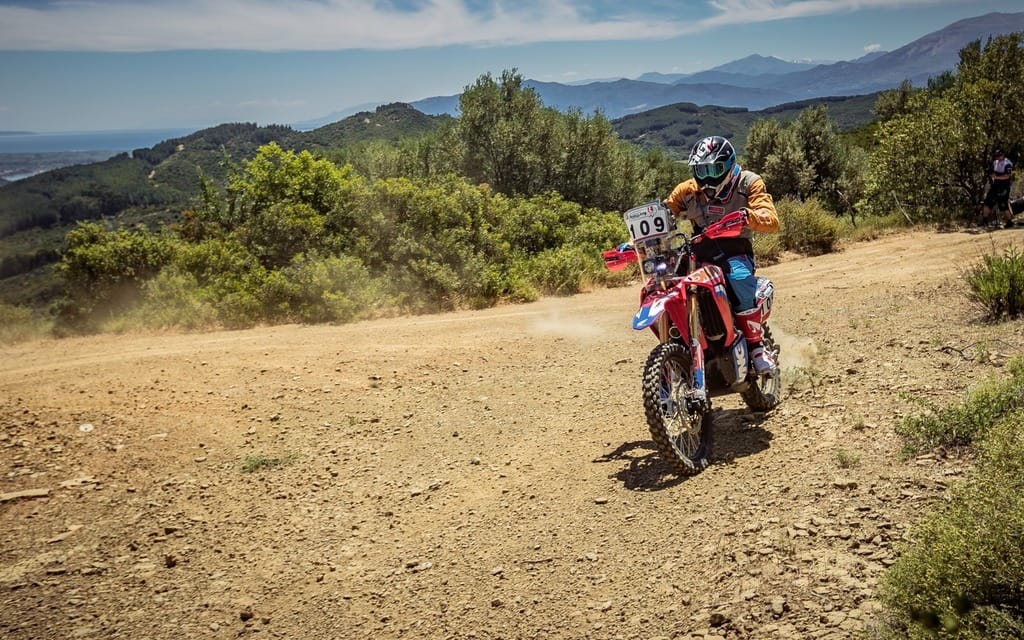 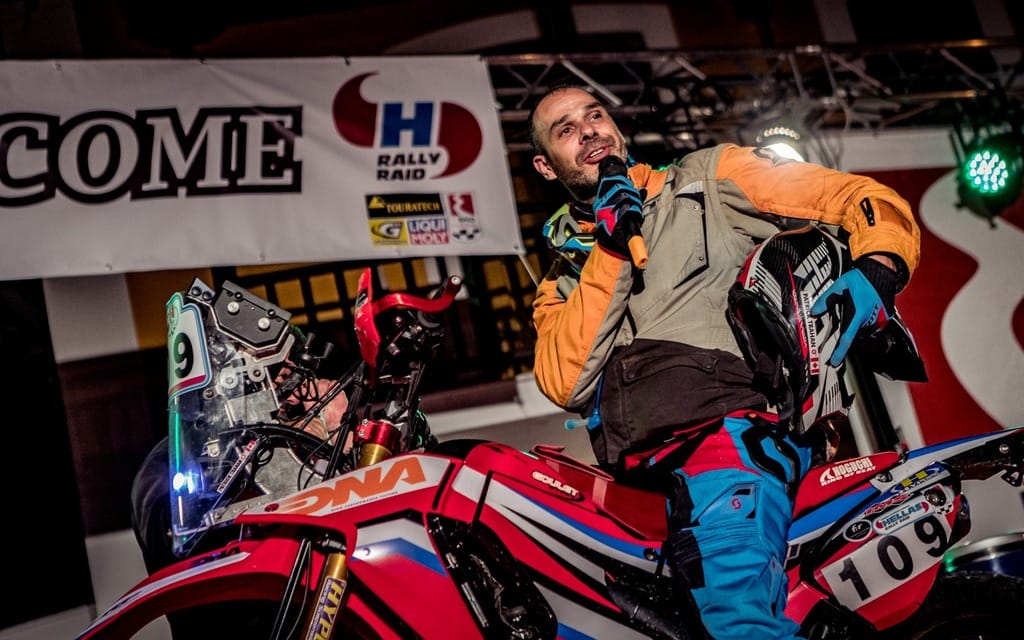 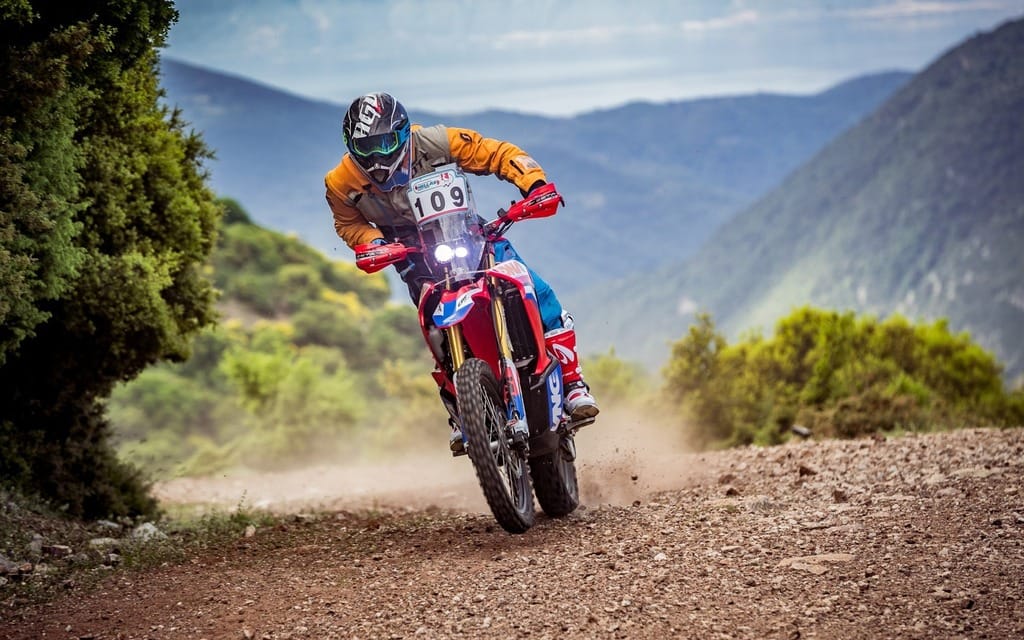 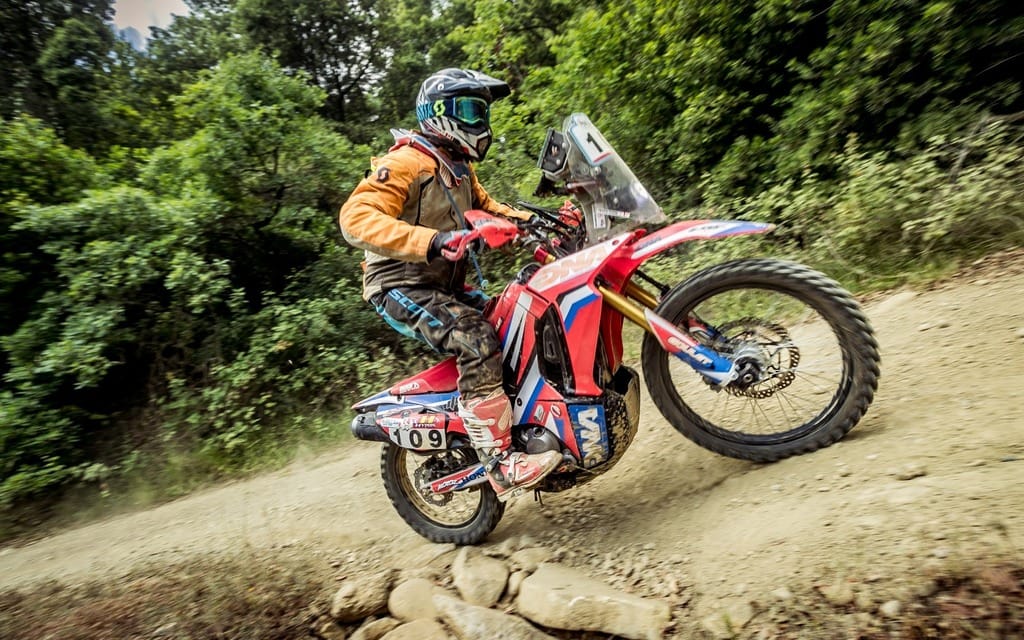 The Canadian rally rider Patrick Trahan raced and finished with the Honda CRF250 Rally at the Hellas and Albania rallies
Rally raid rider Patrick Trahan accepted a challenge of racing two rallies in a row just one week apart, the Hellas Rally in Greece and the Albania Rally, with his trusty Honda CRF250L. It was more than 4,000 km of racing that the little Honda would have to endure, its biggest test so far. At the end, it was the brand new CRF250 Rally that would be appointed to do the task and prove that “Rally” is not only a name on its plastic but something it can do!

“The decision to race with a CRF250 Rally was done last minute. I was not prepared for this because I had only raced on the CRF250L before and all the equipment was designed for the CRF250L. So we had about four days to build a rally racing bike out of a completely stock CRF250 Rally. With the help of Dino from DNA Filters, we managed to do just that. I was very happy about the results. Hyperpro suspensions built a race shock in two days to help for the race, which made everything possible. But other than the suspension and the tower and other little reinforcements, the bike was bone stock,” said Trahan.

The first rally was held in Greece the week of May 21 to 28.

The Hellas Rally: 175 riders from all over the world. Some of the best rally riders of the planet were present. It represented close to 2,000 km in seven days of racing in the mountains of Nafkaptos. Trahan finished fifth in the 250 category out of 15 riders and 70th in the general.

“I am very happy about the results and also how the bike performed. We had a problem the first two days with my nav tower but fixed it and I damaged the rear brake during a small crash, which meant racing without a rear brake for two days. But with the help of Vasilis Boudros from Greece Enduro we fixed it. I passed many fast riders during the rally and the bike was solid as a rock. I really think the CRF250 Rally has a real rally possibility. It’s more than just the name,” said Trahan after the Hellas rally

The second rally was held in Albania the week of June 3–11.

The Albania rally is a very tough rally because of the roughness of the terrain. Seventy-five riders from 15 countries were represented. Very fast enduro specialized riders were there. After one day only to prepare and adjust a few things on the CRF250 Rally it was off for war again. Trahan managed to finish 10th in the big class of the 450, 22nd overall and one top 15 and a superb seventh place on the last stage which was at less than one minute from the podium.

“After the Hellas rally I was already tired but motivated to go on another rally. It felt a bit like Dakar to do so many rally kilometres in so little time. I had some fear about the bike. Normally after a rally like Hellas, the bike has to be rebuilt. We worked on a bike for one day to build a bracket and fix the tower. Everyone told me that the Albania rally is very tough on the bike and the riders, so I had some apprehension. It was, in fact, very tough, many bikes and riders did not make it until the end. But me and my CRF250 Rally made it to the finish with zero problem on the bike other than changing bearings, brake pads, and a clutch wire, all normal stuff. Plus the bike performed very well to be on the front row of very experienced enduro riders with well-prepared 450 and 500 machines. My happiest moment was on the last stage when I pushed the CRF250 Rally and I got very close to be on the podium on the last stage where I made two navigation mistakes and got stuck in the river but managed to finish seventh overall a few seconds from the podium. I think that the riders looked at the CRF250 Rally in another way and gave it a lot more respect. Thank you to all my sponsors and most specially to Honda Greece for allowing me to race on this amazing CRF250 Rally.”