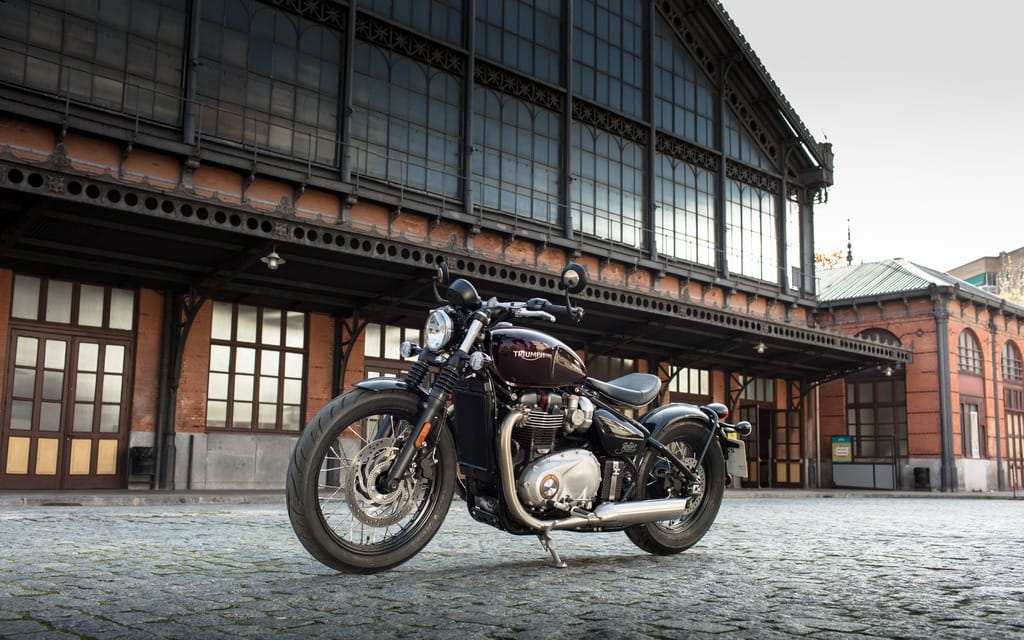 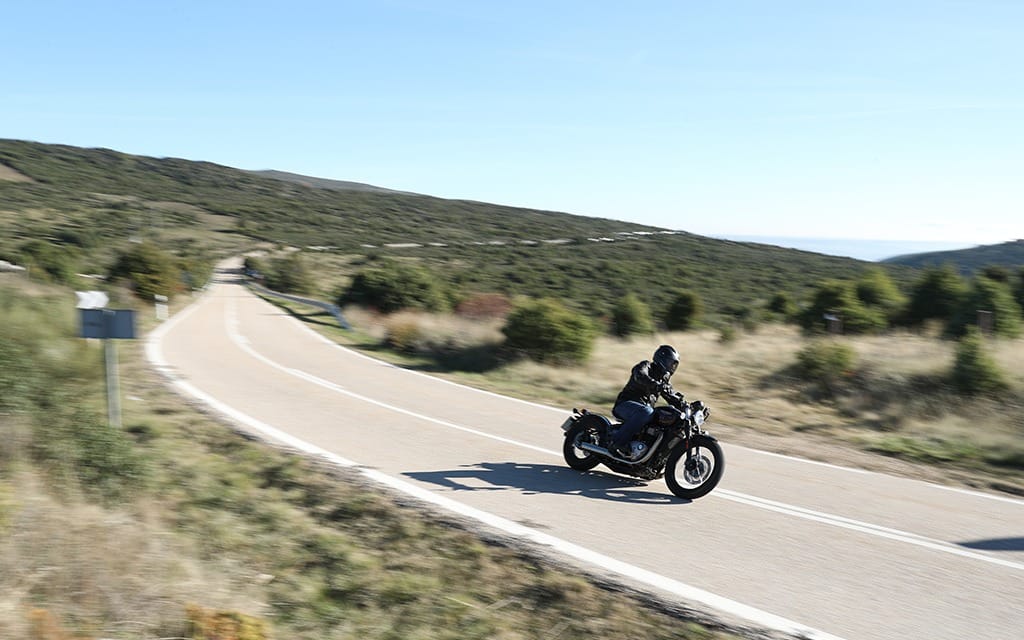 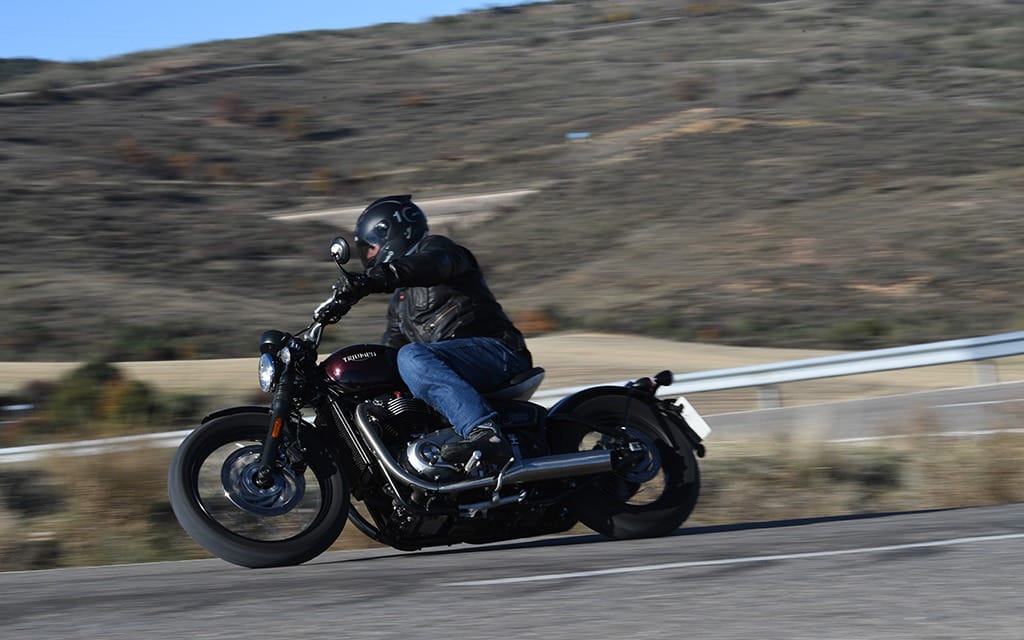 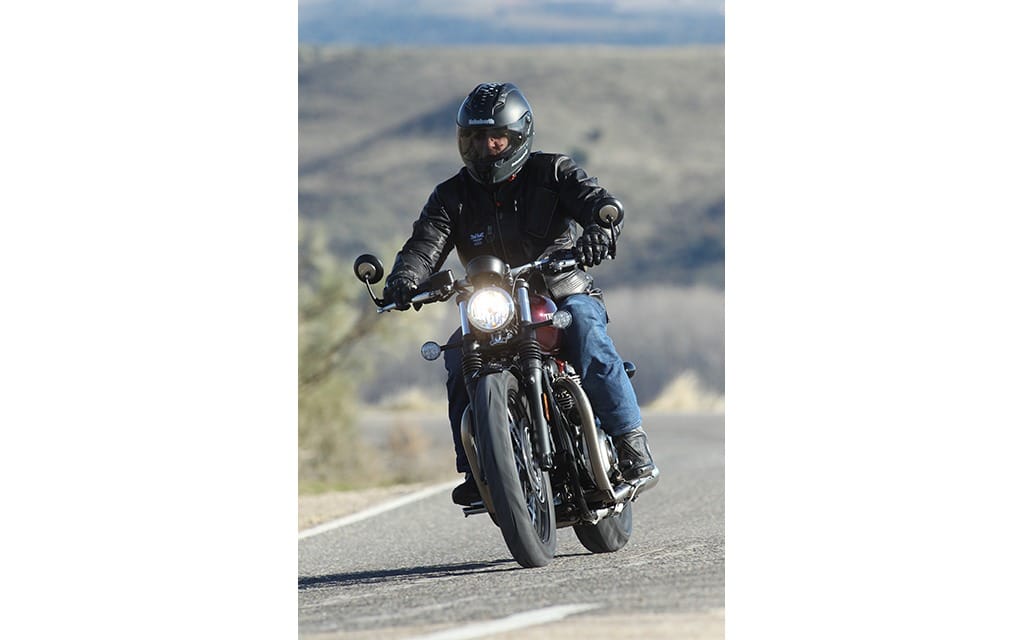 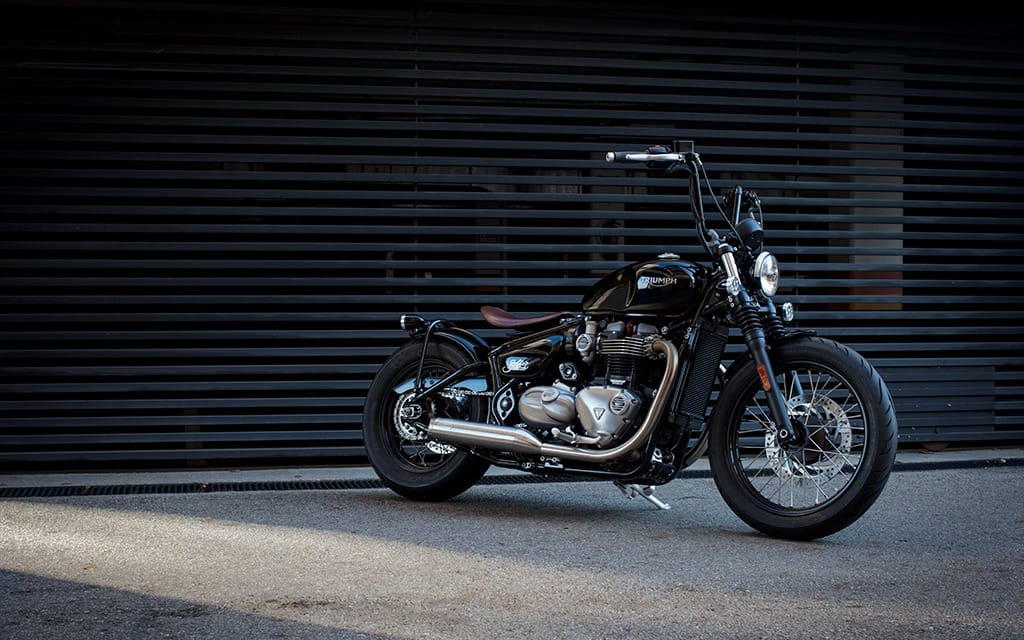 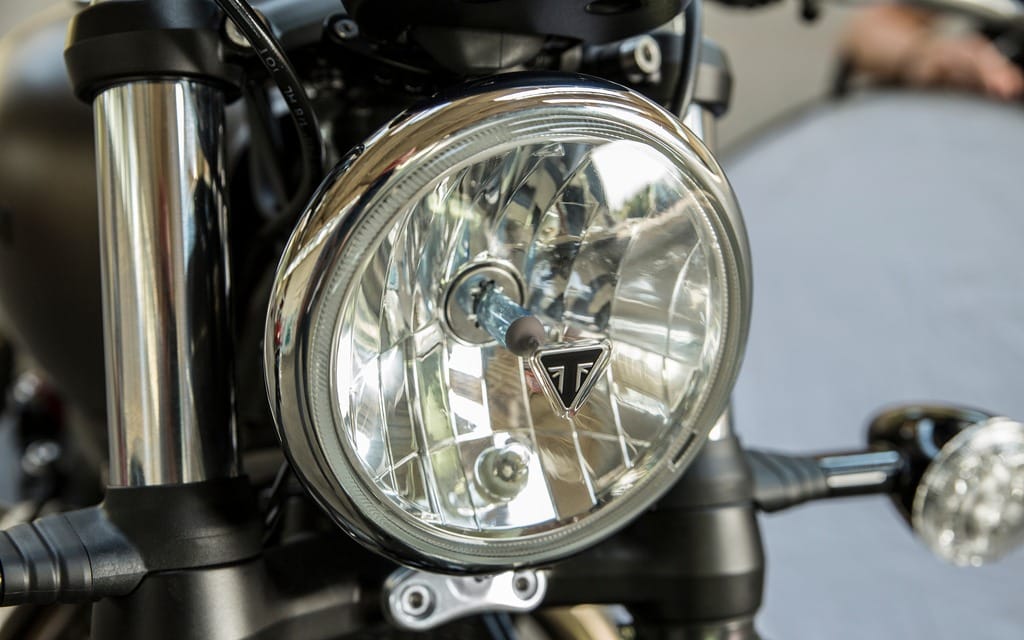 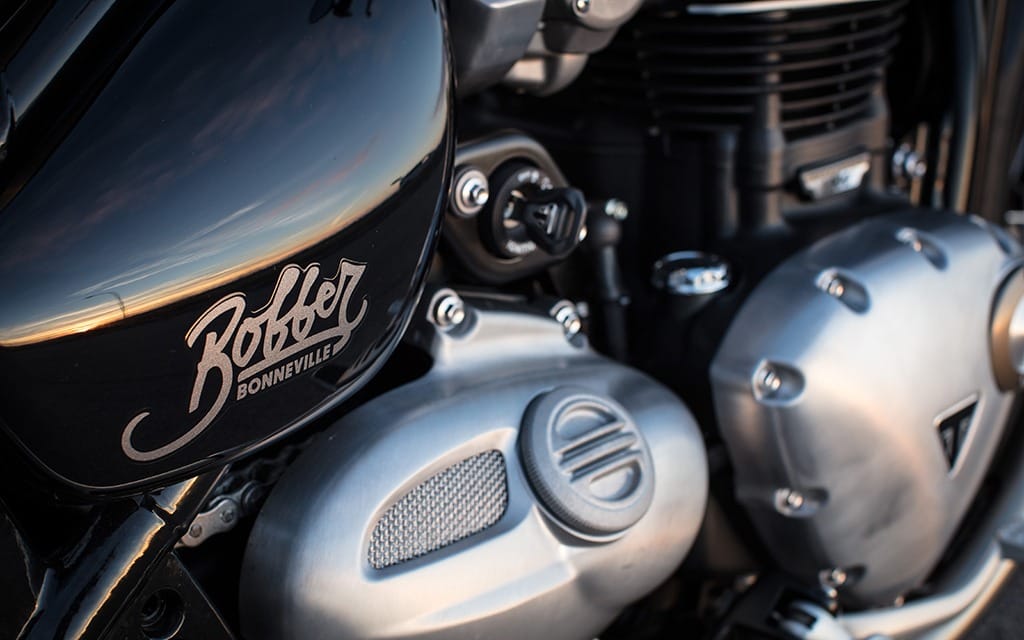 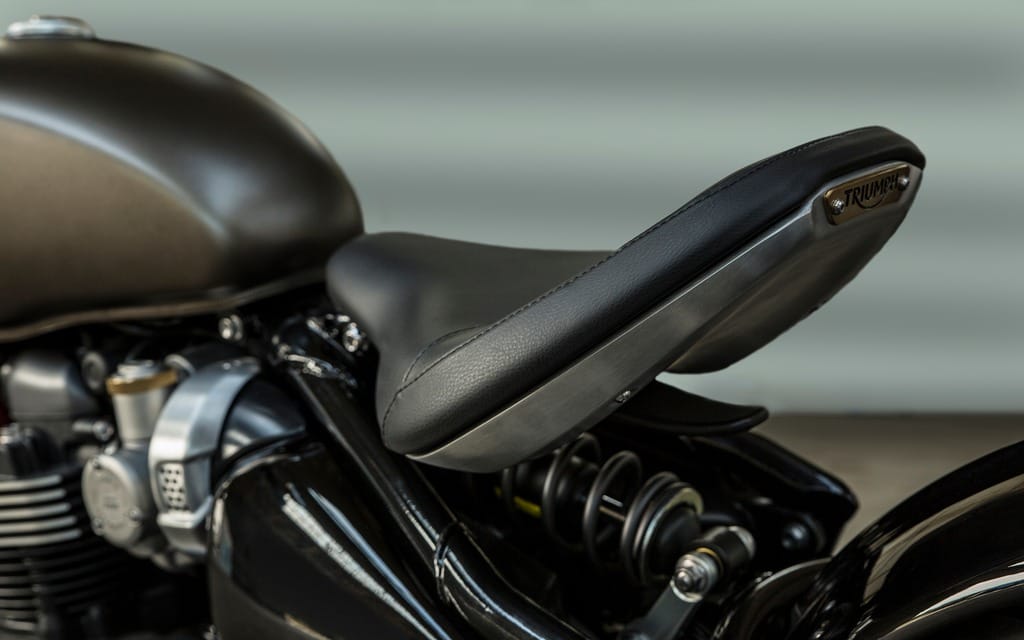 Old style Britbike looks good and runs better
It is with some trepidation, great shame even, that I admit to preferring Triumph’s new Bobber served up with an order of accessory ape hanger. I’m sure you’re already thinking it’s bad enough that cruisers exist, why are we celebrating their most polar extremes in a “real” motorcycle magazine? “Motorcyclists” are supposed to barely tolerate cruisers, let alone one with a handlebar that looks like a refugee from a bad biker flick. If we purists are to ride cruisers, we are to choose something — say a Ducati Diavel or, in a pinch, a Suzuki M109R — that not only emulates a sportbike in its performance but relies on technology directly derived from true blue superbikes. Then, and only then, might we be allowed to tolerate a cruiser.

And yet I find myself inexplicably drawn to Triumph’s new Bonneville Bobber, most especially when it’s adorned with Triumph’s accessory ape hangers. I mean, if one is going to admit to being a slave to fashion, one might as well go whole hog, n’est-ce pas?. No, a riding position that would do Peter Fonda proud doesn’t help the handling any. Yes, splaying yourself out like Jesus on the cross is about as comfortable as trying to maintain a chin-up in a 100 m/h gale. But my God, does it look cool!

I’m not alone in this assessment. According to Triumph insiders, when the resurgent British manufacturer originally displayed its latest custom cruiser with the outrageous handlebar, they were just funnin’ — showing what their latest masterpiece might look like when the extreme edge of the customizing crowd got their hands on the Bobber.

Public reaction, however, overwhelmed their conservatism. So the ape-ish bars — along with some 150 other aftermarket accessories — will be available as soon as the bike is launched. Oh, and just so all you nose-in-the-air sportbikers don’t immediately dismiss the Bobber, Triumph’s accessory catalogue also includes some extremely low clip-ons (though they are possibly even more impractical than the ape hangers because of the Bobber’s (semi) feet-forward footpeg positioning).

For those offended by either extreme, the Bobber doesn’t actually need either embellishment to be motorcycling’s fashion statement du jour. Even the bare bones, monochromatic Jet Black Bobber — an extremely reasonable $13,700 says Triumph Canada — is the hottest two-wheeler of 2017.

And those looking for that single individual feature that is responsible for the Bobber’s “rightness” will search in vain. As much as Triumph makes much of its new “swing cage” rear suspension, it’s hardly the reason for the Bobber’s retro bona fides; Honda’s VLX also emulated the hardtails of poseurs past and it was hardly trendsetting. “Peanut” gas tanks, fork gaiters and even single, “suspended” seats are hardly unique (Harley’s Rocker comes to mind for this last and it was a dismal failure). Ditto for the chrome-strapped battery box, the rear “drum brake” hub and the ignition barrel located in the right-side panel.

And yet the Bobber succeeds were so many have failed. Indeed, while the rest of the motorcycle industry still struggles to emulate Harley-Davidson’s recreations of yesteryear, Triumph, in one fell stroke, sees Milwaukee’s Forty-Eight and ups the ante with a bigger, better, more beguiling retro cruiser. You may not like customs, but you’ve got to admit that the Bobber is beautiful.

Apart from the homage to post-war bobber — whose etymology finds its roots in bob job as in to “bob” or remove extraneous things like fenders and side panels in a quest for lighter weight — Harleys and the Triumph share little in common. For one thing, while the Harley makes do with a rather archaic overhead valve V-twin, the Bobber is powered by a totally modern, 1,197-cc, four-valve, double-overhead-cam parallel twin taken from the T120.

Where one putts, the other fairly roars. The Bobber boasts about 76 horsepower at 6,100 rpm and an almost equal torque number — 78.2 pound-feet at 4,000 rpm to be exact. Indeed, thanks to some judicious tuning — mostly in the intake tract — there’s about 10 percent more mid-range torque than even the ”High Torque” version of the Bonneville has.

The Bobber certainly doesn’t lack for puff. Low down, the throttle response is almost too immediate, there being a hint of the snatch that used to plague all fuel-injected Triumphs. On the other hand, that surplus of low-end torque is more than enough to challenge the grip of the meaty rear 150/80R16 Avon Cobra (the front is a fashionably skinny 100/90R19 Avon), long, black rubber darkies requiring just a handful of throttle and a quick dumping of the clutch. Indeed, Triumph is so confident of the 1,197-cc twin’s low-speed pulling power that it has the Bobber spinning an incredibly low 2,500 rpm at 100 kilometres an hour in sixth gear; 4,000 rpm sees you scooting along at nearly 100 miles per hour. Whatever the gear, once past 2,000 rpm, the Bobber clearly out-grunts the Sportsters that Triumph is trying so hard to emulate.

And with much more sophistication. The magic of the big Bonnie twin is that despite all its low-end power, it revs quite easily to its 6,750 rpm cut-out. Even at that speed, those big 97.6 millimetre pistons don’t much vibrate handlebar or footpeg. I continually found myself cruising along at 100 km/h (and more!) in fourth gear, the engine still so relaxed — it’s still only turning four grand at 125 km/h in fourth — that there had been no internal combustion cacophony to signal the need for an immediate upshift. And, what roar there is turns out to be quite authentic, the combination of the Bonnie’s 270-degree crank and Triumph’s “peashooter” silencers offering a little more liberal interpretation of allowable decibels than strict legality would seem to dictate.

Mind you, none of this is surprising since the engine is largely borrowed from the already celebrated Bonneville 120HT. What is unexpected is how well the chassis harnesses all that performance. Oh, there is, a la BMW R NineT Scrambler tested by Cycle Canada in the January issue, some reluctance to turn at low speed, the Bobber requiring more counter-steering than traditional sport bikes not to mention apex-diving nakeds. Apart from that, however, handling is surprisingly adroit. Turn-in at speed is excellent despite the combination of tall, skinny front tire and broad, flat rear rubber. Speaking of the Cobras, you’ll run out of ground clearance — the footpegs and then the exhaust system touch down first — before the Avons run out of grip. Even the suspension, which should be compromised by retro styling requirements — that rear hardtail-like “swing cage” and rather wimpy 41-mm front fork — doesn’t fare badly. Triumph says that limiting the Bobber to one rider — there is no provision for a passenger, even as an option — allowed its engineers to soften the short-travel — just 76.9 millimetres — rear suspension without resorting to the harsh compression damping typical of lowered customs.

Indeed, the Bobber’s most telling compromise to cruiser convention is the front brake, the combination of the single 310-mm disc and two-piston Nissan caliper simply not up to the Bobber’s turn of speed. Perhaps, an upgrade to a four piston caliper might improve feel and power, but Triumph isn’t offering such an accessory brake package. Nor is there a provision in the front hub for a second disc to be added. That said, anti-lock brakes are standard equipment — as is, in fact, traction control — both modernities a welcome counterpoint to the bike’s retro styling. Ditto for the selectable riding modes, Rain and Road, each with its own throttle map controlling the engine’s response to the ride-by-wire throttle.

Other worthwhile tech bits are the optional heated handlebar grips and the company’s first LED headlight is also available as an upgrade. That said, the most significant news in the customization department is that Triumph will be offering two Bonneville Bobber “Inspiration Kits.” Essentially, what’s happened is that the concepts — the “Quarter Mile” drag racer and the “Old School” retro — have proved so popular that Hinckley is making all the parts available for both as complete, dealer-installed options.

And, yes, the Old School kit includes those ape hangers.

______________________
Inspiration Kits
For those shopping for the ultimate Bonneville Bobber, Triumph is offering two Inspiration kits — Old School and Quarter Mile. Old School, emulating the ageless classic chopper, includes the aforementioned ape hanger handlebar, a cable kit for the higher grips, satin brushed “peashooter” exhausts, a painted, shorter front fender, a “statement” seat in brown leather, a black leather saddlebag that attaches to the “swing cage” as well as numerous detail upgrades like brushed badging and header bolts. The Quarter Mile package, meanwhile, substitutes super low clip-ons, the same “statement” seat only now in black leather, a blacked-out exhaust system (both headers and silencers) by Vance & Hines as well as a host of blacked-out badges and details. No prices are set for either yet, but you can expect a $2,000 to $2,500 uptick.

Stand-alone options, meanwhile, include the aforementioned LED Daytime Running Light headlamp, some waxed cotton and leather saddlebags and bar end mirrors Triumph designates as “peep.” Even a few touring accessories are available such as the heated handgrips (thankfully onboard on our chilly Spanish ride) and cruise control. The sportier side of the equation also gets a nod with a fully-adjustable Fox shock on offer as well as those aforementioned Vance & Hines pipes.