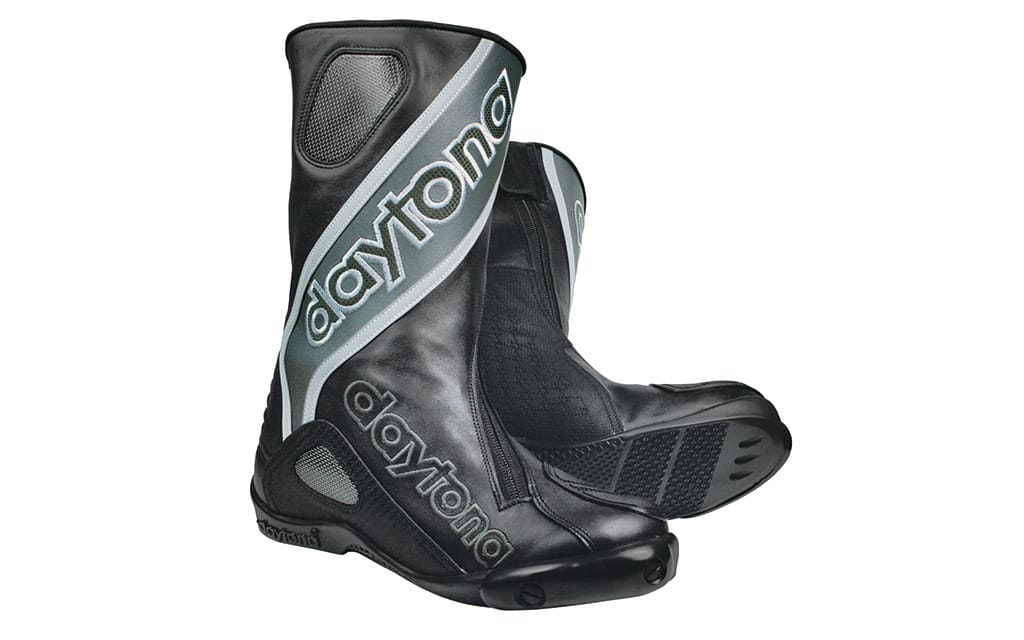 Style gives way to protection in Daytona boots
They are the plainest of boots, their appearance what you might expect if one were shopping for motorcycle apparel in a J.C. Whitney catalogue. My original pair, now more than 12 years old, is completely devoid of any colour or garnish, as plain as the rubber galoshes of your youth, if only they were constructed of the finest kangaroo leather money can buy.

Even my newest set, now three riding seasons old, has no more ornamentation than a simple coloured slash down the side, its pale blue offering at least something of a break from the monotony of black. Nonetheless, they too have none of the garish plastic, steel and titanium add-ons characterized by the over-the-top accessorization of modern sportbike footwear. In fact, the only thing that makes them stand out at all is that the aforementioned coloured slash has the brand name — Daytona — emblazoned on its side.

That simple garnish, however, turns out to be justification enough to fork over $1,031 for a pair of immaculately fettled, rainproof EVO Sports GTXs ($885 for the plain EVO Sports without waterproof Gore-Tex lining). Daytona boots are held in such high esteem that some of us used to getting freebies to test — that might be us motojournalists — actually resort to handing over our own hard-earned cash for the company’s boots, so secure do they make foot, ankle and lower shin feel. There’s even rumour of racers — including some of the biggest names in the sport — who have competed in Daytonas with their branding removed and their sponsor’s brand added.

So, what makes Daytona boots so special?

Well, unlike common motorcycle boots that wear most of their protective gear on the outside — hence the garish plastic sliders and protectors — the EVO Sports use a dual chamber construction with an outer nappa leather layer completely separate from the protective inner boot. Indeed, the outer boot’s sole duty is to provide abrasion resistance for the otherwise sturdy plastic inner layer. Said inner, rather than a bunch of small plastic sliders and caps, is actually two rather comprehensive plastic bits, the single piece upper protecting the entirety of the side and back of the calf area while the almost-as-large lower safeguards the foot and heel (the front of the shin is protected by a shock absorber that Velcros to the inside of the outer layer’s tongue). Connecting the two is a hinge that allows the articulation at the ankle required when you’re shifting gears or walking.

Considering that the inner boot is two giant pieces of plastic rather than pliable leather, the EVO Sports are very comfortable. The hinge, though basic in construction, does a good job of making the inner shell flexible enough for anything less than a full-on hike. Indeed, walking in the EVO Sports is no less comfortable than traipsing around in many lesser boots. The inner lining is soft enough that you never actually feel the plastic inner whether you’re walking or riding. And by opting for the $146 GTX option, the inner’s Gore-Tex lining promises dry feet. In three years of use, I’ve yet to find a deluge to challenge their impermeability.

Although not trumpeted as track footwear, the EVO Sports even feature screw-in toe guards for those dragging boot as well as knee. That said, Daytona does offer an even more protective boot, the Security EVO. It’s based on the same dual-chamber construction, only the outer has been upgraded to more abrasion-resistant kangaroo hide and the inner is made of an Aramid/plastic/Kevlar combination that is even stronger than the Sports’ plastic shell.

The proof is, as they say, in the crashing. Matt McBride of Rider’s Choice loves to point customers to a Security inner that survived being T-boned by another motorcycle. Two hundred kilograms of speeding superbike drove the rider’s foot into his ZX-6R’s crankcases at high speed and while the impact delaminated a portion of the Security’s inner, the energy absorbed by the Kevlar in doing so allowed the owner to escape with just a couple of broken toes. Even that might have been prevented had he been riding with the latest GP Race version on the Security EVO, which extends the Aramid/plastic/Kevlar protection to the toe area.

I’ve also had the unfortunate opportunity to test my aging Security EVOs and there’s a sense of, well, security that I’ve never known in previous boots. As a result, I’ve seldom been on the track in almost a decade in anything other than my Daytonas, and I haven’t ridden on the street in anything other than my EVO Sport GTXs for the last couple of seasons. Safety is as much confidence in your gear as it is the ability to avoid collision.

The helmets, jackets and even the racing suits I ride in may vary, but my Daytonas are the one piece of motorcycle gear that I never leave home without. Yes, they may be hellishly expensive, but what price security?