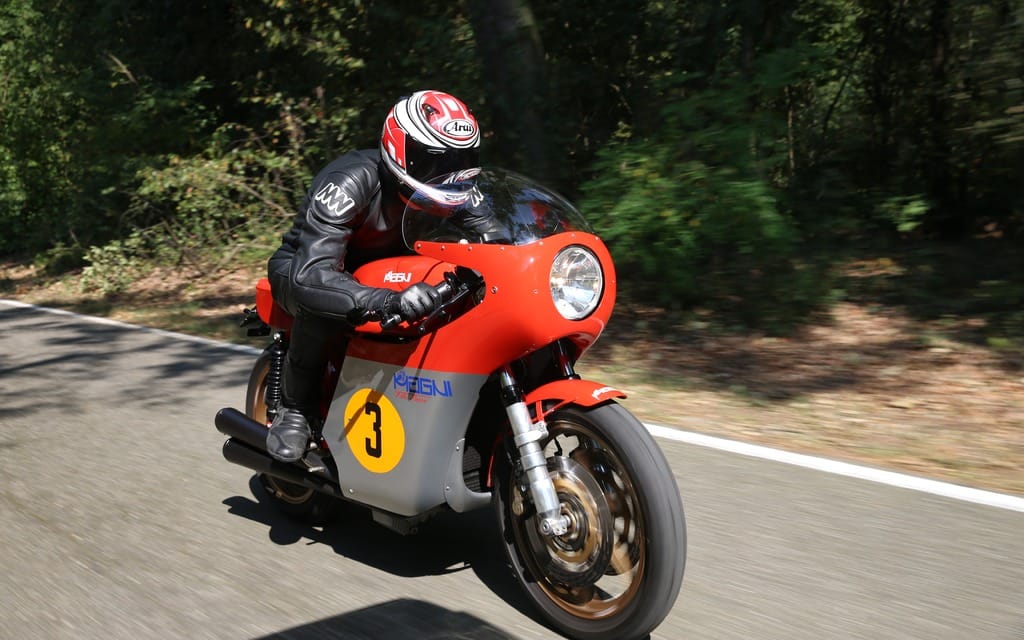 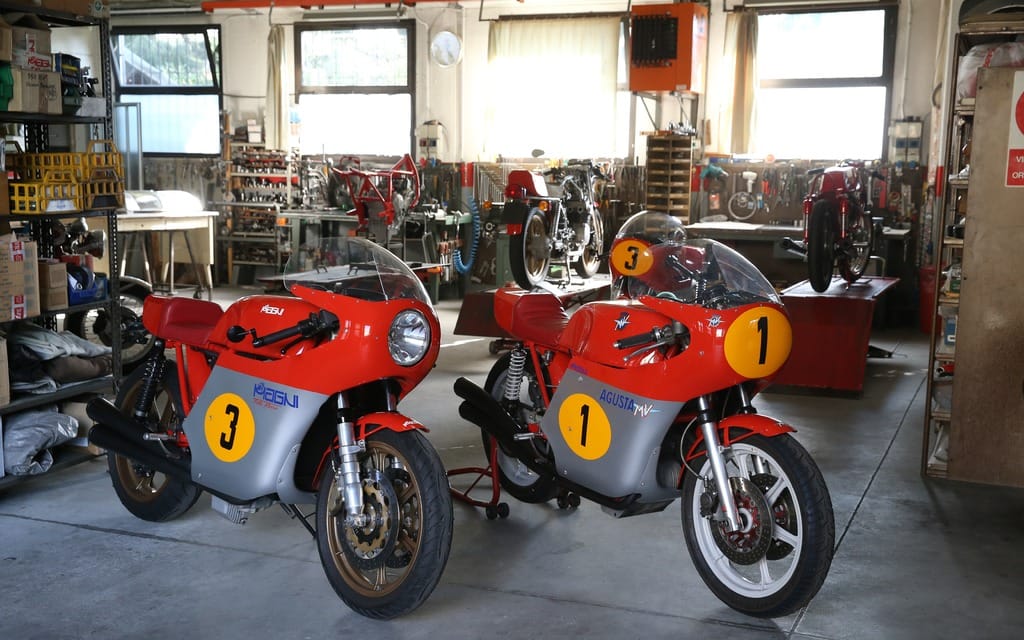 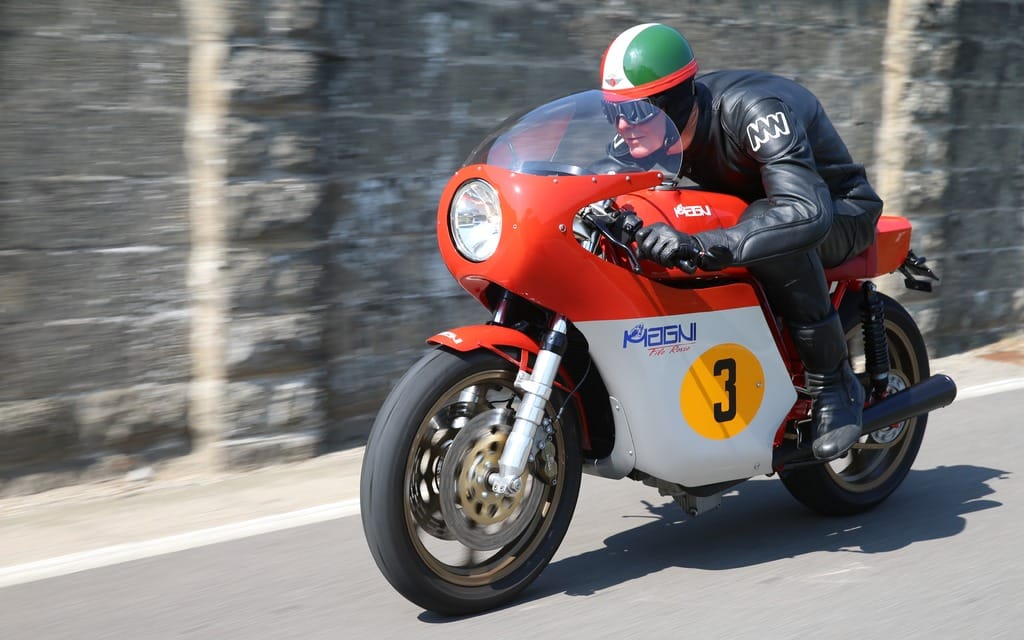 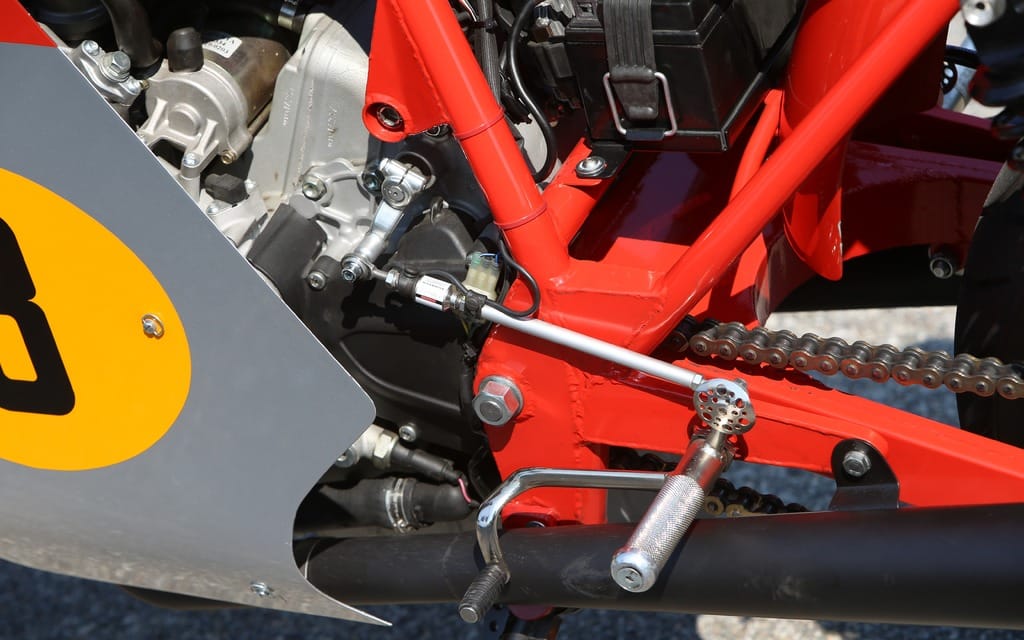 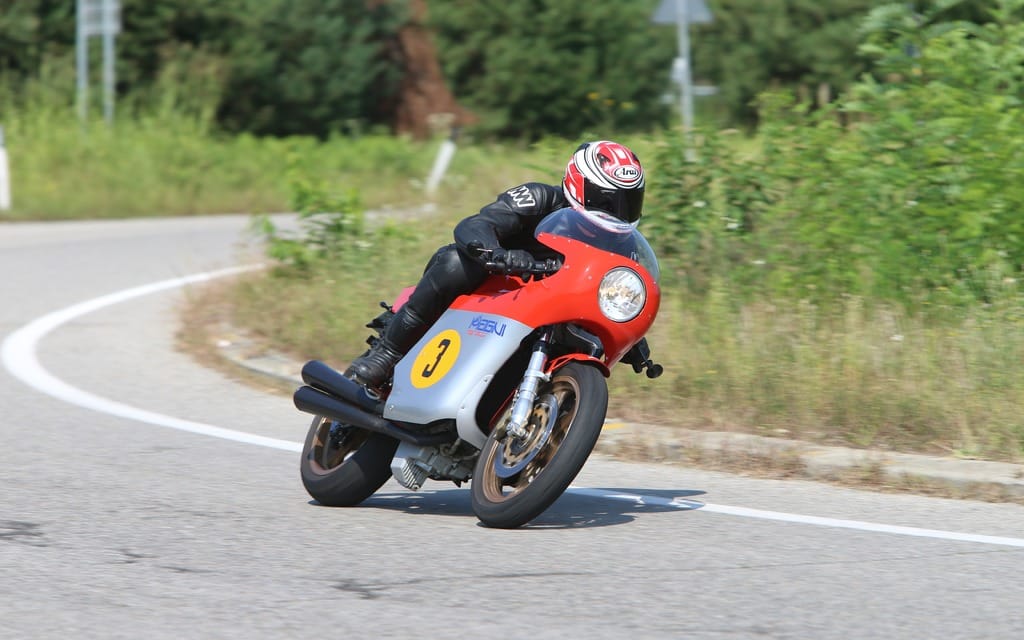 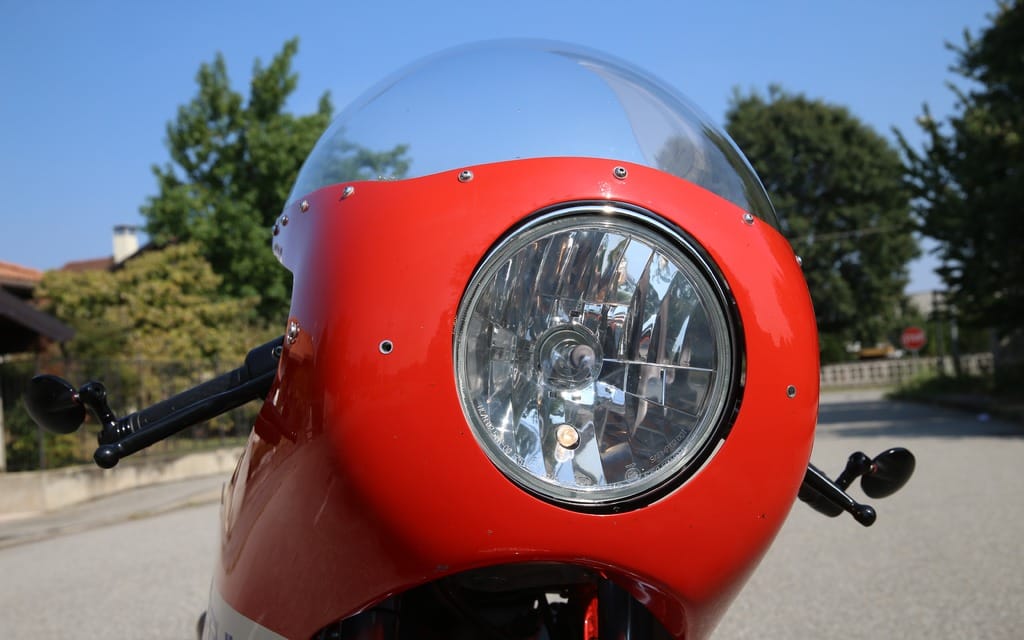 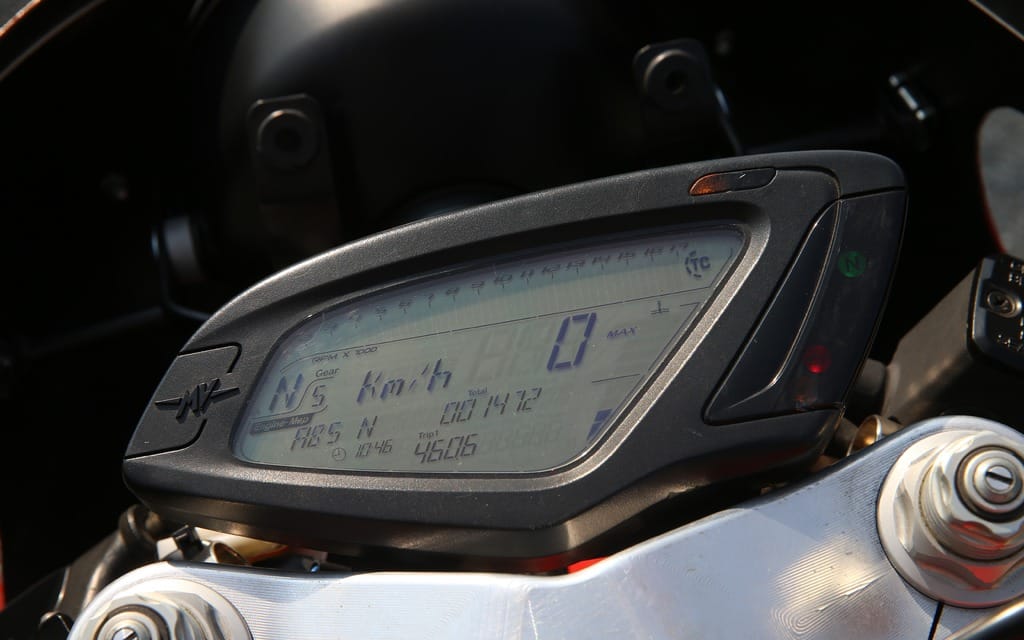 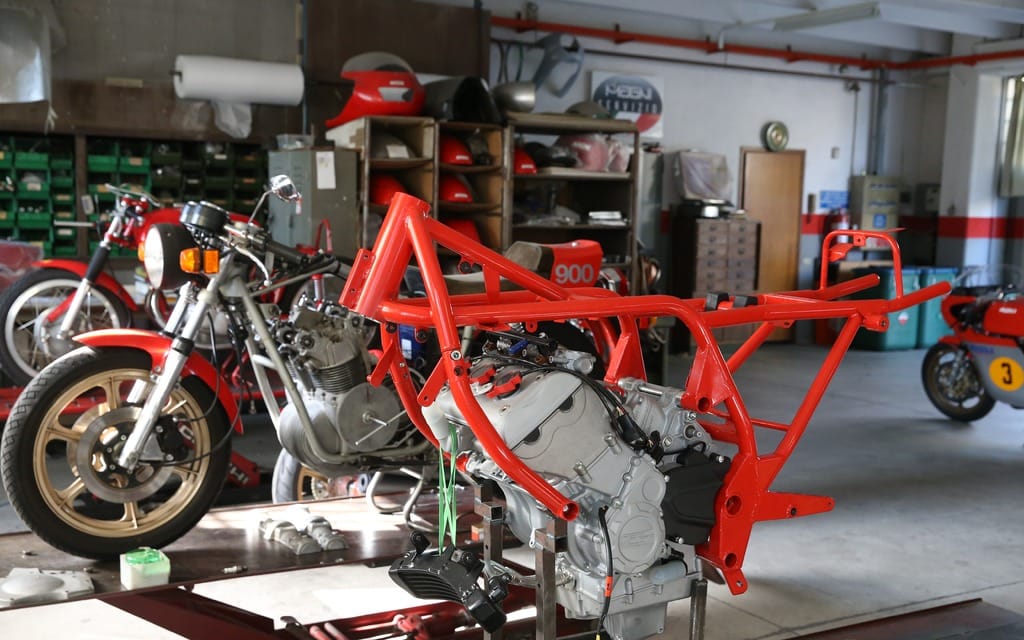 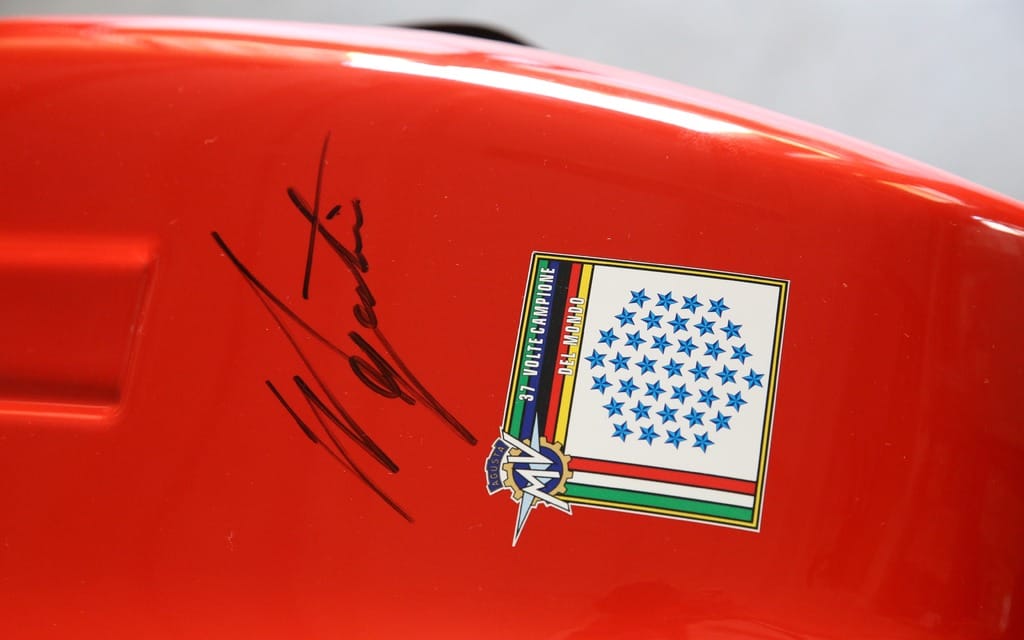 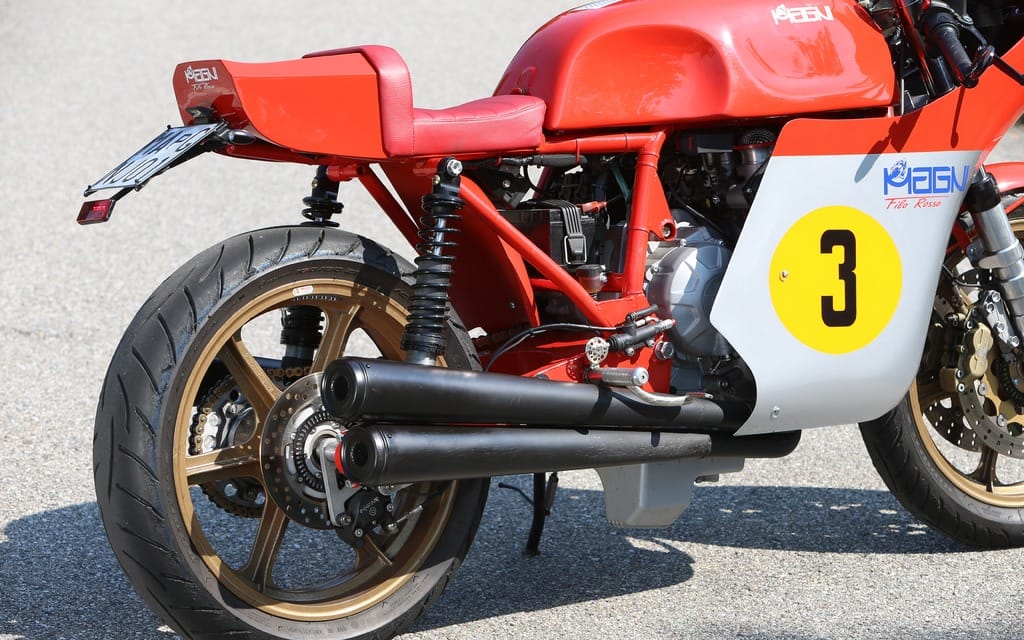 MV Agusta revives a link with the past
The grand prix replica experience doesn’t get much more vivid than this, especially for those captivated by GP racing’s previous four-stroke era of the ’60s and early ’70s. I’m accelerating past traffic on a road bordering Milan’s Malpensa airport, crouched over the long, red petrol tank of an MV Agusta whose high-revving three-cylinder engine is assaulting my ears with its barely silenced scream.

On the other side of the airport’s tall wire fence, the empty runway and access road look inviting. As I cane the Magni Filo Rosso down the highway alongside, I’m reminded of Arturo Magni, the former MV Agusta race team manager who died last year aged 90, telling how his riders including Agostini and Hailwood used to speed-test their factory racebikes on Malpensa’s long straights, when the all-conquering team was based nearby at Cascina Costa.

Half a century later, it’s a thrill to be at speed in Malpensa aboard an MV-engined triple that looks unmistakably like one of those mighty factory “Gallarate fire engines.” But this is a streetbike, the Magni Filo Rosso, powered by a 675 cc powerplant from the modern Brutale 800, and designed and produced by Giovanni and Carlo Magni, Arturo’s engineer sons.

Filo Rosso means “red thread” in Italian, and the name is appropriate. The phrase refers not to a tachometer redline, but to the Italian concept of a thread that joins historical points. “The Filo Rosso touches all our family’s history,” Giovanni, the younger brother, had said before I left his workshop. “It’s from the beginning: my father, MV Agusta, the race department, three cylinders, Agostini. It links them all together.”

That MV racing inspiration is clear from a glance at the Filo Rosso, with its curvaceous fairing finished in the red and silver colours that dominated grand prix racing for two decades, winning 17 consecutive 500 cc world championships between 1958 and 1974, under the management of Arturo. There are yellow, 500 cc-class race plates (but a round headlight in the fairing nose), a long tank and shapely tailpiece; slender 18-inch wheels; a trio of black exhausts.

The engine breathes through open bell-mouths, and there’s a tubular steel twin-cradle frame behind the bodywork, but that’s where the similarities to an old racebike end. This frame and the box-section swing-arm were designed and constructed by the Magni brothers at their workshop in nearby Samarate, where the family business has been based since Arturo set up business in 1977 following the closure of MV’s motorcycle operation.

The Filo Rosso owes its existence partly to a previous Magni streetbike, the Storia, which Giovanni—who has run the business in recent years while elder brother Carlo worked as senior engineer at the nearby Agusta helicopter factory—created three years ago around the four-cylinder engine from MV’s Brutale 1090. The Storia looked good and performed well, but used a standard Brutale frame and attracted criticism from some who remembered the old Magni MVs of the seventies with their special frames incorporating chain-drive conversion.

This time MV’s smaller, 12-valve triple motor is used, not least because Giovanni deemed its 120 bhp-plus output quite sufficient for a light, racy bike with a relatively old-fashioned chassis layout. “We wanted a frame that remembered the design of the old racing frame but we needed it to accept the power of the new engine. And also we wanted a modern steering angle and technology such as the suspension, so we have a frame that looks old but works like a modern bike’s.”

The frame is hand-welded from chrome-molybdenum steel, as is the box-section swingarm. The aluminum petrol tank is also fashioned by hand on the Magni premises. Giovanni designed the triple clamps, which are CNC-machined by a local specialist. The 18-inch cast magnesium wheels are also Magni creations; wheels were among the first parts that Arturo Magni’s EPM firm produced in the seventies, and they’re still in demand for classic racing.

Other parts come from local specialists. The suspension looks period, but the 43 mm Forcelle Italia–style forks and twin rear shocks were commissioned from local firm Ottodiquori, which mostly makes high-end components for Harley-Davidsons. Brakes were an easy choice: Brembo, whose four-piston front calipers are used, is also based near Milan. Clocks and most other electrical bits are standard MV but indicators and other bits come from Rizoma, another local firm.

The Filo Rosso looks superbly authentic, especially when it’s surrounded by other MVs and specials in Magni’s atmospheric workshop. Much effort has been made to replicate the look of an MV race bike, albeit not one particular model. “The fairing is a replica of the old racing fairing, just adapted a bit,” says Giovanni. “The exhausts remember the three-cylinder MV, the tank was used by both three- and four-cylinder, the saddle is the same shape as the four-cylinder.”

Whichever MV the Filo Rosso most resembles, there’s no doubt about its racing heritage when you throw a leg over the low, slim single seat, reach across the long tank to the clip-on bars, and lift a foot to the high rearset pegs. The riding position is almost jockey-like, and the Magni’s lightness—claimed dry weight is 167 kg, a few kilos less than MV’s faired F3—adds to the impression of an old-school racebike.

The retained MV instrument panel adds a contrastingly modern touch; this can be replaced by traditionally styled clocks if required. Thankfully there’s no need for an Ago-style run-and-bump to get the Rosso started: a press of the button fires up the engine with a fruity though far from deafening sound, thanks to the combination of mesh-covered bell-mouths and fairly free-breathing silencers. The Filo Rosso isn’t homologated for road use in most countries (most sold so far have been for track use), and I’m riding on trade plates.

After pulling away for a blast on the roads north of Samarate, it was a fantastic experience to be riding this unmistakably historic looking bike, and to find it every bit as sweet-running, manageable, quick and exciting as a modern MV triple. The controls were light and accurate, and junking the standard MV airbox, replacing the stubby exhaust and modifying the injection system to suit has done no harm to the three-cylinder engine’s throttle response or ability to rev.

The Rosso’s low-speed response was impressively smooth, and its midrange output sufficiently strong to allow easy overtaking on the sometimes crowded roads near Samarate. And when I got onto a faster, near-empty dual-carriageway, put my chin on the tank and wound open the throttle, the bike leapt forward in fine style, the retained quick-shifter helping it quickly and very tunefully howl towards the 13,000 rpm max through the gears, putting almost 250 km/h on the clock before I remembered that the Carabinieri are much less relaxed about speed now than they were in the sixties.

When I turned off the highway in search of twistier roads the Filo Rosso was equally at home, matching its flawless high-speed stability with effortless handling, plus powerful braking from the non-ABS-equipped Brembo system. The bike had clearly been well set up by the Magni’s test rider at the nearby Pirelli R&D track, where its geometry had been fine-tuned and its footrests raised to give suitably generous ground clearance. Its blend of fairly steep, 25-degree rake and 85 mm of trail combined with the relatively slim, 18-inch front wheel to give a light yet accurate steering feel.

The suspension worked well, too, belying its old-style look with a respectable level of damping, and sufficient compliance for a reasonably comfortable ride, despite the fairly thinly padded seat. The fact that the rider’s weight is shared between bars, pegs and seat must help, provided you don’t find the knees-in-your-armpits riding position too cramped. The bike would probably suit a youthful Agostini better than some likely owners, but that’s one price to be paid for such an authentic look plus the ability to corner as hard as the reassuringly grippy Metzeler Z8s allow.

Talking of price, the Filo Rosso’s quality of components and painstaking hand-assembly (at a rate of roughly one bike per week) results in it costing €30,000 plus VAT. Of course, you can get many of the same sensations from an MV Agusta F3 for much less. But for those who can afford it, the Red Thread is magical, and perfectly named: a unique and captivating blend of modern performance and MV Agusta heritage, created by the Magni family that helped shape the marque’s glory days and has kept its reputation burning brightly ever since.