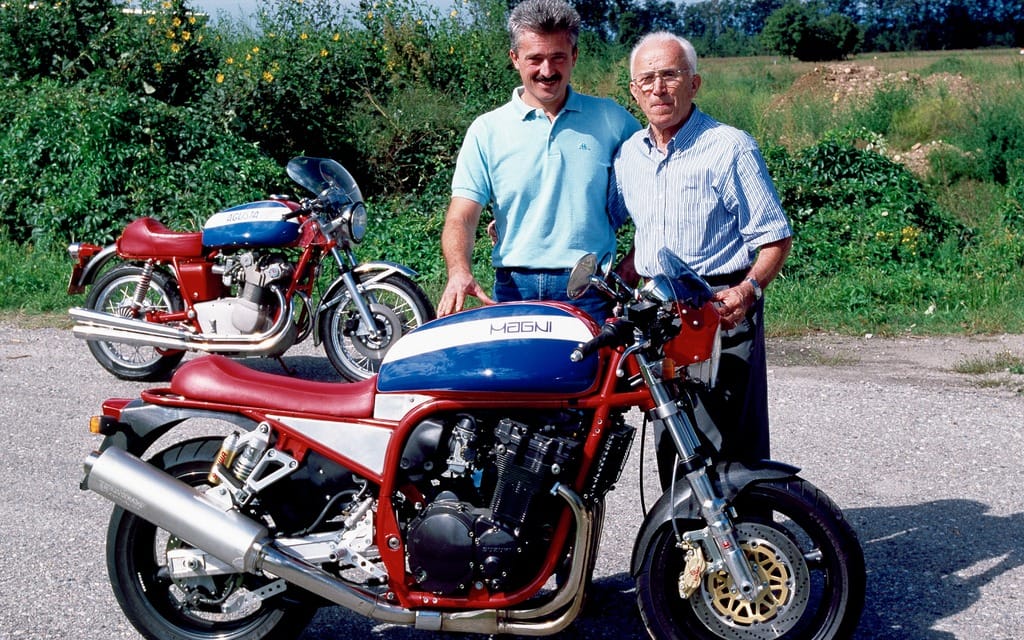 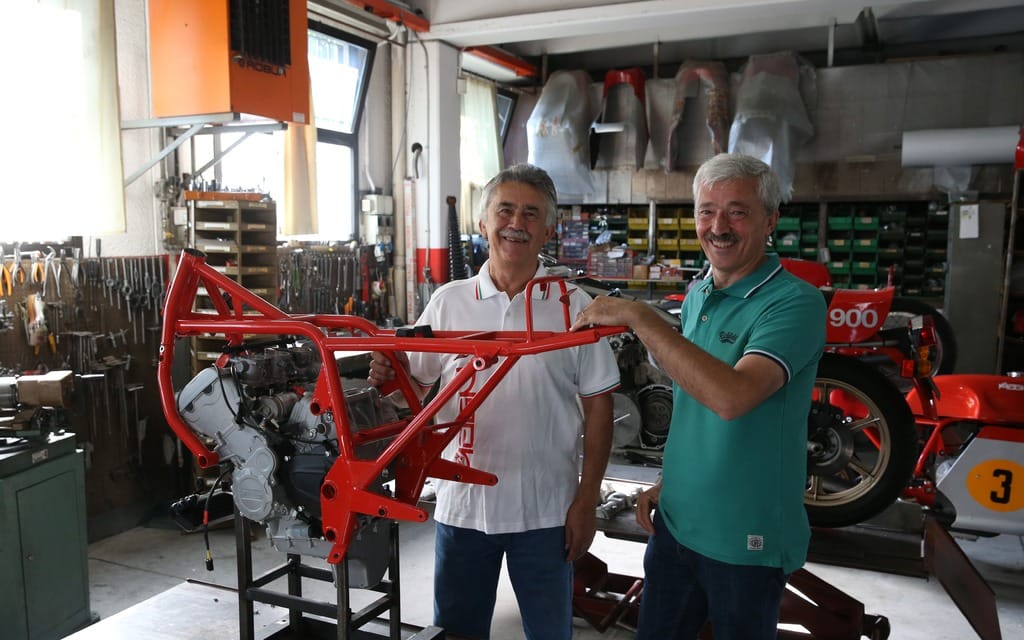 The Filo Rosso brings the story of the Magni family’s link with MV Agusta full circle. Arturo Magni actually began his career in Gilera’s racing department, working for the legendary Piero Remor whose four-cylinder design transformed 500 cc grand prix racing. When Remor moved to MV Agusta in 1950, Arturo followed, becoming manager of the all-conquering MV Reparto Corse that won 75 world titles and more than 3000 races over the next 27 years.

After MV retired from racing in 1977, Arturo set up in business in partnership with his engineer sons Carlo and Giovanni. They produced cast wheels under the name EPM, and exotic MV Agusta specials based on the four-cylinder 750 Sport and America models. A Magni MV typically had a race-type frame with chain drive conversion, tuned engine, plus tank, seat, fairing and exhaust that made it resemble a grand prix racebike. Built in tiny numbers, they were among the fastest and most desirable superbikes of the ’70s.

In the ’80s the Magnis also produced kits for Honda 900 Bol d’Or fours, BMW boxers and Moto Guzzi V-twins. With MV having ceased production, they developed closer links with Guzzi, creating specials including the retro-style Sfida 1000 (“Challenge”) and more modern Australia, named following competition success Down Under. The Sfida and Australia were updated several times as production continued through the ’90s.

In 1999 the Magni firm, now run by Giovanni (Arturo had retired; Carlo worked at nearby Agusta helicopters), began production of the Sport 1200S, powered by Suzuki’s four-cylinder Inazuma engine and inspired by the style of MV’s 750 Sport. That ’70s superbike was also to inspiration for the more recent Storia, Magni’s first MV-powered special, which used the engine and frame from the four-cylinder Brutale 1090. In total, Giovanni estimates that Magni has produced roughly 1600 bikes over almost three decades.

“The idea with the Storia was to create a bike that wasn’t too expensive so we used the standard MV Agusta frame, and changed the tank, seat, wheels and so on. It has been successful, but some customers said that if you want to produce a real Magni MV you have to make a new frame, otherwise it’s not authentic.

“So that’s what we did with the Filo Rosso. I wanted to remember the style of the old racing bike, especially the three-cylinder bike of Agostini. The first prototype was shown at EICMA in 2014, and the reaction was really positive [interest following that Milan Show unveiling crashed the Magni website], so we developed the bike throughout 2015, and started production this year.

“It was a lot of work to develop all the parts. The frame looks like an old one but it is completely calculated for the new bike. The engine has a lot of power—125 bhp is a lot for this kind of bike! So you can’t use an old frame design. Also the suspension looks old but it’s completely new with modern hydraulics inside.

“The engine is standard, because if I have to work for homologation it will be easier. But on this bike there is no airbox and no catalyzer, because at the moment we are selling the Filo Rosso mainly to people who want to use it on the track or in demos.

“Some customers want to use it on the road and have made one-off homologation. This depends on which country you are in. In Italy it is quite difficult, in other countries it is possible, and in some like Canada it is easy. We are producing only to order, so we have a waiting list—at the moment of another five bikes. Assembly takes about three days, but only if we have all the parts. Normally we have to wait for something.”