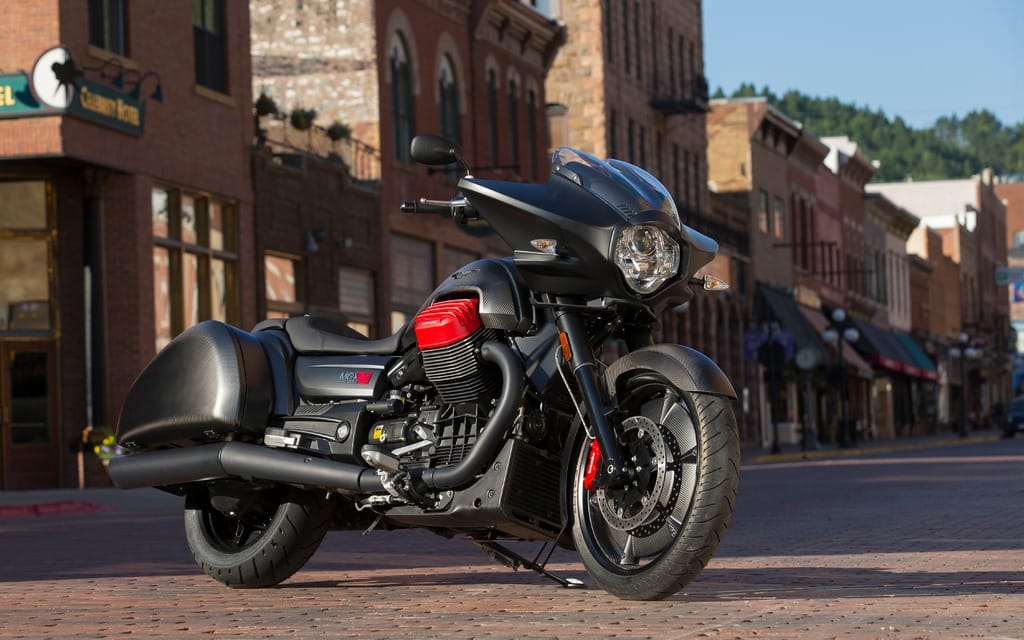 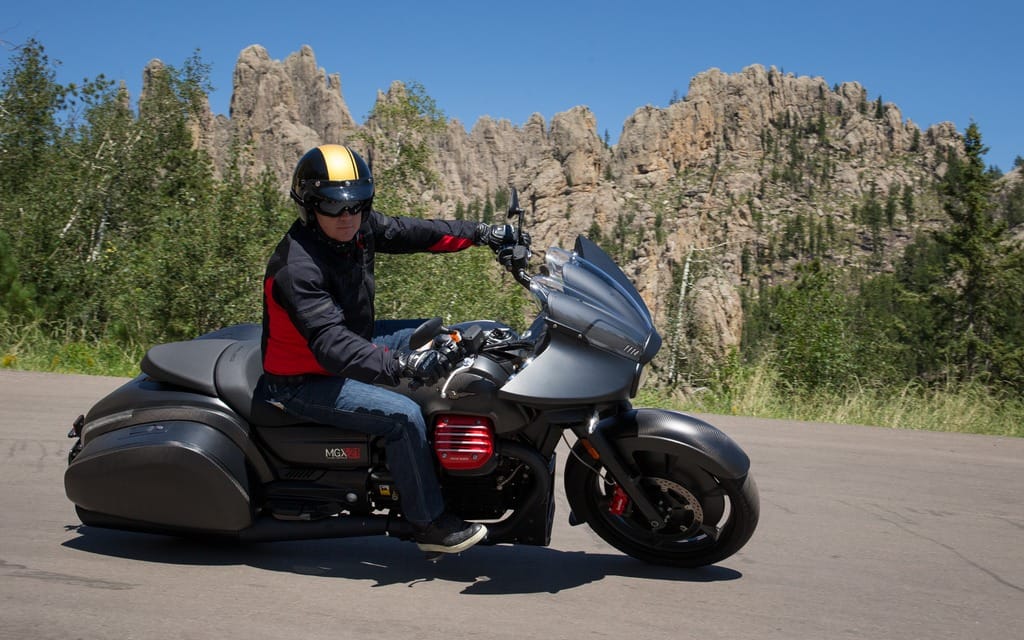 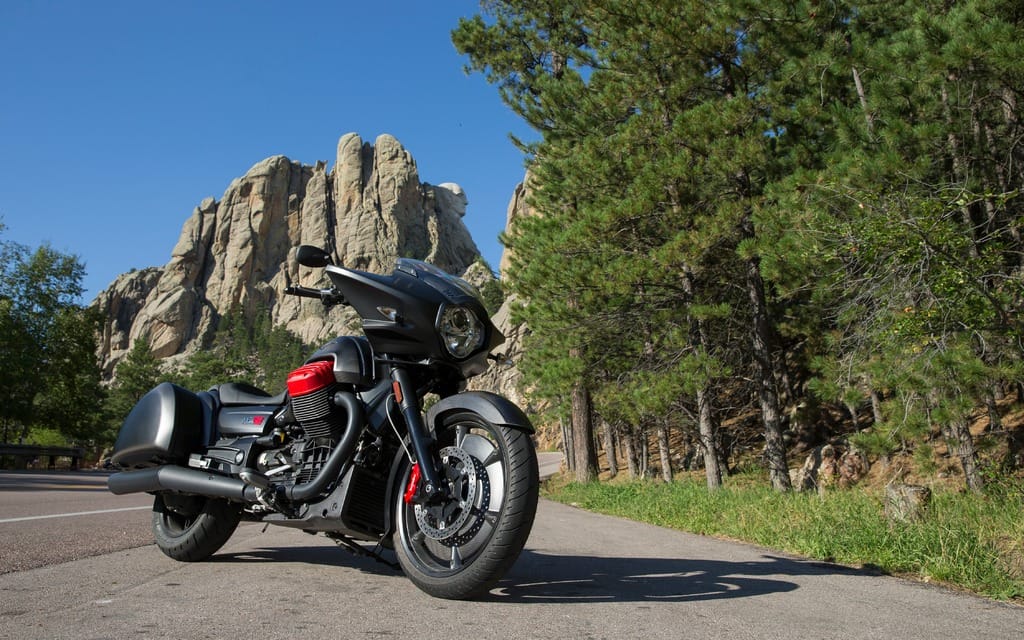 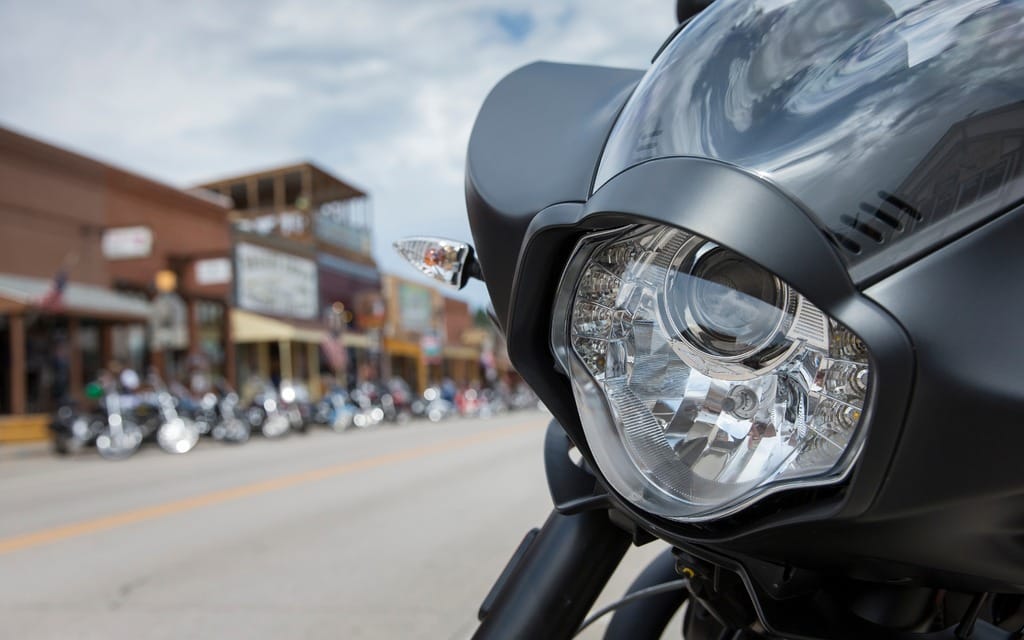 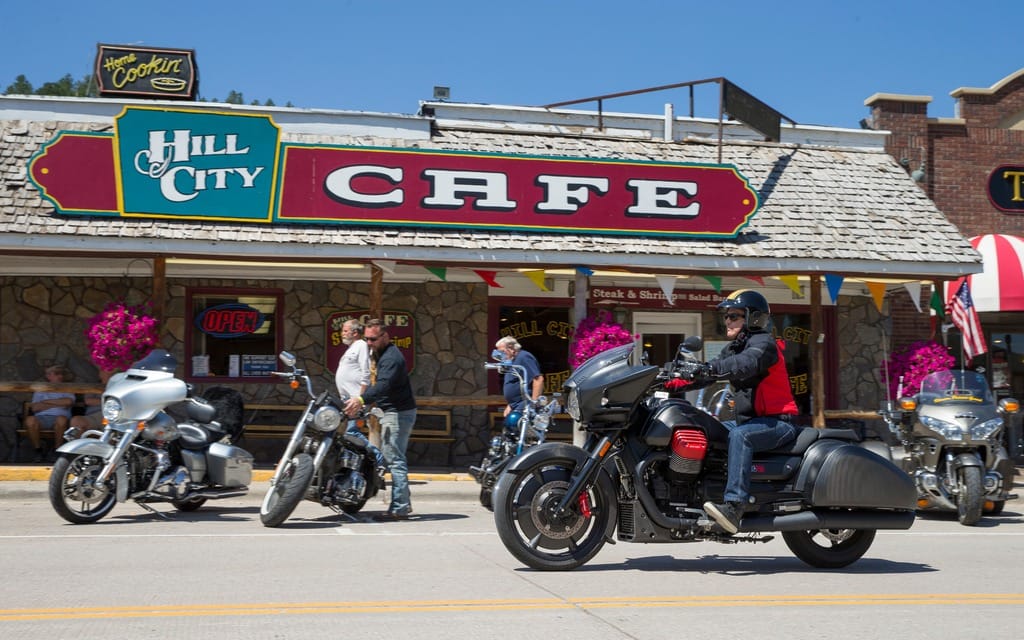 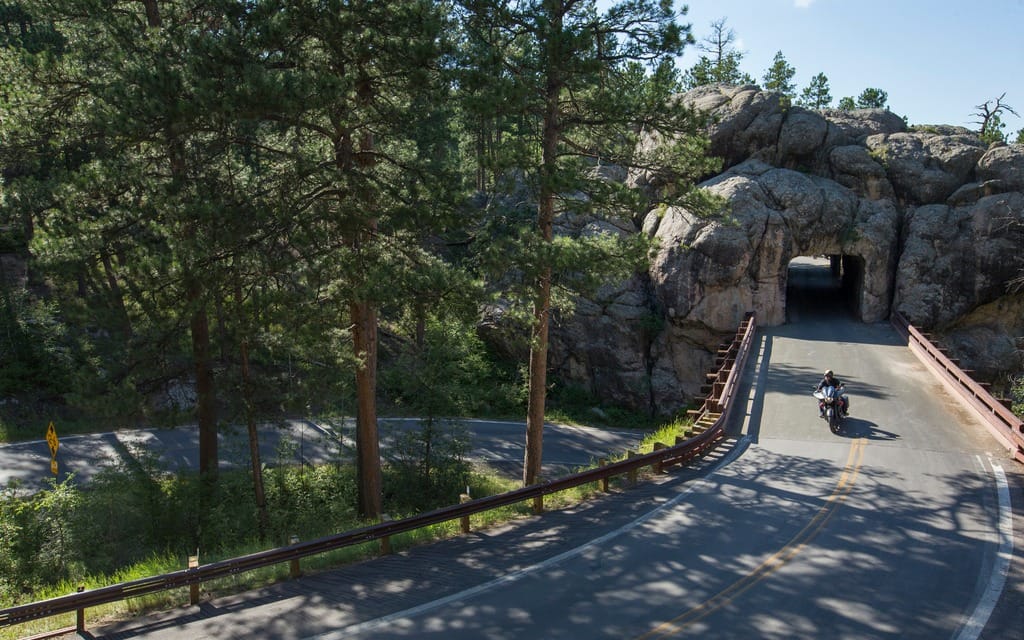 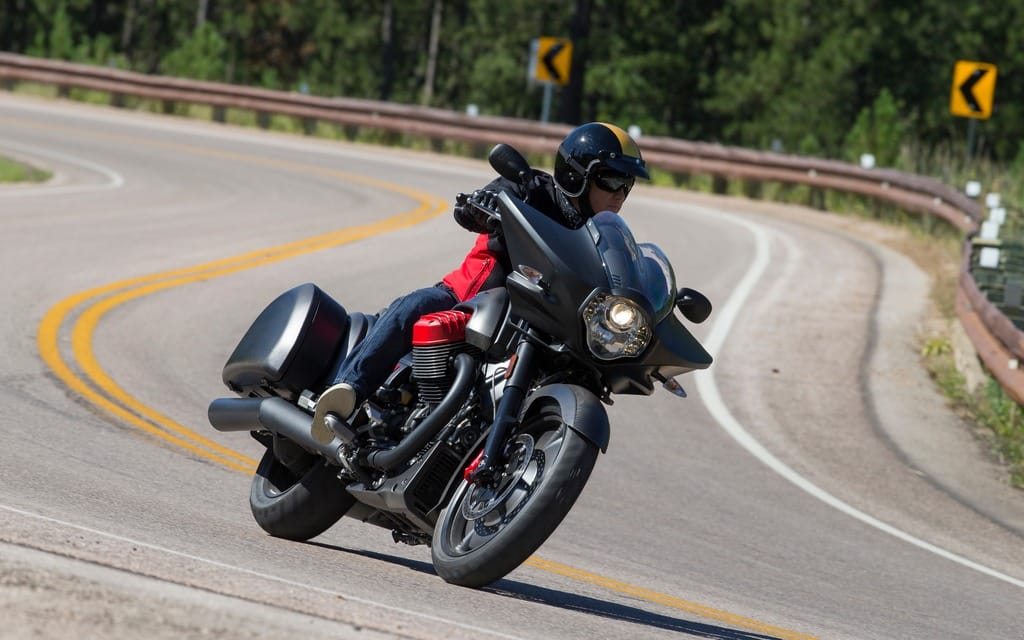 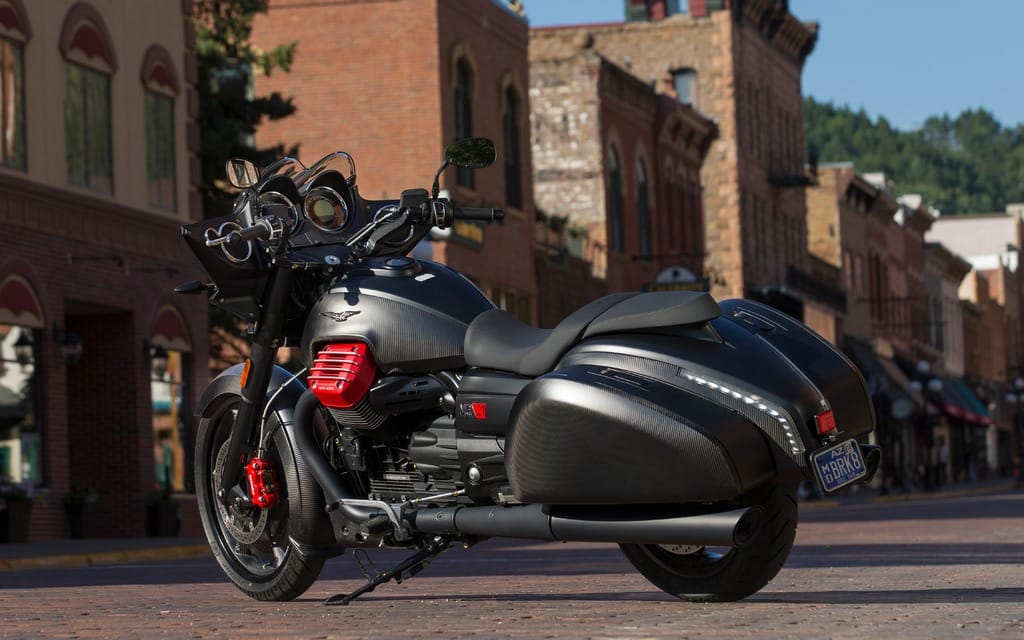 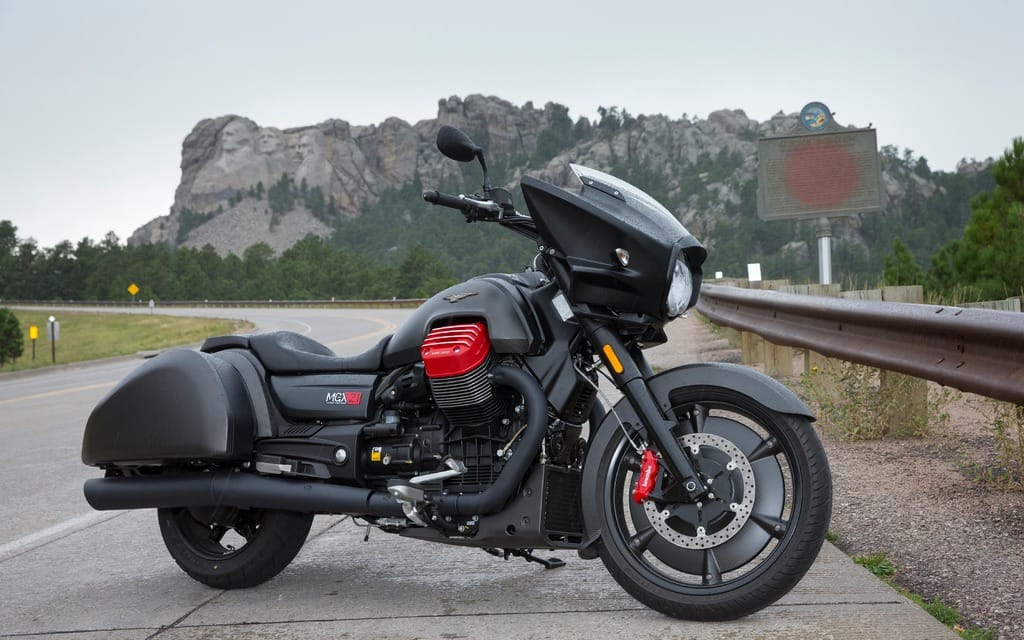 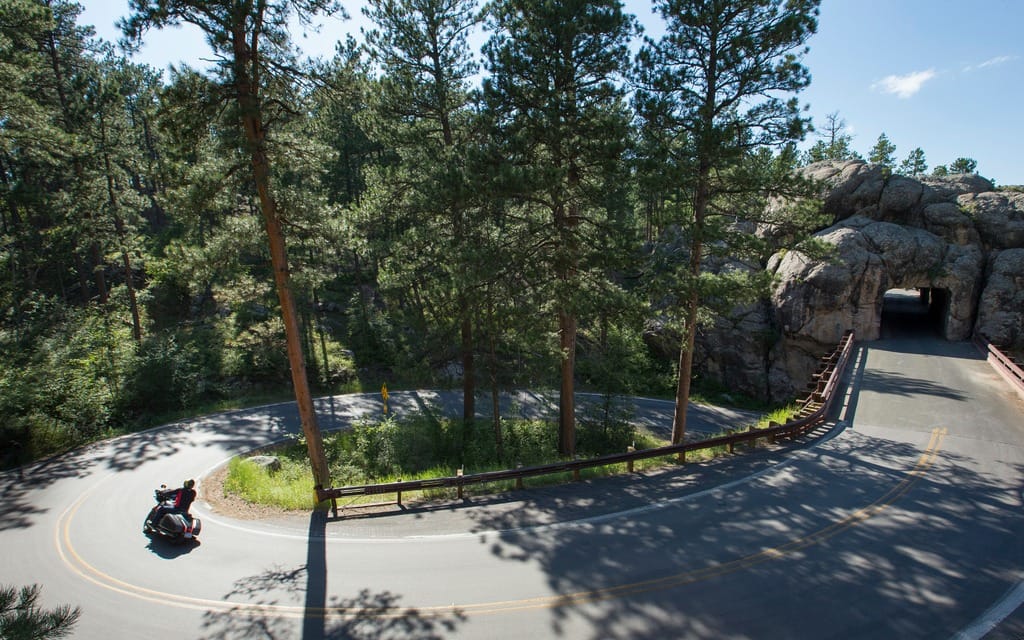 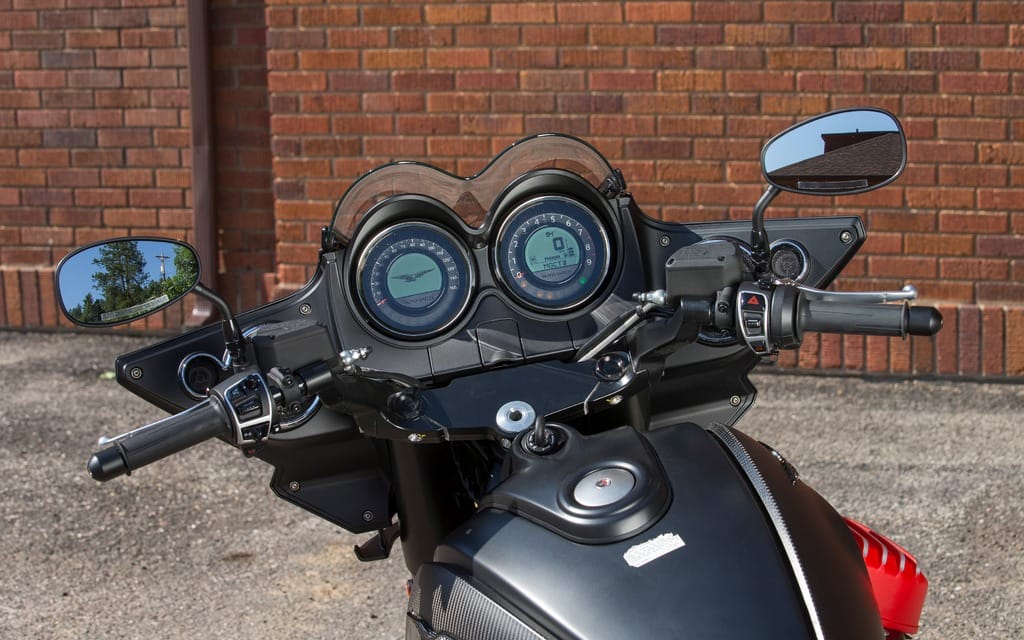 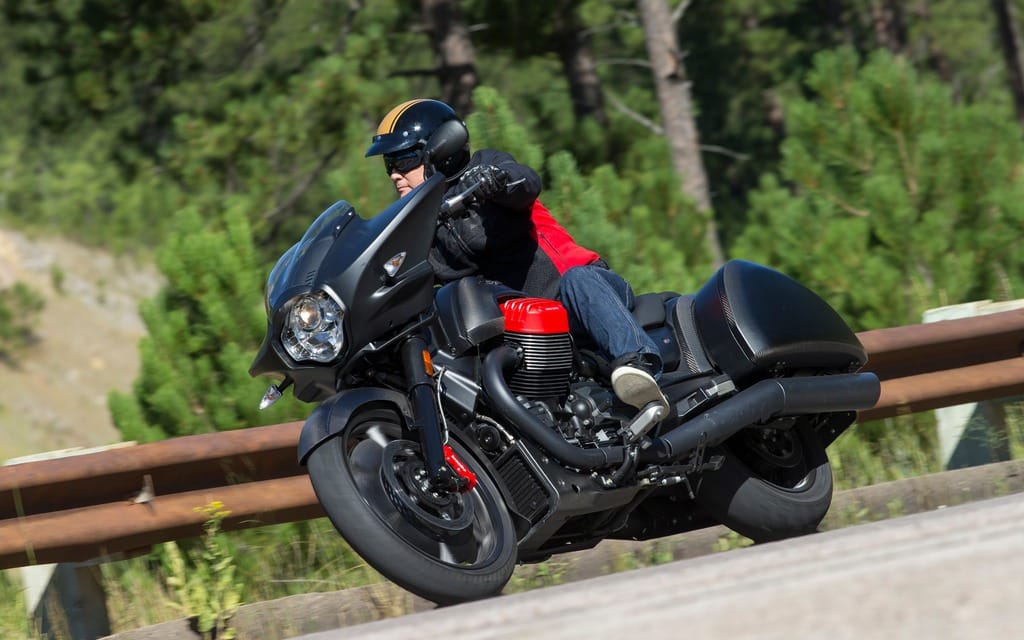 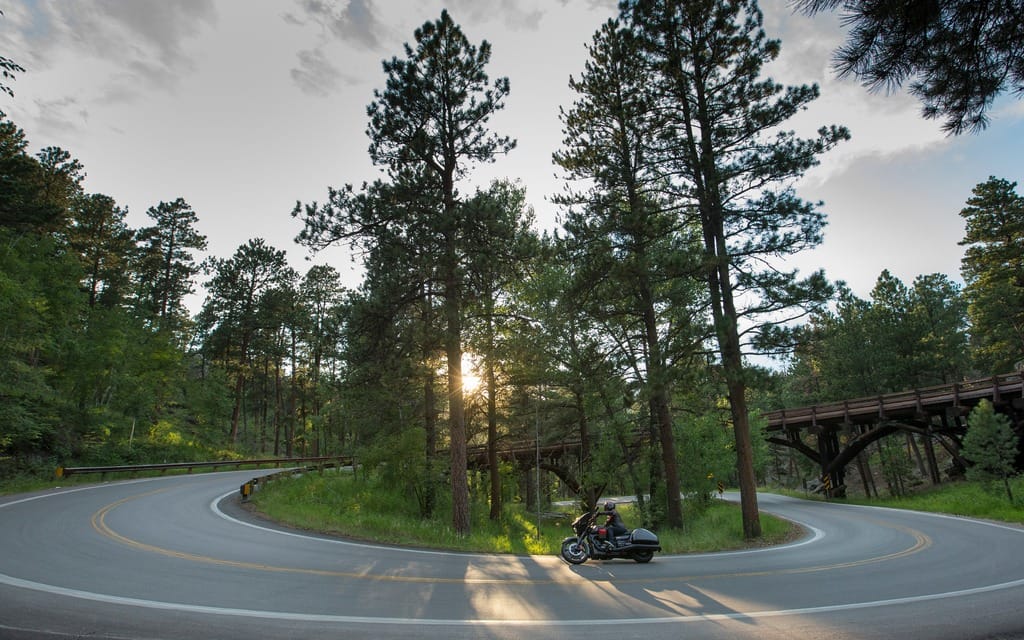 Moto Guzzi bagger is da bomber at American biker party
Sturgis, South Dakota, capital of the old-school biker. A village in the hills of the American Midwest becomes for a week the gathering place of more than 500,000 people who have come to party and ride in the famous Black Hills.

If it seems odd that Moto Guzzi chose this place for the North American launch of its new bagger MGX-21 flying fortress, you are not alone. Yet it is in this bucolic setting in the days before Bike Week that the Italian manufacturer celebrates its new toy. Moto Guzzi would take the opportunity the following week to offer test rides of this new model to the hordes of motorcyclists who invade this hick town to party, buy t-shirts with skulls and tribal drawings and ride motorcycles of all brands (but mostly Harleys). If there is a place to test the interest of the typical American male for an Italian designed and manufactured bagger, it’s here. Looking at the cheerful crowds walking the Sturgis streets, I’d say some of them are probably not the most open-minded when it comes to other cultures. Let’s say there were more Trump t-shirts than Hilary posters in and around the city. I guess the big cheeses at Moto Guzzi figured that if these riders loved this bike, everyone else would.

The Guzzi PR team went all in: they brought 30 bikes and had the CEO of Aprilia racing, Leo Mercante, fly in; they also asked renowned designer Miguel Galluzzi to join in on the fun. Galuzzi has designed legendary models like the Ducati Monster and Aprilia Dorsoduro. These distinguished gentlemen were on hand to answer questions from journalists but also to take the opportunity to ride and interact with us on the creation of this new model.

The flying fortress is a modern version of the typical bagger. Thanks to Galuzzi’s experience they took the classic concept of a comfortable, low bike equipped with panniers and brought it to another level, creating a bike that meets the requirements of this class but also raising the bar for looks and performance.

Because this bike is definitely different. The first things that pop out are the many carbon parts: mudguards, front fender and stylized bags with elongated shapes. But what strikes most is the very large 21-inch front wheel with a carbon hubcap that covers almost entirely the centre of the wheel. All these parts actually do give the effect of a fortress on two wheels, hence the code name for this bike: MG X-21 Flying fortress. Galluzi explained that if we dissect this name, the MG obviously stands for Moto Guzzi but the X stands for “a little non-standard.” The 21 is for the dimension of the front wheel but the nickname flying fortress comes from the B-17 bomber that inspired Galuzzi in the design of this bike. One could argue they could also have used hammerhead because the front windshield clearly recalls the noggin of a hammerhead shark.

The MGX-21 is based on the Moto Guzzi California 1400 platform. The 1380 cc 8-valve V-twin engine produces a claimed 95 hp at 6,500 rpm and 89 lb-ft of torque at 3000 rpm, and the power is applied to the wheel through a shaft drive. A ride-by-wire system breathes life into this big engine block with three modes whose names are Italian but principles are universal. It gives us an opportunity to learn a little Italian while riding. There is a sport mode called Veloce, a Touring mode called Turismo (I could have guessed those two) and a rain mode called Pioggia. Since we were riding in a large group in the black hills, my preferred mode is Turismo as it offers a quick response without being too aggressive, though I have to downshift a gear or even two for overtaking. In Veloce mode, downshifting a single notch raises engine revs sufficiently to fly past the many helmetless tattooed bikers. It is only after completing the last photo session that, as B-17 crew members, two other Canadian journalists and I are able to escape and test the real capabilities of this big and quite long bagger. Luckily we don’t cross any state troopers as we’re riding hard and passing small groups of slow bikers who probably only see three modern-looking headlights arrive in their mirrors and then three sets of red vertical LED tail lights in the distance ahead of them. Yes, a modern bagger can be a lot of fun in these long curves of the South Dakota mountains. We are on fire and the three Italian bikes allow us Canadians to tackle this American road with confidence. The ground clearance is surprisingly high and allows us to avoid rubbing the ground almost everywhere but the tightest curves taken at a good pace.

The engine is smooth and the exhaust note is nice and low without being too pronounced. But this bike doesn’t make a strong enough exhaust sound to turn American biker heads. Still, the Flying Fortress is an eye-cathcher with all the carbon parts, the large windshield with its unique shape, and especially with these superb wheels and red engine heads. Several bikers spontaneously came to meet us when the group of journalists stopped somewhere. As in other times when I ride Guzzis, these meetings result in stories like “that’s a Guzzi! I had a friend who had one . . .”

The frame of the MGX-21 is the same as the California model’s but the suspension has been enhanced to provide better direction. The large front wheel is a bit difficult to handle when moving at low speed but Guzzi engineers have designed a small spring-loaded shock that acts gradually to prevent the wheel from plunging aside during low-speed turns. It does not give the agility of a supermoto but it helps to reduce the effect of the weight and size of this big forged steel wheel.

The 45 mm fork offers 4.2 inches of travel and at the back we find a dual shock system with hydraulically adjustable preload. The only times I see the limits of this bike are in very tight curves and on very bumpy surfaces. The bike weaves under my butt after I hit a good bump in a long curve. Fortunately, the suspensions and the rigid frame quickly stabilize the bike without affecting direction. The MGX-21 is a bagger indeed, but with a touch of Italian performance.

Speaking of Italian performance, the big Italian bagger is equipped with Brembo brakes. Two 320 mm front discs are pinched by large tinted calipers of the same bright red as the engine heads and a disk of 282 mm is installed in the rear. For even more security, the owner can select between three traction control modes.

The saddle is rather low at 29 inches and offers a level of comfort worthy of a throne for riders of all sizes. The windshield creates a good air bubble to keep wind off the chest and I don’t feel any turbulence around my helmet, at least not for my midsize frame. The front fairing incorporates a sound system with a fairly good output, a bluetooth system, a charging port and a cruise control button, though I do not find any resume function on the cruise control. You’ll need to reset the speed every time a slow driver cuts you off. Also, the engine reacts a bit abruptly to the + and – buttons.

The side cases offer 29 liters of space but one as to be clever to successfully get 29 liters of material into them. Like many sport-touring motorcycles or cruisers, the oblong shape and the side opening of these bags make it hard to close them without spilling anything. Their closing mechanism is well designed and easy to handle, however.

So, after riding it, what did I think of this bike? I loved it. Moto Guzzi succeeded in revisiting the old bagger concept and updating the platform for modern riders and exciting roads.