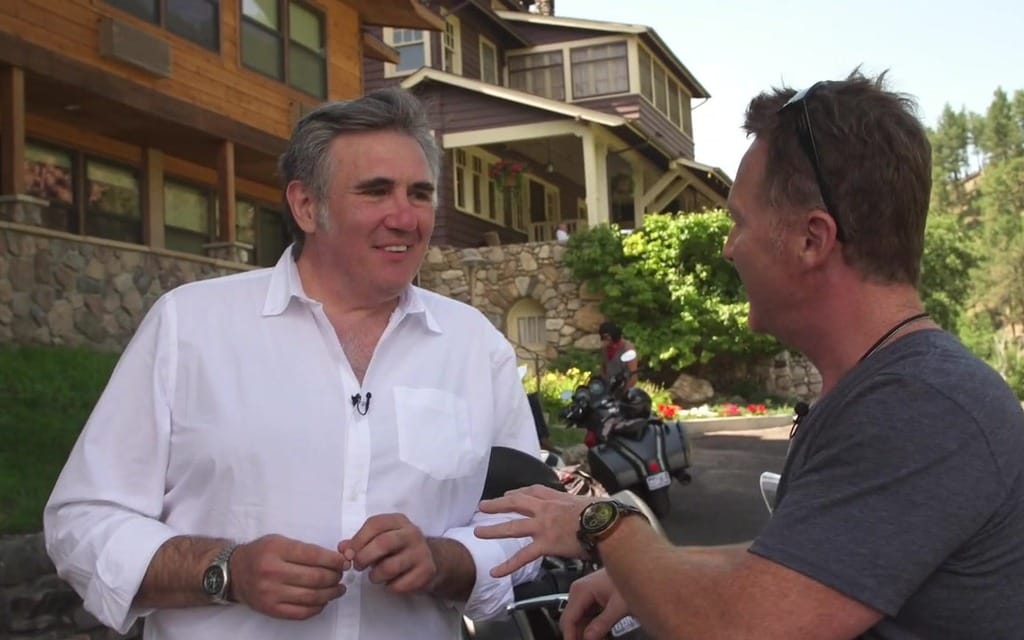 Eric Menard: How long did it take you to design this bike?
Miguel Galluzzi: This bike didn’t take long in terms of ideation but it took us a long time to get an introduction but usually it’s around three to six months.

EM: How does it work when you design a bike? Do you have lines that you imagine? Do you sit at a table for hours? Do you have visions in the morning or at night?
MG: (laughing) I have visions but at other times and for other reasons . . . but, you know, we talked about the bike between us and this time we said « what about going to Bonneville with a California concept bike? » That was the first inspiration in 2014. It had a long and low shape and a fully covered front wheel. It was a long and low bike. Then we toured the states with that concept bike. We went from Seattle to Brooklyn with it to see the reaction of the people. The reaction was huge. What was more important to us was to have Guzzi looking ahead, not in the past.

EM: Yes it’s a very modern bike. The front fairing, the line, the wheels, it’s very futuristic.
MG: Yes. What I like about the futuristic aspect is that it’s a simple and clear statement for a motorcycle. Here in Sturgis , it’s not the case. For Guzzi it’s a natural thing to be simple. It’s one of Guzzi strong statement. Even the materials, the carbon fibre parts wouldn’t have been possible a few years ago but today with the technology and the possibility of having lighter materials, we were able to bring a modern looking bagger bike like this to the market.

EM: What’s the challenge to get from a piece of paper to a finished bike. Do you sometimes have a great idea and then the engineers tell you it’s not possible to make?
MG: I think you’re a good designer when you have something on paper and it goes in production the same way. That’s my philosophy. In this case, 98 percent of the bike is what we had in 2014. The other part is what the manufacturer asked us to incorporate in the bike. Like the bags or the music system. For us in Italy, the audio thing is not popular. It’s a completely new experience, even for the engineers, to understand that in this market it’s important to have it.

EM: Yes, it’s part of the bagger experience to be able to listen to our favourite tunes while riding.
MG: Exactly. For this kind of riding, in these Black Hills mountains, for me two wheels is already okay but music does add to the experience.

EM: What were the simplest things and the hardest things to design.
MG: We had a few challenges. In the prototype we had a completely full front wheel but it wasn’t stable so we figured out a way to keep the full wheel look but make it easy to work with the crosswinds.

EM: Was the 21-inch wheel something they wanted or you just said it needed it ?
MG: No it’s not a matter of wanted it or not. It’s a matter of what we presented. As a designer you have to say, that’s the bike, and if everybody likes it then we have to put it in production.

EM: We often see prototypes in shows that never make it into production but this one seems to me like it’s a prototype that went right to production.
MG: Because that’s the way prototypes are supposed to be. It’s a matter of doing the job. As a designer I can do a motorcycle that I love but I’m going to sell one for me or maybe you. We are not in the business of making art, we are in the business of selling motorcycles to customers. So having that in mind, you have to design a motocycle that’s not only going to be a statement but has to appeal to the public and be produced.

EM: That also has to respect the brand and its history?
MG: Yes, especially with Moto Guzzi because we’re not talking about any brand. Guzzi is going to be 100 years old in 2021. If you go to the Guzzi museum, you understand the history of that brand. There are not many brands who have done so much.

EM: So you have to incorporate that in your design and respect it.
MG: Yes because that brings you forward. If you forget about that you become… whatever. Anything. The Moto Guzzi brand has a tradition but it also needs to be looking into the future. I think this bike reflects that.