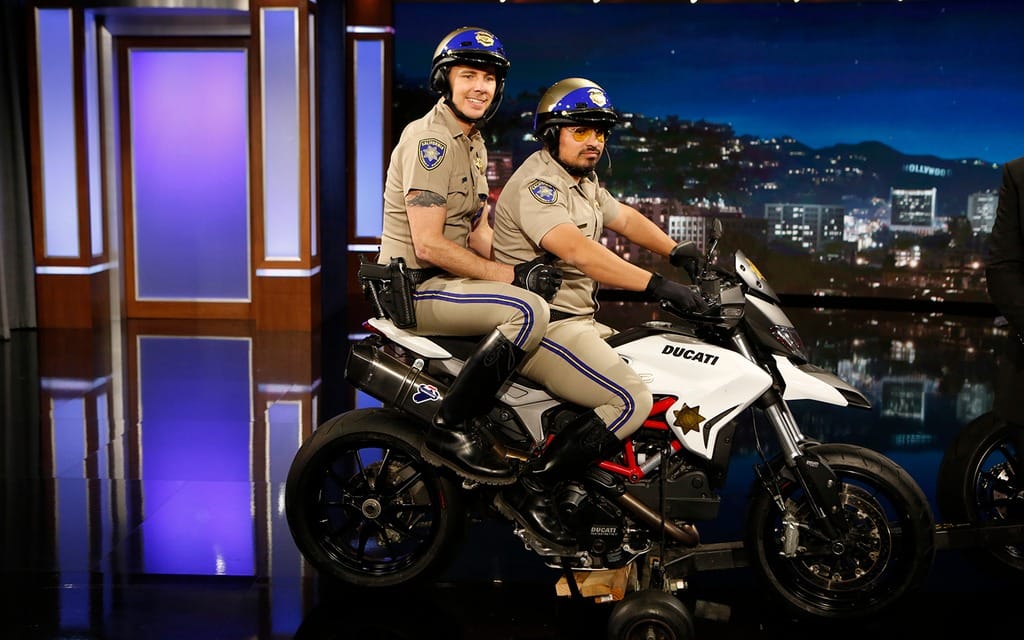 Last night Ducati’s Hypermotard motorcycle made an appearance on the U.S. television talk show Jimmy Kimmel Live, as part of promotion for the Italian brand’s participation in the upcoming feature film CHiPs. In the segment, filmed in Los Angeles yesterday, actors Dax Shepard and Michael Peña rode Ducatis into the El Capitan Theater on Hollywood Boulevard to perform a short stunt promoting the upcoming film. The two Ducati Hypermotard’s used were outfitted to resemble the look of California Highway Patrol motorcycles for the Kimmel taping.

The movie, slated to be released in the US and Canada on March 24, 2017 by Warner Bros. Pictures, focuses on two California Highway Patrol police officers, and is a remake of the popular television show. The film was written and directed by Shepard, who also stars alongside Peña as characters Jon Baker and Frank ‘Ponch’ Poncherello, respectively.

Ducati’s Hypermotard appears in the film as a contrast to traditional police motorcycles. The Hypermotard family is Ducati’s interpretation on the supermotard style of motorcycle that are used on alternating types of racing surfaces. With a high, slender tailpiece and narrow sides, the Hypermotard has a dirt bike-inspired aesthetic and was created to be versatile enough for urban commuting, weekend touring or track day excitement.