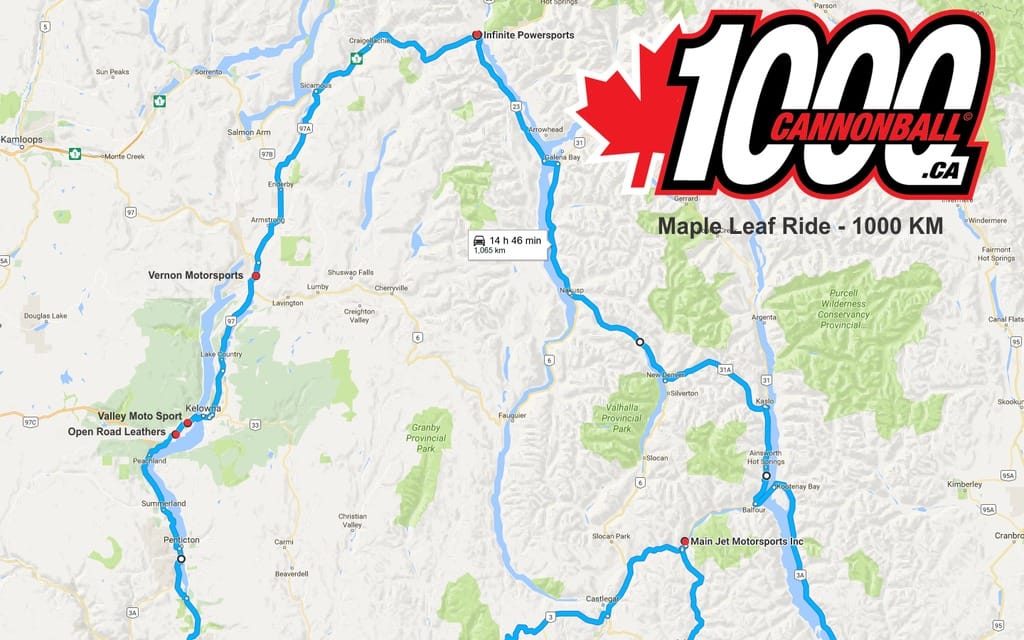 A to P riding event

Cannonball Rides cover the country
It seems odd that what might be Canada’s most geographically complete motorcycling event makes no money for the guy who started it. Or, for that matter, anybody else.

But it is Dave Purdy’s contention that he’s made nothing off the 20,000 or so motorcyclists who have taken part in his Cannonball Rides—that he created the event, figured it out, organizes it, gets dealers involved, and sorts out all the confounding details of a national motorcycling event because it’s fun, that’s all.

Purdy, who runs a company that makes websites for motorcycle, marine, and other kinds of dealerships (Turnkey Web Solutions), says he wanted to bring dealers and riders together in an event that includes more riding and less jawboning. “I used to be in HOG and other groups and I found that most events were not centred around riding; they were social events, gatherings at Tim’s and so on.” And what he calls “club politics” was less fun than you’d think. “I just wanted to ride my bike.”

So he contacted motorcycle dealers he had worked with and set up a ride in Ontario. That was last year, and the first one attracted about 1,250 riders. Since then, he’s expanded the event to include 10 provinces (though, being unilingual, he’s finding it slow-going in Quebec) and, with four rides done across the country by autumn 2016, about 20,000 people have taken part, he says.

The other part of that financial transaction, naturally, is that while he makes no money on it, the participants don’t pay to take part. They can buy a patch proclaiming their victory over hardship and miles if they want (they’re five bucks each and Purdy says the money just about covers the cost of having the patches made and delivered to the dealerships), but other than gas and food, riders are not expected to pay for their participation in the Cannonball 500, the Cannonball 1,000, or—brand new and kind of demanding—the Cannonball 2,500. That’s miles, by the way, and kilometres, too. Because there’s more light in the spring, so the 1,000 is 1,000 miles, and less light in the fall, so the 1,000 is only 600 miles, or 1,000 km.

Purdy says the rides include some of the best motorcycling roads in each province, though what’s best in one might be reviled in another, Canada being the geography of intermittent flat and bumpy that it is. He developed the routes by reviewing other websites, by talking to dealers and riders, and he uses Google Earth extensively. “I’ve done a lot of the rides myself,” he says, although that’s limited to Ontario and British Columbia.

Rides across the country start on schedule — 9 a.m. on Saturday, which allows working stiffs to get home, maybe to unstiff a bit, and then get to work on time. But since each route allows riders to step in at a variety of locations, riders don’t get jammed up with each other at a start line — you get into the route by the closest approach from your home. Riders contact local dealerships to sign up, buy the patch if they want, and receive the needed materials, and they’re expected to finish the ride on time. Purdy uses Google Earth’s recommended driving times as a rough guide to route times for the motorcyclists, working bathroom breaks and the relatively superior speed of motorcycles into the arithmetic.

Given the numbers of participants, it should not be news that a variety of bike types and rider ages are involved in these rides, and Purdy says lots of women get into it. “One guy did 1,000 miles on a Yamaha 125 scooter,” he says. Last year, the rider of a Ninja 400 completed three rides. “It’s about getting out and having fun,” Purdy says. Certainly, for the guy who completes a 1,600 kilometre ride on a scooter, it’s about more than fun, but everyone has their own reason for riding, and fun or not, the Cannonball Rides events provide a good excuse to put some miles, or kilometres if it’s past August, on a bike that may have seen too much of the inside of a garage lately.

The next Cannonball Rides events take place June 10 and 11, with a one-day 500 miler and a two-day 1,000 miler. A new ride, scheduled for June, is 2,500 miles long and will take more ambitious riders into three adjacent provinces from wherever they want to start. Purdy has enlisted support from Joe Rocket and Coast Hotels for his rides.