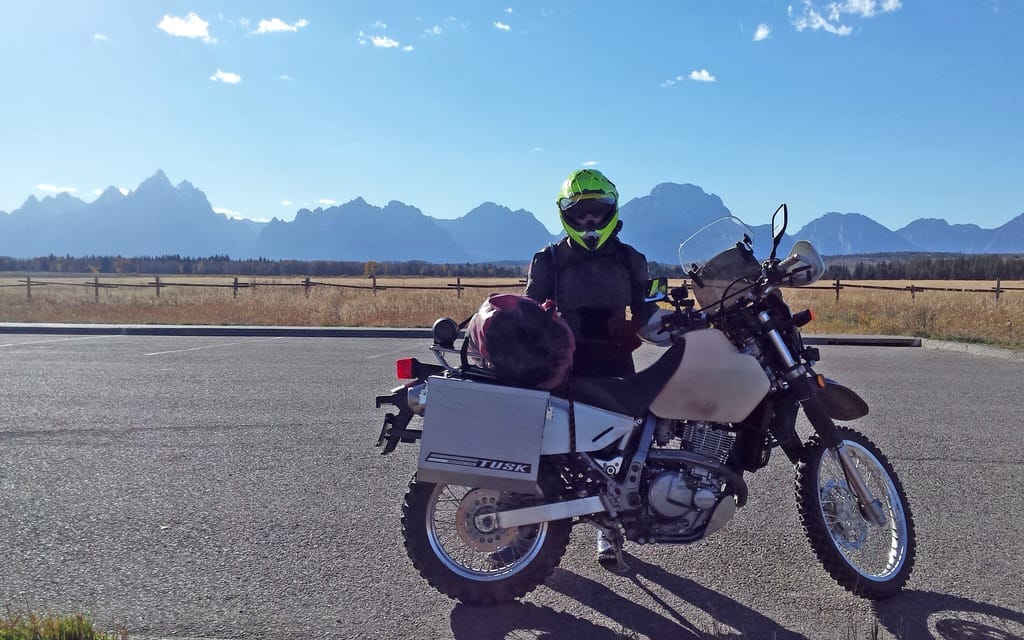 In mid October of 2015, the Teton Pass Highway carried us over Mount Glory and across the border into Wyoming. The road was laden with traffic and we crawled up the smooth switchbacks, rolled over the top of the mountain pass and poured like molasses—Dad on his 2006 BMW F650, me on my 2007 Suzuki DR650—down the other side with flat Wyoming plains stretching out below us for miles.

The vague and hazy shape of the mountains in the distance stole our focus and, after a brief stop in the small town of Wilson to strip off some layers, we were on the road again and headed straight for them. They loomed in the haze of distance as we crept closer on the highway that curved steadily in to the great shadows reaching out under the massive Tetons.

As we drew nearer, it almost felt as if the mountains had snuck up on us, because the foothills you normally expect to see sloping gently up to the base of mountains are absent there. Flat ground stretches on either side of the highway for miles, mottled with short, hardy bushes in huge, sprawling patches. But off to one side of the road, rising out of the earth, the Grand Tetons surge abruptly into the sky as a massive, jagged anomaly. Formidable and majestic, they loom over you even from afar, casting shadows that reach for you like beckoning arms, willing you to come closer. It’s an impulse you’ll find you have if you ever drive this highway.

We split off to follow Hwy 191 North, heading to Yellowstone National Park, and found ourselves on beautiful, gently curving roads that bent and bowed to the landscape around them. The park is, as everyone will tell you, absolutely stunning. So stunning, in fact, that we were too busy ogling the scenery to notice that certain important factors—like time—had moved on without us.

Halfway through the park and late in the afternoon, my dad, who was riding behind me at the time, suddenly pulled up beside me and motioned for me to pull over.

“I’m almost out of gas,” he said the second his helmet was off.

It was at this time that we also both noticed that the sun had fallen well below the trees around us and had dragged the temperature with it.

It took about two minutes looking over the park map to realize his bike would not make it to any of the very few gas stations throughout the park. With no other options, we started backtracking for the closest one but it was less than half an hour later that we had to slow to a 30km/h crawl to avoid the elk starting to amble onto the roads.

By then it was pitch dark, we were both very cold—and very tense due to the 800 pound hazards walking along the roads—and Dad’s BMW was running on fumes.

I can’t remember if it was the plan all along or if he just decided to turn off the main road because it made little difference either way, but regardless, we turned off, puttered around a stand of trees that was, thankfully, free of any elk and their giant, spiky horns, and suddenly there was a huge, sprawling hotel, complete with hundreds of lit windows and a bustling parking lot full of cars and people.

I remember actually exclaiming “Wow!” in surprise when I came around the corner because we’d seen nothing but elk and a few cars for hours and suddenly there was this bustling little area full of people in the middle of absolutely nowhere.

We pulled up to the main entrance and I knew from a glance that this was not a place we could afford to sleep in (I later found out it was called the Yellowstone Lake Hotel). But I was cold, tired and hungry and I told my dad I’d pay whatever they wanted if it meant I could sleep in a bed instead of a tent. After a brief argument, in which my dad pledged to sleep in the dirt and freeze to death before he spent $300 for a room, he went in and found a cabin for $150. Upon entering the cabin, the heat was immediately turned to its highest mark, and there were hot water and a shower and real beds. It was the best sleep I got the whole trip.

When we woke up the next morning, there was frost on our bikes. We packed up and set out once more and now that it was full daylight, the unique features of Yellowstone Park—and the reason it draws so many people—were suddenly visible to us.

As we followed more of the gently winding roads we could see steam rising from within the tree-covered hills around us, billowing sluggishly into the air. We couldn’t help but stop at a roadside attraction and information area where several geysers were clustered together.

The first thing you notice is the smell. A sickly, cloying, rotten onion stench that clings to the back of your throat like tar and makes it a little difficult to fully focus on the natural wonder that is the boiling streams and volcanic mud around you.

We lasted about 30 minutes before we had to leave because we both felt nauseated and headed north, out of the park. I would readily return to Yellowstone in a heartbeat and for anyone toying with the idea, it is absolutely beautiful. You could easily spend a week there, driving through the roads and taking your time to see all the natural beauty Yellowstone has to offer.