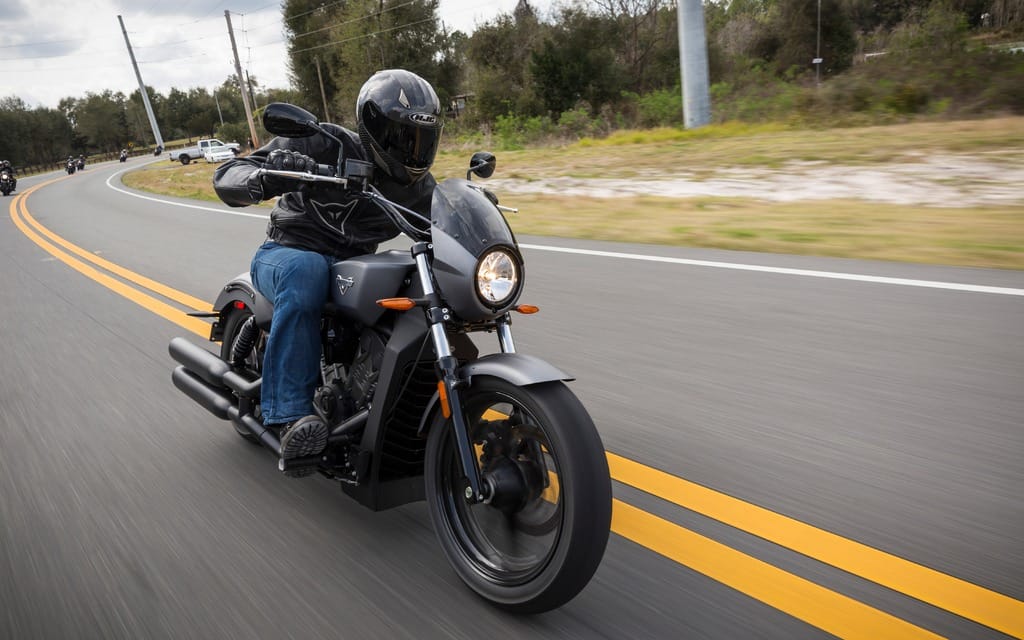 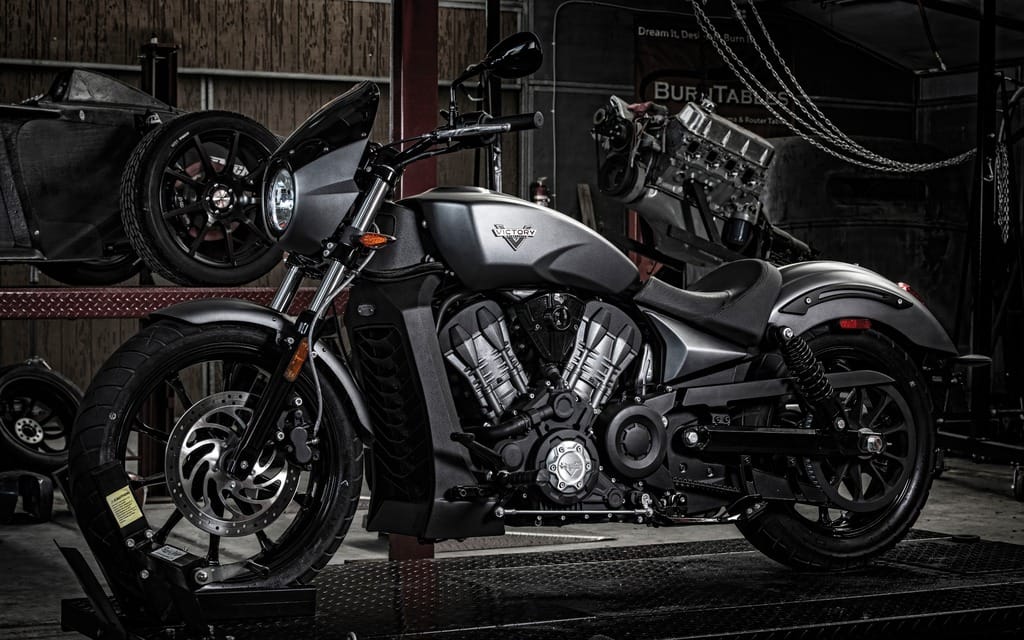 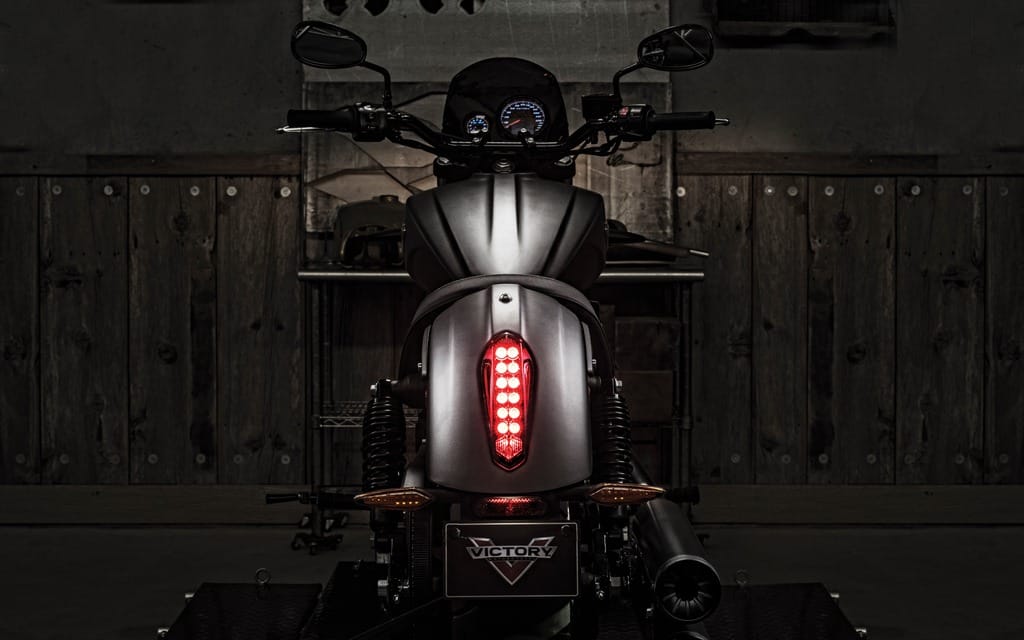 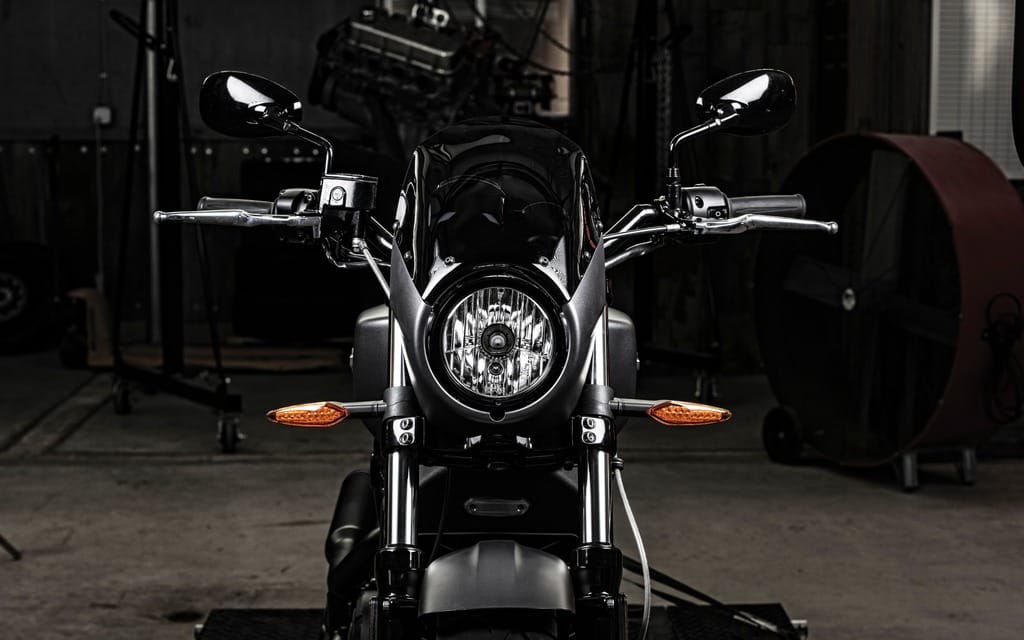 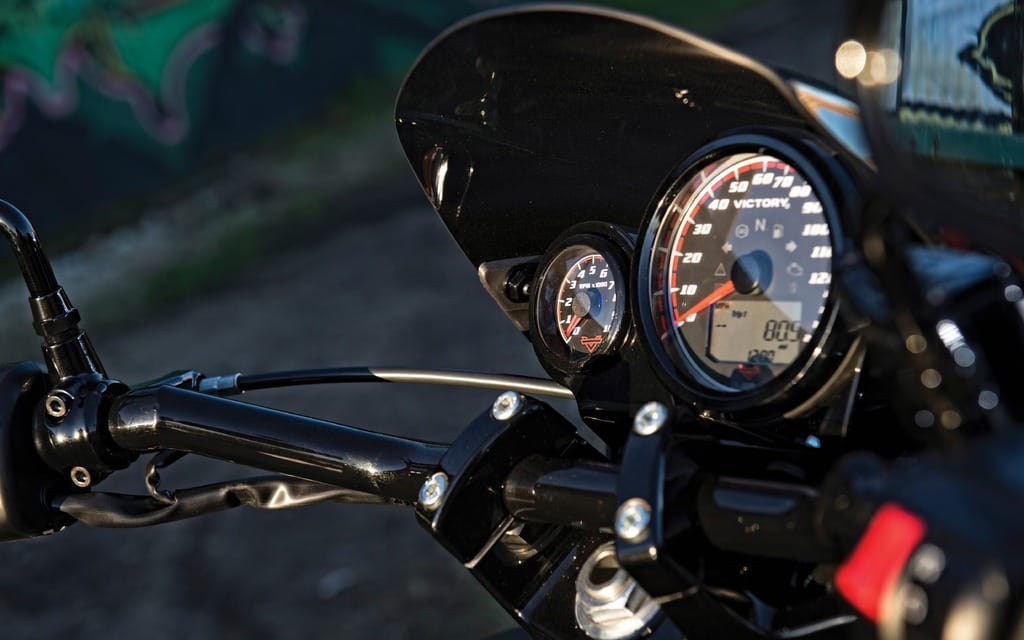 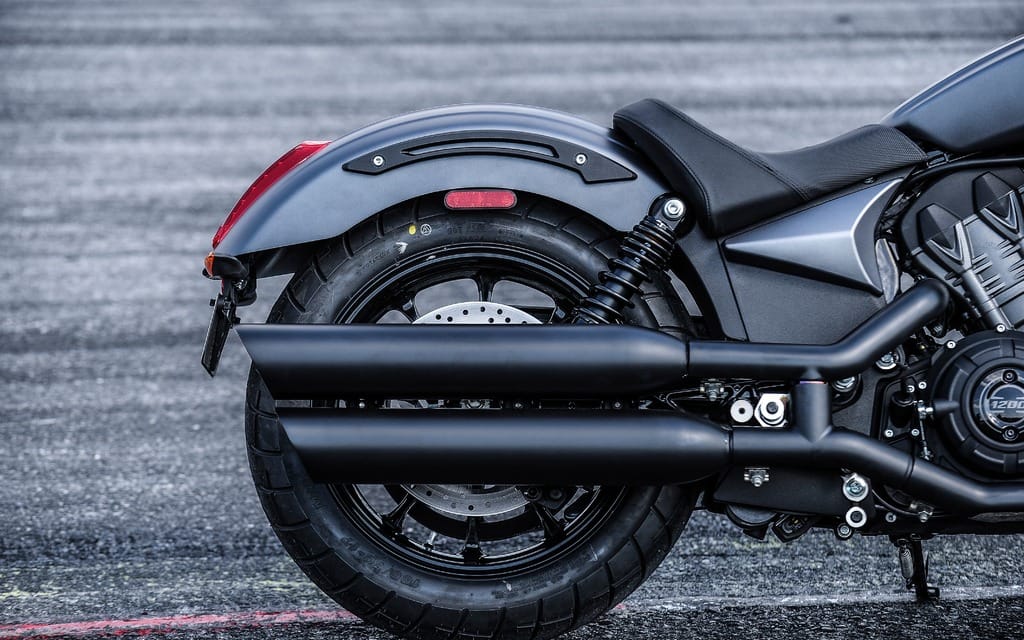 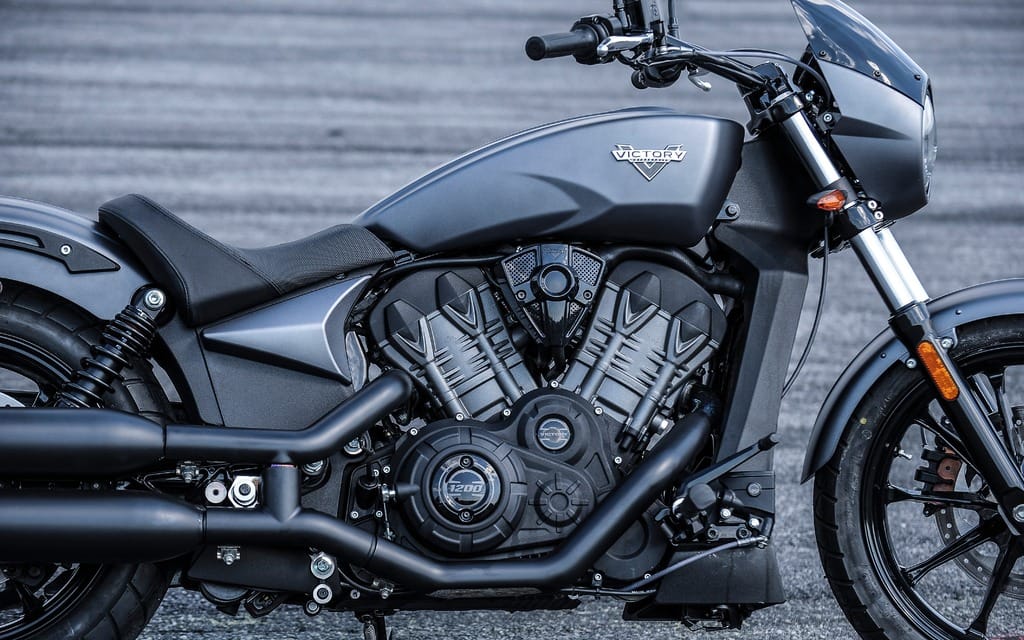 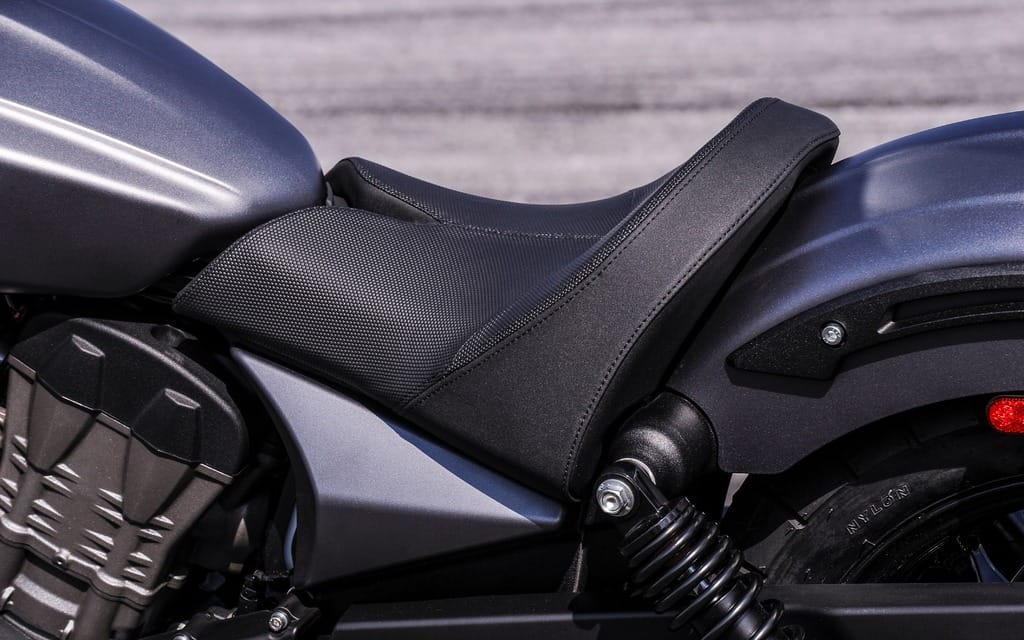 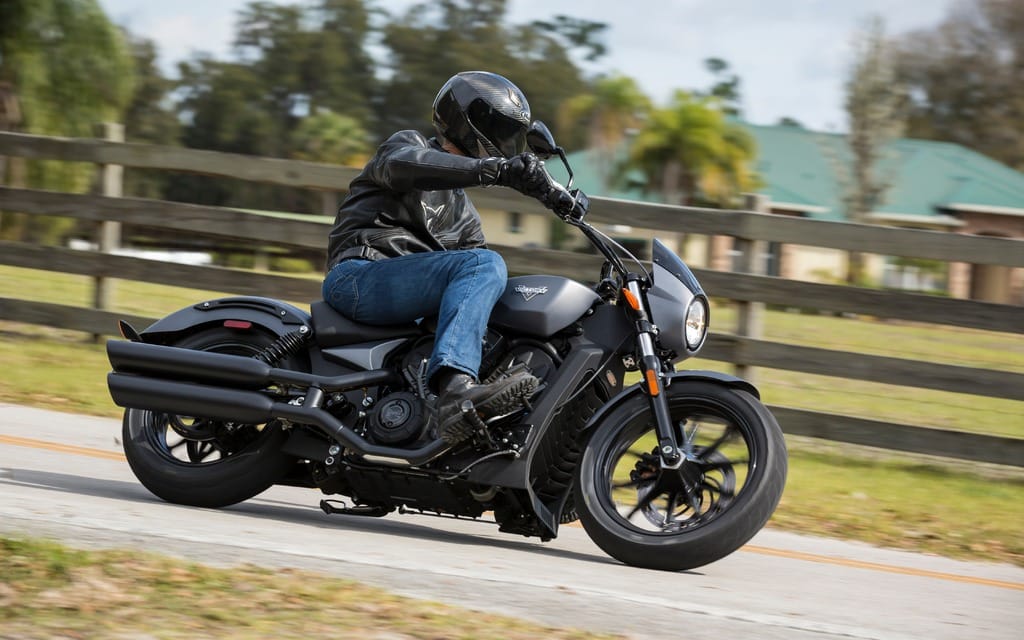 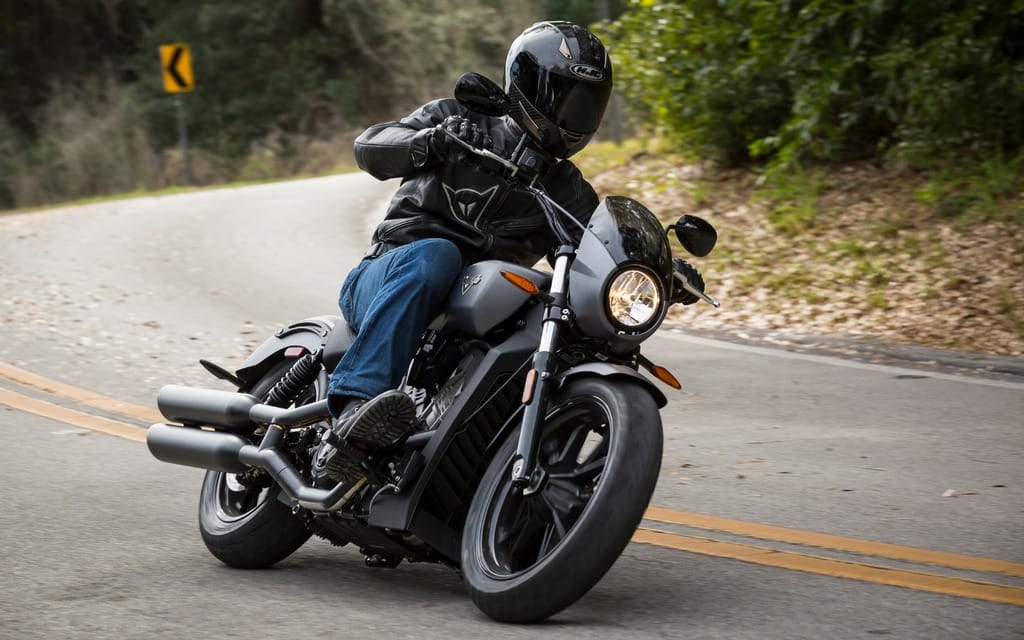 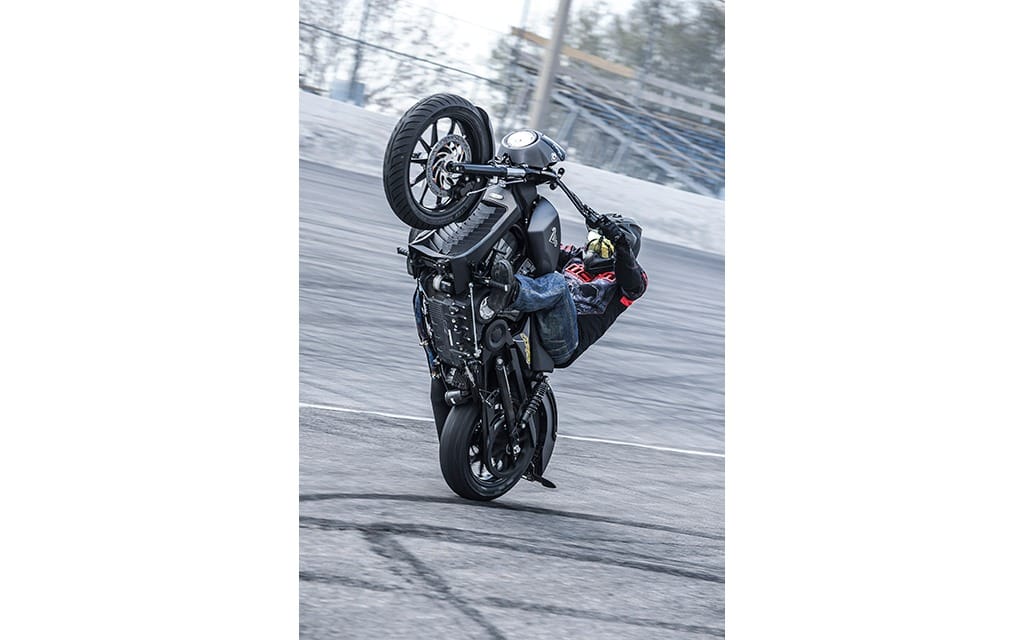 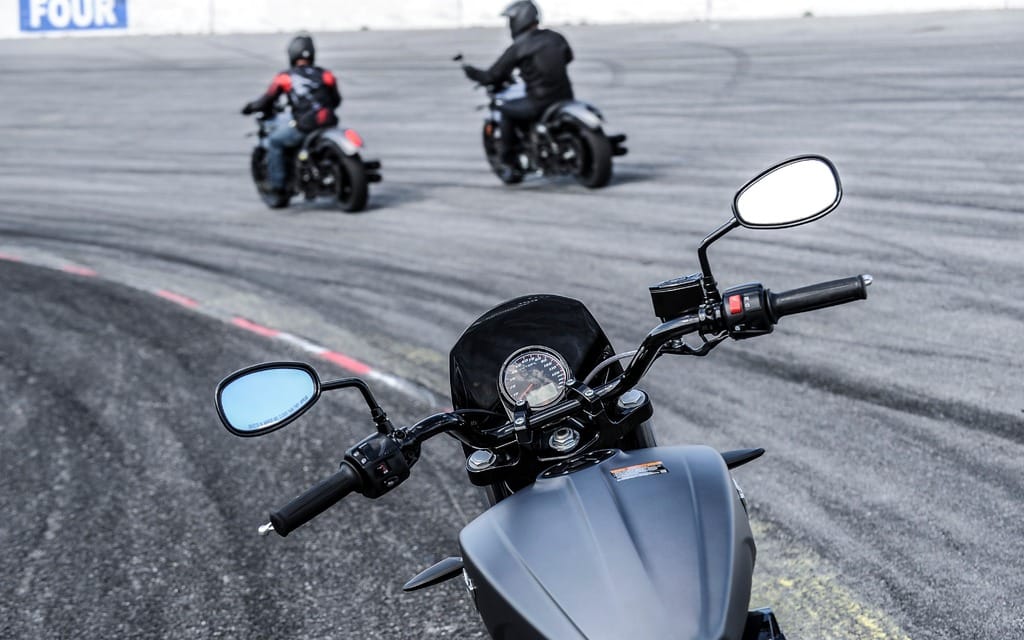 Victory’s musclebike impresses, but don’t trust those tires
Victory didn’t hold back with the publicity when introducing its latest and most sporty V-twin. The sales brochure explodes with phrases like “Modern American Musclebike,” “Power To Burn,” and “Raw Adrenaline” about a machine that “delivers a level of performance and excitement previously unknown to American V-twin motorcycle riders.”

Hence an inevitable sense of disappointment — and a volley of abuse from online keyboard warriors — when the Octane was revealed looking distinctly like sister brand Indian’s Scout, which has very similar performance and was described as an entry-level model on its introduction in 2014. Perhaps more to the point, the Victory’s claimed maximum output of 103 bhp means it’s about 10 bhp less powerful than a certain American rival’s 15-year-old V-Rod.

But the Octane is feeling pretty aggressive as I perform a smoky burn-out at the Daytona Beach drag-strip, then blip the throttle repeatedly while inching forward to the line. The Christmas tree flashes green, I let out the clutch with the revs near the 8000 rpm maximum, and the Octane leaps forward, leaving a black line with its spinning rear tire as it trundles down the strip, hitting 173 km/h a quarter of a mile and just over 12 seconds later.

Alright, so at that point there’s only about 30 km/h to come before reaching its top speed, but those drag-strip runs confirmed that the Octane can generate some adrenaline. And not just in a straight line, because we’d spent the previous half-hour aiming it round a coned course with one footrest or other on the ground most of the time, and a stop-watch running. All part of parent company Polaris’s attempt to position Victory as the sporty American brand, leaving the heritage and nostalgia to Indian.

Of course the reason the Octane resembles the Scout is that it shares its basic design, including the layout of the liquid-cooled, 60-degree, dohc eight-valve engine. Sixty-five per cent of components are new, according to Victory, although many of the changes are merely cosmetic. Rather than one model being developed from the other, they were conceived together and launched 18 months apart largely for marketing reasons, according to Steve Menneto, Polaris Vice President of Motorcycles.

The engine uses two-mm wider pistons to give dimensions of 101 x 73.6 mm and capacity of 1179 cc, against the Scout’s 1133 cc. Combustion chambers are reshaped, compression is up fractionally to 10.8:1, and the cams are slightly hotter. The result is a peak output of 103 bhp at 8000 rpm, an increase of three bhp on the Scout. The bottom end is unchanged but the belt-drive transmission’s larger rear sprocket gives seven per cent shorter gearing, boosting acceleration.

Chassis layout follows the Scout in combining tubular steel with cast aluminum sections at front and rear. The rear section angles the twin shock units slightly more vertically. Like the 41-mm forks these use slightly stiffer, dual-rate springs, with damping revised to suit. The cast wheels come in 18-inch front, 17-inch rear diameters instead of the Indian’s 16-inchers.

Styling is very like the Scout’s with the addition of a bikini fairing, plus generally grey or black finish to the engine, matching the grey that is the only paint colour. Fenders are slightly smaller than the Indian’s; the shotgun silencers are slash-cut and finished in black rather than chrome. The view below the fairing is of a single, round speedo console that incorporates a small digital tacho.

Ergonomics are essentially unchanged, the pulled-back handlebar giving a typical cruiser riding position in conjunction with forward-set footrests. The single saddle is finished in black plastic rather than brown leather, and remains a knuckle-dragging 673 mm off the ground (although confusingly Victory list a different “laden” figure, with a rider of unspecified weight compressing it).

Straight-line performance is much like the Scout’s, which is to say respectably quick and impressively flexible, with perhaps a slightly stronger kick at the top end due to the bigger bore, and a subtly livelier feel at lower speeds due to the shorter gearing. The bike was quick enough to be fun on the mostly straight roads around Daytona, staying smooth until it began to tingle slightly above 6000 rpm.

On the highway the Victory was still smooth at 110 km/h despite its shorter gearing, its small fairing taking a bit of wind off my chest, but the typically crunched-up cruiser riding position eventually got a bit painful on my back. There’s 120 mm of travel up front and just 76 mm at the rear; not a lot but as much as many cruisers deliver. Big bumps go straight to your spine, so avoid them if possible.

The Octane was much more fun at the drag-strip, where as well as trundling down the quarter-mile and dodging the cones it showed its ability as a stunt bike, helping most of us perform a few rolling burn-outs (though we didn’t replicate the sideways drifting of Victory stunt duo Tony Carbajal and Joe Dryden). This bike is a long way from being a true muscle cruiser like Ducati’s 156 bhp XDiavel but it’s quick enough to be entertaining.

There was also some fun to be had on twistier roads, because the Octane handled pretty well. Florida doesn’t have an abundance of corners but we eventually found some in the Ocala National Forest, west of Daytona. At 243 kg dry the Victory is hardly a lightweight even by cruiser standards, and with 29 degrees of rake its steering geometry is no steeper than the Scout’s although its front wheel is 18 rather than 16 inches in diameter.

But its wide handlebar gave enough leverage to get the bike changing direction without much effort. And the Octane’s redesigned aluminum front frame section allowed an extra degree of lean angle on either side, giving sufficient ground clearance for reasonably enthusiastic cornering, by cruiser standards at least, before the pegs touched down.

Unfortunately braking performance was much less satisfactory, particularly with the U.S.-market launch bikes, which weren’t fitted with ABS. The problem was not the brakes but the Kenda tires, whose lack of grip was useful when the rear was performing a burn-out but less welcome when the front was needed to help slow the bike. Although the front stopper is just a simple 298 mm disc with twin-piston caliper it had way too much power for the tire, even on dry roads.

The result was that during two days’ riding three riders crashed at slow speed after locking the front wheel. Damage to riders and bikes was minimal, but the drawback of cheap rubber — and the advantage of ABS, as fitted to Octanes in Europe and some other markets — was obvious. Anti-lock brakes or not, anyone buying this bike would do well to insist on a tire upgrade before leaving the showroom.

Thankfully Victory’s economy drive didn’t seem to have affected other areas including build quality. Most impressive was the Octane’s transmission system, which shrugged off a huge amount of abuse, especially at the drag-strip, where all the bikes survived a morning that would have put plenty of others out of action with fried clutches.

All of which suggests that the liquid-cooled Polaris V-twin engine is strong enough to cope with considerably more horsepower, as did its use (albeit in modified form) as the basis for the Project 156 racer that competed in last year’s Pikes Peak hill climb. That in turn adds to the sense of disappointment that Victory’s engineers didn’t give the Octane a few more horses with which to back-up those brochure brags about muscle, power and adrenaline.

Still, hopefully the Octane is just the first of a new breed of Victory cruisers whose performance will eventually live up to the hype. And meanwhile this moderately powerful machine is perfectly capable (tires excepted) of keeping plenty of riders happy, provided they’re not expecting too much speed. Better still it’s reasonably priced, costing slightly less than the Scout in most markets. Anyone planning two-up riding will need to add a pillion pad via the accessories catalogue, which also includes flatter and higher bars, a tacho, remote-reservoir shocks and slip-on silencers.

The Octane might not deliver unprecedented performance and excitement, but it sets Victory on a new path and confirms that the Polaris group’s platform engineering has the potential for some exciting stuff in the future. Let’s hope the firm’s copywriters have kept a few superlatives in reserve for when they really need them.

Steve Menneto, Polaris Vice President Motorcycles
“We’re growing very fast at the moment — 67 per cent last year, which is a ‘Holy Cow!’ rate of growth. In the next three to five years our goal is to get to a 20 per cent share of the heavyweight [over 800 cc] cruiser market in North America, and 15–20 per cent elsewhere.

Is there any reason why in 10 or 20 years we can’t be at 50 per cent market share? In a business plan if you write that down, you know you’ve got to do some crazy things, right? But when I first started at Polaris way back in the ’90s we were selling ATVs and we were a 17 per cent player, and Honda was like a 30 per cent player and way ahead of anybody.

“But you just chip away at them little by little, and now we are the biggest player with ATVs in the world, and a dominant player in side-by-sides. We understand what it takes to build a business, get to that 20 per cent share plateau, because then it makes financial sense to reinvest and grind away and keep going. When I first took over with motorcycles we were at three per cent of Polaris; now we’re at 13 per cent. But the opportunity is what we have our eyes on — we have an opportunity to become a lot larger.

“The versatility of our power train in particular allows us to do a lot more things. When you look at Europe, there are some market segments that we don’t play in that I think we now have assets so we can go and play. We don’t talk about future plans but we know there are opportunities there.

“Our Scout and Octane projects began together; neither one preceded the other. From day one it was always the plan to share the platform. When we started doing our engineering on it we wanted to get the right platforming strategy. That gives us the authority and buying power and economics; it’s no different when you look at Volkswagen and Audi and Porsche.

“The difference between cars and motorcycles is that the auto-makers are able to hide the platform behind sheet metal. In motorcycles the jewel is the power train, and some of the things are exposed, so that’s a challenge. The trick is to platform the stuff that doesn’t really concern the consumer.

“Right now we have an overlap [between Victory and Indian] but we have different branding, so we’re playing in similar segments. As we move to other segments you’ll start to see more separation. When you look at Project 156 [the super-naked Pikes Peak racer], we’re really trying to look at the opportunities there, and move as quickly as possible.

“Would we compete with Ducati in future? Eventually those brands will be our competitors, when we enter the market in a different fashion, with a different product. They are very good competitors and we will not take them lightly. We understand the consumers very well, and they would not accept anything less than the highest quality product. So when we move we’ll move with the best we can put out — and it will be highly competitive.”