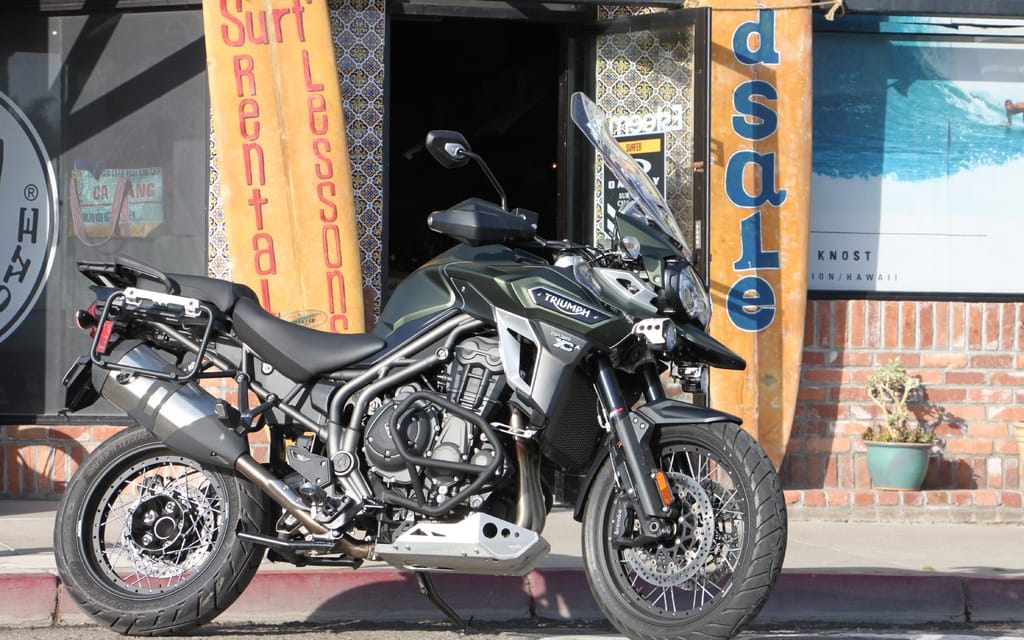 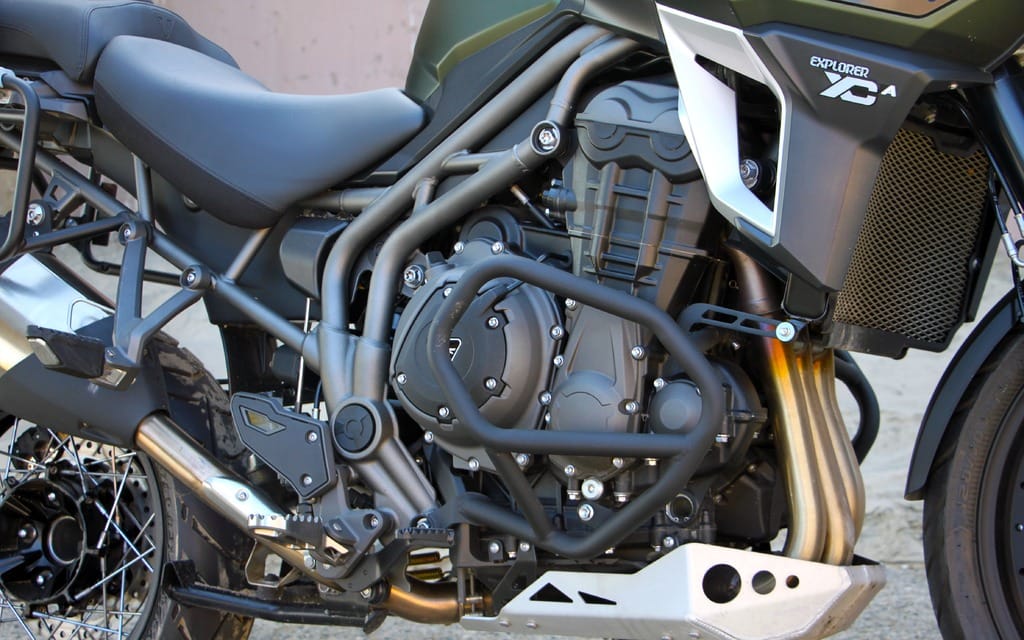 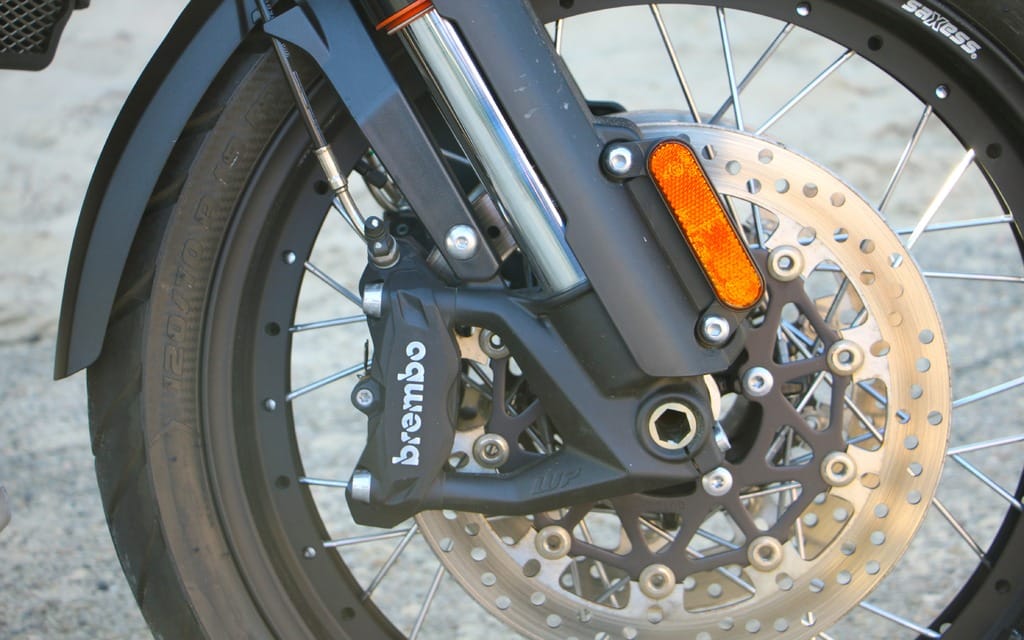 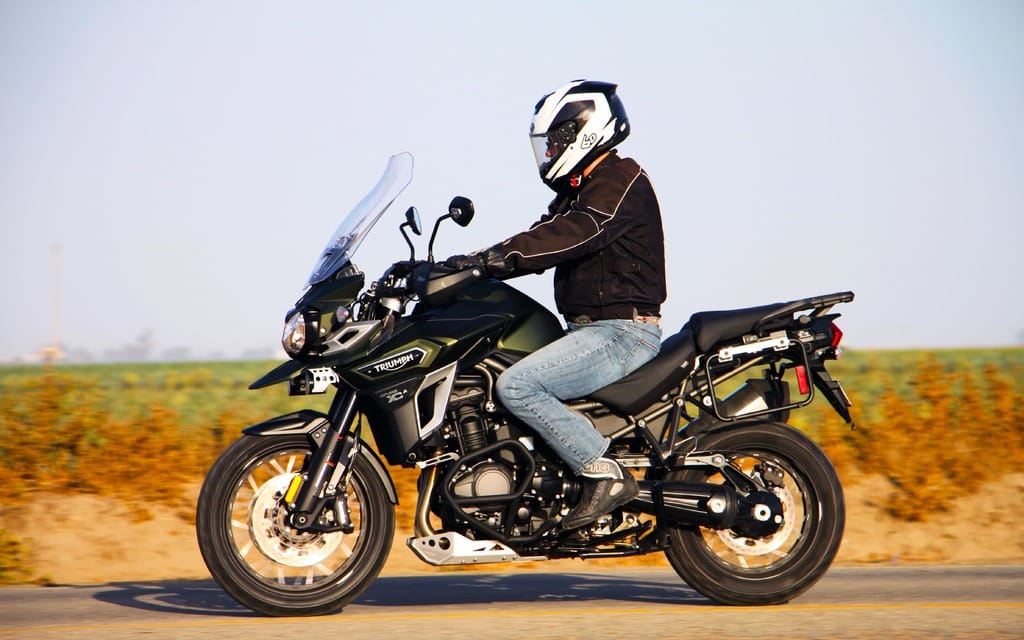 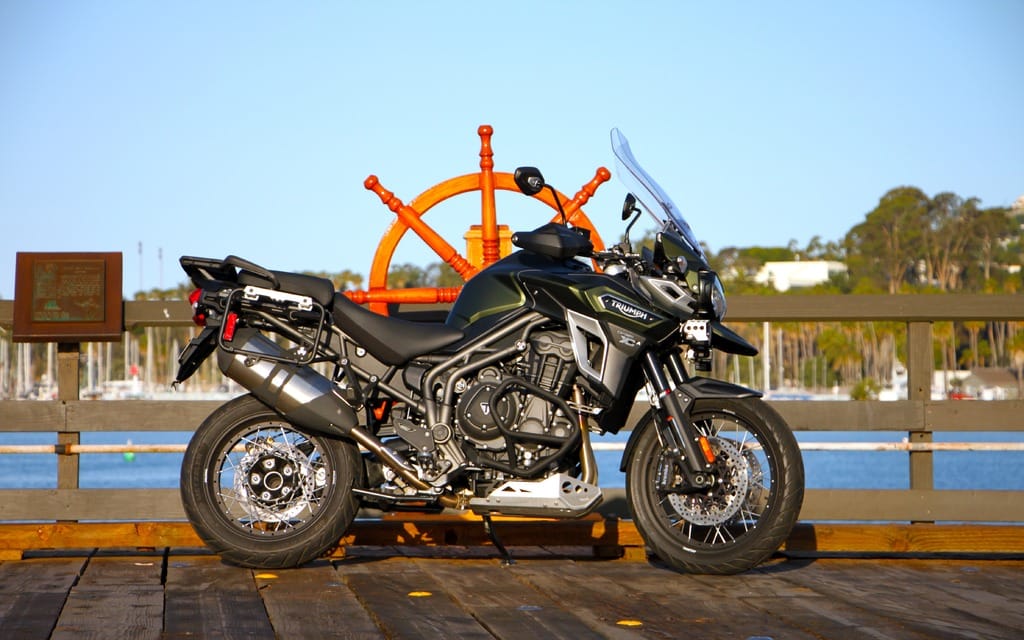 A little portly for off-road thrills, this British ADV pampers on pavement
It’s no mystery that the adventure touring bike is motorcycling’s answer to the sport utility vehicle. Both are styled like dirt donks, promise carry-anything, go-anywhere versatility and, though for different reasons, both suffer a little derision from their mainstream counterparts. Even their accessories — huge ’roo bars for sport brutes, elaborate crash bars for ADVs, outlandish lighting for both — bear a marked similarity.

Oh, and they share one more trait. Just like an SUV, there’s a wide range of off-road abilities from the truly incredible — virtually everything wearing a Land Rover badge — to the minimal — pretty much every sport cute not made by Land Rover. So, while Honda’s CRF1000 Africa Twin — which Cycle Canada just tested in its June issue — is more than happy to sling mud and pound whoops, something like Triumph’s Tiger Explorer, though thoroughly revamped, has about the same off-road nous as a Honda Pilot.

That would seem, considering the dirt bike styling and the aforementioned pretensions to versatility, to place the Triumph at something of a disadvantage. But, in the final correlation to the automotive SUV segment, it turns out that precious few ADVs ever really set knobby tire to terra (in)firma. Instead, most see duties as somewhat more utilitarian — there’s that parallel again — touring bikes, their dirt bike riding positions just as comfortable as dedicated tourers and their off-road lineage (in some cases, supposedly) making them a little lighter than traditional touring bikes.

Such is Triumph’s Explorer, possibly the best long-haul tourer of all the large adventure bikes. Its 1215 cc three-cylinder engine is a model of civility and torque, the seating position supremely comfy and its long, 32,000-kilometre major service intervals the stuff that makes Iron Butt riders salivate.

But, then, the Explorer has always done all of the above. So what’s supposedly all new for 2016?

Certainly not the look. Triumph says that most of the bodywork is changed and, yes, the front bill is a little more aggressive. And, if you want to get technical, there’s new ducting to the tank panels. But, park a 2015 model and the new 2016 side-by-each and their silhouettes are unmistakably similar. The handlebar is new and the seating positioning modestly altered, but, again, at first glance, even current Explorer owners (I met a few in my meanderings round sunny California) are at pains to notice the difference. So, again, what’s all the hub-bub about a supposedly all new Tiger?

First and foremost, there’s a new electronically adjustable White Power suspension. With nine positions available — Comfort, Road and Sport and intermediate levels between each — Triumph boasts its Semi-Active Suspension (TSAS) offers damping to suit pretty much everyone’s taste, size and destination. It’s a smart system, using something called an Inertial Measurement Unit to constantly update the damping circuits. So, rather than simply set-it-and-forget-it electronically adjusting the damping — as you might manually, using the “klickers” common to most modern forks and shocks — Triumph’s TSAS is constantly modifying damping on the fly according to the bike’s pitch (acceleration and braking) rate, yaw (turning) and roll (leaning) rates. In other words, even within each of the Comfort, Road and Sport basic setups, TSAS is continually optimizing the suspension — 200 times a second says Triumph — firming up the rear shock’s compression damping, for instance, under hard acceleration even if the rider has selected the Comfort base setting.

Comfort, as one might expect, is fairly plush while Sport is firm enough for serious corner carving. Like other electronically adjustable damping systems, it changes the personality of the big Tiger from big cushy land yacht to something approaching a sport bike. Indeed, a large part of the 2016 Explorer’s increased versatility can be found in the vast range of suspension settings now available. Previous versions were plenty comfortable on the open road; thanks to TSAS, it’s now more competent when said road gets twisty or muddy.

That said, I think the XCa could easily do with just the three basic positions. While there were distinct differences between Comfort, Road and Sport, the intermediate steps were almost too nuanced to discern. While the rider of a track-intended litre-bike might need such subtle differentiation, most Explorers will never need the subtle gradations the intermediate positions offer. I suspect their inclusion has less to do with rider benefits than with Triumph’s suspension gurus, like all engineers, simply not being able to resist all that newfound computing power.

As much as I appreciated the cushy ride, however, what truly piqued my interest was the rear suspension’s electronic self-leveling function. Essentially, a swingarm position sensor maintains a constant ride height, electronically adjusting preload to suit. In other words, load up the Explorer with passenger and luggage or just ride solo, it makes no difference; the XCa automatically adjusts the ride height so it always remains the same. While the variable damping is sure to be the Explorer’s calling card, I suspect that, in the long run, ADV riders, notorious for loading their bikes up to the gunwales, will find themselves appreciating the self-leveling feature even more.

Nor is that the end of the electronic trickery. The engine output, throttle response, traction control, and ABS are also computer controlled, the Explorer offering Sport, Road, Rain, Off-road, and Rider modes, all again controlled by the aforementioned IMU according to lean angle and acceleration.

The mode distinctions are fairly self-evident, the Sport offering the big triple’s full 139 horsepower, the sharpest throttle response and less intervention from the traction control and ABS systems. Road tones down the throttle response — but not the power! — a little. Rain, meanwhile, dampens it even more and even cuts the horsepower to a maximum of 100. Off-road, on the other hand, optimizes the traction control system for loose terrain and disables the rear wheel’s ABS (but not the front), locking up the rear tire being a necessary dirt bike attribute. Rider mode, meanwhile, allows you to mix and match any of the above settings. Making things even more complicated, altering the ride modes again alters those aforementioned suspension settings. Yes, it can be a little confusing!

Indeed, rather than get caught up in all the permutations and combinations, I just left the damned thing in Sport whenever I was riding solo, maximizing every erg of energy the 1215 cc triple had, and then switched back to Road whenever She Who Must Be Obeyed was onboard, Herself finding the Sport mode’s touchy throttle a little unsettling. The difference was noticeable, the alteration appreciated (happy wife, happy life).

The electronic gadgetry, however, was a source of serious ire. For one thing, the interface is a little finicky in use, it being difficult to perform the changes on the fly. It wasn’t a big thing, especially considering how few times one actually changes suspension damping or throttle response. More damning, however, was Triumph’s decision to include the XCa’s new — and very effective! — adjustable height windshield controller in the digitized interface. Adjusting a windshield is most definitely something that is often done on the fly and rendering it in any way more difficult to modulate is a major faux pas. Why bother with a complicated computer interface when the industry standard toggle switch used on virtually every other touring bike is so convenient. I suspect that Triumph will get enough complaints about this that there may be a running model update.

That said, comfort is still the Explorer’s strong suit. The wind protection is decent, the lack of turbulence off the windshield even better. Though the seating position is a little more sportbike canted than previous models, it is still quite comfortable. The seat is broad and flat, both attributes appreciated by old bony butts. It’s even heated — with individual, two-position controls for rider and passenger! — also much appreciated since coastal California spring evenings can get a mite chilly, at least in early May. And my significant other very much appreciated the Triumph’s elevated seating of the passenger portion — I also had the rider’s portion in the lower of its two positions — allowing her a more interesting view than the back of my helmet.

The one criticism usually directed at the Explorer is that the engine is boring and unexciting. Quite how 139 horsepower is boring and unexciting is beyond me. It would seem that such low regard is the faint praise one gets for making a very powerful engine so thoroughly controllable. Indeed, the big Triumph has virtually no powerband per se; if the engine is on, there’s more than ample torque. The twistgrip might as well be a rheostat, so linear is the throttle response.

That’s not to say it’s not powerful. It may not be as overwhelming as the 160 or so ponies KTM and Ducati bandy about for their ADVs, but the Explorer’s 139 horsepower and 91 pound-feet of torque are way more than enough to accelerate one 258 kilogram motorcycle, its rider, a passenger and, if they just spent a couple of weeks travelling in, say California, their gear, with more than enough alacrity. Seriously, if you need more performance than the Explorer offers, just be done with it and buy a sport bike.

In the end, the 2016 Explorer’s major weakness — like its predecessor before it — is its off-road bona fides. For one thing, there are those aforementioned 258 kilograms — some 47 kilos more than Honda’s CRF. It’s a heavy beast and, worse yet, much of those additional 103 pounds is carried up high. Suspension travel — 190 millimetres from the 48-millimetre inverted fork and 193 mm for the monoshocked rear — is also less than the Honda’s. And though the XC’s spoked wheels — there’s a “street” oriented XR with cast wheels — supposedly render it more off-road oriented, the front is a more street oriented 120/70R19 compared with the Honda’s motocross-ready 90/90-21 front knobby. Yes, you can venture off-road on an XCa but, unless you’re Bob Hannah, you’ll be tip-toeing over anything more treacherous than a cottage road.

But then, as I said at the beginning of this road test, we knew that going into this evaluation. What the 2016 version offers, then, is an even more comfortable and capable version of the bike that was already the best tourer in the ADV segment. The Tiger Explorer may not be the sportiest or the most off-road worthy large ADV, but it is the most comfortable, now even more so.

Triumph’s pricing for the Tiger Explorer starts at $18,200 while the range-topping XCa retails for $22,900.