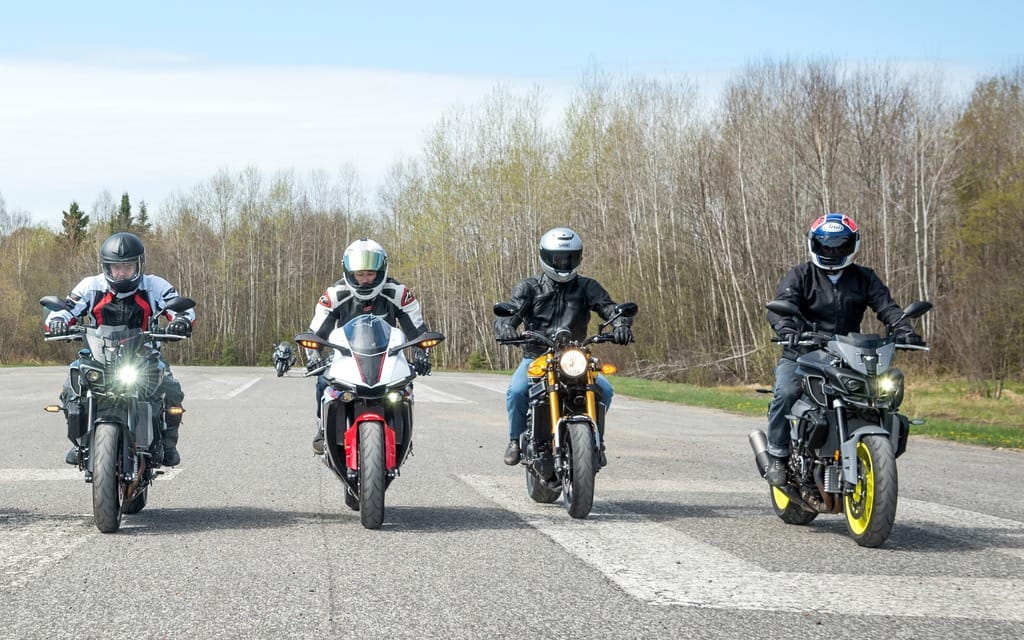 Three more sporting Yamahas unleashed at Yamaha Canada intro in Huntsville
Unlike the FZ-10, the three other models trucked to the Deerhurst resort in mid-May were 2016 Yamahas. The pack of journalists was given plenty of opportunity to ride each, and took advantage of that on the serpentine roads around Huntsville, Ontario, as well as at the makeshift drag strip.

The YZF-R1S, SXR900, and FJR1300 ES are all new, but each is based on existed Yamaha motorcycles, though there are some significant differences.

YZF-R1S
The R1S is an utter jewel. In my view, it’s the most beautiful of the new bikes we saw and gives up nothing to the Italian marques, with cleanly sculpted, flowing lines, gorgeous paint, and a lithe body shape. It’s also reasonably comfortable. Although I rode it only at the airstrip, I found its seat-bar-pegs relationship more comfortable than I expected, and its wonderfully potent engine easy to manage. In other words, for the rider, it’s an unintimidating but deeply exciting superbike. John Bayliss (quoting Yamaha scripture) said the R1S is “the most streetable of the R1 series of bikes.” It shares many engine features with its track-oriented siblings, including the chip-controlled throttle and chip-controlled intakes, “which means the intake funnels in the airbox actually move,” titanium intake valves, and 42,000 km valve adjustment intervals, and differs in several ways: the crossplane crank is a little heavier, connecting rodes are steel rather than titanium, the engine covers are aluminum with steel bolts (R1 has magnesium covers and aluminum bolts that are “good for exactly one tightening”), and the exhaust headers are stainless steel, rather than titanium (the silencer is titanium). All the ride controls—power settings, traction control, slide control, lift control, and launch system—but the quick-shift system is an optional addition. Brakes are race-spec ABS and linked. Wheels are more user-friendly aluminum, rather than magnesium. At 203 kg wet, it’s four kg heavier than the R1, and with about 188 claimed horsepower, the R1S makes four horsepower less. In white-red-black (prettier, in my opinion), and mat grey, both for $16,699.

SXR900
I spent plenty of time on the SXR900 on the twisties around Huntsville (even dodging a wandering moose at one point), and found plenty of reasons to like it. With about 115 claimed horsepower and 64 lb-ft of torque, its output is three-quarters of the FZ-10’s, but it’s 15 kilos lighter (195 vs 210 kg) and feels more nimble and about as quick: snap the throttle on the SXR and it lunges like a rattlesnake. At $10,699 in brushed aluminum and mat grey, and $10,999 in 60th Anniversary yellow and black, the XSR is significantly less expensive than the FZ-10. Bayliss said the cheaper grey XSR is outselling the other, but that extra $300 is worth it—the black-and-yellow model is a standout. The XSR is also Euro 4 compliant (as is the FZ-10, but not the others), which could become a big deal. It was developed from the FZ-09, but unlike that model the XSR has ABS brakes (though they are not linked). It has D-Mode power controls, traction control in two modes plus Off, and a round, LCD instrument that will tell you everything but where your significant other is right now (if you’re on a good road, you won’t care). The seat is 15 mm higher than the FZ-09’s so it will be more comfortable for many riders, and the 14-litre tank is shielded in three aluminum covers—more aluminum was used in the bike to enhance retro styling. Smaller and less imposing than the FZ-10, the XSR is in all ways an exciting and comfortable sporting motorcycle.

FJR1300
Ah, finally, a bike I could sleep on. But with the FJR’s potent (and well-proven; according to Bayliss, owners report more than 200,000 km of reliable use) four-cylinder, 1298 cc engine under you, sleep is unlikely to be on your mind. Two models were brought to Huntsville, an new ES (electric suspension adjustment) model, and a standard-suspension model. Both the ES model ($19,499) and the regular model ($18,099) are available in dark metallic grey and dark purplish metallic blue. Both models get a new six-speed transmissions (older models are five-speed) with revised ratios and helical-cut gears, which reduce transmission whine. The electric suspension adjustment was developed for an inverted fork, so the ES model gets a 43 mm upside-down fork, while the regular model gets the 48 mm standard item. On both the windshield is electrically adjustable, power is controlled by a D-Mode throttle, and traction control is available in On and Off only. Both get full LED lighting this year, and the ES model gets LED cornering lights. A revised tail section for both allows a bigger 50 litre top case. The FJR weighs 291 kg, and if you try to back it up on a gravel uphill parking lot, like I did, you’ll likely struggle, but underway, it’s easily manoeuvrable, stable, supremely comfortable, sporty, and eager to accelerate. The ES model is, yes, $1,400 more expensive, but for the convenience and, perhaps even more importantly, the USD fork, it will be well worth the extra money for some, and the six-speed gearbox is a nice improvement for both models.