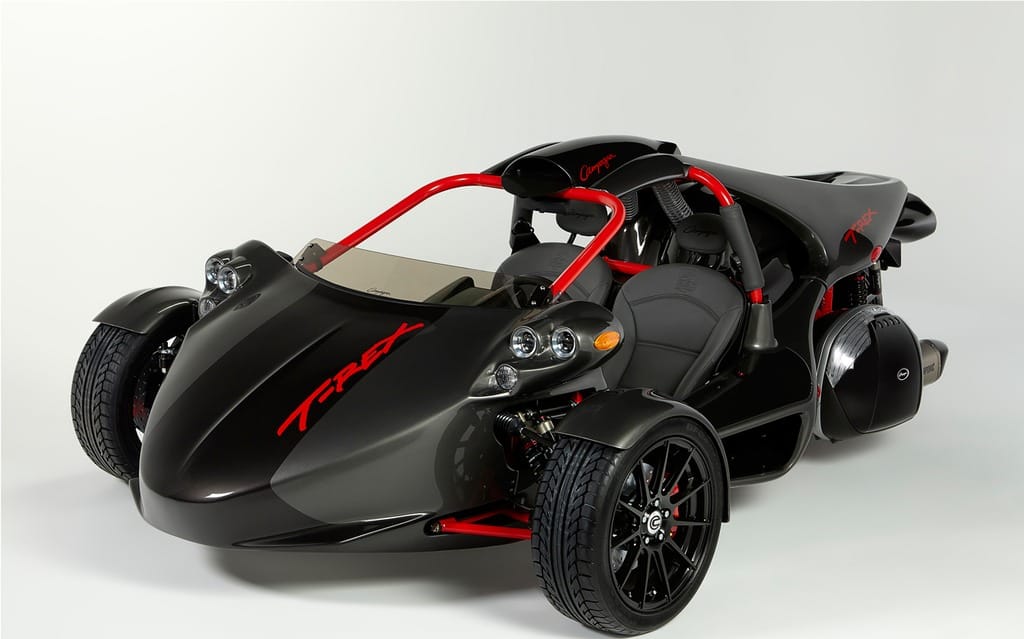 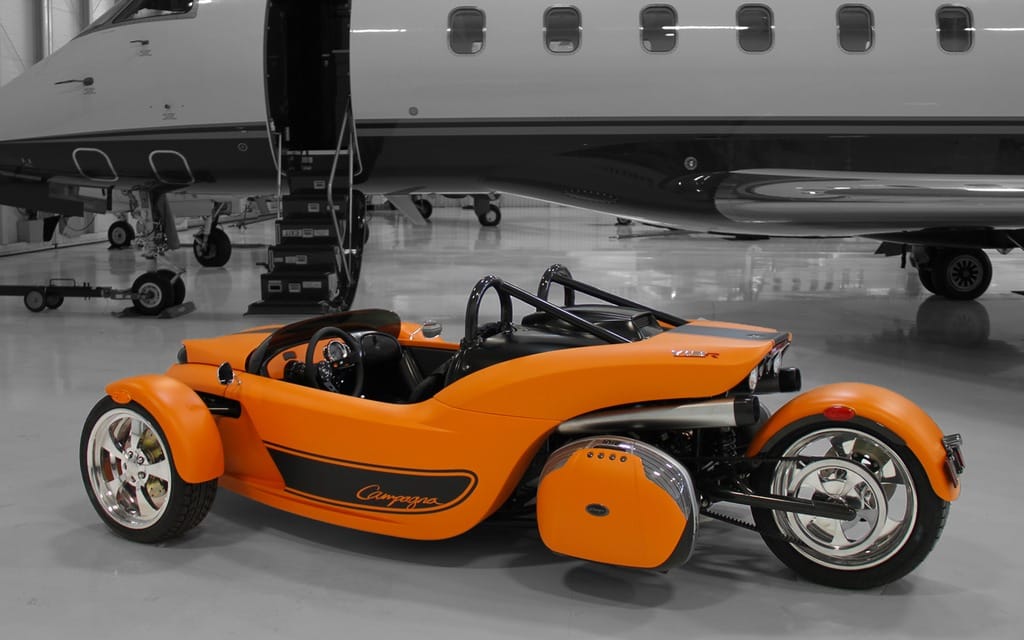 Motorcycle-engined three-wheeled car-motorcycle hybrids confuse the bureaucrats, but may offer driving excitement
It’s seldom easy to carve out a niche in the marketplace of powered vehicles, but a Quebec company seems to be doing just that by offering a three-wheeled vehicle that’s neither a car nor a motorcycle but contains characteristics of both and claims a kind of performance high-water mark.

Campagna Motors’ T-Rex and V13R are designated as something other than a motorcycle or a car, but the province seems unsure of just what that would be; still, as of March 1 the vehicles have been legal for licensing in Ontario, as motorcycles, requiring a motorcycle driver’s licence for operation. But the province is running a 10-year experiment to figure out if that’s right—and if it’s not, what is. It’s a confusing issue. As company boss André Morissette told a small group of journalists assembled in Toronto’s Distillery District recently, “This is not a motorcycle. It’s a car-like experience with the power of a sport bike. So you have the stability of a car and the performance of a powerful motorcycle. So driving the vehicle is like nothing else. It’s not like driving a motorcycle, it’s thoroughly not like driving a CanAm Spyder, it’s a whole different ball game. You’re sitting down. When you’re in the vehicle you have no idea, you don’t realize, that you don’t have a fourth wheel. You feel as stable as in any car.”

So if this thing feels like a car, why is it in Cycle Canada? Because, as we’re told, driving one is only like driving a car until you mash the gas pedal to the ground. Then it’s not like any ordinary car.

Neither, however, is it like riding a pure sport bike, no matter what Morissette says. Zero to 100 km/h times are good, but it’s a modest motorcycle that can’t beat 3.9 seconds from a standing stop. It’s a pretty damn good car that can beat that number, but a Honda VFR800, for instance, is likely to do it in 3.0, and more sporty street bikes can chop half a second or more off that. Still, performance is good, in large part because the T-Rex is powered by a 160 hp BMW six-cylinder K1600 engine. And more importantly, the driver’s perception of performance is likely thrilling. “You’re about five inches from the ground, and that multiplies the effect of speed, so if you’re driving at 100 kilometres an hour, it feels like you’re driving 200. It’s very, very, very fun.”

Campagna Motors started 20 years ago in Quebec with the idea that a high-performance engine in a lightweight three-wheeled vehicle could be a good thing, and their offerings have evolved from the use of Suzuki and Kawasaki 1100 cc engines, to a Kawasaki 1200 and then a 1400 cc engine, a Harley-Davidson V-Rod engine in 2013 with the launch of the V13R, and, since then, a BMW six. “We use motorcycle engines for two reasons, they’re lightweight, they’re compact. It’s the best bang for the buck in terms of power to weight. And that’s the name of our game, power to weight ratio.”

The vehicles are already legal in Quebec (where they’re registered as motorcycles), British Columbia (cars), Manitoba (motorcycles), and the New Brunswick (motorcycles). A motorcycle operator’s licence is required only in Alberta and New Brunswick; elsewhere, a car licence is enough. But if Spyders are already legal, what’s the point? The Spyder uses a handlebar and a motorcycle-like seat. The T-Rex and the V13R use a steering wheel, and side-by-side bucket seats. That drives them into a different class of vehicle—similar to the Polaris Slingshot, and dissimilar from perhaps everything else on the road.

That may be enough to drive sales in Ontario, where Campagna has one dealer, in Ottawa, and is looking for more. Given prices above $50,000, the vehicles may be a tough sell. On the other hand, given what Morissette says about driving one, test rides might be convincing sales points.