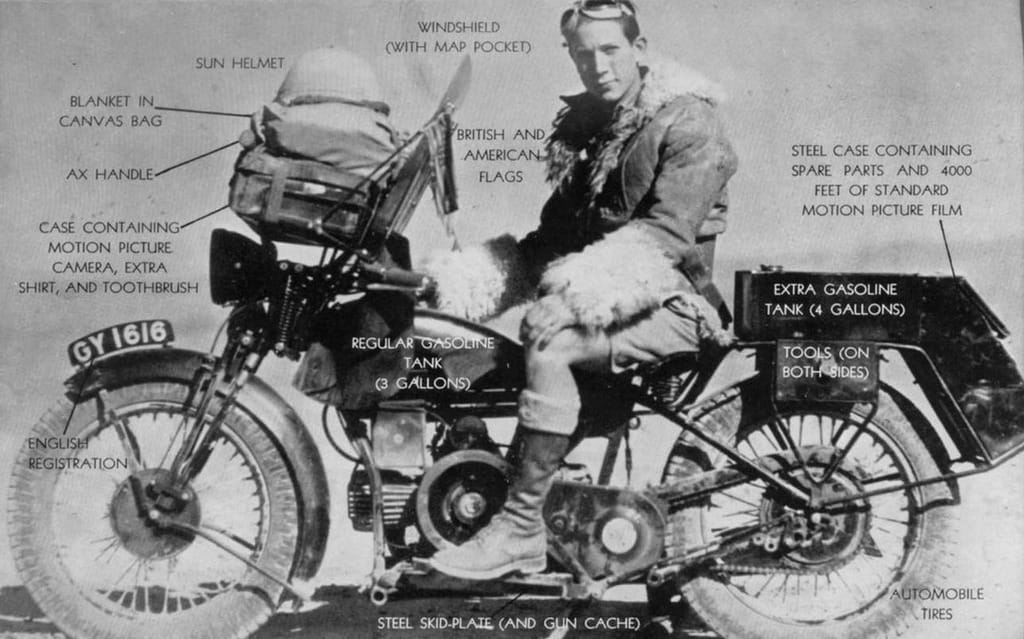 Stop! There’s a monkey on your pillion

One Man Caravan may be the greatest motorcycle adventure book of all time! (So far!)
“What? You mean to tell me that you’re Bob Fulton’s son? Why, I’ve worked with him for years!” beamed Edward Herrington, president of the Marmon-Herrington Motor Truck Company.

You’ve been warned about murderous thieves who prey on the solitary and isolated. So when a rather large motor car comes roaring over a sand dune, your first reaction is to panic and reach for the pistol seconded in your bash plate. After all, these are the first human beings you’ve seen since leaving Syria.

But out bundle an Englishman, a Persian and three Americans, all in the oil business. They are so taken by your journey around the world on a motorcycle that they share their rations.

And, when one, Mr. Harrington of course, offers lodging when you return to the United States, you find out that, even in 1932, in the middle of the most forbidding desert on the planet, in a place most Americans still couldn’t find with a map and a Bedouin guide, it is indeed a small world.

More importantly, you would also be the first person to ride completely around the world on a motorcycle. Or, at least as Bob Fulton Jr. was, the first to write a book about it.

That book would be One Man Caravan, originally published in 1937, reissued most recently in 1996 by Whitehorse Press, and possibly the ultimate printed example of the adventure that is motorcycling.

In fact, how the trip even came about was pure happenstance. Having graduated from the University of Vienna with a degree in architecture, Fulton was visiting friends in London before sailing home to America. When asked when he was sailing for the United States, Fulton blurted out (perhaps to impress the young woman with the toffee-coloured hair who asked the question) that he was thinking of “going around the world on a motorcycle.”

Fortunately — or unfortunately — one of the guests owned Douglas Motors. With little more than a “I say, that sounds grand. If you haven’t your motor yet, old man, how about letting me furnish it,” three weeks later, Fulton was on his way around the world on a lightly modified, six-horsepower Douglas flat-twin.

Though he originally thought to bring extra shoes and dinner party attire, Fulton’s provisions for the entire trip amounted to an extra shirt, a toothbrush, a helmet (for the sun rather than a motorcycle crash), a motion picture camera, 4,000 feet of film, an axe, a blanket and a .32 Smith & Wesson revolver he hid in the motorcycle’s skid plate.

Along his 18-month journey, Fulton covered 40,000 kilometres, 22 countries and passed through more than a few civil insurrections. Yet, his trip was remarkably trouble-free. He never once had to draw his gun, he had only six flat tires and the Douglas gave him very little trouble despite having once been forced to run on mustard oil when regular petroleum lubricant was unavailable.

When he began his trip, Fulton said he was most interested in seeing buildings and monuments because that was what he had studied. As time went by, however, the trip became about the wonderful characters he met: the commandant at Khan Abu Shamat who all but pleaded with him not to venture into the Syrian desert, the captain of the Highland Guards who refused to believe Fulton had ridden a motorcycle to Razmak, and the monkey he befriended in Sumatra that rode pillion for three days before fleeing into the jungle.

Fulton held that race or religion made little difference in the reception that greeted him. He said that, invariably, encounters that started with mistrust because he was a stranger turned almost collegial when people found out he was riding a motorcycle around the world.

Robert Edison Fulton Jr. went on to invent the Airphibian car/airplane and the Skyhook air-and-sea rescue device. He died on May 7, 2004, at the age of 95. He still had the Douglas, fully restored and ready to ride.