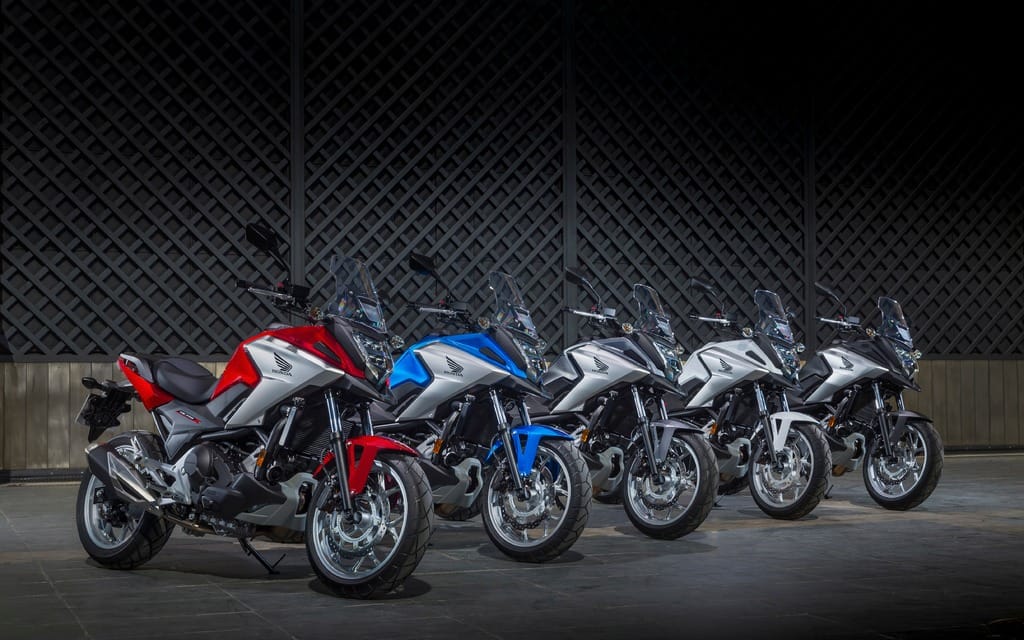 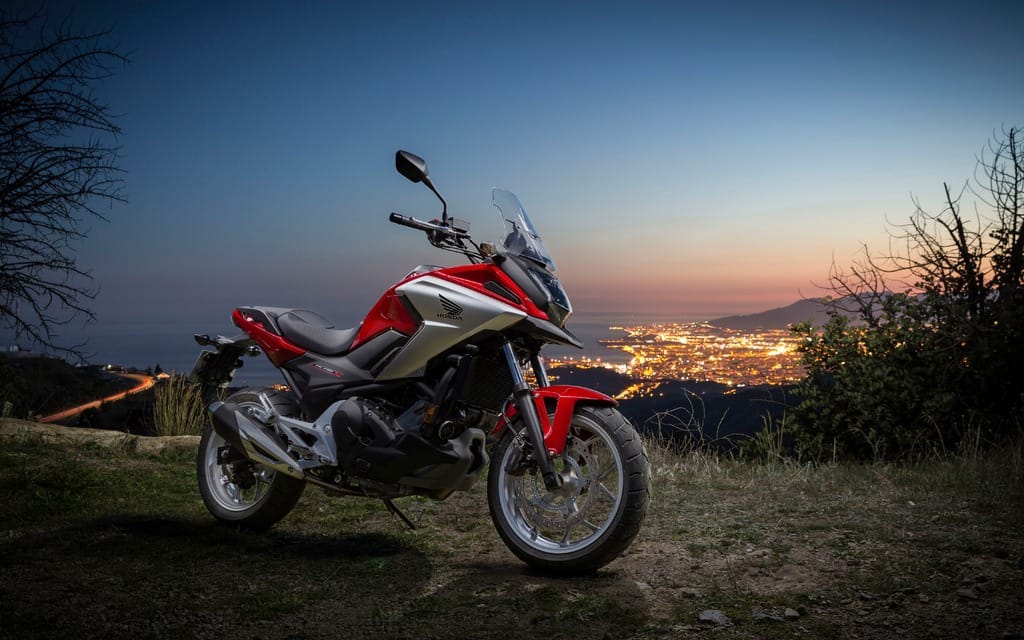 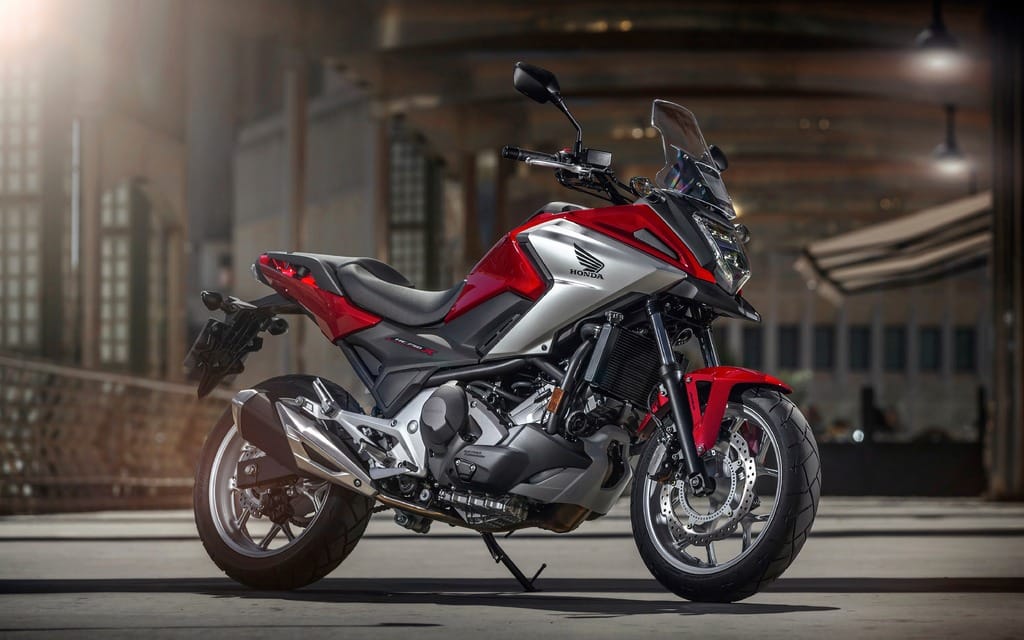 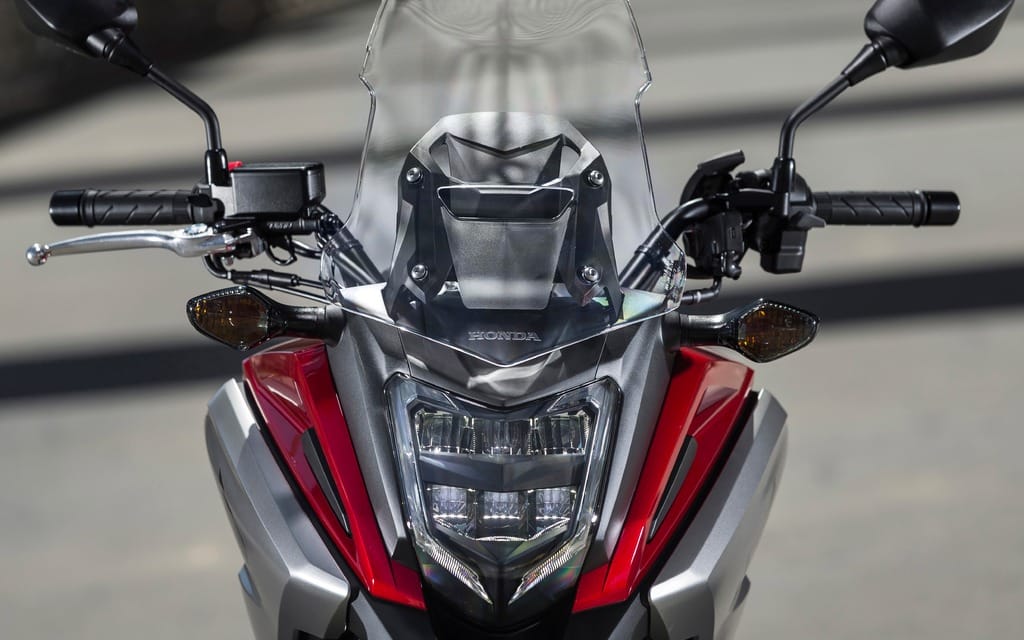 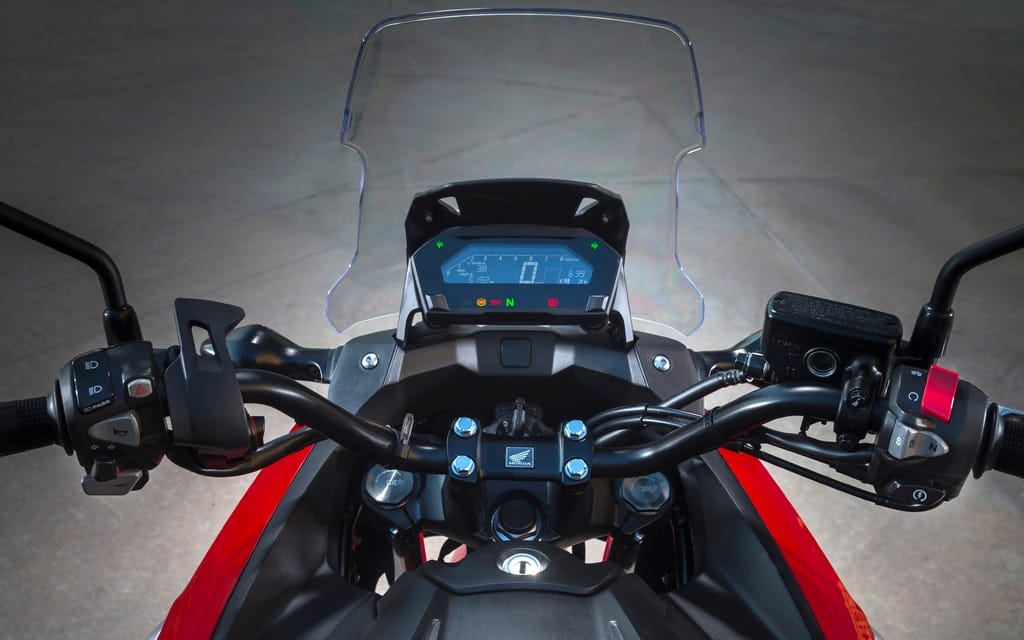 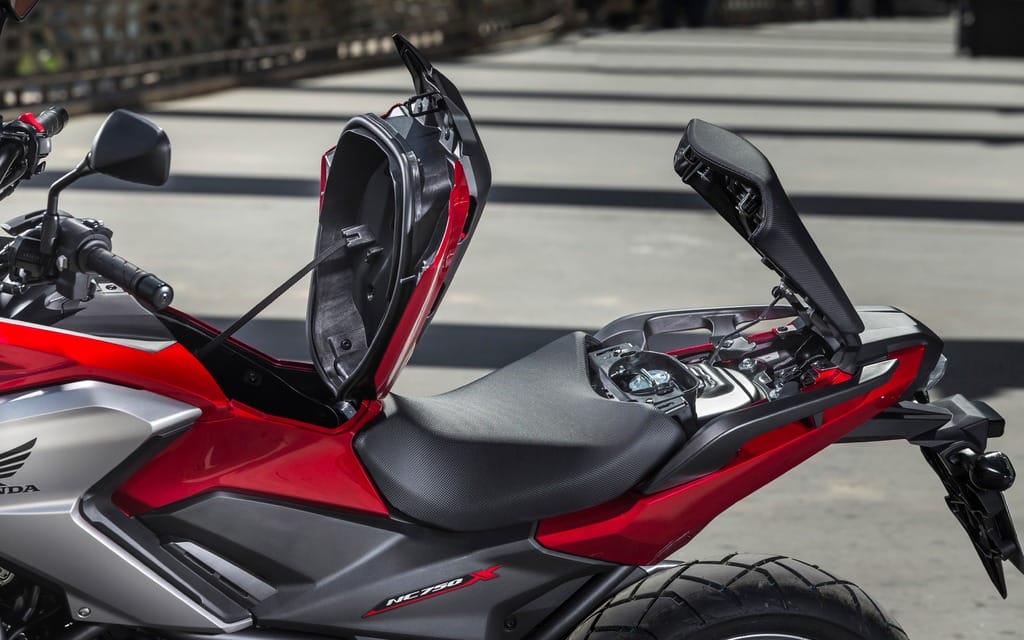 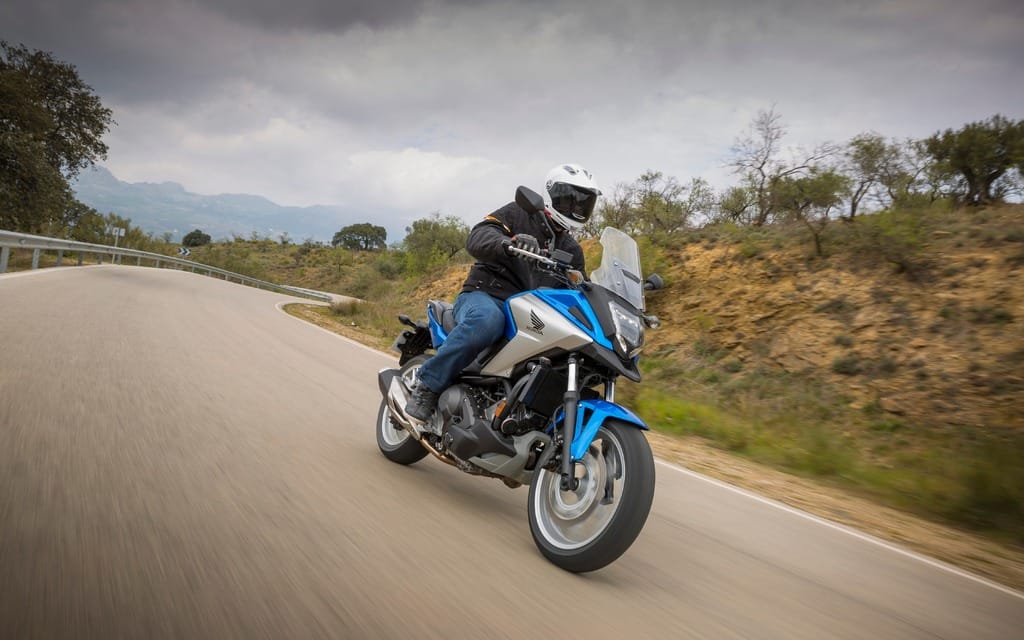 Honda NC750X: The practical one

Don’t think it’s dull just because it’s not exciting
Who said the NC750X can’t be exciting? I’m riding Honda’s revamped twin behind a couple of identical blue bikes, holding its throttle wide open much of the time, occasionally flick-flick-flicking with my left index finger or thumb to go up or down through the gearbox as we follow a snaking Spanish dual-carriageway, banking left or right through fast curves in enjoyably enthusiastic fashion.

Okay, so the NC could be providing more thrills. It isn’t in danger of tearing my arms from their sockets with its acceleration, it’s hitting its rev-limiter unless I short-shift through the gearbox, and it feels distinctly soft and heavy for a naked 750 cc twin. But equally, the appeal of Honda’s useful, economical and generally efficient roadster is very easy to understand, especially in this revamped and slightly more lively form.

There’s certainly no denying the impact of the 750X and its less popular siblings the 750S and Integra, which between them have sold more than 130,000 units worldwide since their launch four years ago (more than half of those in Europe). A substantial and increasing number of the 750X have been fitted with Honda’s Dual Clutch Transmission, too: up from just 15 percent with the original NC700X in 2012 to 45 percent last year. Now both the DCT system and the X-model itself are updated in an attempt to further broaden its appeal.

Most obvious is a general sharpening of the design, incorporating some reshaped body panels, LED head- and taillights, and a slightly taller screen. The storage area, where a fuel tank would normally be, is enlarged by a litre to 22 litres in capacity, and gains slats on its top for securing a tank bag, plus bungee hooks below. The instrument panel is basically unchanged but gains the option for a variety of colours, some of which can be programmed to change with revs.

There’s no change to the engine itself, famously half of a Jazz car unit. It remains a 745 cc, sohc eight-valve parallel twin that is softly tuned to give a modest maximum of 54 claimed hp at 6250 rpm, and whose cylinders are angled at 62 degrees from vertical in the tubular steel frame chassis. The only real engine-related change is a slightly shorter exhaust muffler that manages to save 500 g of weight while helping the NC get through Euro 4 emissions tests.

What does change is the Dual Clutch Transmission system, whose software is updated. As before DCT gives the rider the option of changing automatically, or manually via buttons on the left handlebar. Previously there were two automatic modes, touring D and sportier S, the latter allowing more revs before it changed up. Now the system gains two additional S modes: one less sporty (so midway between D mode and the previous S, the middle of the three) and the other sportier still.

Other refinements include a higher rev limit at which the rider can change down, using the manual buttons; and a generally smoother change designed to reduce the lurch on accelerating from a closed throttle. The DCT system also gains the ability to detect whether the bike is on a hill (using info on speed, revs, throttle position and gear selected, rather than an IMU) and adapt its function accordingly.

The subtly reshaped NC750X looks slightly more like Honda’s Crosstourer and Crossrunner but it still feels very distinctive, even before you pull away, if you’ve just made use of that very handy storage area, which swallows most full-face helmets even more easily than before. The one-piece handlebar is slightly raised and quite wide; the seat is quite high at 830 mm but the Honda nevertheless felt very manageable as I started the DCT-equipped test bike’s engine and selected drive mode with a press of my right thumb.

It’s hard to imagine a more relaxed, rider-friendly bike than the NC in auto mode. With no clutch to worry about I simply opened the throttle and was sent accelerating gently forward, the Honda changing up through its box with seamless efficiency. I’m not sure that the DCT felt smoother than previous systems in Malaga’s traffic, but despite a few audible clonks as it changed ratios it certainly seemed refined and snatch-free.

And the system was also pretty impressive when we got out of town and up onto some twistier roads in the hills. In the past I’ve tended to find DCT too conservative for sporty riding, with a tendency to change up too soon, so the revised S mode was very welcome (although I couldn’t see much point in the other two modes). Its sportiest, No. 3 setting was a distinct improvement, allowing the bike to rev notably harder before automatically slotting into the next ratio.

If anything it still occasionally changed up a bit too soon, and I wouldn’t have minded the option of a sportier still setting. But the NC lump is so softly tuned and low-revving that perhaps there wouldn’t have been much point in that. When I flicked the button to select Manual, and started changing by using the paddles on the left handlebar, I frequently found myself tagging the rev-limiter at about 6500 rpm until I learned to change up at what initially seemed like ridiculously low revs.

The DCT system’s ability to go down a gear at higher revs was probably useful on those twisty roads, where I sometimes added a downshift while braking when in auto mode. The dual-clutch system takes some getting used to but once familiarized I really enjoyed it, and could imagine a further refined version (ideally with programmable settings in each gear) being useful on much sportier bikes than the NC — even on a racetrack, where the ability to change up without having to get the left foot under the gearshift lever would occasionally be useful.

The rest of the bike did a reasonable job of backing it up, too, although the engine’s ability to propel the NC at a smooth and effortless 130 km/h, its progress tracked by the multiple colours of the instrument panel, wasn’t quite matched by the rest of the bike, notably the non-adjustable screen which, despite being taller, still generated a fair bit of wind noise. If Honda really wants to claim the X-model is an adventure bike, they could at least give it an adjustable screen and seat, like most bikes in that category.

One thing they have given it is revised suspension. The forks are new 41 mm right-way-up Showas that have gained the catchy name Dual Bending Valve, due to revised internals. They’re not adjustable (or even especially sophisticated) but worked pretty well, giving good ride quality and a well-damped feel even under hard braking from the front-end blend of 320 mm wavy disc and twin-piston Nissin caliper, which delivered reasonably strong stopping power.

The rear shock gains a preload adjuster, which it surprisingly lacked before, and which allowed me to wind the spring up to its maximum, usefully sharpening the steering for the twisty road and adding some ground clearance that prevented the footrests scraping too often. Set up like that the Honda steered pretty well, changing direction with a reasonably light touch for a bike that weighs a hefty 230 kg in DCT form (10 kg less without).

Inevitably the NC750X’s positioning as an adventure bike means that it has a generous 150 mm or more of travel at each end, making it feel slightly tall and remote at times. But it handled well enough to make that twisty Spanish roads fun, helped by Bridgestone Battlewing tires that managed to find plenty of grip on the occasionally dusty looking surfaces.

And although plenty of other bikes would have been more entertaining as well as quicker, the Honda’s practicality shouldn’t be ignored. Its mirrors are good and its seat pretty comfortable for both rider and a pillion, who gets a sturdy grab-rail. Its “tank” storage is seriously useful, and the actual fuel tank’s unchanged 14.1-litre capacity will typically be good for 320 km, given that most owners manage better than 4 l/100 km.

That of course makes the Honda very cheap to run, and its price is low enough to make it tempting to those who put dependability, economy and practicality ahead of speed, agility and excitement. This version of DCT is definitely a step forward, and is probably enough to convince me to take the dual-clutch option if buying an NC750X. Either way, you’d probably still have more fun on something else. But Honda’s sensible 750 looks set to remain popular for a while longer — and to generate plenty more satisfied owners in the process.