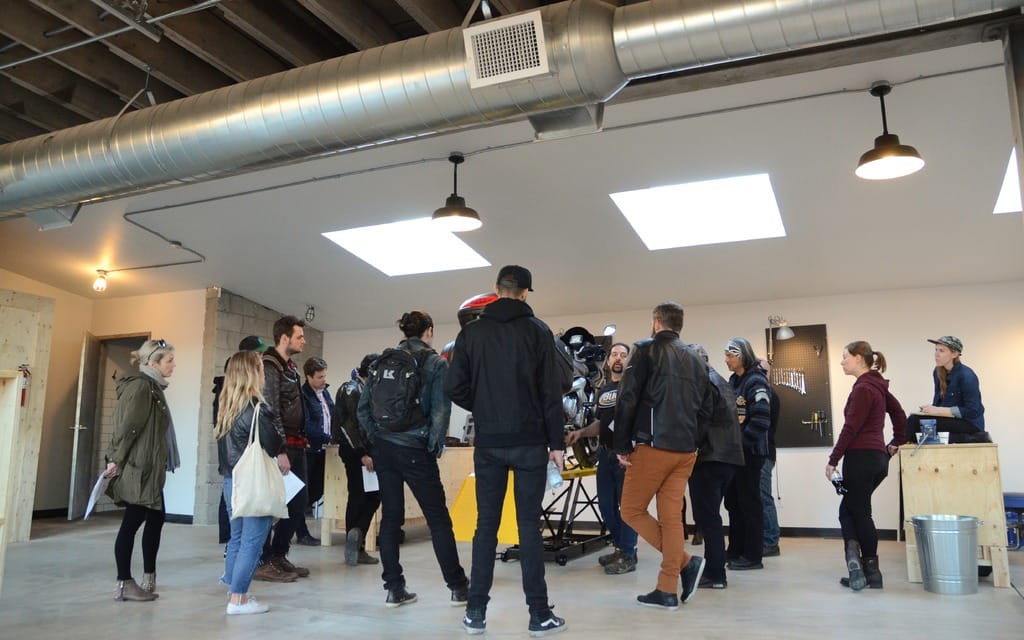 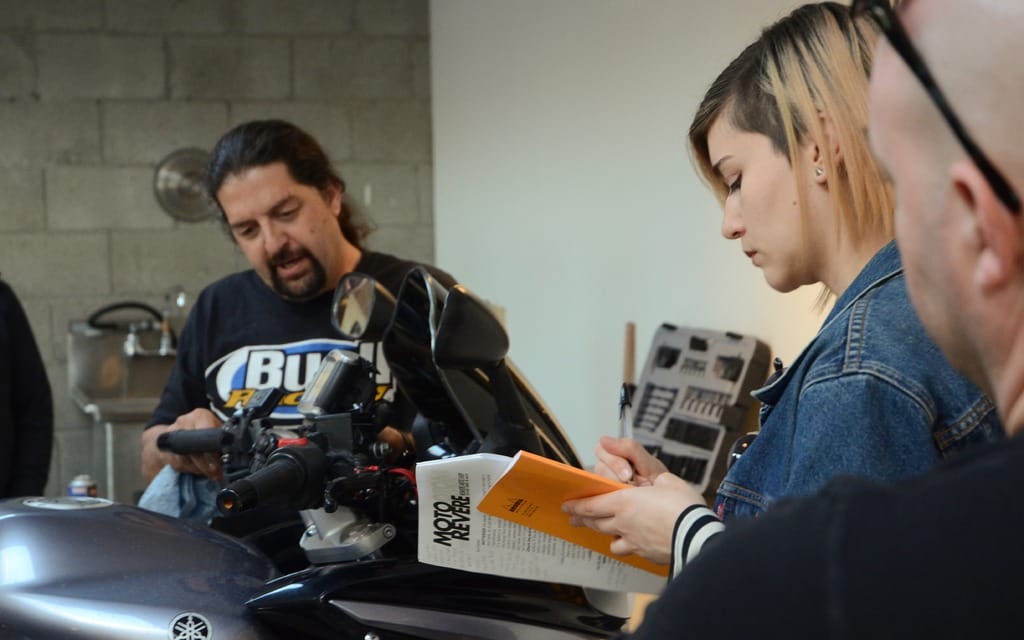 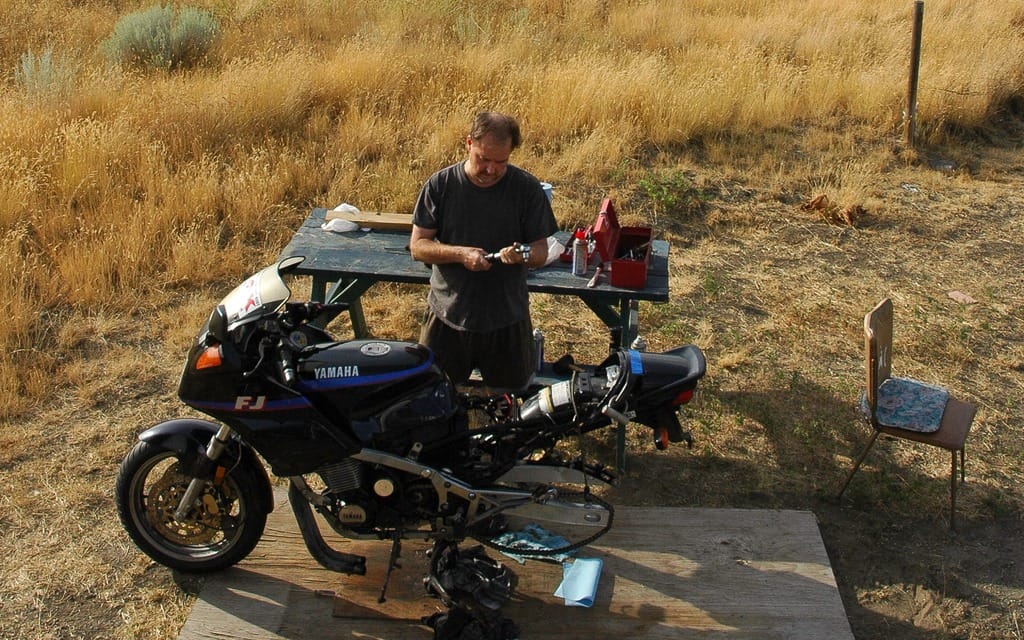 Moto Revere opens DIY shop space to Toronto’s motorcyclists
August 15, 2006. Steve Thornton has the rear wheel off his FJ1200, possibly to lube the swing-arm bearings, in his “garage”—which is the backyard of a house in Kamloops, British Columbia. Look at the picture: you can see the potential problems: a puff of wind throws sand over everything, including freshly greased bearings; the sun, always in the wrong place, blinds Thornton who puts screw A into hole B and can’t get it back out; a passing rattlesnake bites him on the thumb because, well, he just had to play with it. So much better, isn’t it, to work on your bike in a nice clean environment, where rattlesnake bites are as unlikely as a Kamloopsian Sandstorm.

That’s not precisely what Peter Redford and Andrea Lothrop were hoping to resolve when they dreamed up Moto Revere, but even a Torontonian might find wrenching on a motorcycle in his or her backyard counter-productive, or at least uncomfortable. And until now, that’s pretty much what a Toronto motorcyclist was left with if a personal garage was not available. Moto Revere opened on May 1 at 1250 Dupont Street in Toronto’s downtown-west area with 1500 square feet of well-lit, clean, dry, working space, excellent lighting, racks of tools, a couple of bike lifts, the sometimes presence of an experienced mechanic (presently, Rob Nadeau), and room to leave the bike overnight if the job isn’t finished.

Redford and Lothrop came up with the idea last year, after they bought a CB650 (his) and an XS400 (hers) and found themselves with no reasonable place for wrenching. Lothrop was new to motorcycling, but both of them had experience with bicycle co-ops, and the idea of opening a sort of club for motorcyclists who need workspace was not a big leap for them. However, it’s become a big leap, because it’s what they’re doing now. This, says Redford is their day job. And their night job.

Here’s how it works: you buy a membership, available as a monthly package, for one of two prices. For $45 plus an hourly fee, you can work on your bike in the shop, which is open reasonable hours. For $150, you get to work on your bike without the hourly fee, plus you get parts storage and some overnight parking. The way the shop is set up, four motorcycles can be manhandled at any one time. There are racks of basic tools arranged along the back wall, and there is another rack with some more advanced tools, but for the time being, the kind of work that would be carried out on a motorcycle will be limited to what someone without a garage is likely to want to do—someone who would weld up a broken frame or rewire a whole motorcycle is likely to already have the space for that kind of thing; someone who needs to change the oil (“and filter, every time!” says Nadeau) clean and adjust the chain, and maybe even replace some fork seals might find Moto Revere a very handy place.

May 10, 2016. Steve Thornton is at 1250 Dupont Street. His FJ1200 is not. He never was bitten on the thumb by a rattlesnake but that doesn’t make this motorcycle workspace any less attractive. Redford and Lothrop are holding a kind of introduction at the shop. Mechanic Rob Nadeau is there, with an FZ6 on a bike stand, and about 20 people have shown up, mostly in their twenties or thirties, mostly men, riders of different kinds of motorcycles; there is as much denim as leather, as many tattoos as full-face helmets, whatever that means. One woman is taking notes diligently and a man with a smart phone is recording Nadeau as he talks about taking care of your motorcycle. Change the filter when you change the oil. Don’t think of WD40 as anything but a water dispersant. These new lithium batteries weigh less than a hamster and last longer. Here, let me show you how to lube your cables—er, cable, this FZ has only one, for the clutch. If you underinflate your tire it’ll squirm, if you overinflate your tire it’ll give you less traction. Stuff that you all know, but a surprising number of motorcyclists don’t. To their credit, these people are paying attention.

Nadeau seems a good source for that info. He’s a licensed mechanic, takes care of bikes for the Rider Training Institute, worked with a TransAm race team, and teaches transportation tech at a Toronto area high school. “I also run motorcycle tours in the Barbados. Can you mention that?” “No, Rob. Sorry.”

He says the space is a good one. He likes the clean, open plan, the fact that it’s on a main street in T.O., that it will become a “bit of a hangout” for bike riders, that lighting is good especially during the day when skylights are bright, and he especially likes the fact that Redford and Lothrop are “open to trying new things.” They met Rob at a maintenance course and they took to each other quickly; Rob agreed to work with them in some capacity—things are still in flux; it’s a whole new enterprise—so he’ll likely run the odd workshop, might be available for one-on-one consultation, that sort of thing.

They only have about 10 members as this is written in midMay, but chances are that number will grow, and things will change. Things might get moved around in the shop, making more room available, for instance, if it seems important. More or different tools may become available. A vending machine, maybe. Possibly another bike lift. Movie nights, even—who knows? It’s all up for grabs at the moment. The miracle, for garage-less motorcycle owners in Toronto, is that it’s there.