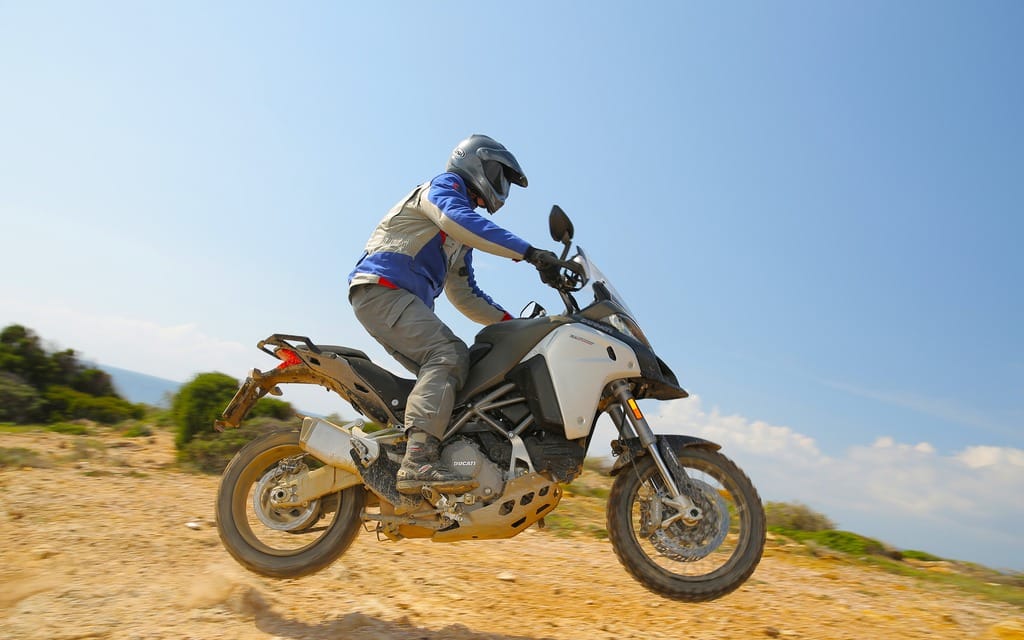 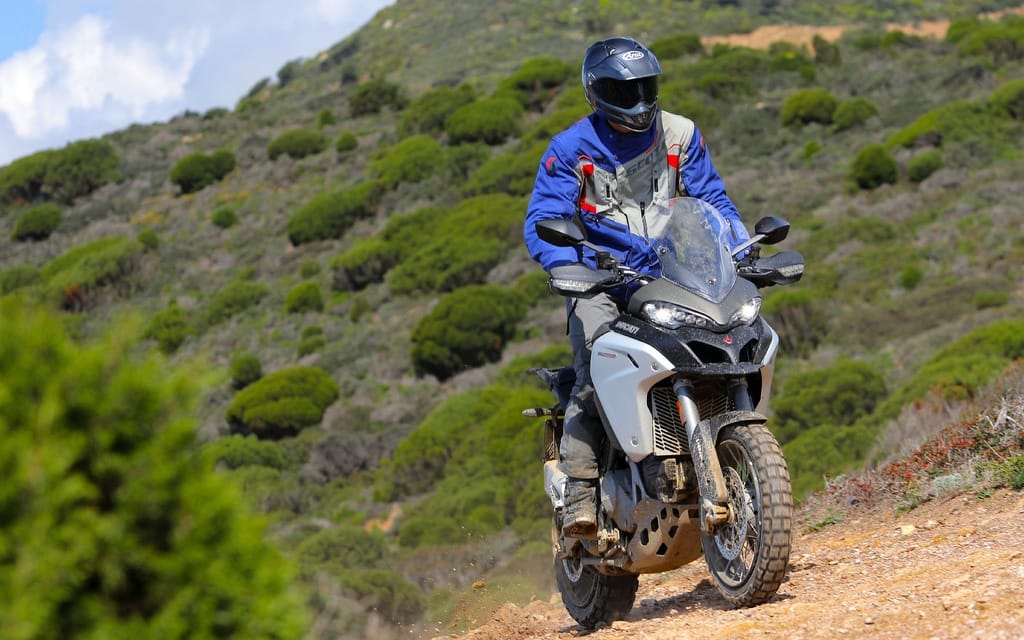 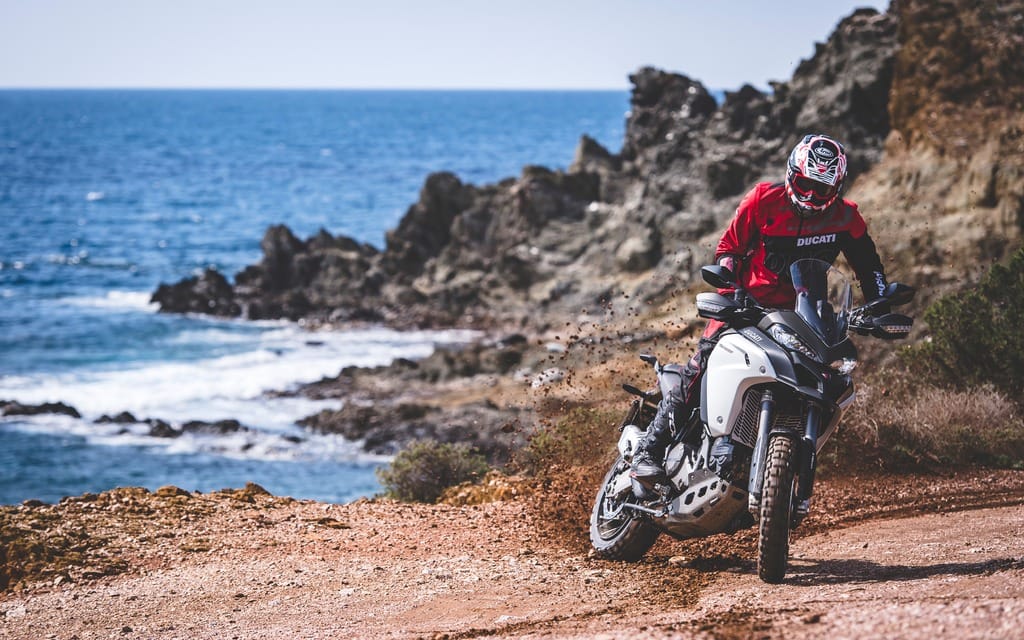 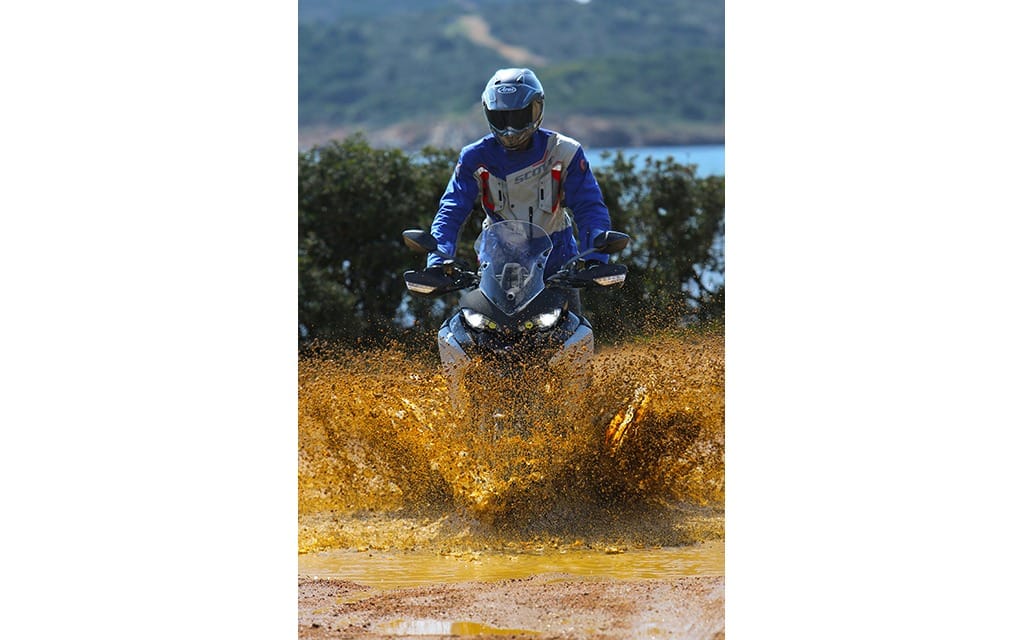 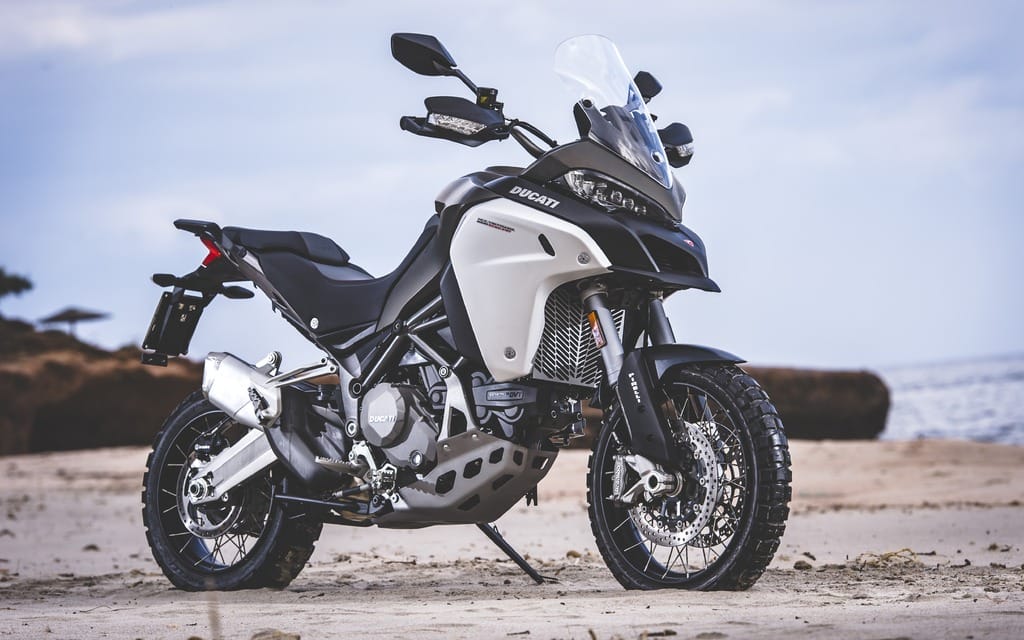 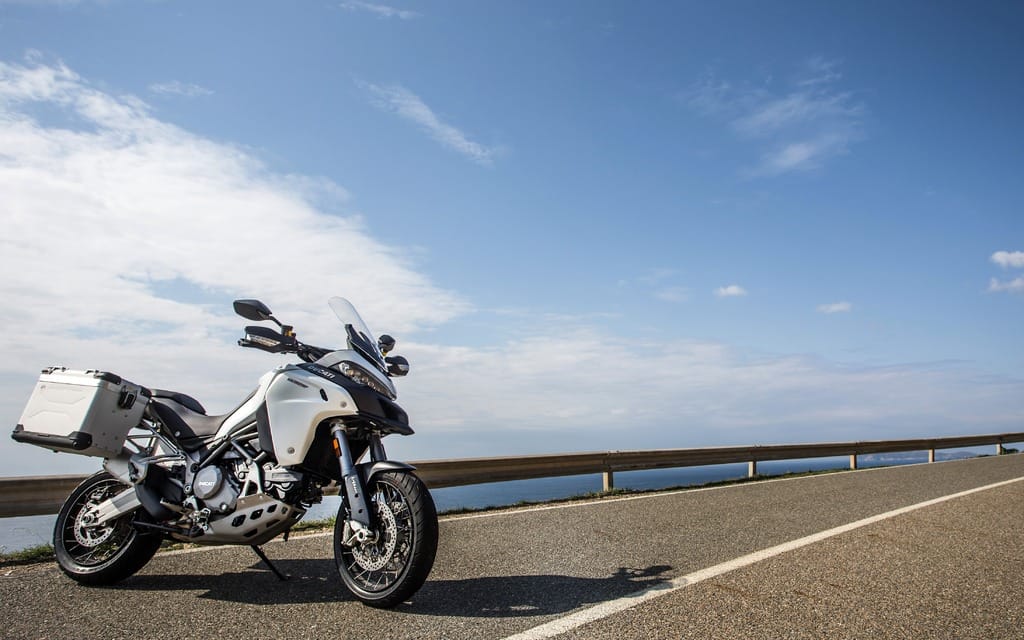 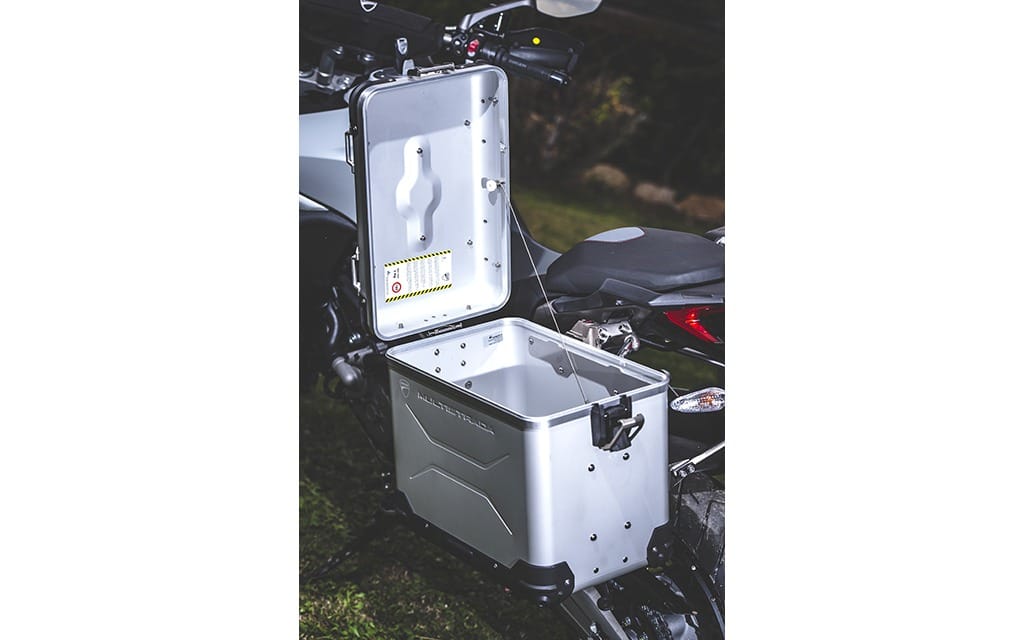 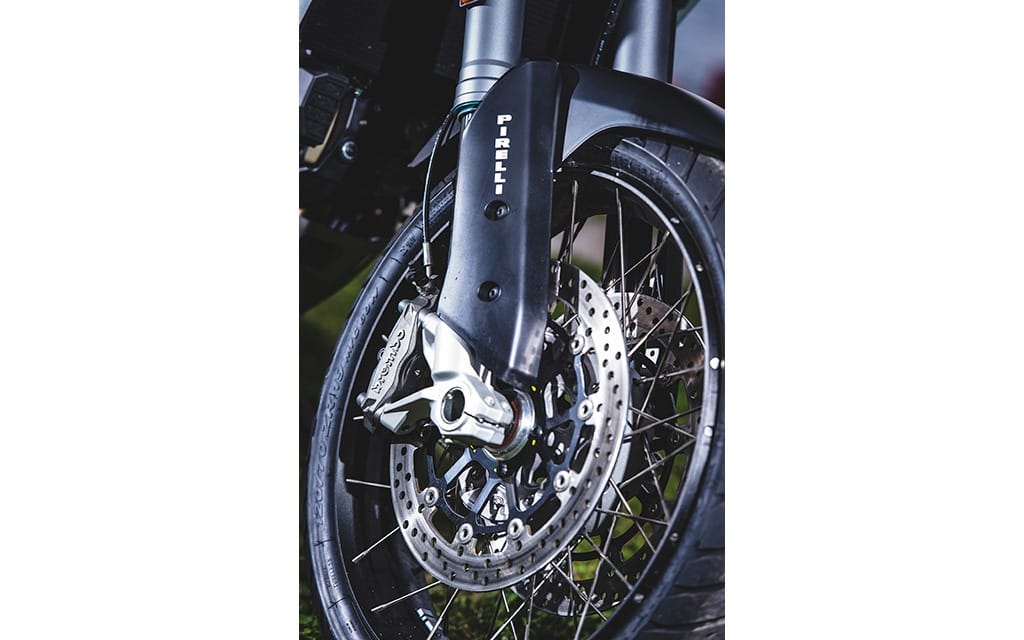 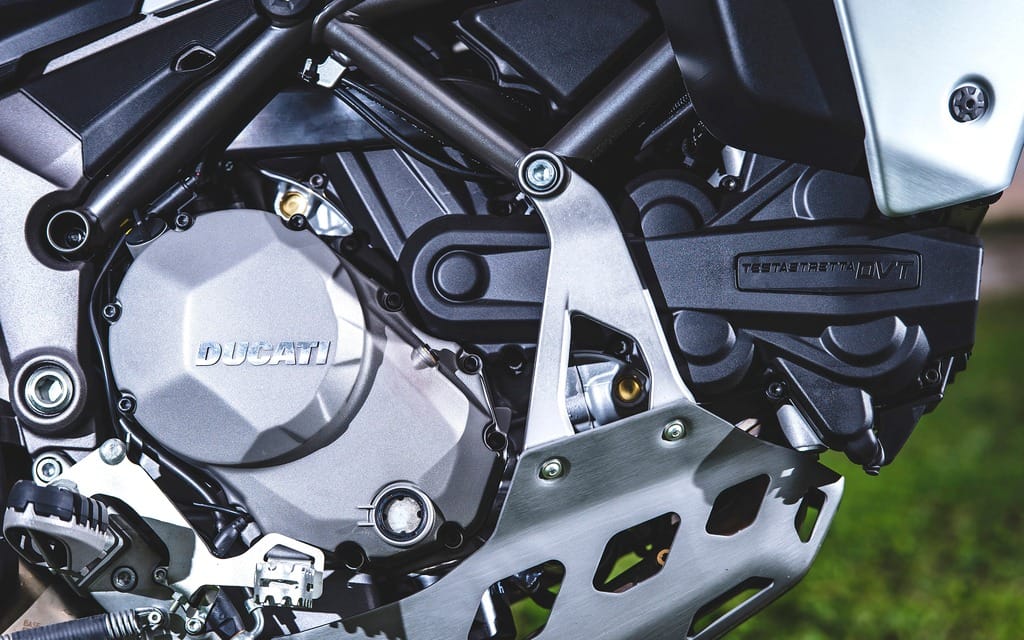 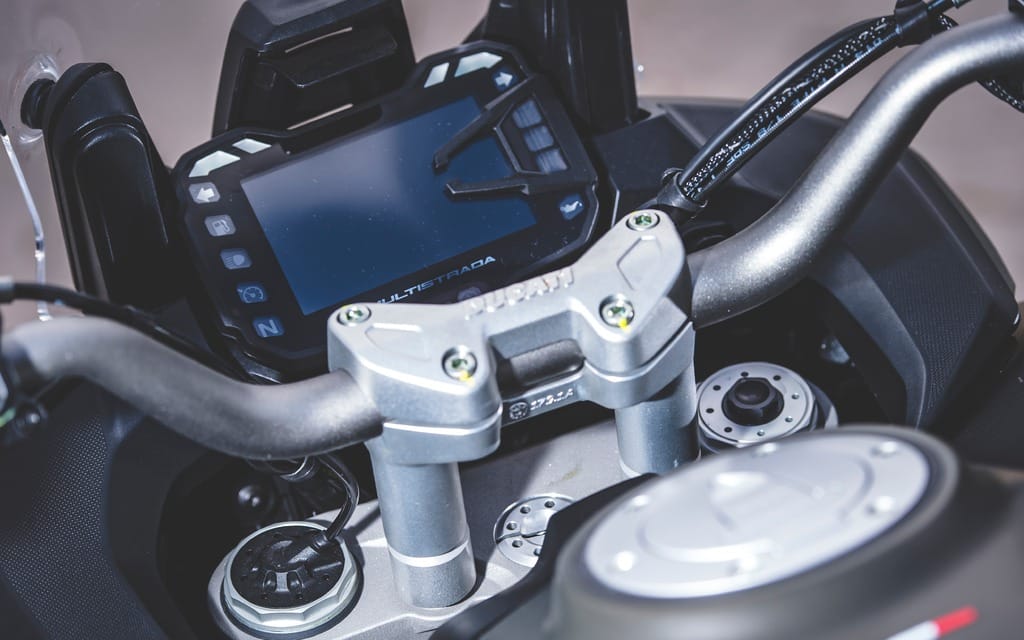 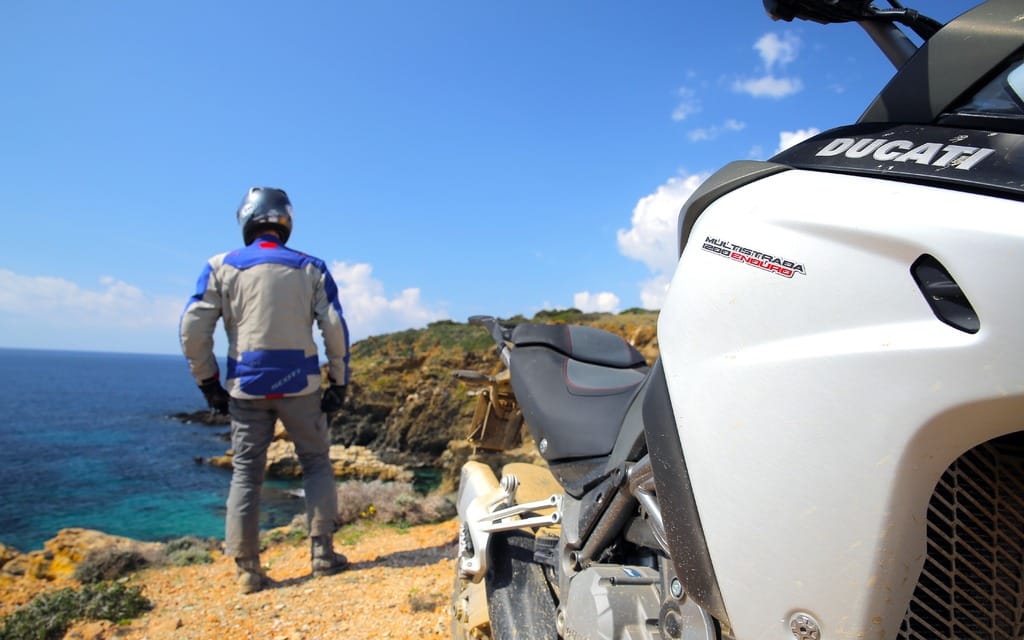 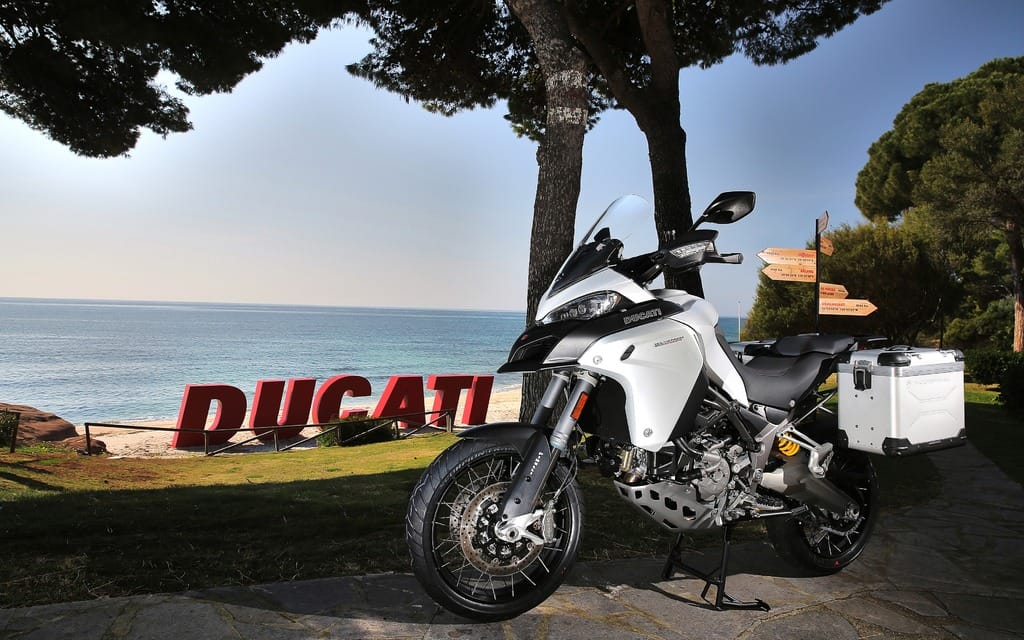 Ducati’s new Strada is a rush on any road, and many roads
You don’t have to speak Italian to know that “Multistrada” means “Many roads,” or that the 1200 cc V-twin of that name has been a hit over the last six years by bringing a new level of versatility to the familiar Bolognese format of style, speed and sweet handling. But despite the talk of “four bikes in one,” even Ducati never really pretended that the original Multi, with its 17-inch front wheel and distinct lack of crash protection, was designed for unmade roads, let alone places where there wasn’t a strada at all.

The 1200 Enduro, on the other hand, is a very different type of Multistrada — one that is intended to be ridden off-road as well as -on. A few of its core components, including the tubular steel frame and the 1198 cc, dohc eight-valve V-twin engine, are shared with existing Multistradas. Almost everything else, from the longer-travel suspension and stiffer, twin-sided swing-arm to the big fuel tank, new ergonomics and considerably beefed-up protection, is purpose-built.

On the launch in Sardinia it doesn’t take the Enduro long to show the value of that. After barely 10 km on a winding coast road we all stop, select Enduro riding mode — and then turn sharply left, stand up on the pegs, and gun the Ducatis up a steep, bumpy path of gravel and sand with plenty of hairpin bends.

This is a proper off-road test, and the 1200 Enduro passes it with flying colours. It thunders out of the turns, kicking up dirt with its rear Pirelli but with the traction control moderating the big V-twin lump’s torque. It glides over bumps, ruts and occasional rocks, its 200 mm of well-controlled semi-active suspension soaking everything up and its wire-spoked 19-inch front wheel and chunky aluminum bash-plate making light of the tricky terrain.

The Enduro’s off-road competence (especially with knobbly Scorpion Rally tires fitted) is hardly a surprise, given how seriously Ducati had approached the project. The firm must have been tempted to toughen up last year’s revamped Multi with a few bolt-on accessories but instead they went far further, and not just for the alliteration.

That tank, for example, is a complex, 30-litre plastic creation that is flanked on each side by protective aluminum plates. The bash-plate is longer than other Multis’, made from thicker aluminum, and bolted to the frame rather than the engine. The handlebars are 50 mm higher for easier use when standing, which occurs on heavy-duty footrests that come with crash-resistant and easily adjustable brake and gear levers, plus quickly removable rubber inserts.

This all helped as soon as we rode off the road and onto that steep dirt path, where despite being tall I could reach the bars easily enough, and the slim seat combined with the well-positioned foot controls to make riding while standing up easier than on most adventure bikes. The Ducati felt pretty big and heavy — with a kerb weight of 254 kg it’s only a few kilos lighter than BMW’s R1200GS Adventure — but it was very controllable, helped by the engine’s easily used low-rev power delivery.

The big desmo lump is basically unchanged from the Testastretta unit introduced last year, although first gear is shorter, overall gearing is lowered by three extra teeth on the rear sprocket, the air intakes are higher (for increased “wading depth”) and the silencer is raised to improve clearance. That means the Enduro benefits from the Desmo Variable Timing technology that gives very smooth low-rev delivery, allowing the Multi to chug forward sweetly from below 2000 rpm, which in first is now only 16 km/h.

As with the other Multi models there are four riding modes, all giving different engine maps and also dedicated settings for suspension, traction control, wheelie control and ABS. Enduro mode (like Urban) has a soft throttle response and a maximum of 100 claimed bhp rather than the full 160 bhp of Touring and the sharper Sport. As usual (but unlike most manufacturers’ systems) you can fine-tune just about every parameter with a few presses of the button on the left bar.

It’s a brilliantly versatile (that word again) system that helped make the Ducati remarkably rider-friendly on dirt for such a big and powerful bike. Throttle response was superbly crisp, and the resultant acceleration immense, with the chunky rear Scorpion finding improbable levels of grip and the electronics allowing a modest amount of sideways action in complete control.

Perhaps the only slight disappointment was that the 75 km off-road section was mostly tight first- and second-gear stuff, rather than the more open dirt roads that would have allowed the Ducati to confirm its off-road stability and suitability at higher speeds. But in a way, the fact that such a big, heavy adventure bike worked so well on those trails was even more impressive.

The more expert off-road riders were exploiting the Enduro mode’s lack of rear-wheel ABS to skid the rear end into turns, then power-sliding out having turned off the traction control, and fine-tuned the power output to give Touring’s full 160 horses. Being less of an expert, I sharpened the throttle response with the Touring map but mostly kept the TC on, and generally stuck to steering rather than skidding into turns.

I was also glad to retain the front-wheel ABS, which worked remarkably well even on downhill sections, given the very loose surface. And I was seriously impressed by the semi-active Skyhook suspension, especially after I’d pressed a few buttons to firm up the Sachs units slightly from the Enduro mode’s standard settings. With 200 mm of very well-controlled travel (30 mm more than the other Multis) it coped well with everything from ruts to occasional boulders.

One rider crashed at a gentle pace and was back up with minimal damage to a bike that looks a lot more robust than other Multistradas. Perhaps its only flaw in that respect is the hand-guards, which give useful protection but hold the easily broken indicators. And inevitably it shares with other adventure bikes the drawback that tire technology, for all its advances, hasn’t yet come up with rubber that works remotely as well both on- and off-road.

The press-launch magic that even Ducati (or Pirelli) can’t replicate in the real world is the way that we emerged from the lunch stop onto Multistradas that were fitted not only with accessory Touratech aluminum panniers, but also with the Scorpion Trail II tires that the bike wears as standard. These were infinitely better suited to the afternoon’s road route, but would have been the Enduro’s Achilles heel on the dirt.

It was soon clear that the Enduro is almost as superb a roadgoing all-rounder as the other Multistradas, and in fact has some distinct advantages. Of course that big V-twin engine felt as wonderfully grunty as ever, if anything even more lively and responsive due to the lower gearing, and was so long-legged that I can’t see the bike seeming stressed on a long trip despite a marginally revvier cruising pace. The Enduro seemed to sound even rortier than normal, perhaps because noise is reflected up by the tank and sidepanels.

Straight-line performance was as immense as ever, especially in Sport mode which gave a notably sharper response than Touring, with a sweet throttle action and an impressively strong delivery from 5000 rpm or below. We didn’t have much call for the softer Urban mode, or the standard-fitment cruise control, but the Ducati’s back-lit buttons were easy to use, and the colourful five-inch TFT screen was as informative as it was attractive.

One obvious Enduro asset is that big fuel tank, which increases capacity by 50 percent and extends realistic range to 400 km or more, even at my easily beaten average of just under 7l/100 km. It also gives some useful leg protection. And I was impressed by the screen, which is easily adjusted on the move in familiar Multi style, and on its highest setting gave a turbulence-free ride although I’m very tall.

I was less impressed that the hand-grips don’t give full wind protection, that heated grips don’t come as standard, and that the redesigned two-part seat is not adjustable for height like the other Multis’. But it seemed comfortable, and at 870 mm is only moderately tall for a big adventure bike. (There are 20 mm higher or lower options.) Despite its shallower geometry and longer wheelbase the Enduro was respectably manoeuvrable at slow speed.

And its chassis performance was excellent on the open road too. As you’d expect with all that travel the ride was plush, whether the Ducati was floating over village speed-humps in Urban mode or flattening smaller bumps on its firmest setting in Sport. Most of the 140 km afternoon route was on twisty roads, where the wide bars’ leverage helped the bike steer precisely and easily despite its more relaxed geometry (rake is 25 rather than 24 degrees; trail just 1 mm longer at 110 mm, due to an offset front axle) and longer wheelbase.

No doubt the other Multi models with their shorter suspension travel and 17-inch front wheels would have felt slightly sharper, but the Enduro gave away little while providing a very stable ride. The only times I really noticed a drawback was occasionally when using an extra touch of front brake on entering a tightening turn, when the forks dipped noticeably unless I was very gentle with the lever.

Then again, the Enduro’s Brembo Monobloc front calipers are plumbed with Bosch’s brilliant cornering ABS system, so in theory I could have grabbed a big handful without worrying. In normal use the stoppers were predictably powerful. The Enduro also follows its Super Adventure and Tiger Explorer rivals with a useful “hill-hold” feature that locks either brake with a firm press of lever or pedal when the bike is stationary.

That’s just one more on a list of standard features that also includes cornering headlights, keyless ignition, Bluetooth integration, an under-seat USB socket and a centrestand. Mind you, the Enduro doesn’t come cheap, especially as most will undoubtedly be enhanced with accessories such as the Touring Pack of hot grips, handlebar bag and those broad but beefy Touratech panniers.

The classy Multistrada Enduro isn’t a bike for everyone; and for some serious adventure riders its chain drive will remain a major flaw. But the Enduro’s all-terrain ability and toughness add a new dimension to the Multistrada, finally justifying Ducati’s old advertising line about the Multi being four bikes in one. It’s an exciting, characterful, hugely capable machine that is arguably as complete an all-rounder as any of its rivals in the class.