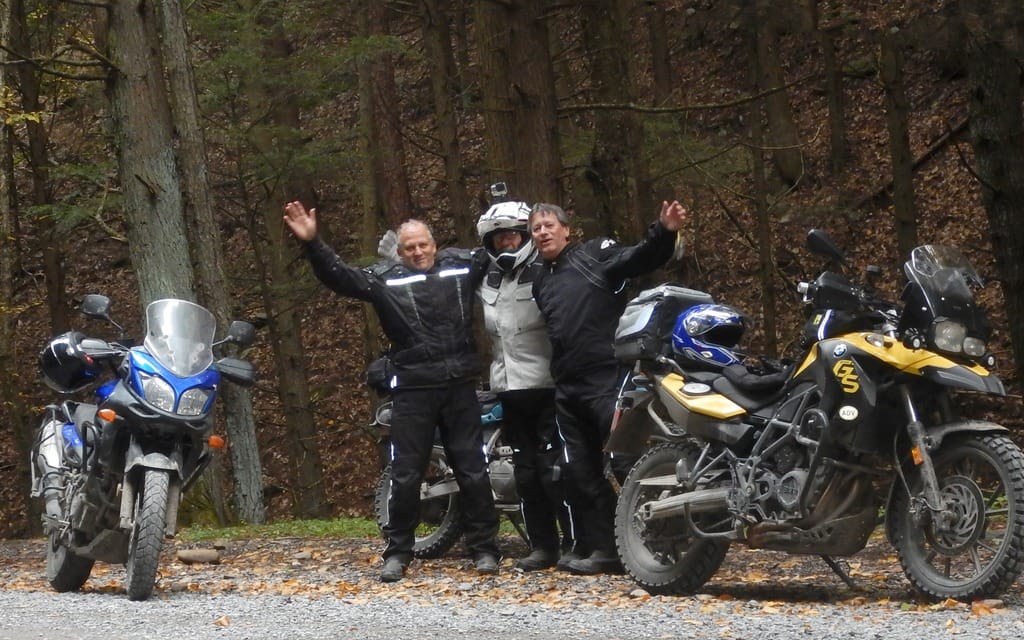 It was a chance meeting with a past riding buddy from Ontario that led to the planning of a trip to Canada from New Zealand and a gravel road motorcycle adventure in the fall of 2015. Emails were exchanged and enthusiasm grew over evenings spent planning the best back roads to ride.

A KLR 650 Kawasaki was available, courtesy of Rob. Dates were set, flights booked and a new set of knobby tires fitted. Phone calls to people that had recently used roads commonly maintained for timber milling and oil contractors uncovered plenty of interesting areas for exploration. There were places belonging to friends we could call on for accommodation at various stages along a northern route, supplemented by several motel stops. The map was carefully consulted and possible roads discussed via emails and coloured lines on pages saved in Google Earth for adding to the GPS later.

The clock sweeps back when I recall motorcycling for almost a half century, beginning when I bought a yellow Yamaha YD80 with carefully saved wages from summer holiday jobs. It was a two-stroke commuter model that survived my “performance mods,” get-offs, and basic neglect. I transformed it into a “dirtbike” by adding knobby tires and a flared rear guard to make mud fly. Reckless hours of hand-tingling riding on my parents’ property in southern Ontario spread the passion amongst future riding buddies. The intervening years riding a bevy of bikes introduced me to great friends along fantastic trails in different countries. The feeling of floating wheels when riding gravel roads is something everyone should experience in the big outdoors on back roads.

Our Autumn Epic route was planned in two legs: a six-day meander through the Niagara Escarpment, looping up through Ontario, passing through the Big Chute area in Muskoka, then north to Capreol, Timmins, and into the Arctic Watershed. Our plan was to ride as many back roads as we could, enjoying those of gravel surface in manageable distances each day, making time for viewing points of interest, riding back through a section of especially fun curves or meeting new friends.

In autumn the scenery through northern Ontario was fantastic, so many colours reflected in stunning vistas from forest and sparkling lakes fringed with smooth boulder outcrops or majestic trees. The wildlife presented amazing viewing on back roads. Encountering moose, deer, fox, wolf, eagles and crows sharpened the eyes and filled my camera, capturing memorable photographs to show people at home in New Zealand. At this time of the year riding a motorcycle through the farming and forestry regions brought a multitude of fruit and vegetative smells directly to the sinuses. I love the smell of a campfire towards the end of day, passing people enjoying the evening airs when my stomach is beginning to rumble, dreaming of the night meal.

We clocked up 2,670 kilometres before servicing the bikes in preparation for another six-day leg in a southerly direction. I am impressed by how well the bikes hung together with only minor adjusting and retightening. The southern route took us on some of the busiest freeways of the whole trip. This time crossing the border south into United States through New York State en route to the wooded hills of Appalachian Pennsylvania. After crossing at Buffalo we headed south, the roads gradually changing as we entered Pennsylvania and the hills rose to meet us. We set up camp at Little Pine State Park, staying in a yurt for five days while we rode all the gravel roads on offer (some several times).

We experienced a series of wonderful backcountry roads in the Black Forest and spectacular vistas in this amazing Appalachian region. Attracted to the pleasures of riding gravel at speed, it was a treat to visit this region learning a few new names like Susquehannock. The backcountry park roads were great for motorcycle riding, winding through wooded areas on sweeping banked corners with hardly any traffic about. Whoever designed these roads certainly had their pencil set for sweet motoring lines along ridges and down through valleys. Brushing past tree branches, the bikes thumped steadily in gradual uphill sections, then swooped down on the far side. Rolling the throttle on in top gear, barely using the brakes, I imagined tires working hard and concentrated on keeping the knobbies gripping true. Stopping for the occasional break to stretch legs and take a few photos, we covered almost 5,000 kilometres. Wherever we stopped, people at cafes and petrol stations were friendly and wanted to chat, sharing their motorcycling stories.

There will be more epic North American motorcycle adventures on back roads of flowing gravel.