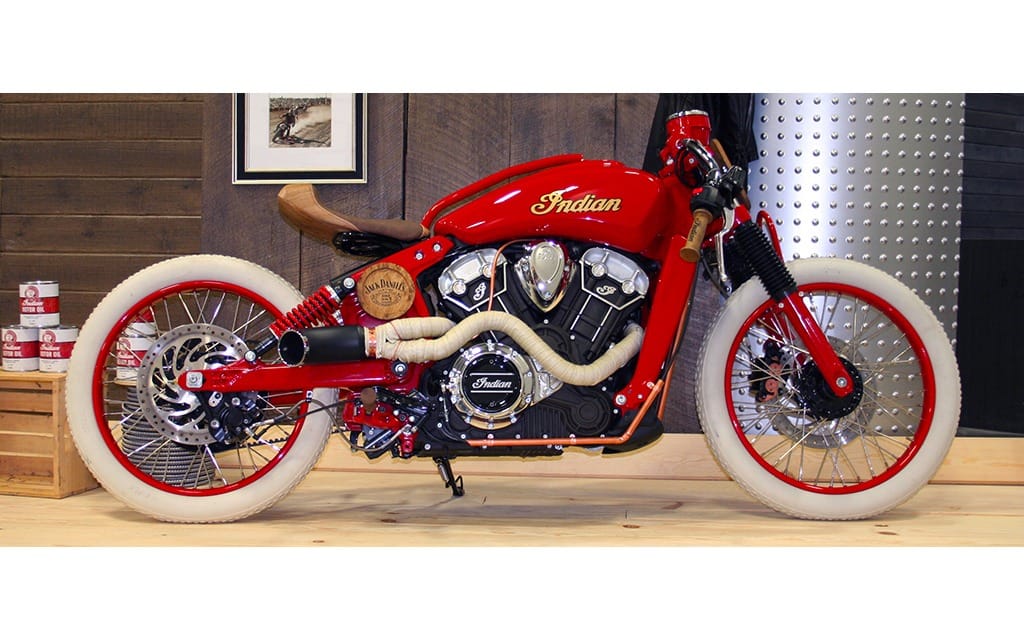 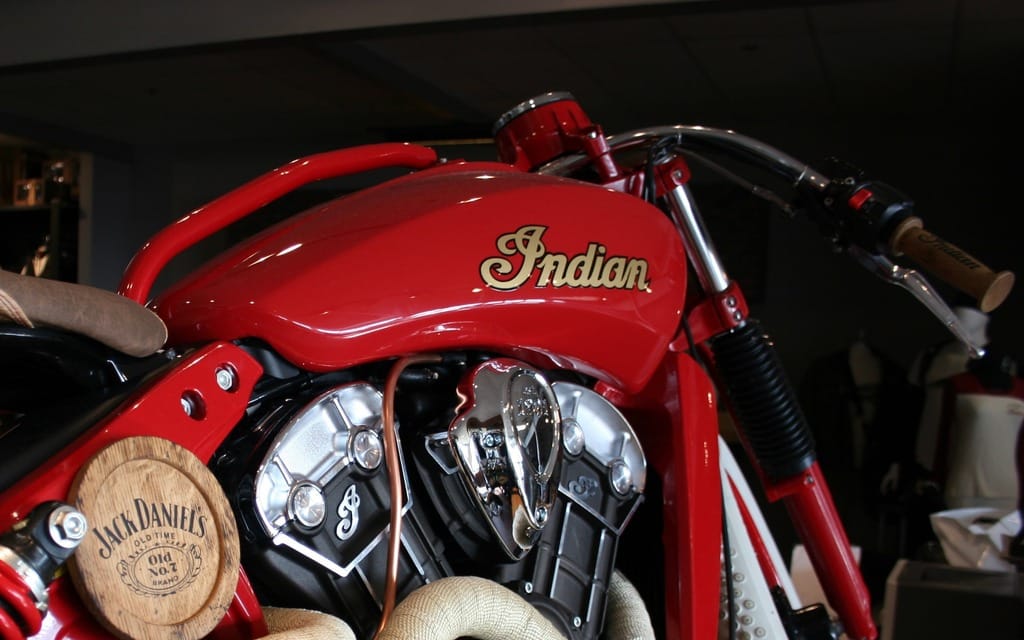 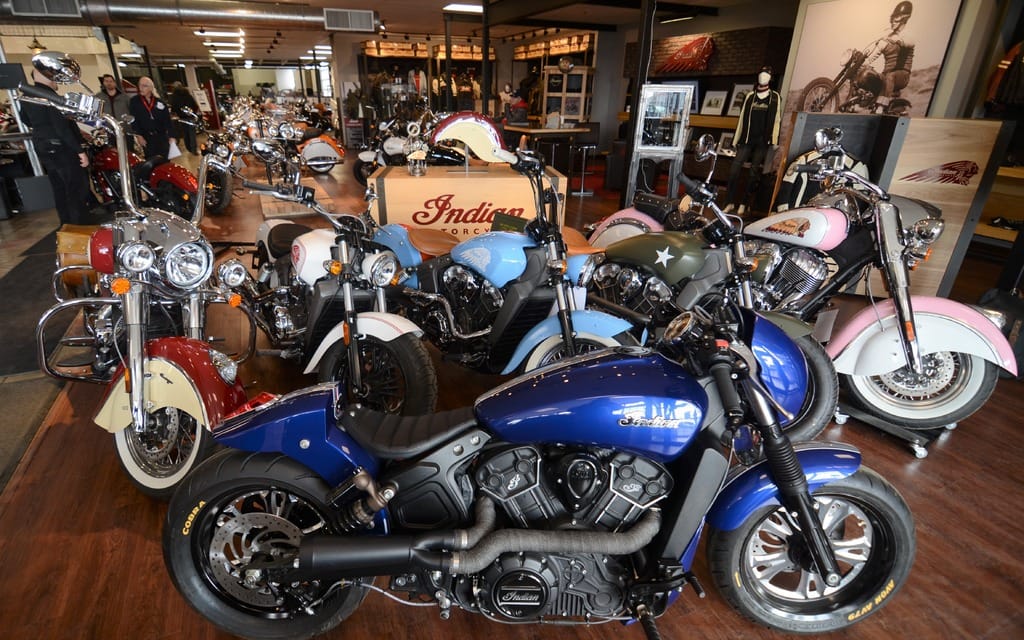 Inspired by the past

The modified machines were voted on by fans on the Indian Facebook page. Three finalists were taken to Daytona during Bike Week 2016, where a final vote by members of the motorcycle press gave the win to the Motos Illimitées (MI) entry.

The winning machine will now join the Indian legend next to the world-famous “World’s Fastest Indian,” the iconic 1920 Indian Scout modified and ridden by New-Zealander Burt Munro to establish speed records at Bonneville during the late 1950s and early ’60s. Both bikes will take part in Indian’s promotions as part of the 2016 Hot Bike Tour, held September 7–11 in the mountains of North Carolina and Tennessee.

Dealer participants had to create a Scout-based machine that included at least three items from the Indian accessories catalog. That was the easy part of the deal, as BoardTracker needed more than 100 parts sourced from Indian and various specialized suppliers, as well as other parts fabricated in-house.

MI co-owner and project leader Lynn Landry, along with key staff members, jumped at the opportunity to showcase MI’s in-house skills and image when the contest was announced last November. Landry could not walk away from such a challenge. “The go decision seemed obvious to all of us during early discussions late on a Friday night, with a little wine to stimulate our imagination.”

Lynn added, “I knew that we had the skilled people in-house to build something special, to move up a notch from the customized paints and equipment we have been supplying for a few years now.”

The contest was also a shrewd move on the part of Indian. Like other high-end manufacturers such as BMW, MV Agusta, Ducati, and Yamaha, Indian has been using well-known independent designers to create imaginative models as concept or limited production models, and as a global focus group to gauge reaction to new ideas and bikes.

These special bikes are normally based on an interesting entry-level bike, such as the Indian Scout in the case of BoardTracker. Both Indian and Victory have used designers such as Roland Sands, the Ness family and other well-known builders from America, Europe and Asia. These exclusive machines are usually shown at major events such as the Milan Bike Show, Daytona Bike Week or Sturgis to generate interest and gather feedback. This information is then applied in the development of new models.

The MI team recreated a board racing machine, like those used in the 1920s on banked wood-surfaced tracks across America. These special machines raced on tracks ranging from a quarter mile to the famous mile-long Los Angeles Motordrome, where they reached 160 km/h. Carburetion and throttle control of the day were not refined enough to control the bikes safely, so they ran at full throttle all the time. The riders managed speed by using the kill switch. When a rider fell, splinter injuries were likely.

As one can imagine, the sport was dangerous for riders and spectators, and the 1929 financial crisis killed off factory and private teams, as well as track owners and spectators. But the unique look and configuration of the bikes left its mark with the truly fanatical. Building a board racer pretty well ensured that the MI entry would be unique.

Back at MI, Landry drove the project with the creative help of her two daughters, Kim who manages finances, logistics and paperwork, and Kara, whose imagination is boundless. Designer Pascal Royer, a fellow driver of the project and MI sales manager most of the workday, has been a student of the motorcycle form all his life. “As a kid, I was imagining different bike shapes 24 hours a day. Practicality never entered into the equation at the time, as I never had the resources to actually build a complete machine until I came to work here (MI).’’

Lead builder Vincent Ouimet is just as infected as Pascal with the customizing virus. “I cannot see a bike without imagining what I can do to add style and beauty, at least according to my taste.” A second builder, Yves Dugay, has just come on board, and a growing order book will keep them busy over the coming months.

Basic design, logistics, fabrication and assembly are handled in-house. Painting, saddle work, powder coating, complex machining and welding are subcontracted to committed experts. A dedicated work area in the dealer shop includes basic machine and metal working tooling, to increase productivity as well as produce special pieces for the general sales side of the business.

These days, the build team is busy assembling two more BoardTracker models that have been pre-sold as well as producing various sample models for display in the showrooms of the two MI locations. The demand for lightly modified bikes keeps growing, and the team must feed that monster with custom paint jobs, seats, bars and simple accessories.

With growing local and international sales volumes, the success of the customizing venture ensures its growth. Lynn and her team already have plans to go big with a distinctive corporate name and approach to the market with its mixed male and female touch.