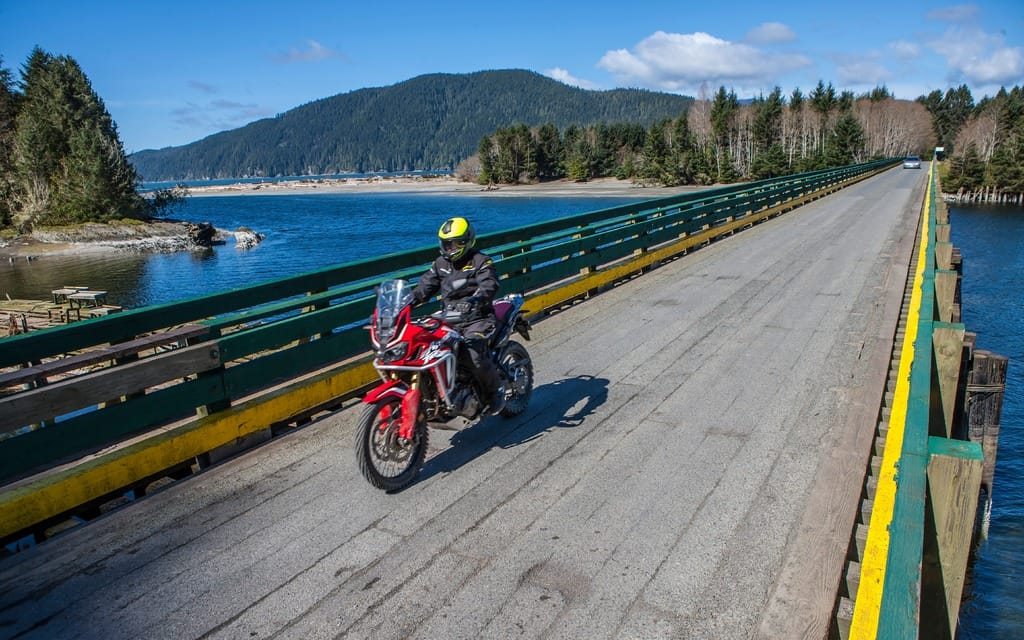 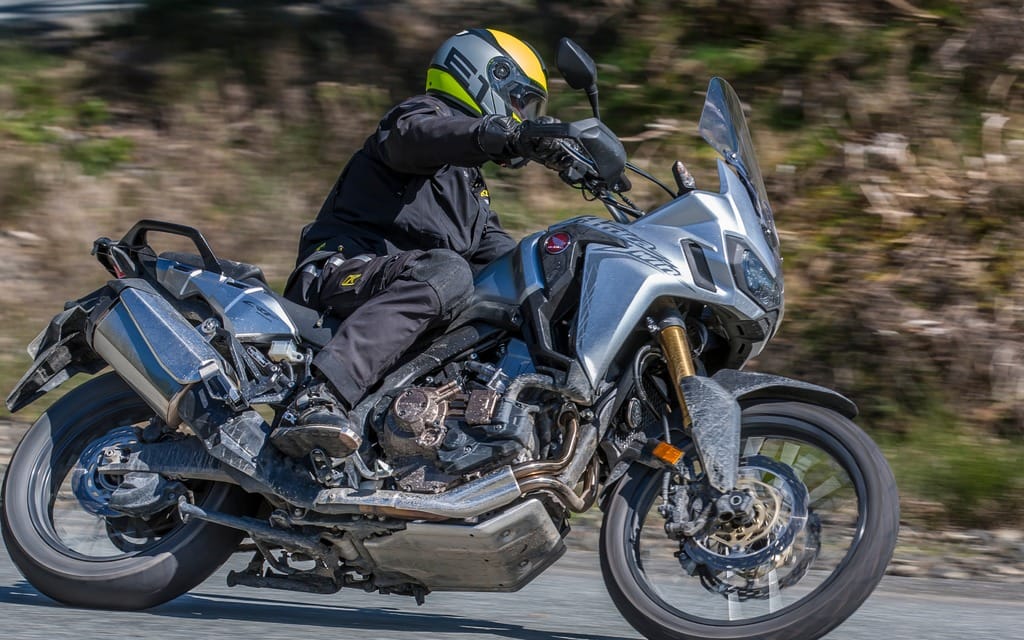 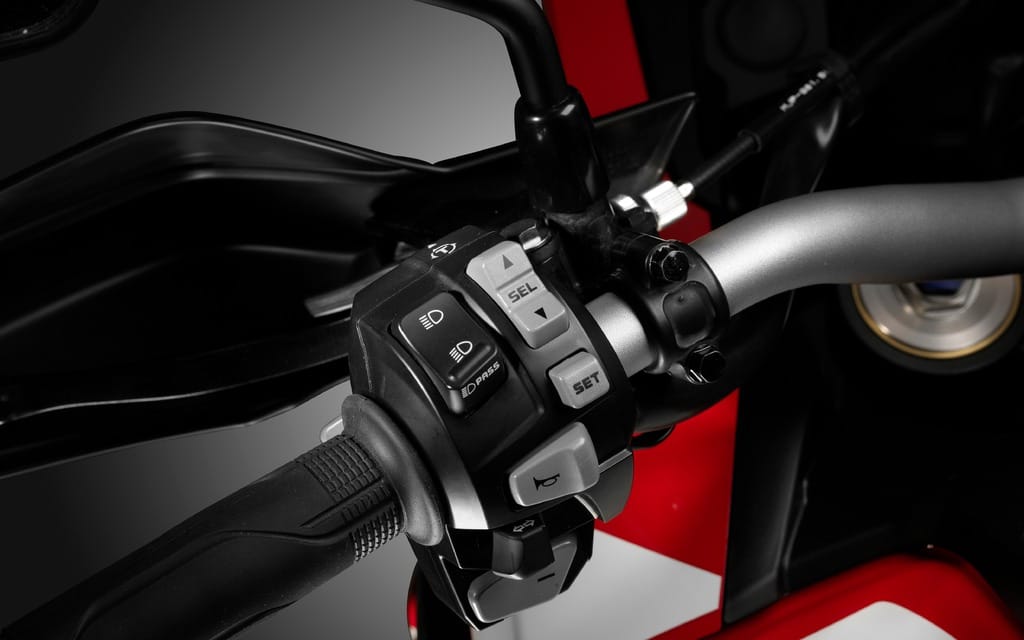 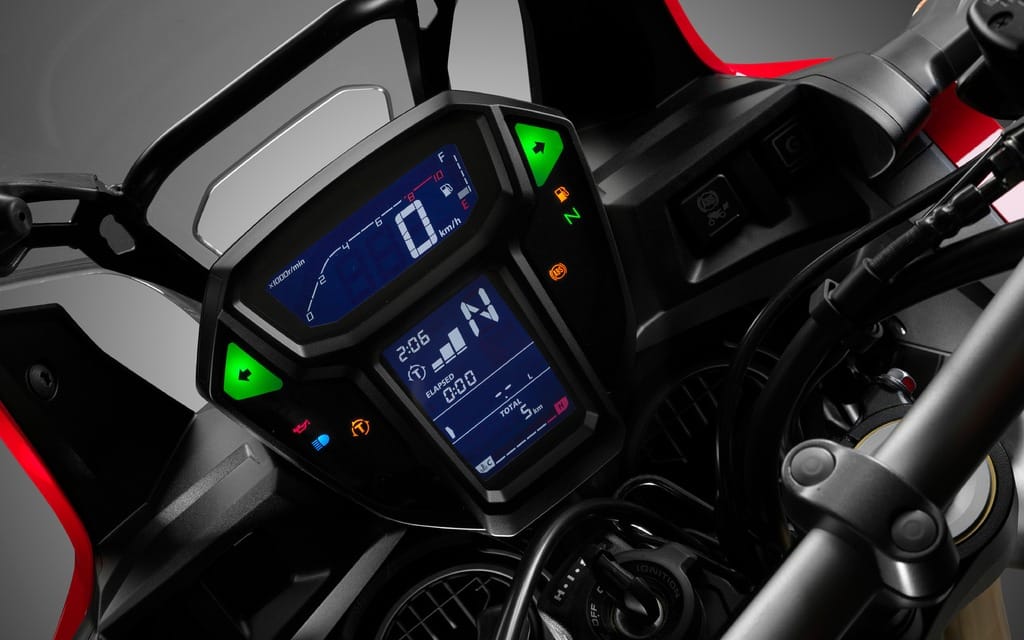 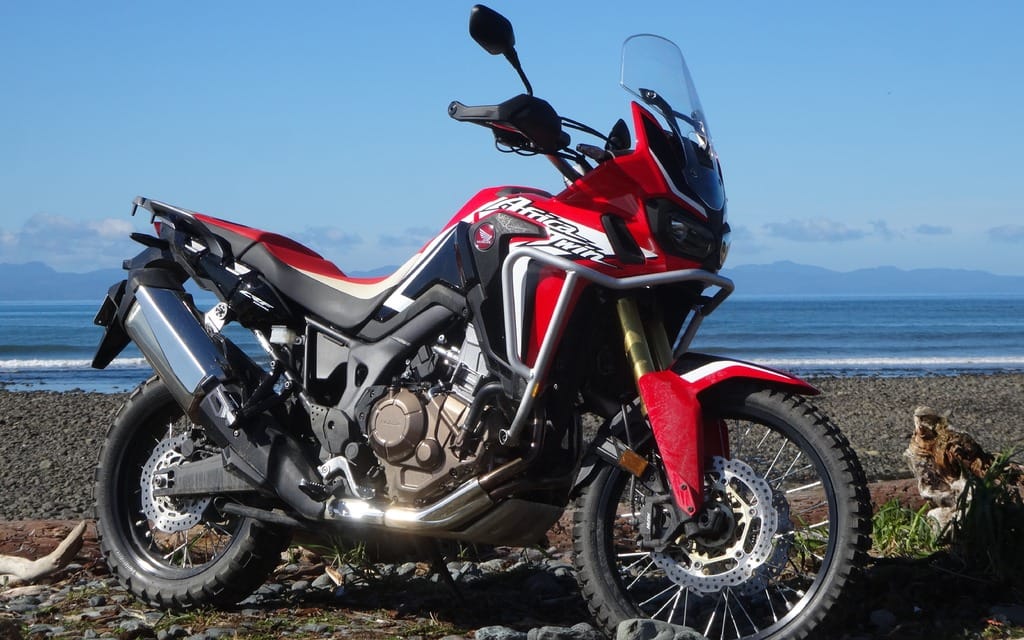 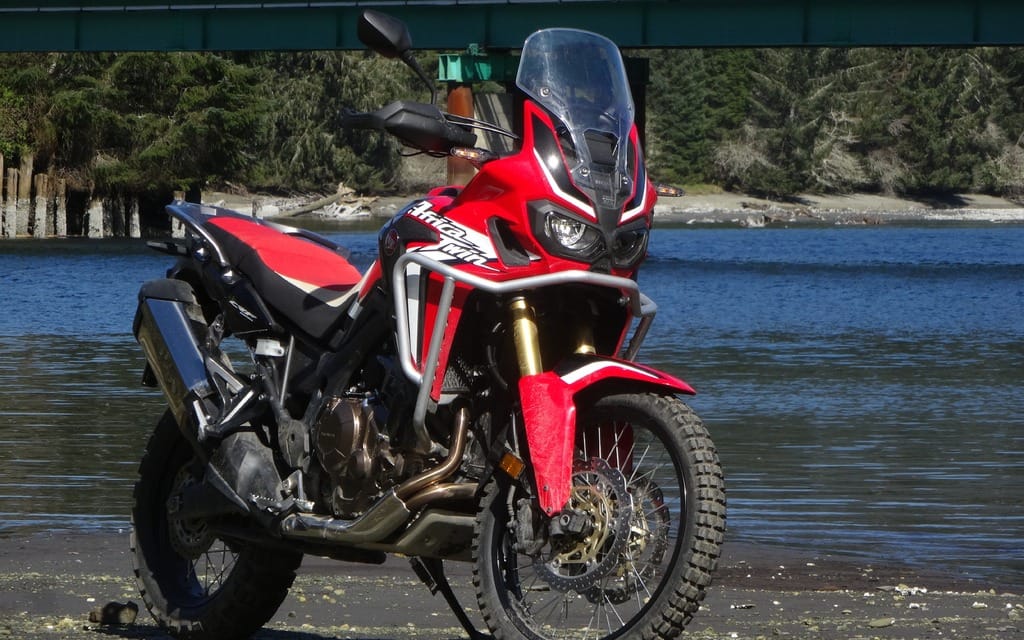 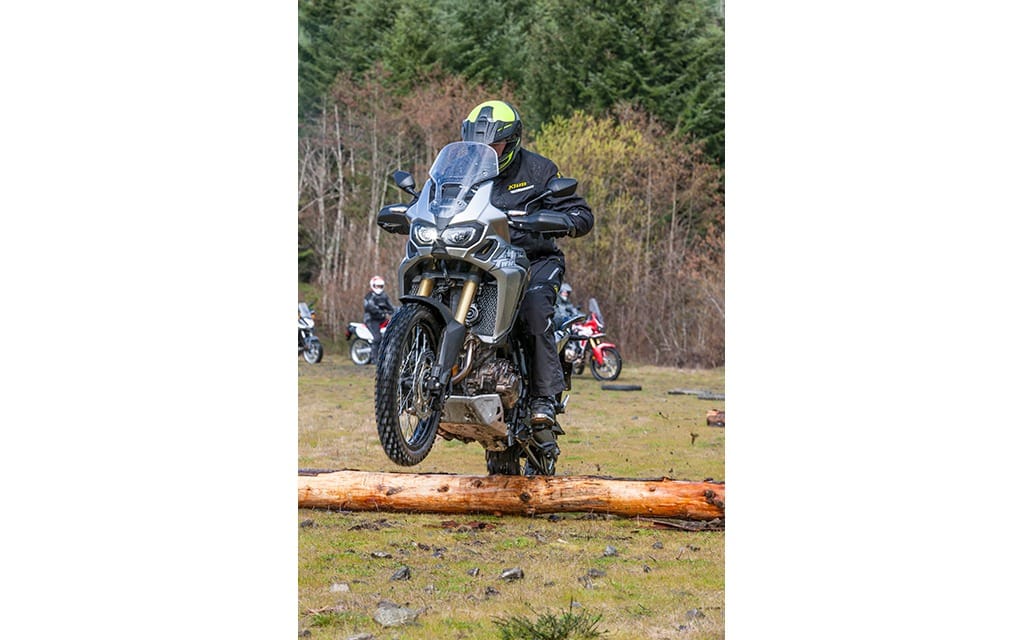 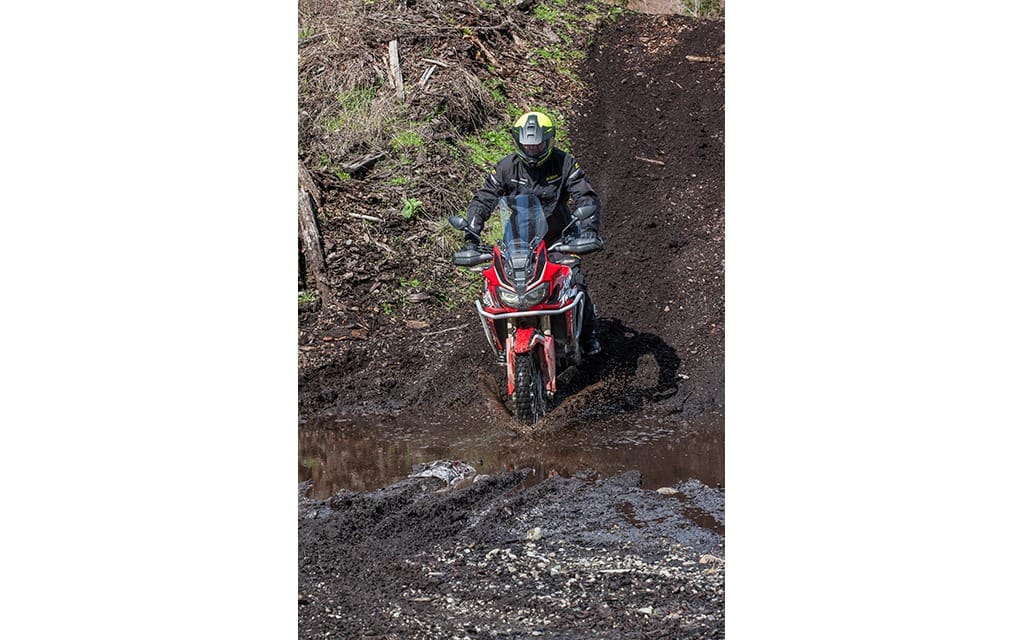 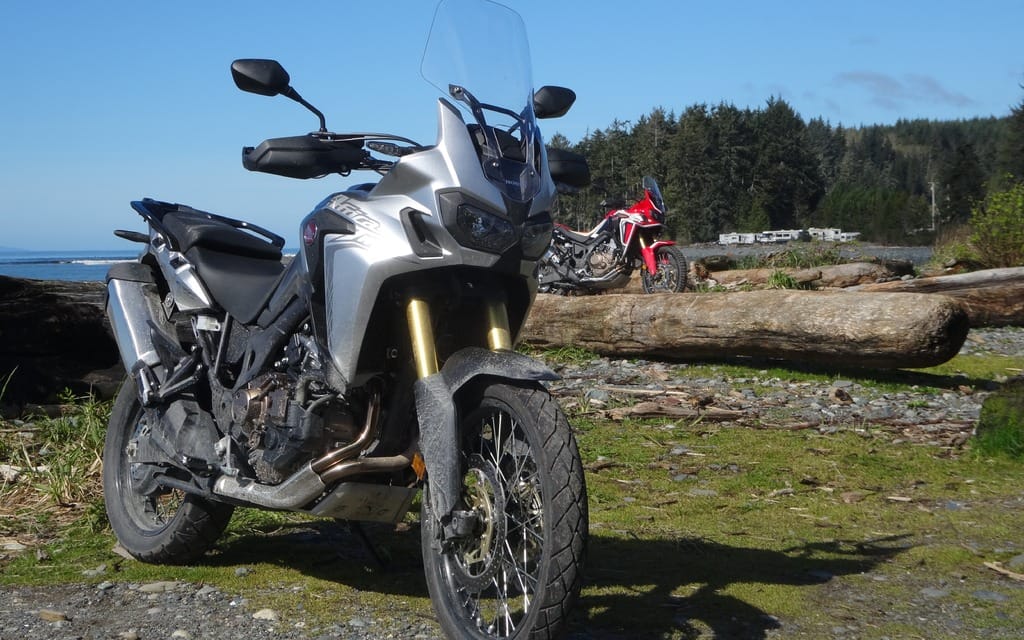 Honda exercises reasonable restraint and delivers an ADV that, dual clutches be damned, really can do it in the dirt
By David Booth

The worst part about motorcycling’s horsepower wars is how infectious it all is. Despite decades-long predictions of abatement, sportbikes are still relentlessly marching on to irrelevancy. Three-hundred-horsepower, supercharged superbikes make about as much sense as flying cars, but Boomers ended up buying every single one Kawasaki produced—and at a ridiculous premium. Ditto 205-hp Panigales, which, virtually all motojournalists acknowledge, is unrideable in all but the most perfect situations. One-thousand-cc sportbikes seldom see full throttle; the outrageous horsepower their owners covet so assiduously on magazine covers scares them witless in real life.

Even more stupidly, this “too much is never enough” mentality has now infected adventure-touring bikes. To judge by the headlines perpetuated by the wonderstruck wanks in mainstream motorcycle media, one now “needs” 150 hp if one wants to go off-roading. Read any road test of a modern ADV bike, dissect any comparison of the KTMs, Ducatis and BMWs that rule the division, and the only thing that seems to matter is how rapaciously your big twin can abuse a dynamometer. KTM’s 1290 Super Adventure claims 160 hp, Ducati’s “Enduro” but two less, and even traditionally conservative BMW had to boost its R1200 Boxer Twin to 125 horses to stay relevant. Meanwhile, Suzuki’s modestly motored V-Strom is universally denigrated and Aprilia’s otherwise brilliant Caponord is dismissed as “nice but not nearly sporty enough.” Versatility—the very reason adventure bikes were developed—be damned, we want wheelies.

Into this fractious fray steps the (long-anticipated) return of Honda’s Africa Twin. Legendary, at least in Europe where it was sold as a 750 from 1990 to 2003, the CRF1000 wears its seemingly out-of-touch practicality as a red badge of honour. Indeed, Honda is betting the farm that adventure tourers—or at least some healthy portion of them—really want the promise of a touring bike that can capably traipse off-road. Or, more accurately in the case of the Africa Twin, a dirt bike that can comfortably get you to a motocross track.

Play down the fact that it boasts “only” 94 hp? Not a chance; Honda is gambling that manageability will trump excess for people who understand there’s more to adventure than wheelies and smoked rubber. Fancy electronically adjustable suspension thingamabobs? Too heavy where you’re bumping over logs. Thirty-litre gas tanks? Fine, if you like to pretend you actually do ride 500 kilometres at a stretch, but their high centres of gravity turn ponderous when you’re “adventuring” up a mud-strewn incline with a nasty switchback at the crest.

Honda’s commitment to this the-fun-only-starts-when-the-pavement-stops theory of adventure touring is total. The engine eschews rev-happy double overhead cams for its Unicam actuation simply because it lowers the centre of gravity a smidge. The engine is a compact parallel twin (about the same outward dimensions as the NC750’s powerplant, in fact) because a V-twin wouldn’t allow the placement of the battery and other heavy electrical bits right behind the cylinders for better mass centralization. The only front wheel available is a 21-incher. It’s not, as is common in this segment, a specialty option. The front tire—a 90/90-21—is so skinny that it makes the rubber on a Royal Enfield Bullet look “phat.” The Africa Twin, more than any other mainstream large-displacement adventure bike, is completely devoted to getting down and dirty.

And it’s very effective. Most appreciated is that it’s relatively light. I know 211 kilograms can hardly be described as featherweight, but compared with BMW’s standard-bearing R1200 GS Adventure, the Africa Twin feels positively motocross-ish. There’s little difference at gravel-road speeds, but on a tight trail way out in the boonies, the Honda is just so much easier to toss about. The class-leading 2.5-metre turning radius makes trials-type plonking easier. And that comically narrow tire turns more easily, not to mention digs into mud and sand for better traction. Whoops—yes, we at least pretended to motocross the big Twin—don’t pound you quite as much. Indeed, not only does the CRF’s relatively light weight encourage you to greater hooliganisms, it also punishes less your inevitable lack of talent. Picking up a fallen Africa Twin is a lot easier than the Herculean task facing the owners of a stricken BMW Adventurer. Seriously, the farther off the beaten path you plan on exploring, the more sense Honda’s “compromises” make.

The engine is a welcome “buddy” in all this adventuring. Throttle-only power wheelies may be beyond its 94-hp purview, but its linear low-end torque is the meal ticket when even hardcore Continental TKC 80 knobbies struggle for grip. In tight going, the 998-cc parallel twin can idle around in first gear, sans throttle, with little fear of stalling. Gas it up and there’s no manic burst—unless you want it—of traction-challenging wheelspin. Even the requisite traction control system is well calibrated for off-roading. The most conservative of the three settings is completely counterproductive unless you relish the throttle response of a 50 cc scooter. But the most liberal mode is quite useful when slithering up slimy hills. Hit the gas hard and let the traction nanny determine what combination of wheelspin and grunt will best scale the incline.

Which brings me to possibly the most contentious recommendation this road test will make, namely that Honda’s Dual Clutch Transmission may be the optimal choice for those with aspirations to mud and bog. You read that right, the automatic tranny may be better for off-roading. Yes, I know you’re scowling.

First off, for anyone not named Gaston Rahier, not having to worry about clutch feathering or stalling when you’re trying to manhandle a 500-pound gorilla through your 47th mud bog in eight miles is a welcome relief of task focusing. What little strength you have left is best devoted to just staying upright. Ditto climbing hills, squirting off berms and, yes, I was surprised, too, even when sliding on gravel roads. A couple of toggled downshifts gets the rear wheel sliding, all without the need to lock the rear brake or feather the clutch. Indeed, after two days of serious dirt donking, the only detriment I could find to off-road DCT-ing was the inability of the dual clutches to mimic the sensitivity of your clutch hand when you’re tiptoeing through a U-turn on a tight trail. The clutch engages too suddenly to allow a graceful feet-up about-face. Safer, if somewhat graceless, is a shuffling, feet-down newbie-style about-turn.

However, I am a little less convinced of the efficacy of the dual clutches in street riding. Oh, the CRF’s automatic mode makes easy work of the urban commute, shifting appropriately and quickly as you thread your way through traffic. It’s just as satisfying on the highway where the dual clutches are quick to downshift past a lumbering semi. The problem lies somewhere in between those extremes, when a sudden need for explosive acceleration/downshifting is often ignored. Then, when you’re finally past traffic, the DCT holds onto the lower gear way too long, the big twin thundering away unnecessarily. It’s annoying, to say the least, and you almost always end up manually upshifting via the up/down transmission toggles on the left handlebar. There is some good news, though. This is not a mechanical fault; the solution will be an easy software update as soon as enough owners make their ire known to Honda.

The CRF’s competence on the street extends well beyond transmissions. Naturally, it won’t pop wheelies off the throttle like a KTM Super Adventure, or win a drag race against a Ducati. On the other hand, it has all the torque—72 pound-feet at 6,000 rpm—a touring bike needs. The suspension, so compliant in the dirt, is firm enough for (semi) sporty back-roading and, thanks to the novel (for a parallel twin) 270-degree crank, it is both sonorous and smooth enough to pass for a V-twin. Shifting the six-speed manual box is made easier by a slipper clutch that also reduces lever effort. Those needing the reassurance of a clutch lever—not to mention saving a thousand bucks—will not be disappointed.

Nor will there be much dissatisfaction with the CRF’s creature comforts. For instance, the fairing may be off-road minimalist, but, for once, a manufacturer’s claim of aerodynamic testing passes muster, the Africa Twin’s fairing punching a larger hole in the wind than its dimensions might suggest. Ditto the windshield. Indeed, despite being still relatively tiny compared with the barn-door screens of some touring bikes, the Africa Twin’s optional taller windscreen provided the best turbulence-free still-air envelope I’ve ever encountered this side of a Gold Wing, testament to the screen’s curved shape and aerodynamic side slits/centre venting. For my 5-foot-11 frame, the optional screen was perfect; those 5-foot-10 and shorter preferred the standard windshield.

The riding position, like most adventure bikes, was sport-touring comfy and, thanks to the dirt bike handlebar, standing up—not just for bumps, but also to stretch knotted muscles on extended rides—was a welcome respite. As for seat comfort, it’s too soon to tell since our street riding was kept relatively short. But the rider’s perch, at least, is nicely padded and fairly flat, if a little (dirt bike) narrow.

Complaints are few. The instrument cluster is too small and looks dated. The DCT’s up/down shifting toggles are somewhat awkwardly placed; playing silly buggers on a long, twisty backroad will soon cramp your thumb and forefinger. But, this is surely the measure of how good the new Africa Twin is—and how well received is this latest version of Honda’s Dual Clutch Transmission—that the single largest complaint voiced by the assembled throng of Canadian motojournalists was that the DCT tranny is not (yet) available in Honda’s traditional red, white and black “Rally” colours. For some reason, that probably only makes sense to some MBA marketing maven, opting for the high-tech transmission means clothing your Africa Twin in a boring silver hue only a Toyota Camry owner could love.

But there is one last reason to adore Honda’s new adventure tourer. Not only is the Africa Twin’s minimalism off-road worthy, it’s MSRP-friendly too. Africa Twins start at $13,999 and even the all-singing, all-dancing DCT versions cost just $14,999.