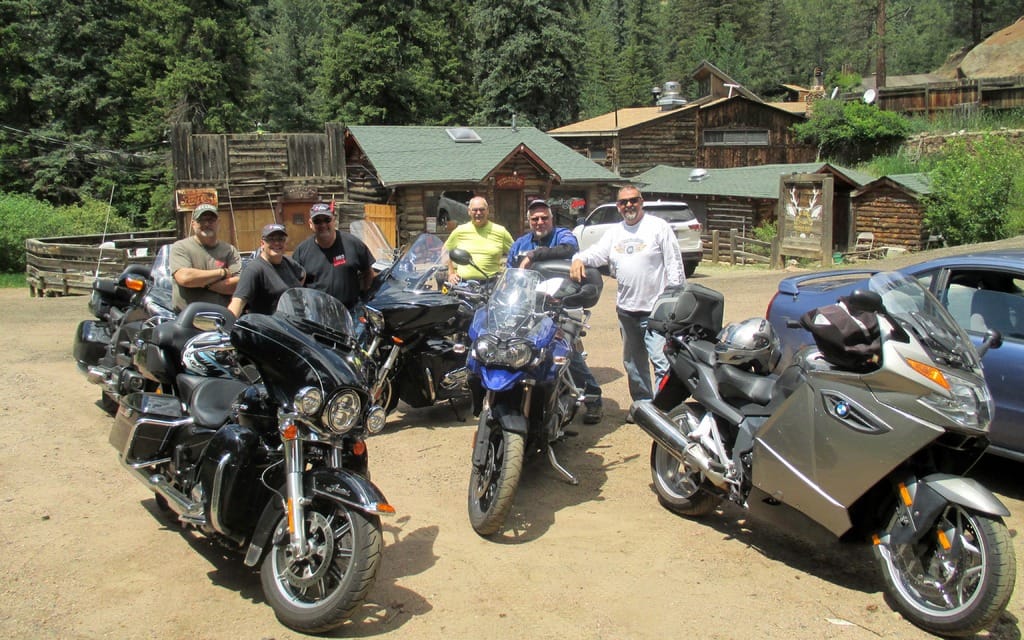 When God piled up the Rocky Mountains He made a barrier between east and west. He saw that it was good, with peaks and valleys and the awesome wonder of nature. He said, “It will come to pass that people will find their way through the passes, and when that day comes, I will give them motorcycles.”

Before departing our meeting place in Kansas City for a trip to Colorado, a middle-aged waitress overhears our destination. “Bring me back a little,” she whispers. Colorado has legalized marijuana, but to her disappointment we’re in search of a different kind of Rocky Mountain high. We head out the next morning and soon catch our first glimpse of the distant mountains.

Braving the horrendous traffic in Denver gets us to Golden and a tour of the Coors distillery. Established in 1873 for $20,000, Coors survived prohibition to operate—allegedly—the largest single brewing facility in the world. The tour is free, the beer is cold, and Bob’s Atomic Burgers is across the street. They don’t take your name to call when your order is ready; they give you one. I’m Elton John.

Leaving Golden, Coal Creek Canyon Road winds along—you guessed it—the creek, mirroring the rushing water cutting through rocks. With spectacular views of forests, valleys, and mountain peaks, it challenges riders to keep their eyes on the road. The route along 119, 72, and 7 is the 60-mile Peak to Peak National Scenic Byway, which National Geographic proclaims the second best motorcycle ride in the U.S. (Behind California’s Pacific Coast Highway.)

Highway 14 out of Fort Collins echoes the bends of the Cache la Poudre River, a rushing, boiling ribbon in the rocks that forces the road to twist and turn the way a vacationing motorcycle rider dreams. Near Walden it curves through cattle country. Highway 131 out of Steamboat Springs is another terrific twister through red soil and rock. It crosses the Colorado River and connects to I-70, which we take to Avon.

Unless you’re 22 years old, the constant change in both temperature and altitude can be tiring. On Sunday we took 24 out of Avon, hooking up with 82 to Aspen. It was 56ºF when we left at 7:30 am, 72 up in the mountains by mid-morning and 105 in the valley in the afternoon. Altitude changes can be as much as 10,000 feet. We’ve dropped our usual practice of pre-booking hotels and planning an itinerary and are now simply allowing the ride to come to us. We never have a problem finding rooms along the way, which allows us to stop when we need to allow older bodies to adjust.

Independence Pass on the Continental Divide offers a stunning view of snow-covered peaks and the odd feeling you get while wearing summer bike wear as you watch people tramp across snow and ice using picks and poles to clamber around in what amounts to a mini polar environment.

Pine is an unincorporated community on Highway 126. From there we take Elk Creek Road, a one-lane trail of hard packed, twisting, gravelly road a mile up the mountain—praying no one is coming the other way—to the Bucksnort Saloon. Looking like a way station on the Pony Express, the Bucksnort features a ceiling covered in signed dollar bills and a patio overlooking a beautiful stream. Brave the road and try the half-pound Bucksnort burger. Out of Pine we take the 285 and make our way to Pueblo, which involves a combination of mountain and flatland riding. In a vision of the Old West, the flatland has at least three bison ranches.

Leaning your bike into a curve on a Colorado mountain road with a rock wall on one side and open air on the other is a singular experience for people from the flatlands. To be able to do it time after time for a full week, with great companions, leaves a person with a head and heart full of memories. But all good things end, this ride with a prayer: “Thank God for motorcycles.” Amen.