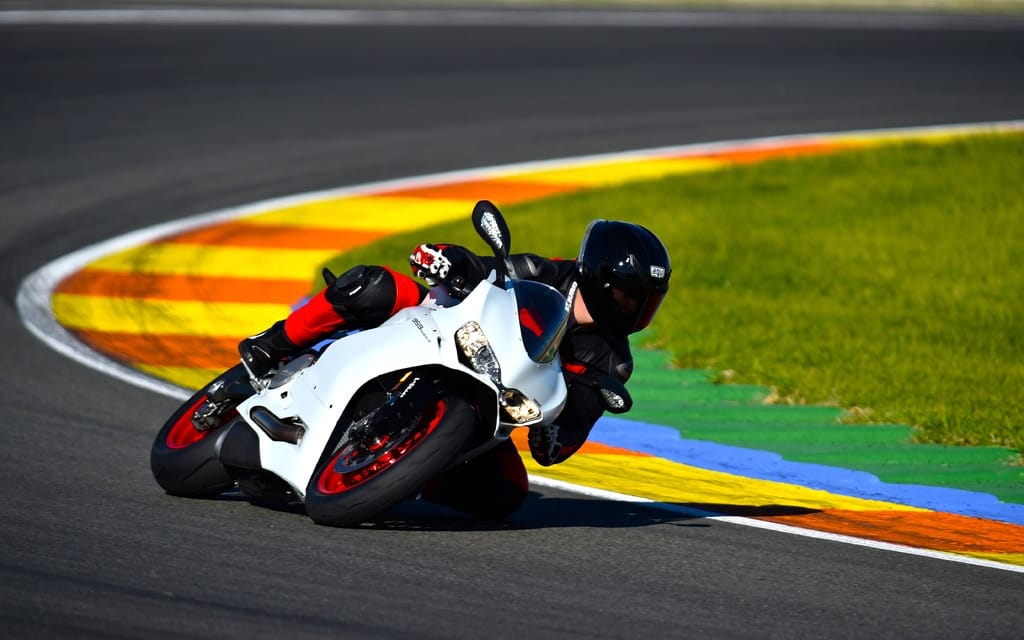 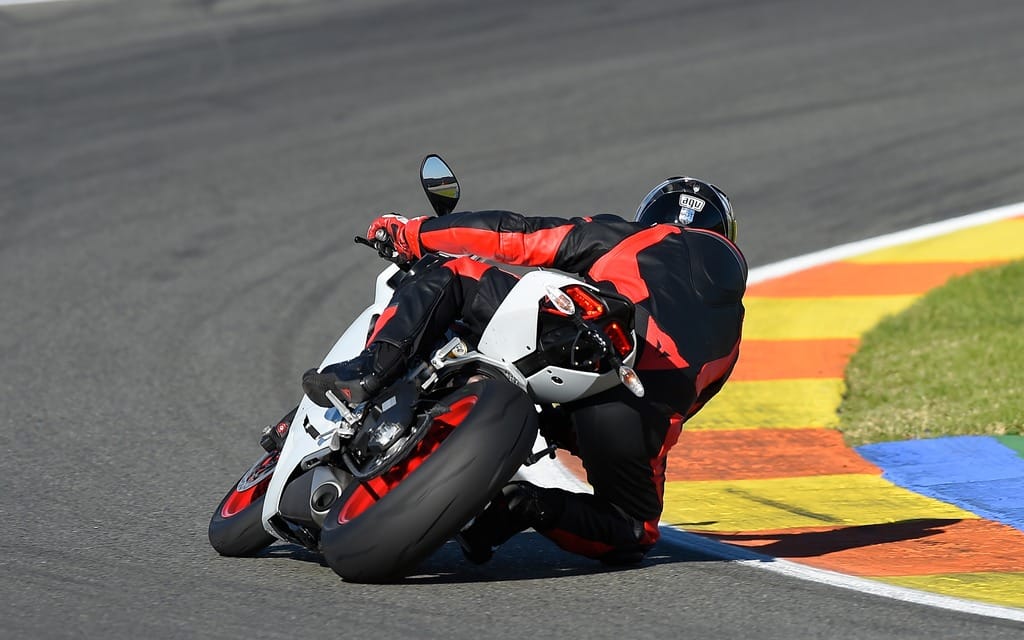 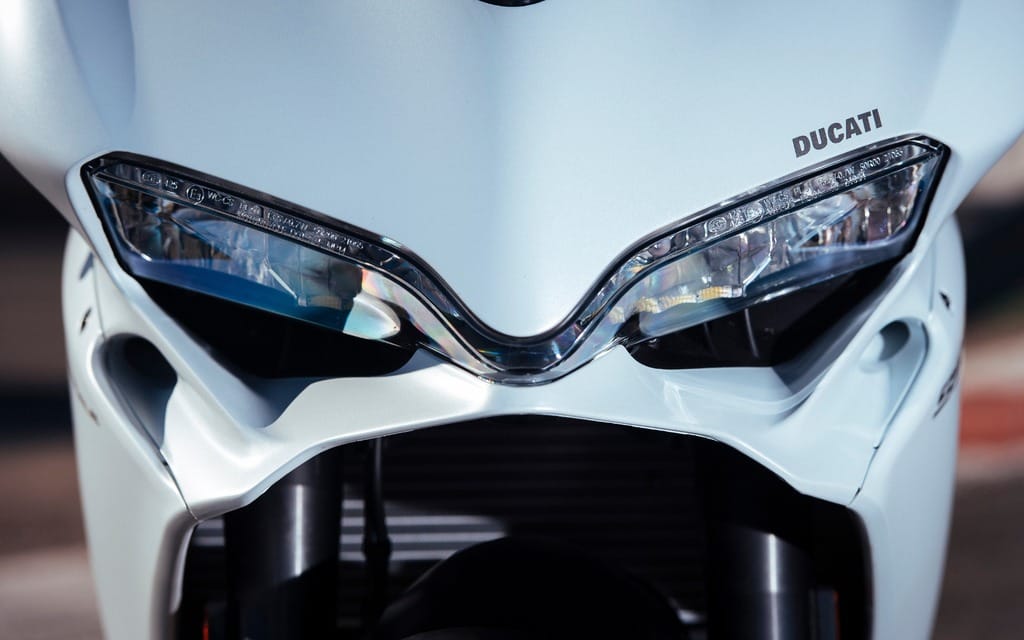 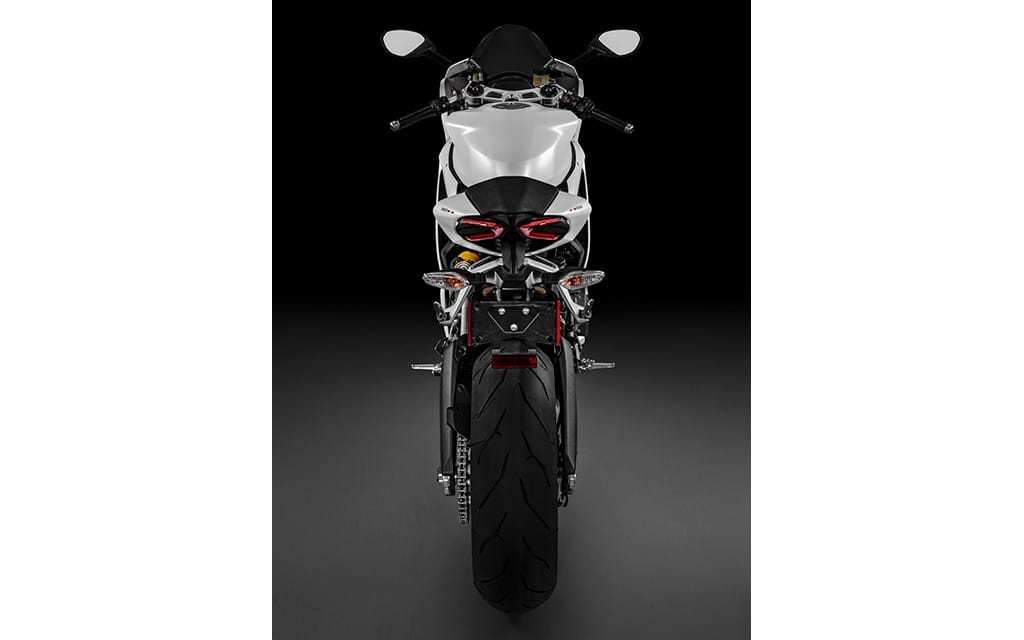 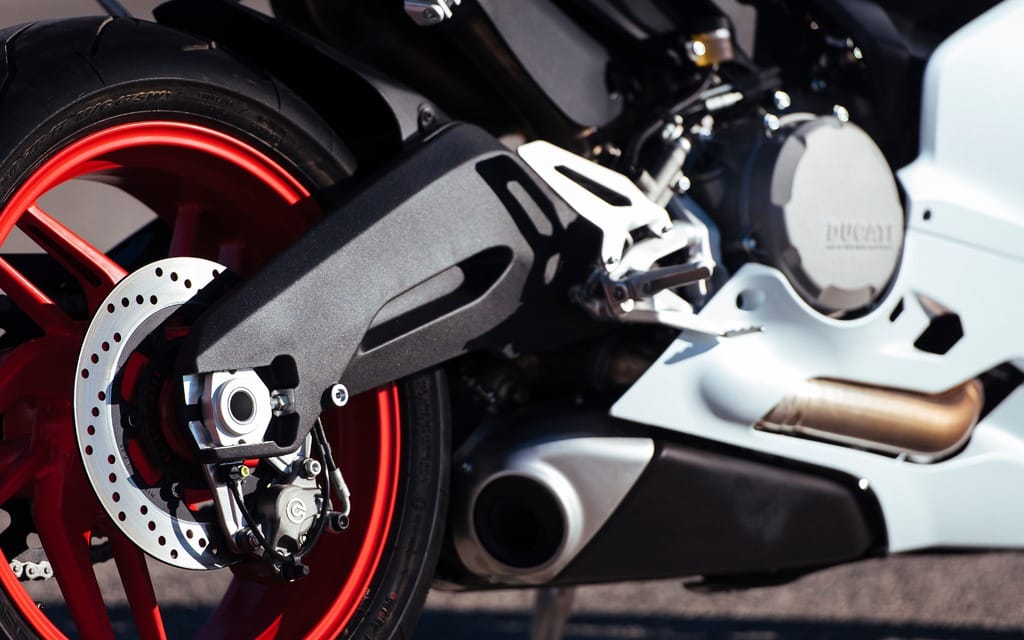 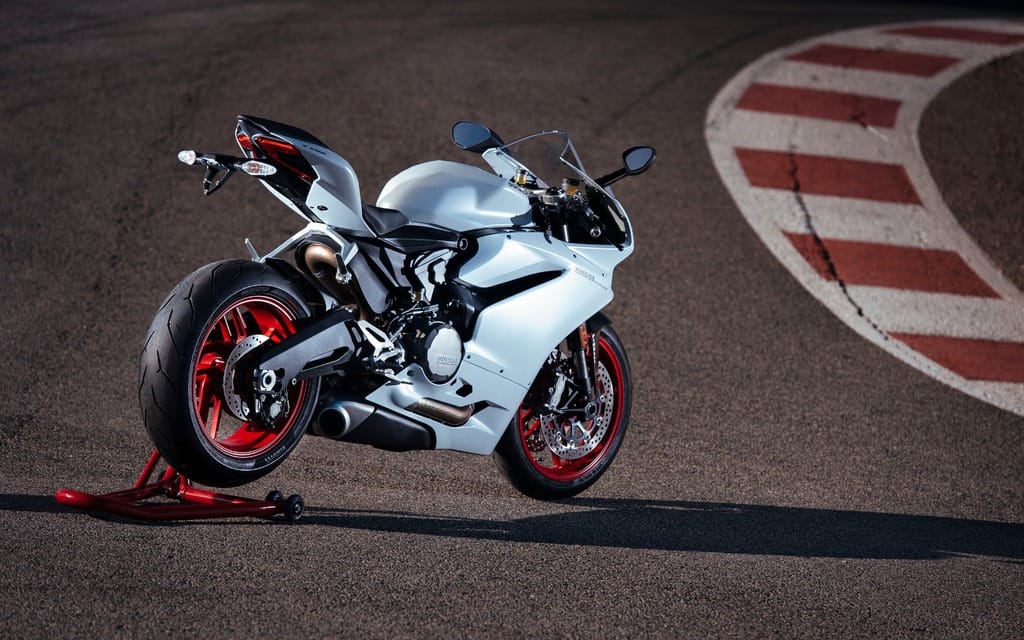 It’s no longer a middleweight, but Panigale 959 still gets the balance right
Racetracks are like calculus. Or they can be until you unlock their secrets. Valencia—Spain’s famed track that hosts MotoGP’s season finale—has a left-left-right-way-right sequence of corners that I bugger up horribly in my first session at the launch of the Ducati Panigale 959. And I even know the problem: I’m trying to rush it. (That’s at least a start. As for calculus, I didn’t know what it was in high school and I still don’t.) If I’d just slow down for a few laps I’d have a shot at figuring the corners out, but I’m overexcited, under-slept, and hell-bent on keeping the 20-something rider behind me behind me.

The first pair of lefts is simple enough. (That’s not entirely true. The first left is blind, and early in the session I follow a rider who misses the corner entirely and shoots off down a paved access road. I hate to miss a spectacular crash, so I watch to see if he cartwheels to the gods. He doesn’t, but by watching him I nearly ensure that I do. In too fast and too deep, I hang off the left of the 959, drop my sizeable head down as far as I can, and lean the bike down to where the footpeg grinds the track. And I make it, and add it to my list of five or six other corners in my career that I’ve taken as quickly as a professional racer takes every corner, every single time.) But I still can’t get that final right, right. And then I have an idea.

Press launch etiquette is that you don’t ride in the shadow of other riders. It’s bad for photos if you see someone (the competition!) hanging around your rear wheel like a dog with a full bladder. If the upside is photographs unsullied by others, the downside is that on an unfamiliar track you can get as lost as a man on snowshoes searching out the Northwest Passage. I need to find someone to follow, but I need to put my faith in someone who knows where he’s going—and wouldn’t you know it, just like that he arrives.

He is a Ducati test rider. His job is to ride fast motorcycles quickly. Every day. He passes me a few corners into the track, but the problem is that the section where I’m struggling is toward the end of the track. I need to keep up with him. I tell myself that if he can do it, I can do it. It’s massively delusional of me to think this way. Because a 14-year-old Chinese gymnast can stick the landing after dismounting the uneven bars, I should think I can? Never mind, I’ve clenched my jaw and made the commitment to hang with him—and I’m vaguely conscious that an obit that mentions “Ducati” and “Valencia” would add a welcome final shot of panache to the CV of a man born in Belleville, Ontario. (The break-and-enter capital of Canada, stats prove.)

Mr. Test Rider releases the iron grip on his throttle as he passes a journalist but as I close on the hack I cannot take the luxury of lost time. I don’t want to wedge my snout inside his boot at the apex of a corner, so I take the outside line. But there really isn’t an outside line. I’m not sure if I’m catapulted out of the seat or if I voluntarily stand up (it happens so fast) but I know that I’m on the wrong side of the rumble strips. Which means a return trip back over the rumble strips and more time hovering above the seat, though this time I do not voluntarily stand.

It is with no small sense of satisfaction that I remain on the tail of the test rider, and follow him through the first left (I’m not bad), the second left (we’re in lock step), the first right (he’s wider) and then the hard right where I’m struggling. I slot into his tracks and he hacks the tail end loose and clips a crisp late apex that is a thing of beauty. And I do the same (more or less) including the tail surfing slide into the corner, which is the result of downshifting while leaned over under heavy braking. It’s fun—but slides, in my experience, turn to high sides as naturally as eggs to omelets.

At the end of the session I confess to the technician who is minding my bike that I’m uncomfortable with the sliding going into that corner. He stares at me and says nothing. I say it again but use my hands to gesticulate, so it appears I’m cutting a slice from a block of cheese. And then I remember that the 959 has adjustable engine braking, to, according to the press kit, “optimize vehicle stability in corner entry conditions by equalizing the positive, negative and retrograde torque forces applied to the rear wheel under severe engine braking conditions.” I ask the technician if he can lessen the engine braking. He responds in Italian as casually as if we’ve been speaking Italian all along. I mime a rear wheel spinning unencumbered by the engine’s force. Again he responds in rapid-fire Italian, and a passerby eavesdropping on our conversation would believe the two of us are communicating effectively when all we lack is comprehension of the other.

When the rider in the second wave who is sharing my bike returns to the pit, the technician and I lean over the dash and he stabs buttons and nods and again speaks rapidly. I would like to see proof that he’s understood me but he’s waving his hands telling me to get back on track, so out I go. As I dive into the first of the two lefts that precede the first right, I accept that if the technician is wrong this last troublesome right will not go well. Riding well is finding a rhythm, and if I approach this corner consumed with what may happen if the wrong buttons have been pushed it’ll surely ruin mine. So I buy in. I give trust. (And if the technician didn’t understand me, the bag of ice that will sit atop my snapped collarbone for the flight home will remind me of our miscommunication.)

I brake hard, downshift twice, trail the brake to a neat late apex and throttle up for the straight. A shot of pure happiness jolts me as if I’d undone a bra with an assured snap of my thumb and index finger with absolutely no fumbling. At the end of the session I grab my technician by the shoulders and thank him, and as our eyes meet I realize I’ve got the wrong man. But he smiles, nods, and answers me in Italian in a manner that would lead a passerby to believe we’re old friends.

As much a machine engineered to conform to ultra-strict Euro 4 emissions regulations as it is a new model, the 959 replaces the Panigale 899. (Euro versions receive an ugly twin pipe exhaust system but we North Americans continue with the Panigale’s signature under-engine silencer.) Euro 4-required mods that 959s receive regardless of market, resonance-deadening webs cast into cylinder head and engine covers and a silent chain to operate the valves. For a Ducati the engine itself is remarkably quiet though the exhaust retains the signature staccato bark.

Power and torque are up slightly vs. the 899, with a peak horsepower claim of 157 (a seat of the pants estimate would guess rear wheel horsepower in the 130s). While the 959 (actually 955 cc) appears as the 899’s doppelganger, the fairing is wider, the air intakes larger, and the windshield higher. The extra engine capacity is the result of a slight stroke increase (bore remains 100 mm). And though it seems trite to talk about footpegs, Ducati has finally made pegs that grip the boots properly and don’t cause feet to slip off like they’re resting on popsicles. And to correct a shameful omission on the 899 and add a feature that every expensive sportbike should have as standard, the 959 gains a slipper clutch. (Ah yes, money. The fetching $16,295 test bike is not white, as you might guess, but may be named after a Swedish porn starlet: “Arctic White Silk.” Roll that around in the mouth. For the less adventurous, Ducati red is $15,995.)

Our test is confined to the racetrack, so the 959’s fuelling in day-to-day snarled-traffic conditions remains unknown, but on the track it’s beautifully sorted. The progressiveness with which the throttle can be dialed on, allied to the lazy manner in which V-twins (or V-fours) generate power, makes the 959 confidence inspiring to ride. (Provided you keep it on the track.) But there is nothing casual about the bike’s speed, and I witness 159 mph on Valencia’s 800-metre front straight.

In addition to engine brake adjustability (which seems absurd up until it’s useful) the 959 is suffused with a full deck of electronic fortification. Bosch-sourced ABS has three levels of mindfulness that is intertwined with the riding modes (race, sport, or wet). Eight-level traction control allows either a firm grip on the proceedings or loosey-goosey freedom to surf the back end at will, and a quickshifter allows upshifting at a riotous tempo.

With an 888 and a 916 in the shed I am, admittedly, a Ducati man, but where old four-valvers demand an intense level of mechanical devotion, the Superquadro in the Panigale is a modern, low maintenance engine. Valve adjustment intervals are at 24,000 kilometres, which is, let’s face it, about as far as many Panigales will be ridden in their lifetime. The 959’s design makes clear a lineage back to the 916 and yet it’s not an overtly derivative clone as was the 1098 generation. And whereas my old Ducatis were built to suit riders of appallingly distorted proportion, the 959 is as comfortable while crawling about at speed as any modern Japanese sportbike.

But setting aside—as much as I can—my admitted fondness for Italian sportbikes, the Panigale is a special machine. Perhaps it’s the fusion of tradition and technology: the 90-degree twin hung from a monocoque airbox that’s no larger than a breadbox, or the howling engine tempered by modern electronics. Indeed, the beauty of the sportbike is that it demands function that won’t be served by nostalgia. Amen for that.